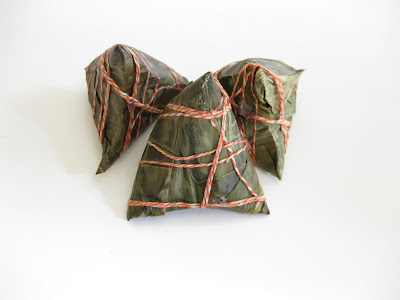 In honor of Dragon Boat Festival (Duan Wu Jie), I am dedicating a post to the delicious Zong Zi that are eaten to help celebrate this holiday.

In English, the day is nicknamed Dragon Boat festival because traditionally, the day is celebrated with dragon boat racing.  Boats are built to look like dragons and there are many racing competitions.

While this is mainly a food blog, I'll briefly go into the origins of this holiday- at least the stories I have been told growing up.  The story I have heard is that it relates to the the suicide of Qu Yuan, who was a famous poet and scholar.  I don't know too much about ancient chinese history, but my understanding is that he was an officer for the Chu royal house during the Zhou Dynasty.  When the king decided to align with the state of Qin, Qu Yuan opposed the alliance and then was accused of treason and banished.  When Qin conquered Chu, Qu Yuan committed suicide by drowning himself in the Miluo River.

As the story goes, the local people threw food in the river to feed the fish so that the fish would not eat Qu Yuan's body.  The food was the zong zi.  Local people also paddled boats to scare away the fish, which is where the dragon boat racing came from.

I've never made my own Zong Zi.  My mom used to make it when she was little.  It is basically a glutinous rice dumpling that is wrapped in bamboo leaves.  There are various different fillings that can be found in these dumplings.  But almost all of them use a very sticky rice and then have some sort of filling with the rice. You can buy them frozen, fresh, or even vacuum packed.  There are both sweet and salty versions of this snack.  Different asian countries also have different fillings for these dumplings.

The sweet ones I am most familiar with are ones filled with red bean paste.  I've seen these sold in vacuum packages, that can last over a year and don't need to be refrigerated or frozen until after opening.  It's pretty amazing how technology has advanced. I'm not a huge fan of the red bean paste ones, so I don't have any pictures of them. 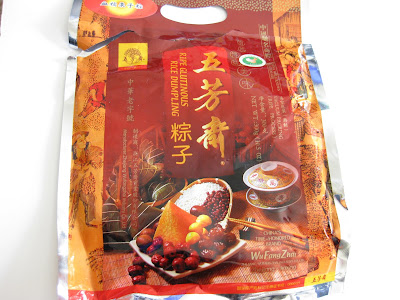 The ones in the vacuum packs tend to be small, like bite sized versions of the traditional zong zi.  This one uses red glutinous rice flour and has some chestnuts inside as well. It's salty in taste.  I liked this one.  The rice is very sticky, not too salty.  I like how small they are, making a perfect snack size.  Sometimes it's hard to finish a big one. 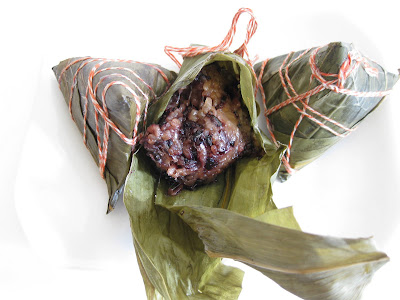 At Ranch 99, I purchased some frozen ones.  This one is has a filling of mushrooms, peanuts and egg yolk.  I wasn't particularly fond of this one.  I prefer ones with meat.  The mushrooms didn't add enough taste for me and the yolk did not have much flavor. 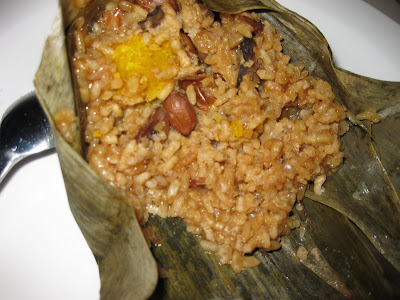 The most traditional one I am used to eating is one filled with pork, mushroom, peanuts and sometimes egg yolk.  However, when I went to Ranch 99, they were out of those.  I did however, buy some frozen seafood ones. 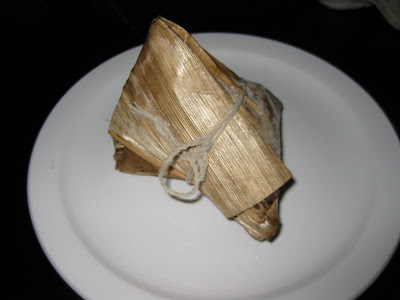 This is my first time trying the seafood ones.  I really enjoyed them.  There were little dried shrimp, a piece of abalone, scallop, and some other little bits of seafood mixed with the rice.  When I read the ingredient list, I was doubtful about the abalone they claimed to  be in it,but sure enough there was a decent sized piece of abalone in the middle of my zong zi.  A pack of 5 large seafood zong zi were being sold for $10 at Ranch 99. 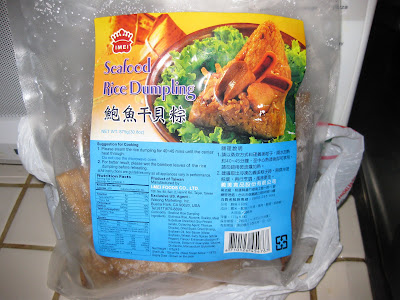 The best way to cook zong zi is to steam them.  Put the desired quantity into a steamer, and steam for about 10 minutes, or until thoroughly cooked inside.