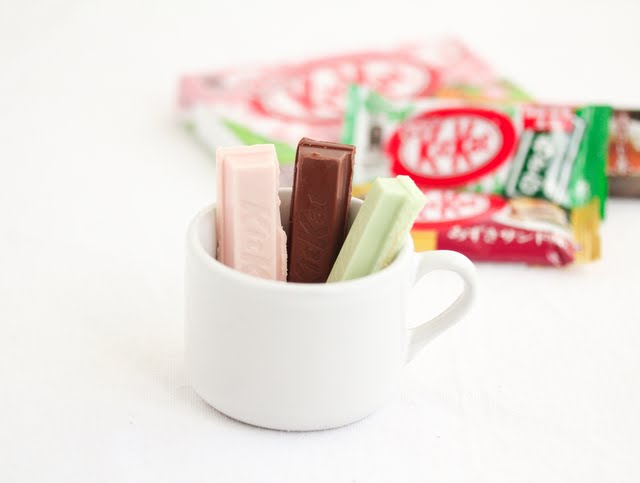 You might recall, one of my interests is seeking and trying out different kit kat flavors from Japan. I did a post here, documenting ones I’ve found and tried.

Last week I received an incredibly kind gesture and gift.

A few weeks ago, I was checking my twitter feed, when I saw a tweet by Kaoru of Never Turn Down a Cupcake.  She tweeted that she had just received a package from her mom with kit kat flavors from Japan like wasabi and red bean.

When I saw her tweet, I tweeted back that she was so lucky to receive them, and they are both flavors I hadn’t yet tried. Then a minute later, she tweeted that she had more than enough and was willing to share. I was so surprised and touched by her gesture.

K and I follow each other on twitter and share some comments on blog posts, but other than that, we don’t have much communication. The fact that she was willing to share her kit kats with a virtual stranger was unbelievably sweet and selfless on her part. Especially when she also had to take the time to package and ship them.  Her generous offer pretty much made my weekend. 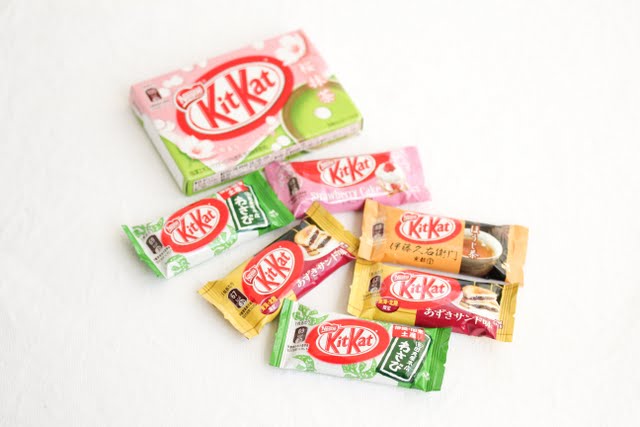 A few days later, this assortment of kit kats arrived. I had thought she would just give me one wasabi and one red bean, but she ended up giving quite a few, along with a note on super cute paper identifying all the flavors. I was like a giddy little girl on Christmas. It took all my willpower to snap a quick picture of a few of them before digging in and trying them all out. 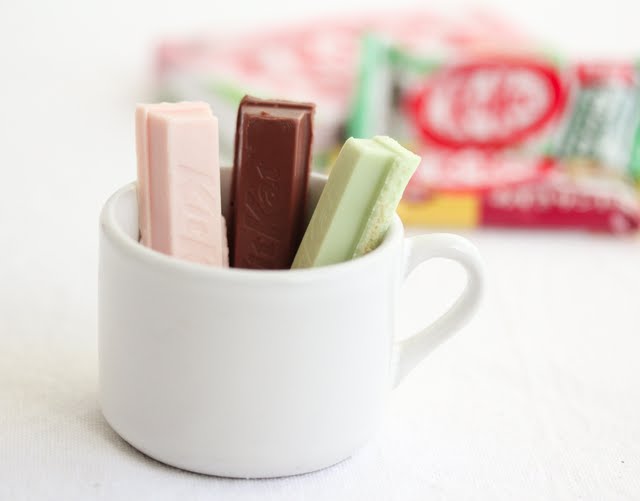 The wasabi one was the one I was most curious about. It is a light green color (far right in the cup). The packaging is the green one with the picture of wasabi plants. The kit kat was really sweet, with just a tiny hint of wasabi. It was a bit sweeter than most kit kats, probably to counteract the wasabi. I actually expected to taste more wasabi, but it ended up being pretty light.

Red bean/azuki. The red bean one is the one with the package of a picture of a hot cake stuffed with red bean with a bite missing. The actual kit kat was brown (middle one pictured in cup), making it look like a regular chocolate kit kat. I could definitely taste the red bean. It had a much stronger flavor compared to the wasabi.

Strawberry cake. This is the light pink packaging and the pink kit kat in the cup. So pretty! It tasted like strawberries and cake.

Hoji-cha tea. Brown packaging, light brown kit kat (far left one in cup in bottom photo). This one I wouldn’t have known what it was if it wasn’t for K’s note explaining it. The tea flavor was quite strong. I thought this was the most intense in flavor of the kit kats I sampled. But I actually really liked this one. Probably because I love drinking tea, especially Asian tea variations. 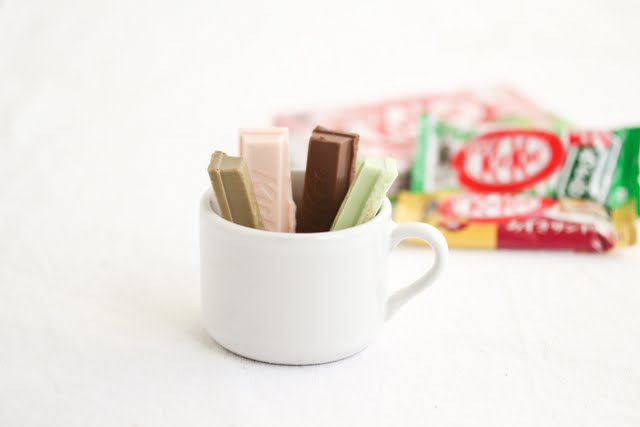 Finally she gave me a full size pack of four green tea kit kats. I adored the packaging.

Thanks again K for the very kind gesture. You not only made my day when I received these, but you also helped me along my hobby/goal of collecting and trying as many flavors of kit kats as possible.

19 comments on “Kit Kats from Japan”