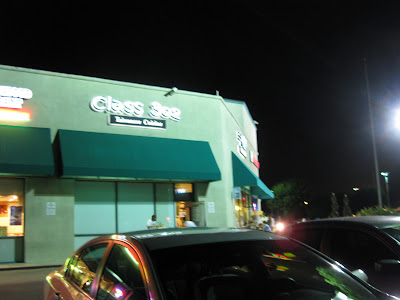 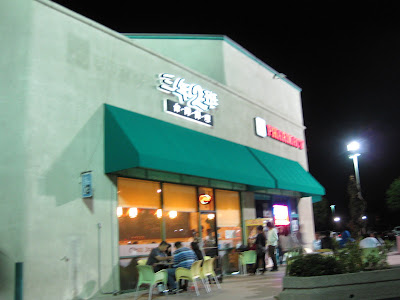 A few weeks ago, we made a roadtrip to LA where we experienced snowflake shaved ice for the first time at Pa Pa Walk.  The shaved ice is shaved so fine that it doesn’t even seem like ice anymore, and mixed with condensed milk, it tastes almost creamy like ice cream. We absolutely loved it. I did some research and got some suggestions from other foodies and learned that Class 302 in Rowland Heights is supposed to have the best snowflake shaved ice.

I’ve never been to Rowland Heights and decided we needed to take a trip. Boyfriend has never been a huge fan of shaved ice, but the snowflake shaved ice had a big impact on him as well. The entire road trip, he kept asking when we would be eating shaved ice.

Class 302 was really small. Much smaller than any other cafe of the same nature I’ve ever visited.  I was surprised at how small it was considering how crazy popular it is. It can only seat about 5 small tables. Next time I go, I would like to go earlier in the day when it’s not so full.

We ordered two shaved ices as we had four people. The shaved ice here was definitely cheaper than the one we had at Pa Pa Walk. It’s $6.25 for one. We got a mango shaved ice and a green tea shaved ice, both which are quite popular. 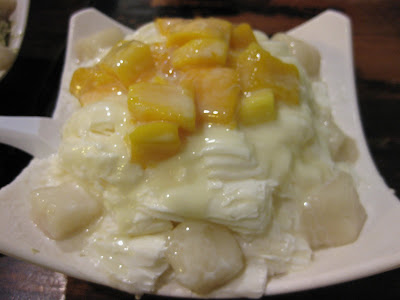 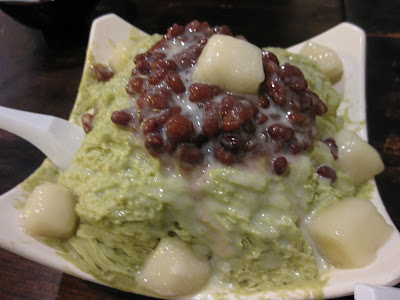 There were a lot of other things on the menu that looked tempting, but I stayed focused and stuck to ordering the shaved ice.

The set up of Class 302 is interesting. To match the name, the place is set up to look like a classroom. There is a huge chalkboard, some fake textbooks, and the tables are school desks. There was also a tv that was playing Dorimon cartoons in the background.  The Dorimon cartoon brought back memories of Taiwan, as the cartoon always seems to be playing when I’m in Taiwan. The books also gave me a sense of nostalgia. While I never attended school in Taiwan, one of the books reminded me a lot of one I used when I took chinese school when I was younger. 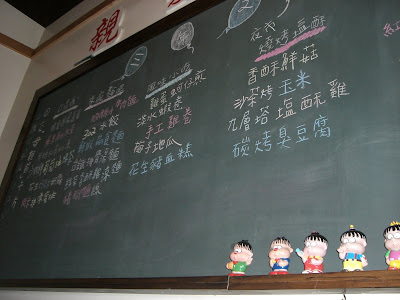 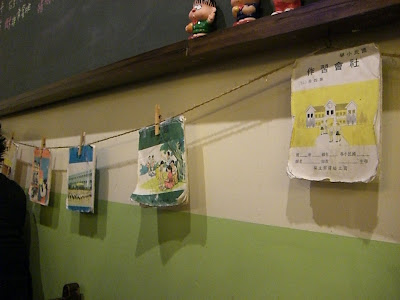 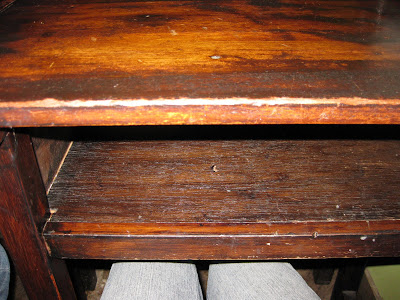 The shaved ice definitely looked different from the snowflake ice I had at Pa Pa Walk.  The ice comes out in sheets. But it’s still really soft once you eat it.  I think the one at Pa Pa Walk actually was a bit softer, but this one was good as well.  I love that the ice doesn’t melt fast. Usually shaved ice melts so fast, but because the snowflake shaved ice isn’t pure ice, but is instead mixed with condensed milk, it melts a lot slower. 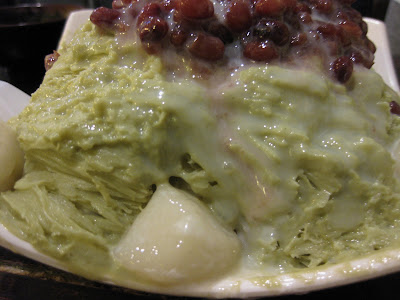 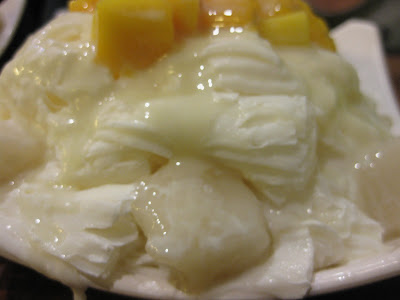 My favorite was the mango. Boyfriend ate almost the entire thing by himself. I wasn’t as much of a fan of the green tea one. Normally I love green tea, but this one didn’t seem sweet enough. The green tea one was topped with sticky rice balls and red beans. 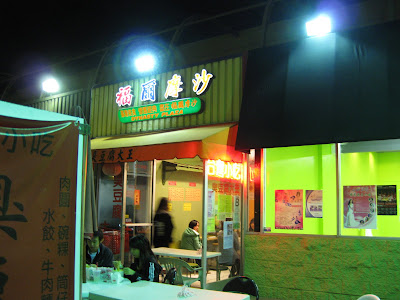 There’s a lot of chinese dishes that can be very unappealing to those not used to chinese cuisine. Perhaps one of the most unappealing is stinky tofu, due to its pungent odor.  However, I love stinky tofu, which is a classic Taiwanese street food item.  The tofu is fermented, giving it a great flavor but also causing the smell.

The problem with introducing stinky tofu to other people is that the stinkier it is, the better it tastes. Ones that don’t have the pungent odor aren’t fermented as well, so the taste it creates isn’t that appealing.  Stinky tofu is usually served fried, dipped in a savory sauce and eaten with pickled cabbage.

I haven’t found great stinky tofu outside of Taiwan. Tofu King got rave reviews. It was difficult to find. First, despite being called Tofu King, the sign says differently.  The sign says “Dynasty Plaza” If you can read chinese, the words tofu king are written in chinese only, on the orange curtain below the giant sign that says something different in chinese and English. The only reason why I knew we were in the right place is the smell. From two stores down I could smell the tofu.

The store is quite small and only has some seating outside. It definitely had the feel of the street food in Taiwan. There were quite a few street food items on the menu, but I stuck to ordering the stinky tofu. We got two orders to go and then ate them in the car because it was chilly outside. 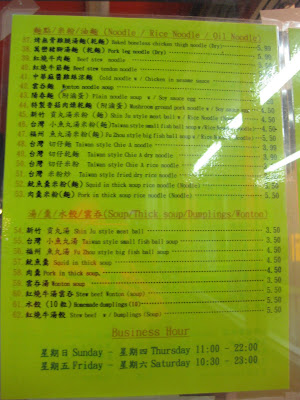 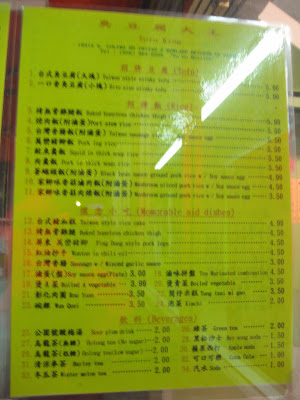 For some reason, they don’t completely cut the tofu. Instead, we were given three large pieces of fried tofu, sauce and the pickled cabbage. The tofu was delicious. The closest I’ve had to the ones I’ve eaten in Taiwan. I was really impressed. Boyfriend loved it too and he usually is not a fan of stinky tofu. 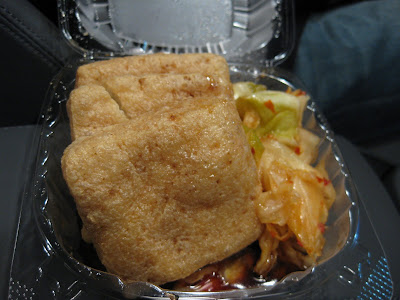 Boyfriend loved the shaved ice and stinky tofu so much he talked about wanting to pay a visit on the way home from his parents’ place because it’s “on the way.” Except it isn’t. It’s an hour detour. In an hour and half drive. I’m happy to see Boyfriend becoming quite a foodie though. 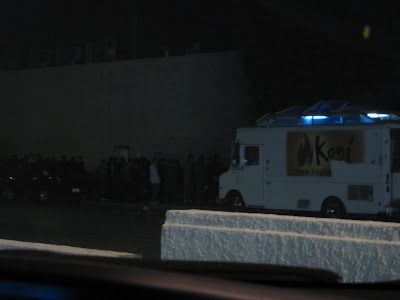 For a while now I’ve been following the Kogi bbq taco truck through twitter. I’ve wanted to try it for so long. Korean bbq meat served in a taco sounds so good. But of course Kogi is usually in LA and Irvine and I’m not there. But I realized Kogi would be in Rowland Heights that night. So we planned on getting there right when it opened and hopefully catching the truck.

On a sidenote, we kept seeing other food trucks while in the area. So different from living in San Diego. When we got to the taco truck, we were shocked by how many people were already there. It hadn’t yet opened and there were already over 100 people in line! I knew kogi was popular, but I had hoped that by arriving early I could have avoided most of the crowd.

We were so close to the kogi truck, yet so far. They didn’t open up for business until almost 11:30 pm. And we needed to get back to San Diego. So we ended up not getting any tacos that night. Another time, Kogi truck.