Boyfriend and I had a chance to check out the San Diego County Fair this weekend, one of my favorite events.  Every year I look forward to this time, eagerly anticipating what the "new foods" offerings are at the fair.  We usually like to go to the fair with friends, so that we can sample lots of different foods.  We'll probably be back at the fair again before it ends to try some more stuff.  Because we had dinner plans, Boyfriend and I didn't want to overstuff ourselves, but we were able to try quite a few items.

Up first, Chicken Charlie's, which is known for coming up with all sorts of new deep fried creations every year. 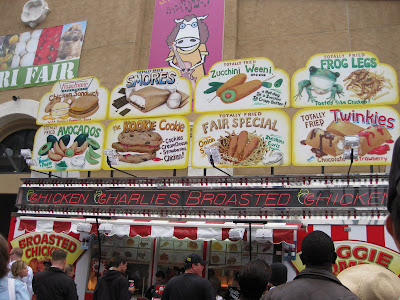 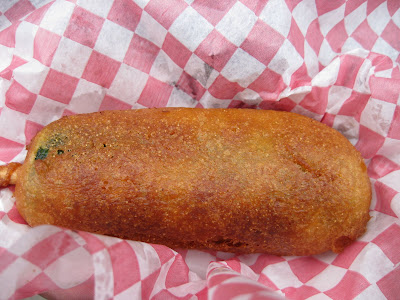 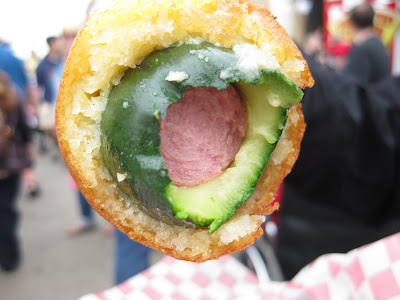 I wasn't that impressed.  It was basically a hot dog tucked inside a whole zucchini and deep fried.  Deep frying didn't really change the texture or add anything to the taste.

The kookie cookie seems even weirder than the krispy kreme sandwich.  A chicken sandwich with oatmeal cookies and strawberry sauce.  We might try the deep fried smores next time.

The Texas Tater Twisters is something we've never seen before at the fair. We didn't try any, but it's on our list for our next visit. 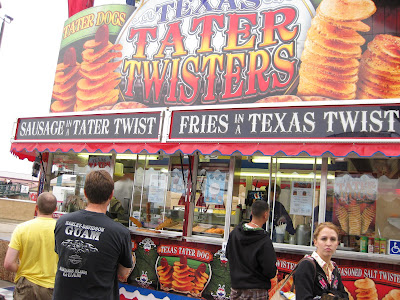 Of course we had to stop by Juicys, which has the Great western sausage, one of our favorites. 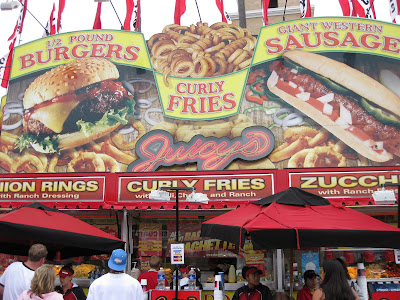 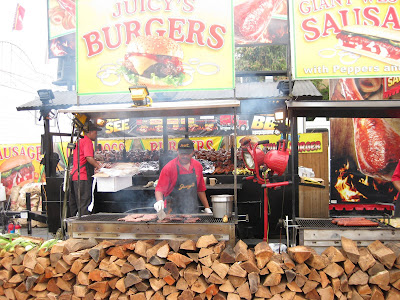 The giant western sausage is huge.  It looks to be a little bit more than a foot long.  The sausage is thick and spicy. Yum!  It is served with grilled onions and peppers on a delicious bun. 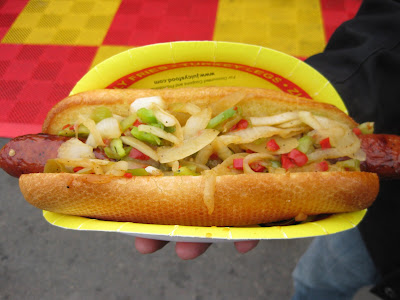 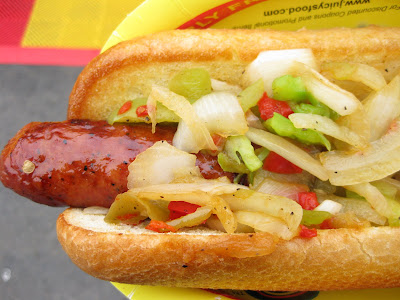 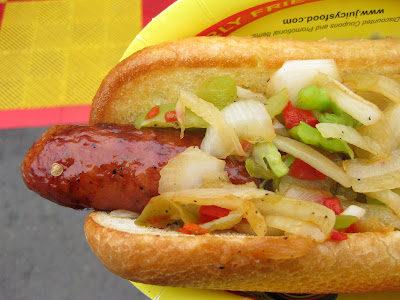 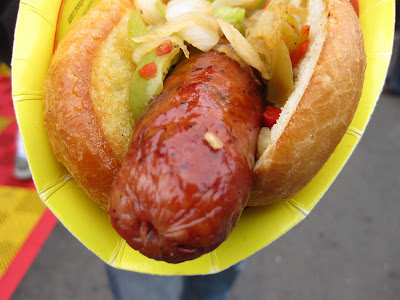 As always, the sausage was delicious.

We then decided to try the Mexican fried ice cream. 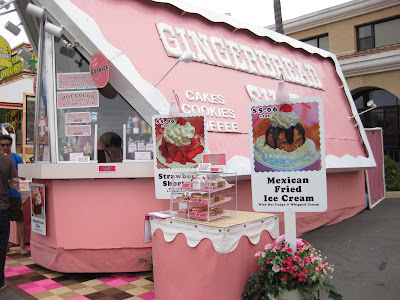 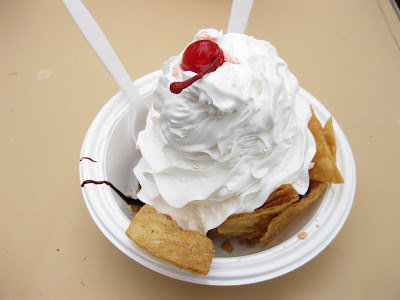 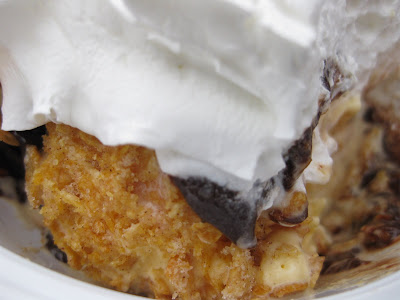 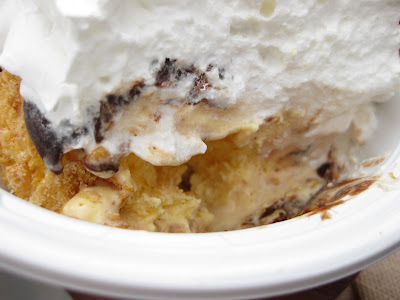 This was pretty good.  The ice cream has a crunchy fried layer on the outside, lots of whipped cream on top, some tortilla chips on the side.  Served with a chocolate sauce.

Some other new items this year were the Mexican funnel cake and the
Chocolate covered bacon. 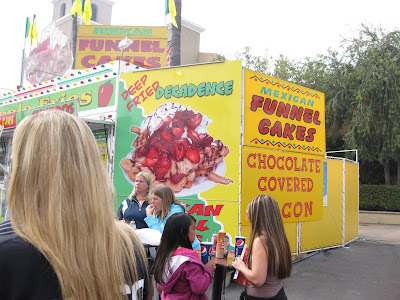 I wanted to try the funnel cake; a lot of people had it and looked to be enjoying it.  But it was so big, and Boyfriend and I didn't think we would have room.  The Chocolate covered bacon was getting a lot of buzz.  There were signs near information booths saying to stop by to ask where to get the chocolate covered bacon.  I thought it might be interesting.  After all, I've seen bacon used in desserts before.

The bacon came out of the freezer, in a chinese takeout container. 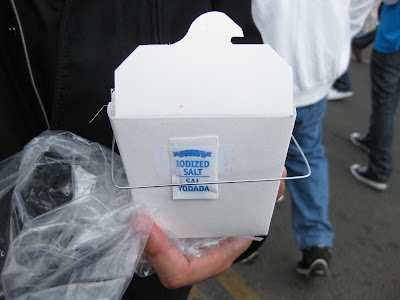 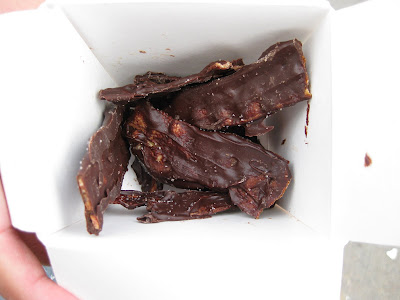 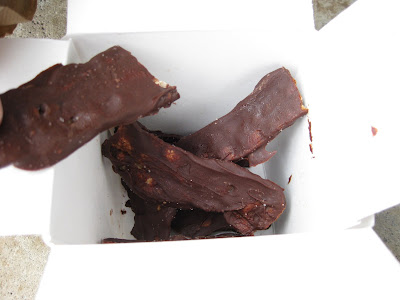 Verdict?  We were not fans.  The chocolate is overwhelming in taste so you don't taste the bacon at all.  And for some reason, they decided to sprinkle the chocolate with salt.  I did not like salt with my chocolate.

One of my favorite fair foods is the bbq turkey leg.  I love how big it is and how it resembles the drawings of turkey legs you see in comics and cartoons.  It also tastes pretty good as well.  However, it's always so hard to finish.  There is one vendor that makes really good turkey legs.  We didn't see that vendor in its usual spot and assumed they weren't around this year.  So we decided to get a turkey leg from Juicys. 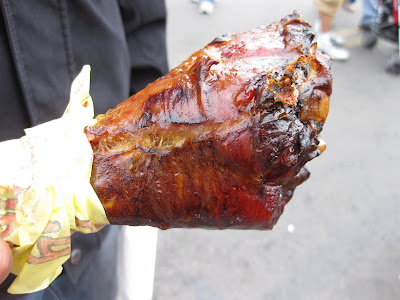 The turkey leg was a lot smaller, a bit too salty and didn't come with the bbq sauce.  I was disappointed.  When we were about to leave the fair, we saw the place we usually get our turkey legs from!  I would recommend that place.  I forgot the name.  Tony's famous giant turkey legs, or something like that.

Finally, we ended with a chocolate dipped ice cream with sprinkles. 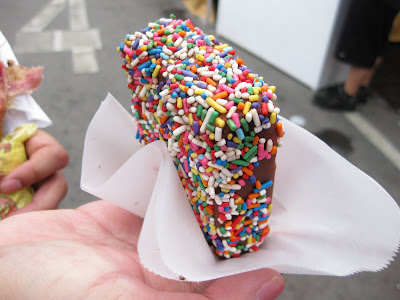 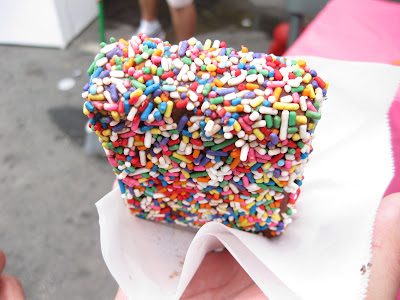