After a revisit to Din Tai Fung, I had to make a stop at Sinbala again.  My previous Sinbala post can be found here. Boyfriend and I were really full, so we just got some stuff to go.  I ordered a sausage rice combination, an oyster pancake and their eight topping shaved ice.

The to go shaved ice came in two separate containers: one container with the ice, the other with all the toppings.  This allows the shaved ice to last longer during the car ride, as the toppings tend to melt the ice quicker.  Here is a quick picture of the toppings container: 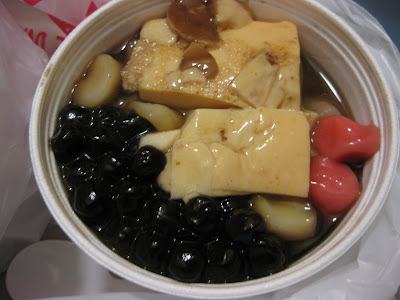 Here is the sausage rice combination: 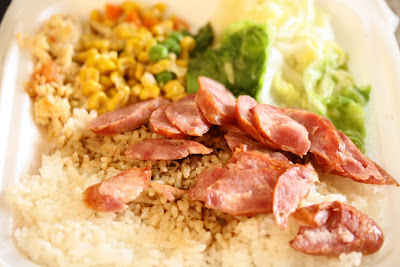 I enjoyed this a lot.  I wish I had a better picture.  The chinese sausage was good and there was a good amount of sausage in the combo.  There was also some sauteed cabbage, corn, and tomato and egg.

Here's a close up of the sausage: 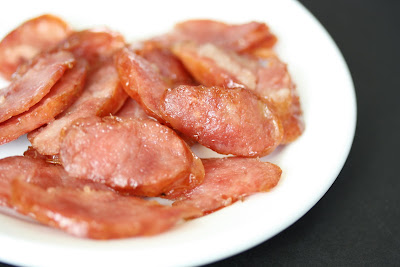 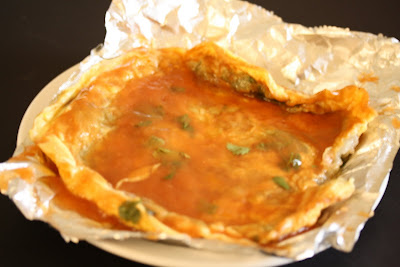 A little too much sauce, but I thought this was a pretty decent version of oyster pancake.  There was a good amount of egg and the sticky starch substance that is in oyster pancake.  Sometimes restaurants make it so that the starch material is too much and there is barely any egg.

While I was paying for the food, I noticed that Sinbala also sells their delicious sausages, meatball and some other Taiwanese goodies uncooked.  I think next time I'll get some meatballs and other items uncooked so I can bring it home and make it.