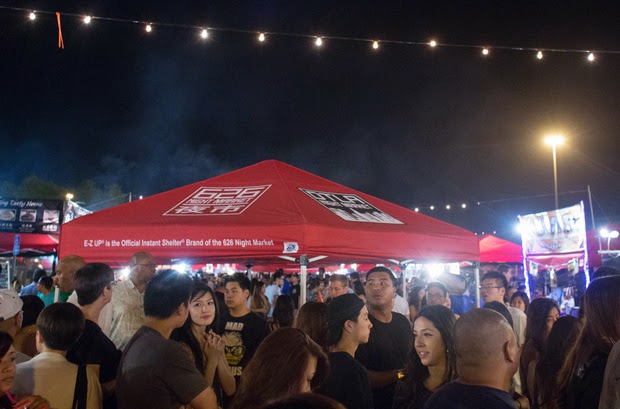 Two years ago, the 626 Night Market debuted in Los Angeles, inspired by the night markets found in Asia, and especially Taiwan. After great success, they’ve continued on, expanding to Orange County and downtown LA as well, and holding multiple sessions each summer. The main location is the Arcadia one.

We happened to be in LA visiting friends during one of the weekends they were holding the 626 Night Market in Arcadia, and I was very eager to check it out. One of the highlights from my trips to Taiwan have always been the night markets. (There is one more session in September for those interested in attending.)

The Arcadia one is held at Santa Anita Park. It’s a mere $3 to get in, and if you park in the back parking, there is no parking fee (it’s $6 if you park in the front). I was impressed with the number of vendors, which was much greater than I expected. The crowds were pretty heavy, but we also went during peak hours. If I have a chance to go again, I’d go earlier before the dinner crowd. 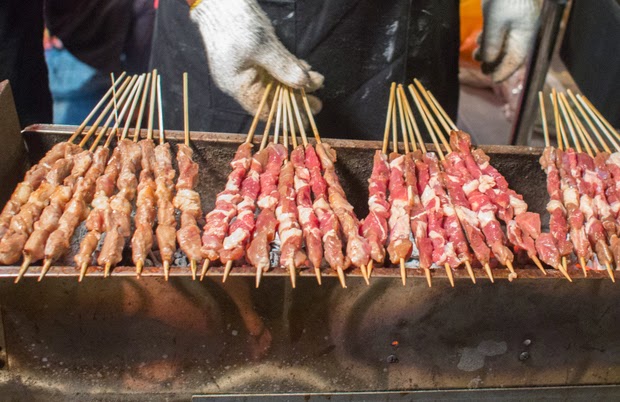 The food prices were pretty reasonable, especially compared to the horrible first night market that San Diego attempted last year. We actually had a pretty good time browsing all the vendors and trying out different foods. Since we had a large group, it made it nice for sharing. Here are some highlights: 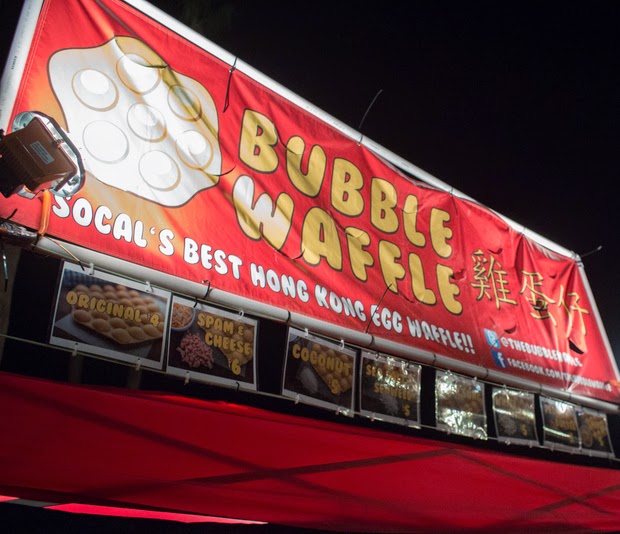 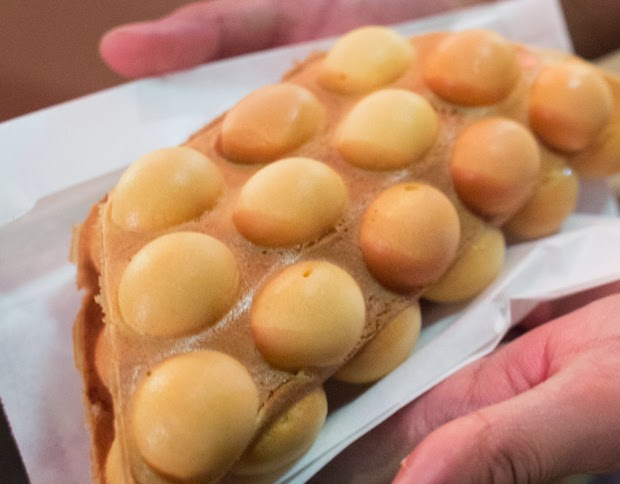 I love bubble waffles (also known as egg waffles, egg puffs, eggettes). It’s a popular item in Hong Kong and I’ve had a hard time finding a decent rendition here, but the version at this vendor was surprisingly good. Crispy on the outside, sweet and fluffy on the inside. This is such a fun dessert to eat since you break off each little piece. 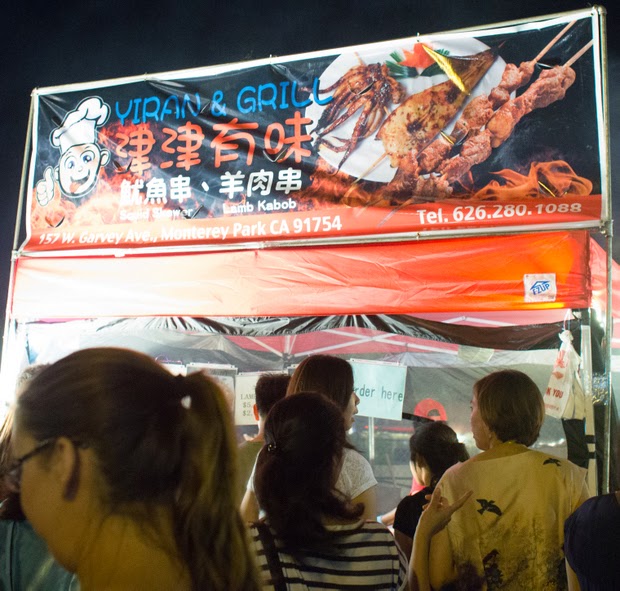 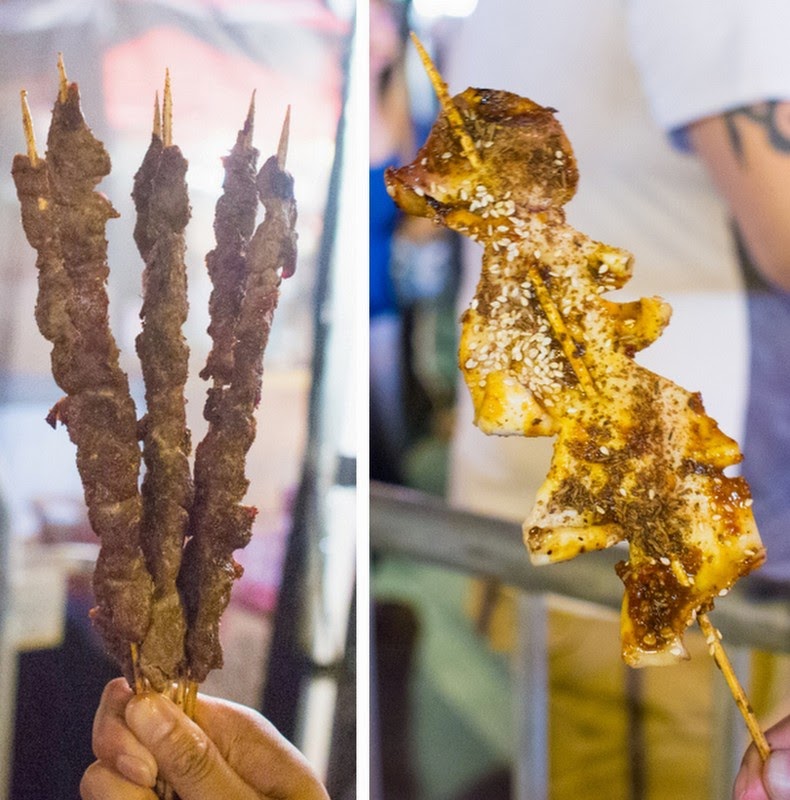 Lamb skewers and grilled squid were very popular items that we saw offered by several vendors. We randomly stopped by this one when we first arrived and we enjoyed it enough to stop again right before we left. 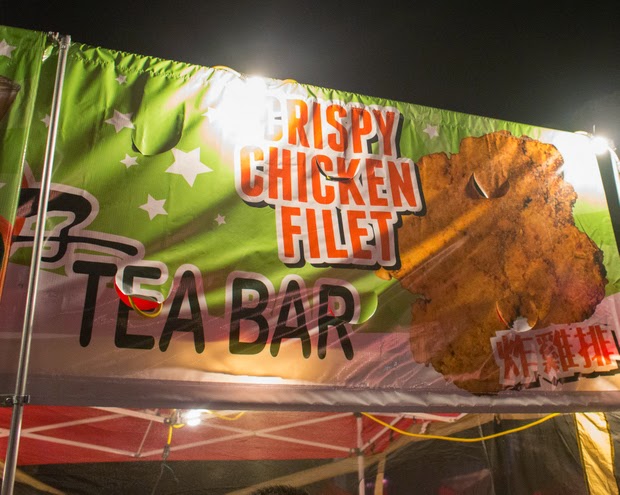 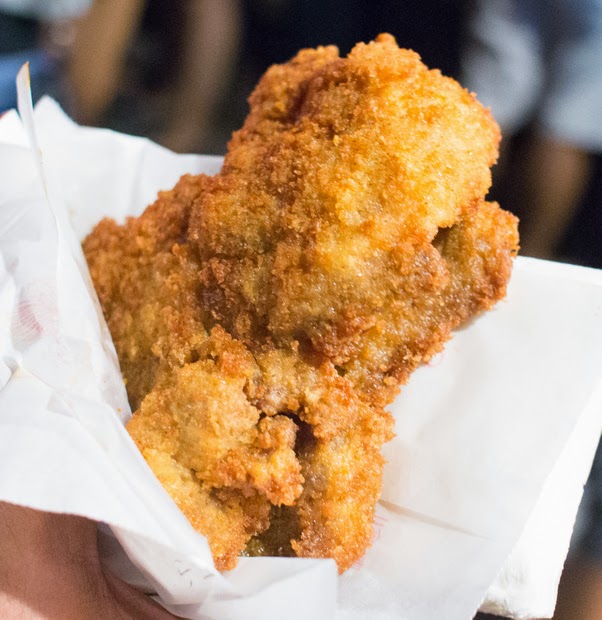 It’s hard to tell, but this was an enormous fried chicken fillet. Unfortunately, they folded it in half before handing it over, making for a much less impressive photo. I actually didn’t really enjoy this one. I found the breading to be gummy. 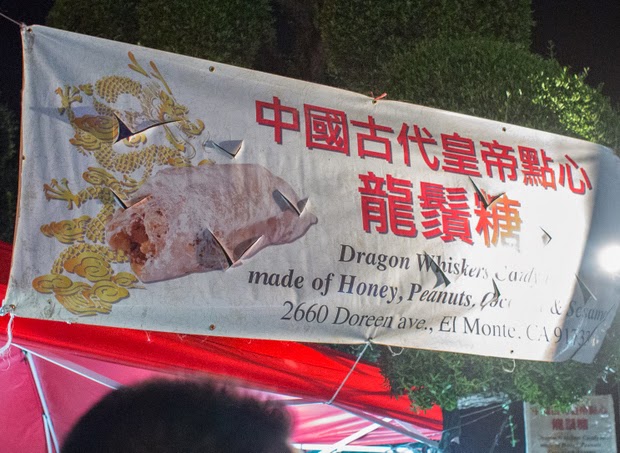 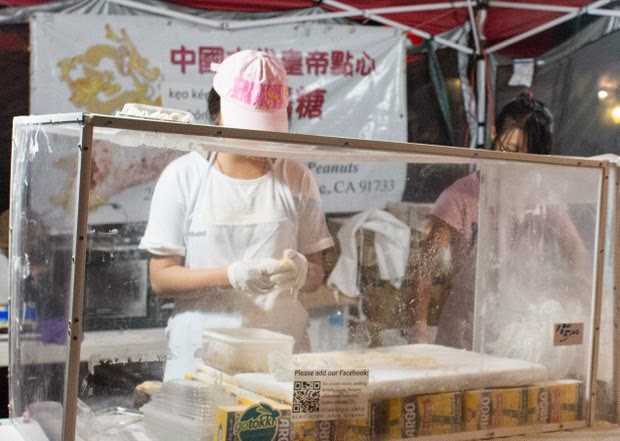 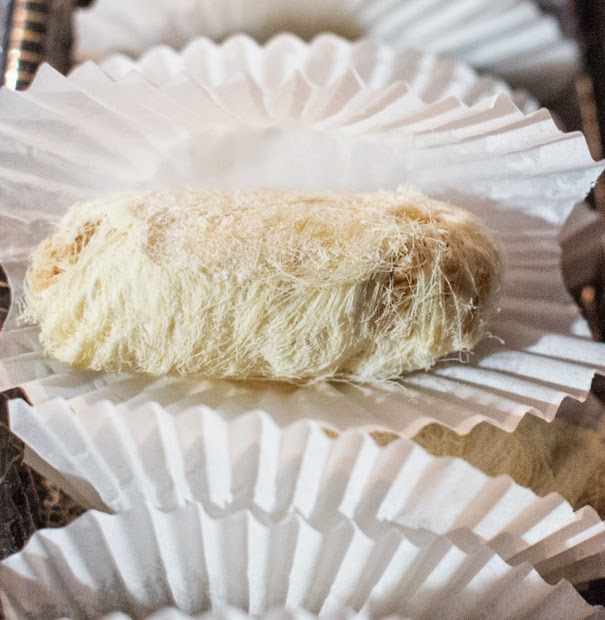 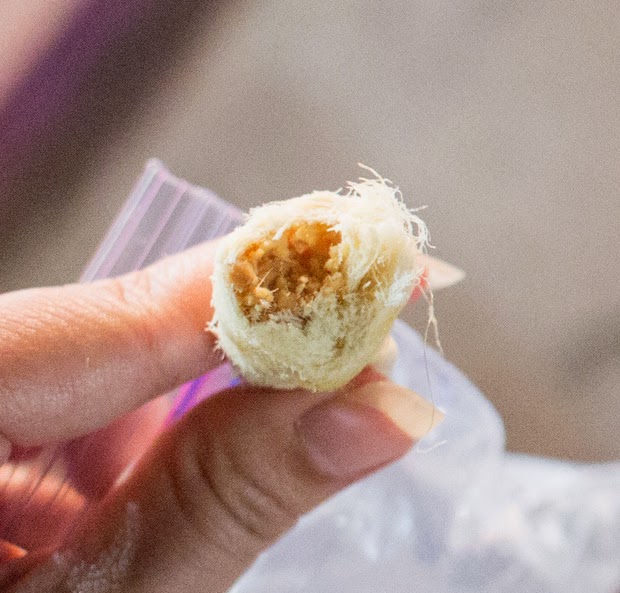 Fresh made dragon whisker candy is always a treat. The name comes from the appearance because the threads apparently resemble dragon whiskers. The inside has different fillings, we got the sweetened crushed peanut filling. 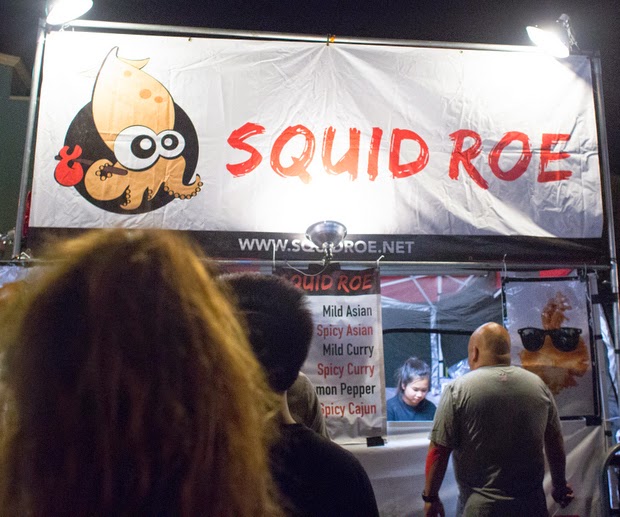 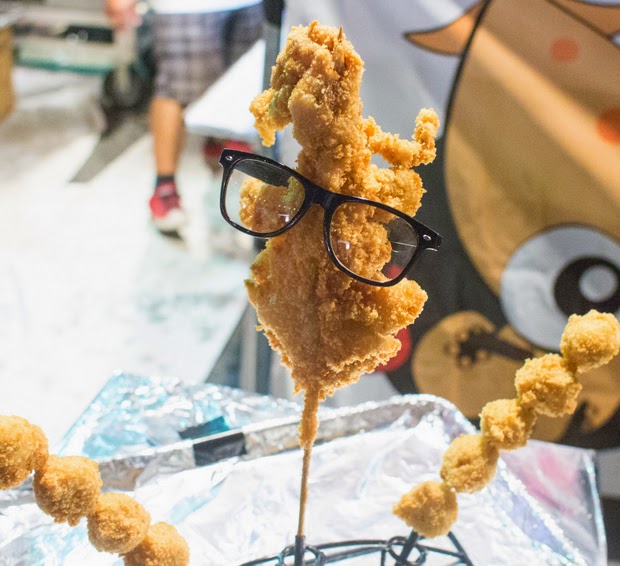 We didn’t actually try this one but I had to take a photo. We thought about getting it, but after the deep fried chicken, I was worried the squid wouldn’t taste very good. 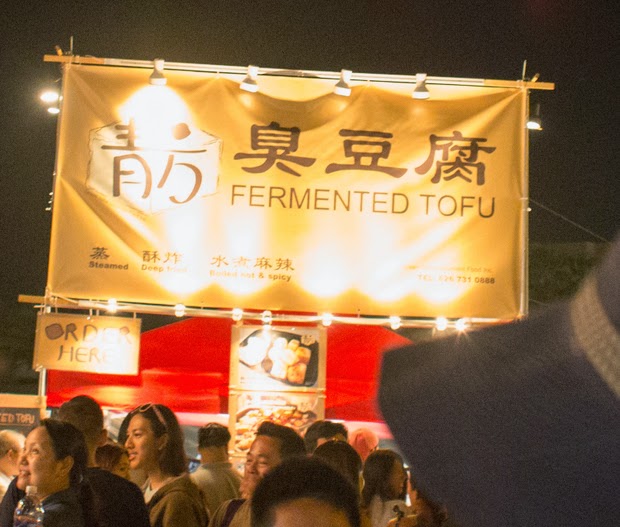 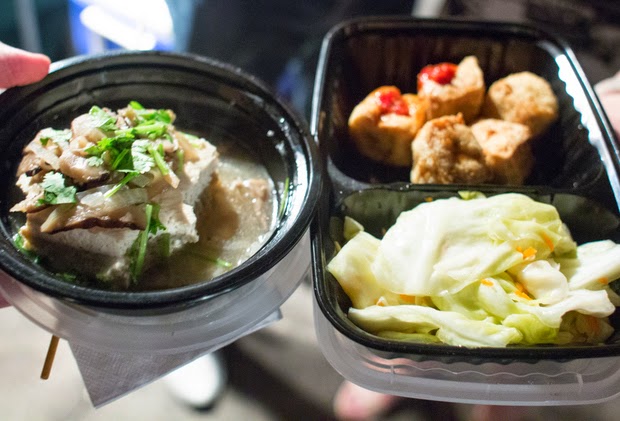 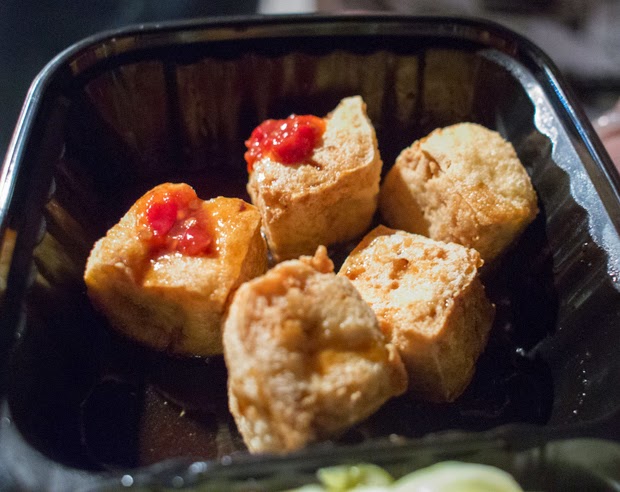 Stinky tofu is a classic at Taiwanese markets. There were only a few vendors selling it, probably because the smell can be offending to some. This vendor offered both a steamed and a fried version.

Here are some of the other vendors available: 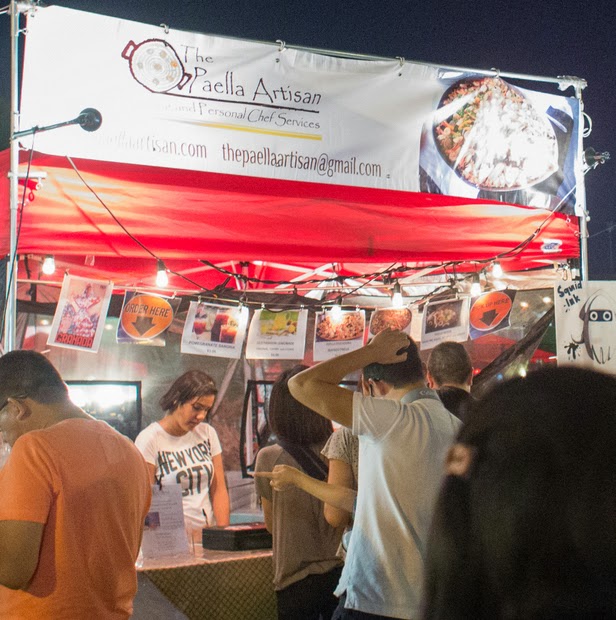 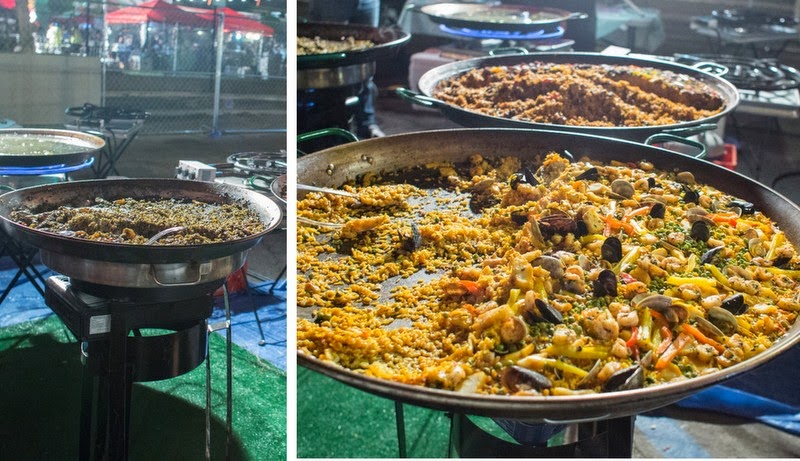 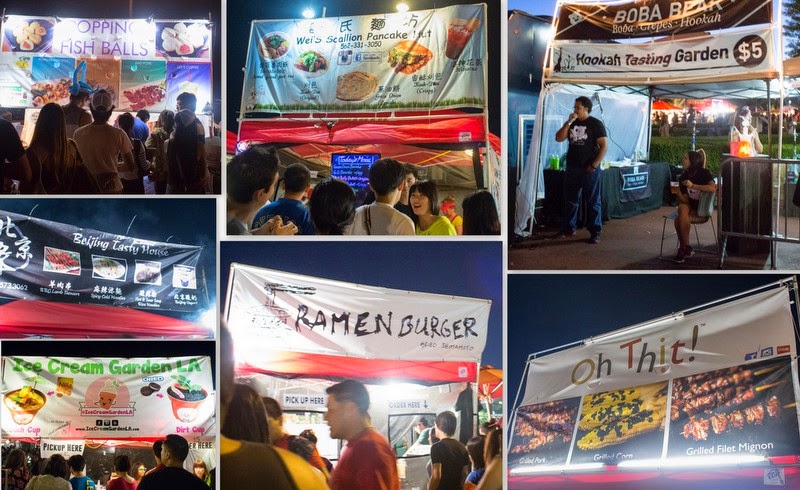 I don’t even know what was being sold here, but Mr. K insisted I take a picture:

Overall, we had a good experience here. It was crowded, so I advise that you go earlier to avoid the crowds. The prices were decent, the variety of vendors was plentiful, and it was a fun experience. It doesn’t substitute the night markets in Taiwan, but I was pretty impressed with the organization and the vendors. They even have a phone app so you can locate your favorite vendors while you are at the market.

They have one more scheduled at the Arcadia location for September 12-14, and then it’s farewell until next year.