Artisan Noodle Tatsuki is a new ramen shop that recently opened in San Diego. The chef trained for several years at the very popular Tsujita LA (my favorite place for tsukemen) before coming to San Diego to open his first restaurant. Given how much we love Tsujita LA, we were very excited to try out this new spot. 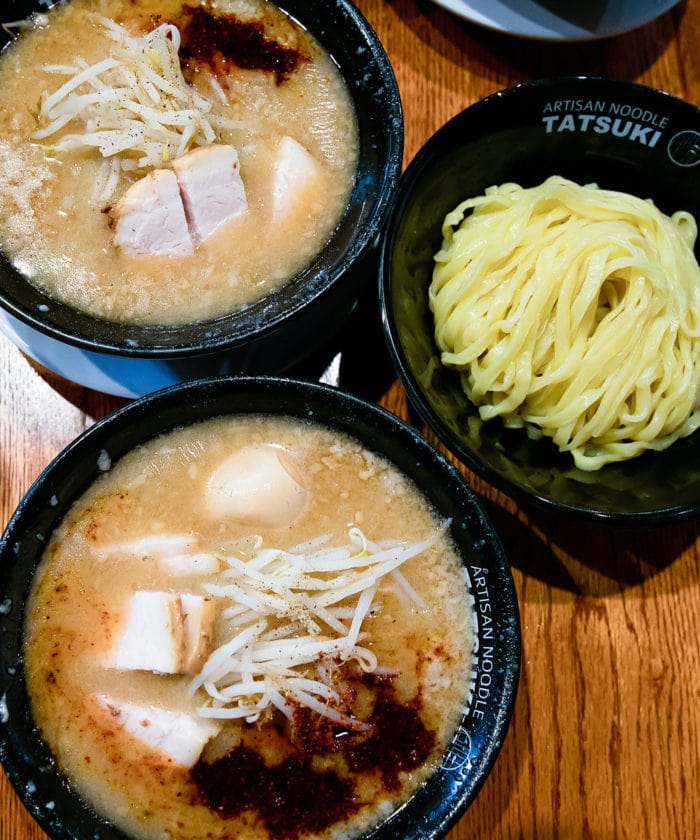 The restaurant is located just two doors down from another favorite restaurant of mine, BIGA. 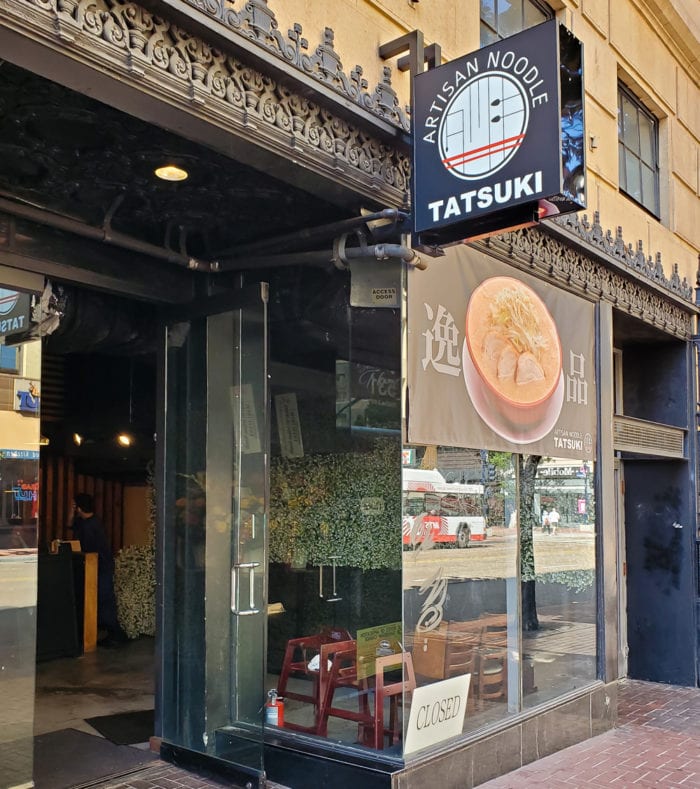 The restaurant offers two kinds of ramen and tsukemen. For those unfamiliar with the styles of ramen offered here, there are plenty of printed graphics and instructions. 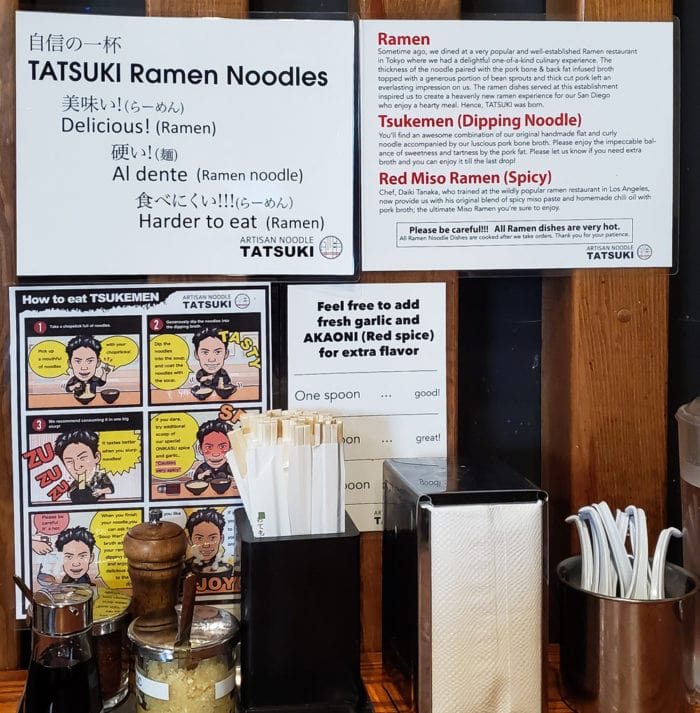 Of course, we had to get the tsukemen. I ordered the regular size with soft boiled egg and Mr. K ordered one without anything extra. 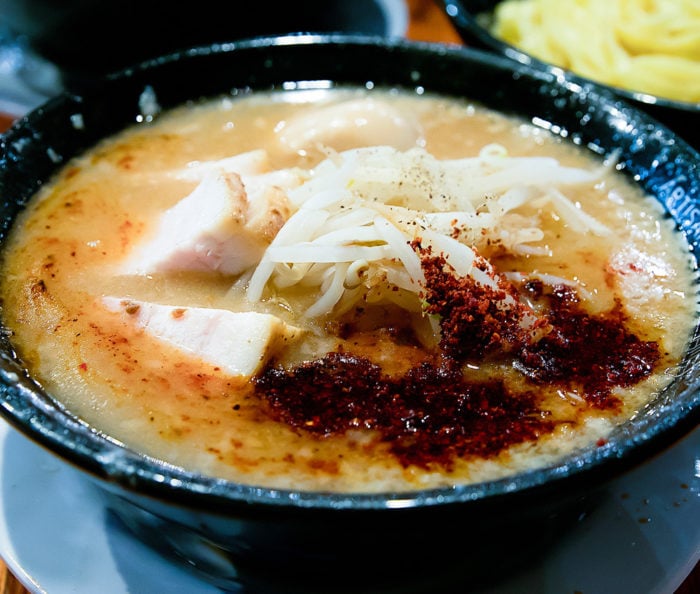 Tsukemen consists of a bowl of concentrated broth with noodles served on the side. You dip the noodles into the broth before eating them. At the end of your meal, you can request hot water be added to the broth so that you can drink it. 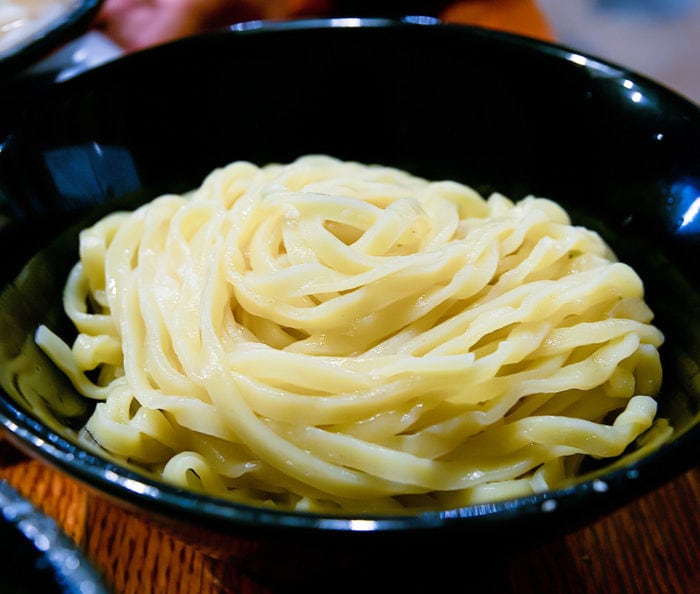 The noodles are wide and slightly wavy. The size and shape of the noodles made them ideal for coating the concentrated broth.

The broth was thinner and lighter than the version at Tsujita LA. It had a nice garlic flavor and spice to it. You’re encouraged to add more garlic and more of their akaoni red spice to your broth to increase the flavor. There are a lot of bean sprouts inside the bowl as well.

While we weren’t expecting the tsukemen to taste exactly like the version at Tsujita, we were hoping that it would be similar and satisfying enough that we no longer would have to drive to LA to satisfy our cravings. I enjoyed the tsukemen broth here but I still prefer the rich, savory broth at Tsujita LA.

Tsujita LA also has a sister restaurant, Tsujita Annex, which is located across the street from Tsujita LA. I’ve never eaten there because my friends insist Tsujita LA is better, but I’ve heard that Annex’s version uses a lot more bean sprouts, so I do wonder if this version is more like the Annex version. 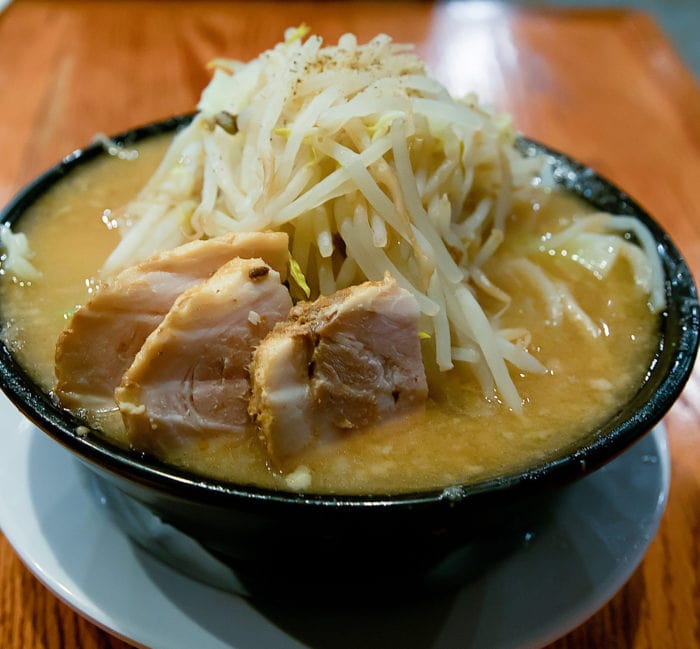 We also had to try the tonkotsu ramen. Tonkotsu ramen broth is prepared by boiling pork bones for many hours until the broth turns cloudy and milky.

The ramen arrived in a small bowl but the size is deceiving. The bowl was filled to the top with noodles with a large pile of sprouts sitting on top.

The tonkotsu here reminds me a lot of Tsujita LA’s version. When I first had Tsujita LA’s tonkotsu, I thought it was the richest, fattiest broth I’d ever tasted. This version is just as rich. The flavor is wonderful but it’s very heavy and filling, which is likely why the portion is smaller. 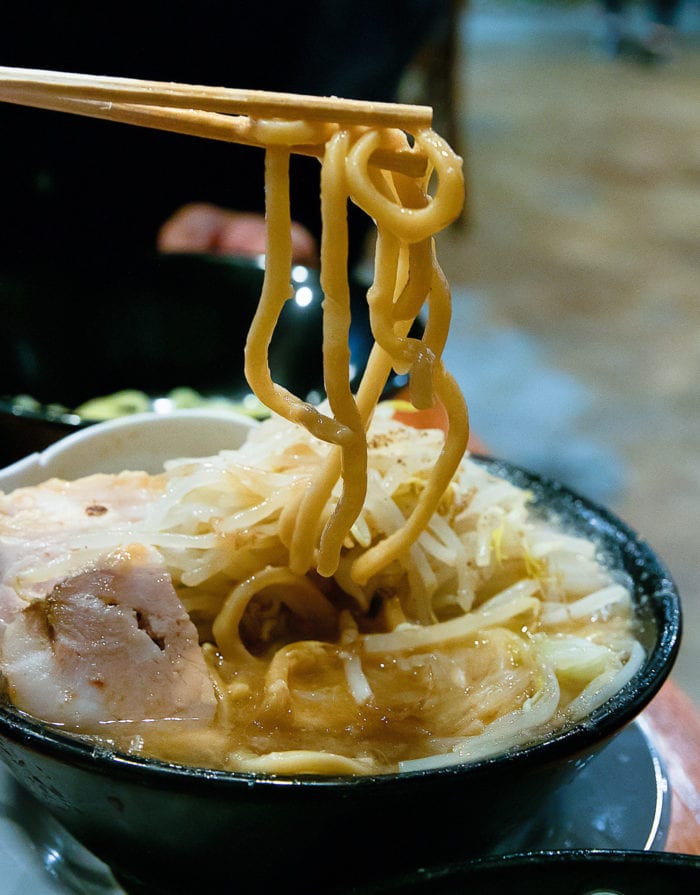 They use a different kind of noodle for the ramen. The noodles are thick and have been broken up so that the strands are not as long, making them easier to eat. However, the texture of the noodles were a bit too hard for me. I usually prefer my noodles extra firm, but these noodles had no pull or bounce to them at all. They also absorbed a lot of the rich broth which made the noodles a little salty.

Overall, we had a solid first visit. I would come back again for the tonkotsu and want to also try the red miso. I think the tsukemen here is better than most versions in San Diego, but I still prefer the one served at Tsujita LA. The staff was super friendly and we’ll be back to try more. 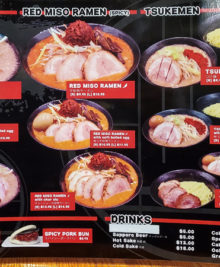