I have a hard time finding good Taiwanese food, but I finally found a new favorite during my last trip to LA.

We had just finished dinner with friends, when one of my friends suddenly remembered that he had wanted to try out Bebe Fusion. After showing me a few photos, I immediately wanted to go. So what did we do? We decided to all go over and have a second dinner. 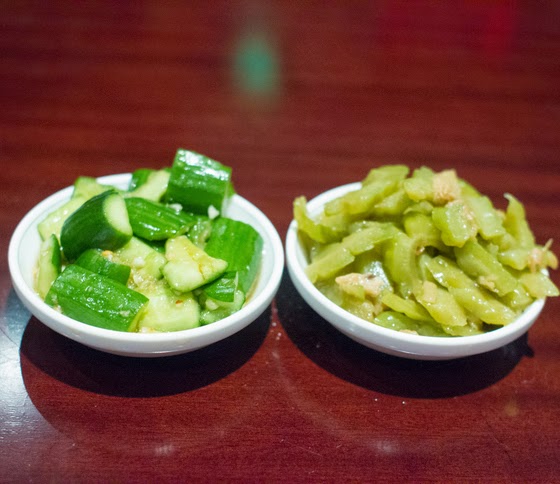 Our meal started with some complimentary cold appetizers, which immediately made me feel like I was in Taiwan, especially the bitter melon. 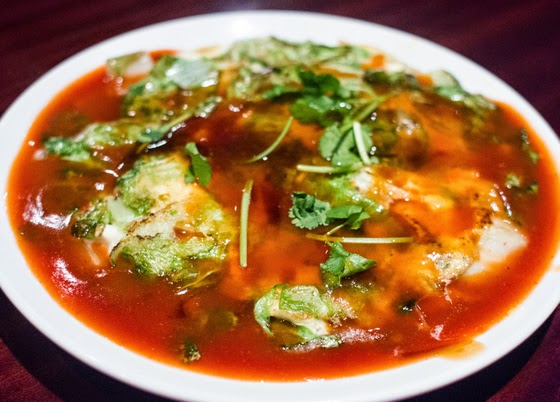 Our first dish was the oyster omelet, a classic Taiwanese street dish. This was definitely the best version I’ve come across in the US. The sauce had just the right balance of sweet and tart, the texture of the omelet was thick but not too starchy, and the fresh oysters elevated it to another level. It wasn’t cheap ($10 with fresh oysters, $7.95 with canned oysters), but it was quite good. 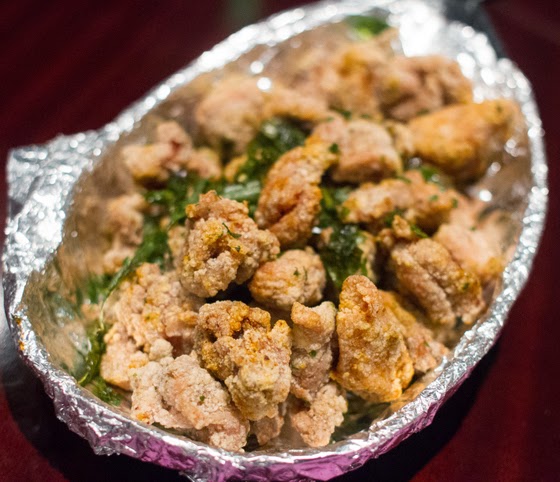 Lightly battered chicken pieces are seasoned with salt and white pepper and mixed with fried Thai basil for an aromatic touch. This was a pretty well done version. The chicken was crunchy, the basil still crisp. I wasn’t as amazed by this dish though, mainly because I’ve been making it pretty successfully at home. 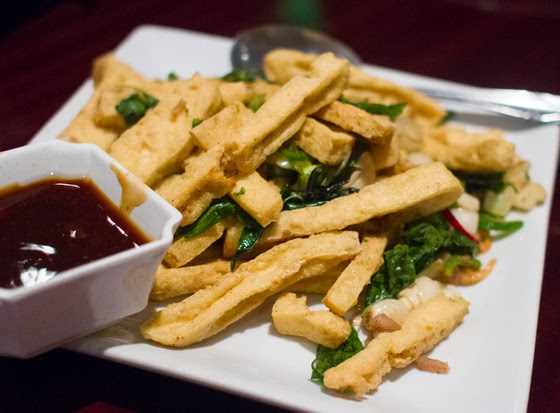 We were calling these Stinky Tofu Fries and it’s a picture of this dish that made us want to come here in the first place. This did not disappoint. I’ve had stinky tofu cooked many ways: fried, grilled, steamed, boiled in soup,  but never stir-fried. The tofu is sliced into sticks, pan fried until crisp, and then cooked with garlic and basil. This was one of my favorites of the night and one I’d definitely order again. 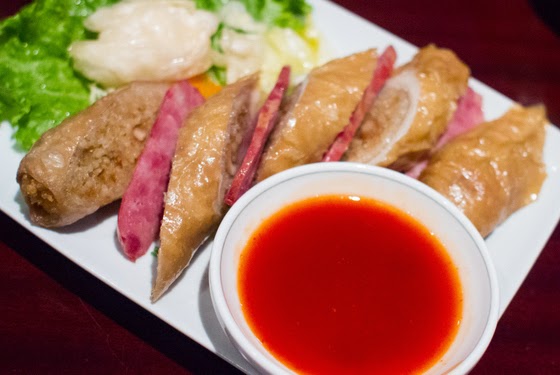 Literally translated as small sausage wrapped in big sausage, I discussed this Taiwanese classic in a previous post. In Taiwan, the way I’ve always had it is that the outside layer is actually glutinous rice that is encased in sausage skin to resemble a sausage. It is sliced open, and then stuffed with an actual grilled Taiwanese sausage. It’s reminiscent of a hot dog, with the outer “rice sausage” acting as the bread. However, lately, I’ve seen a variation. Instead of just an outside rice layer, the rice is actually stuffed inside a large intestine. The term “big sausage” in the name of the dish also means “large intestine,” which is probably how someone came up with this variation. 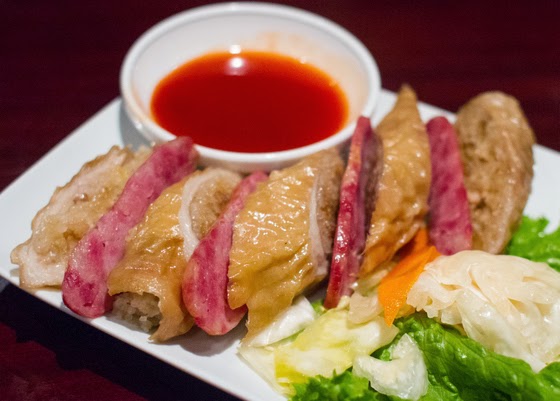 The large intestine here was also fried so it had a nice crisp skin which I really enjoyed. My one issue was that the slices were far too big, making it quite hard to eat. 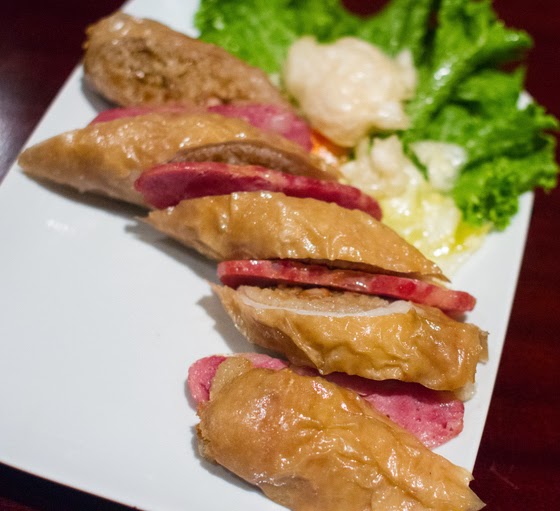 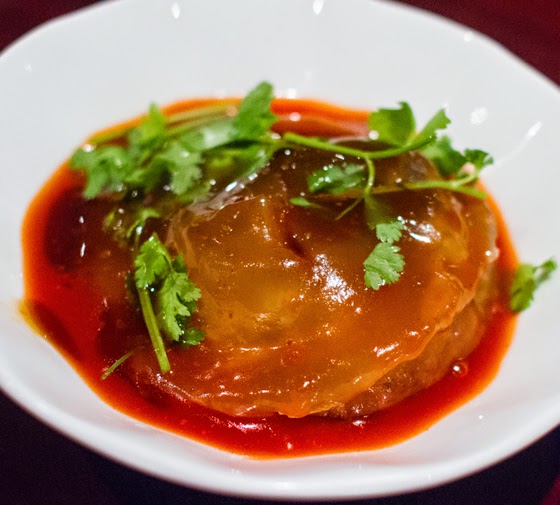 The Taiwanese meatball consists of ground meat and vegetables that is enclosed in a gelatinous shell, and then doused in a savory sweet sauce. This was a pretty decent version though not the best I’ve had. 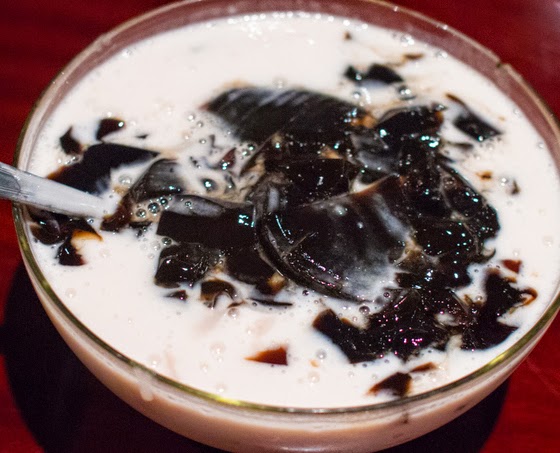 We ended the night with this sweet soup which turned out to be my other favorite dish of the night. I was expecting grass jelly and taro chunks, but instead the soup itself was made of taro, making this a delightful treat for anyone who enjoys taro. The soup was thick, but not grainy, and not too sweet. Just a perfect and refreshing way to end our meal. This is another must-order on my next visit. 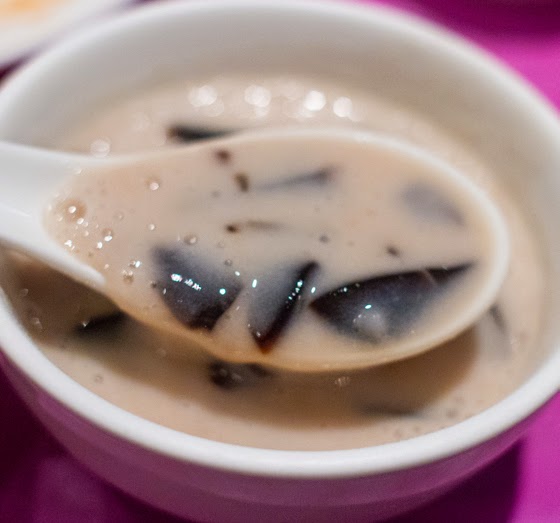 Overall, I really enjoyed this place and want to return for a full meal on an empty stomach. We saw some delicious smelling dishes go by to other tables while we were eating here and I can’t wait to come back.