Two weeks ago, Boyfriend and I celebrated my birthday, with our yearly tradition: going to my favorite restaurant in CA, Cafe Sierra at Universal Hilton.  Friday through Sunday only, Cafe Sierra breaks away from their traditional dinner menu and offers a wonderful seafood buffet.  If you love seafood and chinese food, this is the place to go!  The seafood is plentiful and the food is of higher quality than typical buffets.  The buffet is not called a chinese buffet, but there is definitely a lot of chinese influences in the dishes served.  Cafe Sierra doesn’t allow pictures and it was hard to sneak them in since there were so many employees mulling around.  So, sorry, not many pictures for this place.  I’ll give an overview of the food offerings though, and some pictures of the food I took on my plate.

The set-up is interesting.  A lot of the food is spread outside of the restaurant, letting guests entering the Universal Hilton drool at the offerings.  To the right of the restaurant, spread close to the lobby area is a display of cold seafood items.  Here you will find shrimp cocktail, large oysters, dungeness crab legs and king crab legs. 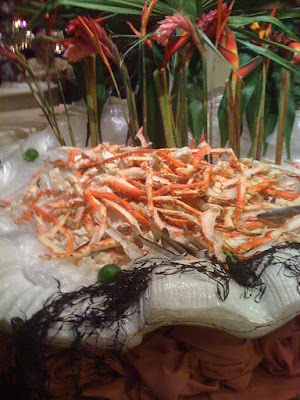 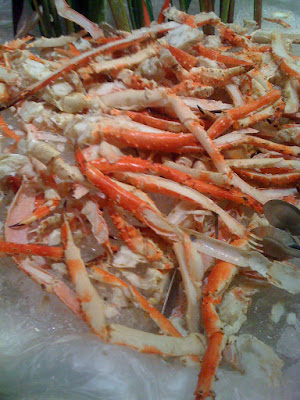 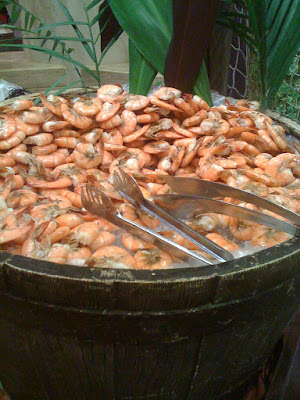 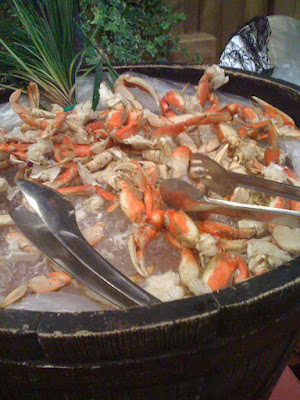 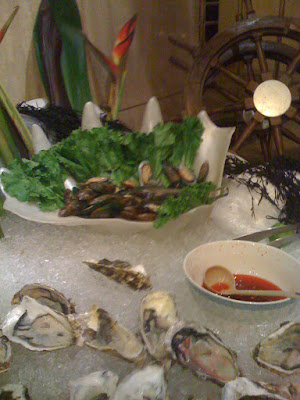 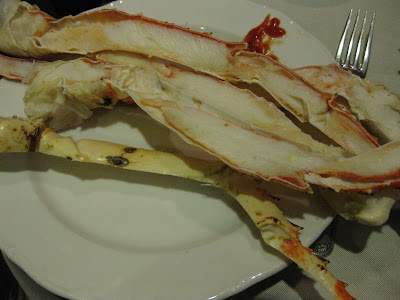 The highlights for me here are the carving station and the shark fin soup.  The prime rib is usually pretty good and not too well done, like other buffets. Unfortunately, there is no au jus sauce.  They only have a steak sauce, and horseradish and jelly. 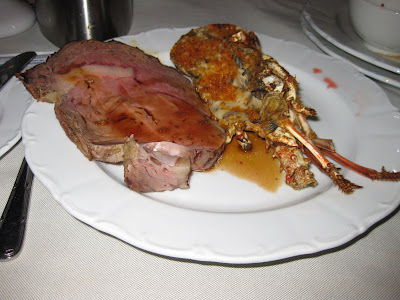 The lamb is very flavorful.  The ribs are dry so I don’t usually get them.  The lobster offered are the smaller, spiny lobsters. 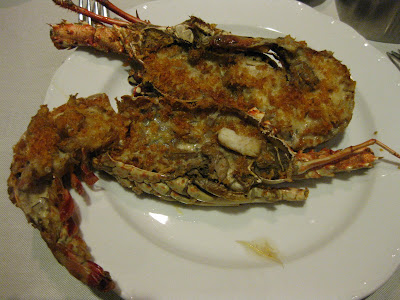 The inside is cooked with a mushroom cream sauce, a big improvement on the mayonnaise concoction I’ve tasted at chinese and japanese buffets. Unlike the chinese buffets I’ve been to, you don’t have to fight for the lobster here.  Yes, the server only gives you one at a time, but there is always plenty of lobster all night long.

The shark fin soup is the other big highlight.  Boyfriend and I love, love the shark fin soup!  It’s cooked with shredded crab meat, creating a very rich, seafood tasting soup.  The shark fin is not the expensive kind, but it tastes real and the soup tastes yummy.  Best of all, it’s served with red vinegar! Which is how the soup traditionally should be eaten with, rather than the white or black vinegar I see offered sometimes. 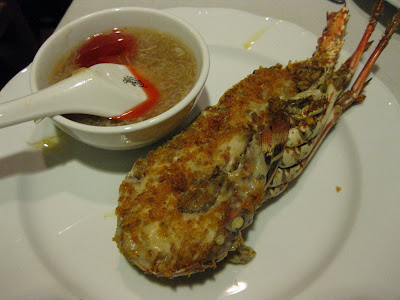 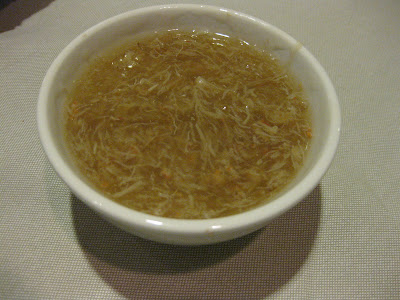 So, now we are finally making our way to the host podium, where you wait to be seated.  Right in front of the podium is a very large fruit display, which I call the “exotic fruit display” because they don’t use the typical fruits, but use more expensive ones.  There are usually white peaches, tiny d’anjou pears, tiny bananas, pluots, white nectarines, a bowl of dates, kumquats, and whatever else is in season (I’ve seen pomegranates in the winter).  The fruits are unwashed but available to take, so usually people just grab some fruit as they are exiting.

Finally, we get to the inside of the restaurant.  Here, you will find more hot entrees, salads, and desserts.

There is a row dividing the middle of the restaurant which has variou
s salads and hot entrees.  Normally I would skip the salads, but the salads here are full of seafood and other yummy goodies.  They are more like ceviche type salads.  One is clams pieces with cilantro and some tomatoes. 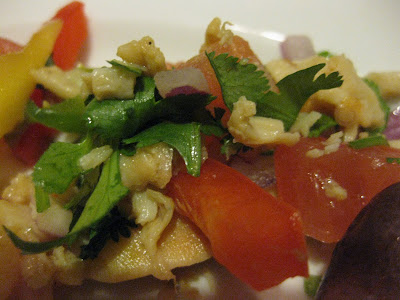 Another salad is with octopus. 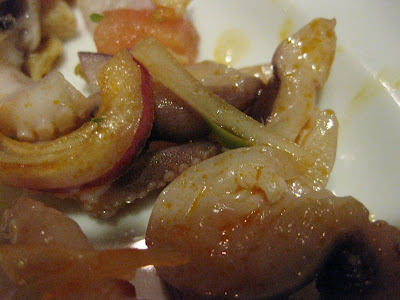 They also have a scallop salad; a mango, apple fruit salad; jellyfish and seaweed salad.

Some of the hot entrees consist of creamed corn, korean short ribs, mussels in curry sauce, mashed potatoes, and some other ones I can’t remember. 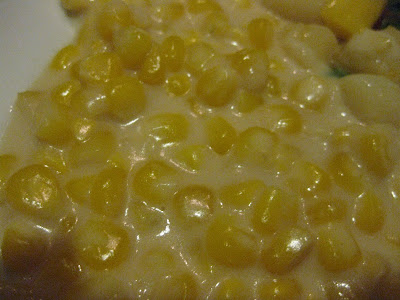 Then there is another station which seems to be an “everything station.”  Basically, it’s like they didn’t have room, so they put everything else here.  You will find smoked salmon and prosciutto here.  You will also find peking duck with shrimp chips, shrimp with candied walnuts, seafood curry, fresh cut fruits and some dessert items like creme brulee, chocolate mousse, bread pudding.  I like the shrimp with candied walnuts.  The walnuts are crispy, and the shrimp are big and don’t have too much mayonnaise. 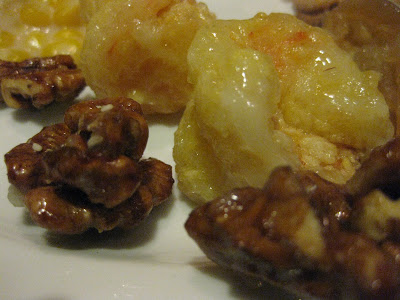 Finally, there is the dessert stations.  And there is so much to choose from! They have a variety of cakes, mango flan, cookies. 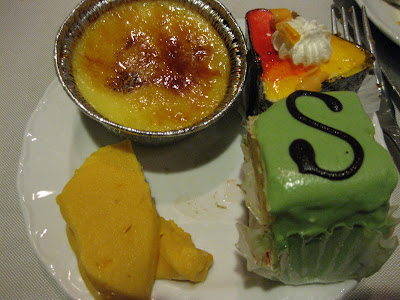 The mango flan is pretty yummy. I also like how pretty some of their cakes are.  Like the one below, it has a chocolate layer outside that looks like a wrapper, but is made of chocolate. 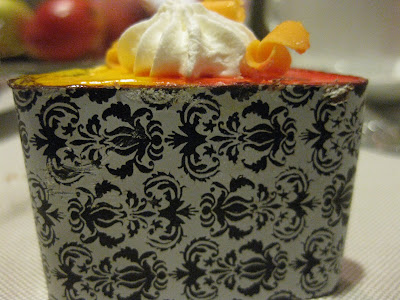 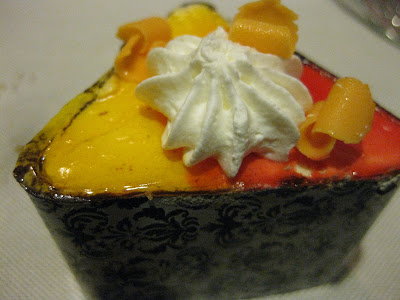 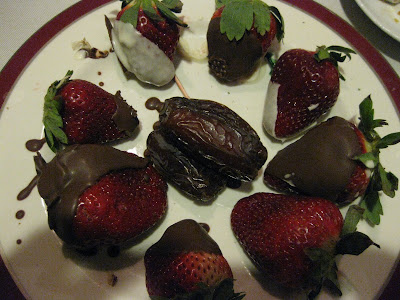 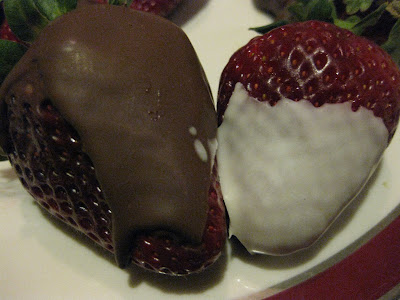 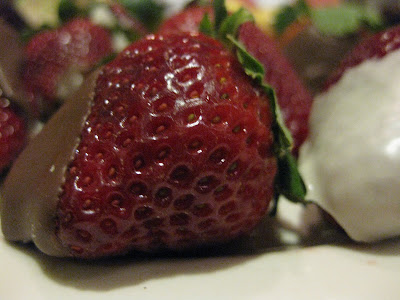 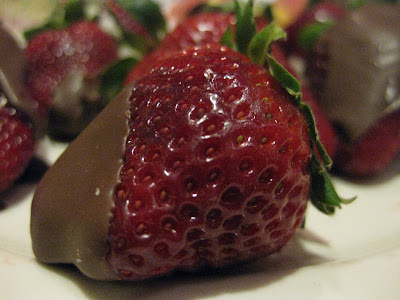 If you like ice cream for dessert, Cafe Sierra gives you many choices here as well! You can choose from soft serve with sugar cones ( I love sugar cones), or mini Haagen Daaz cups, or ice cream sandwiches or other ice cream bars.  They have a small freezer full of ice cream bars. Yum!  They also have some icy drinks available in the dessert section that I’ve never tried.

Finally, they serve cotton candy! Now this may not seem like a big deal, but apparently it is.  You know how I said you don’t have to fight for the lobster and other yummy foods at Cafe Sierra? Well you do have to fight for the cotton candy!  People are always looking out for the cotton candy, and as soon as some fresh ones are made and put out, they are immediately taken.  I don’t know what is it about the cotton candy.  Perhaps it’s the fact that you never see such an item offered at a restaurant.  Perhaps it brings out childhood memories.  All I know is that kids and adults alike grab this stuff and almost every customer leaves with cotton candy in hand.  The cotton candies come in blue and pink.  On this trip, Boyfriend was only able to grab pink.  Usually, Boyfriend and I will finish these on the drive home.  It’s amazing that no matter how full we are, there is room for the cotton candy.  It never lasts the whole ride home. 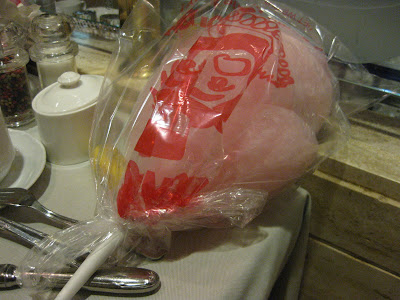