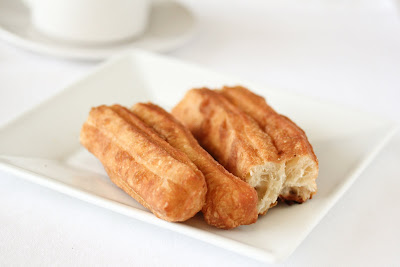 I thought I’d take some time to introduce a classic chinese breakfast item. Pronounced youtiao in chinese, these are also commonly referred to as chinese fried crullers. I’m not quite sure why this translation because other than the fact that they are both fried pieces of dough, the chinese youtiao does not really resemble the cruller doughnut.

If you’ve never heard of youtiao, it is a common breakfast item in Taiwan, as well as some parts of China.  Youtaio, literally translates into “oil strip.” The dough is shaped into a long stick and fried.  I’m not quite sure why it is made into such a long shape because usually once you buy it, the first thing you do is cut it in half to make it more manageable to eat. 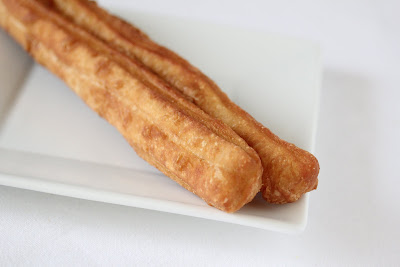 Normally, I prefer to have a lighter breakfast, and don’t like eating something so greasy first thing in the morning. But since I grew up eating these, this is my one oily breakfast exception. These fried cruellers can be eaten by themselves, and are usually dunked in a bowl or cup of hot, steaming, sweet soy milk. They are also often eaten inside a wrap. The wrap is a thick bread called sao bing, which works to soak up some of the oil. I confess, I’ve never been a huge fan of sao bing, as it can be too fulling and is often a little on the dry side. Another common option is to have chopped up fried crullers inside a hot bowl of a salty version of soy milk, which actually tastes more like a tofu soup. 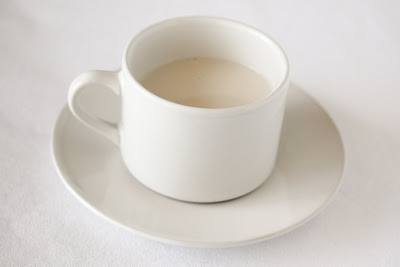 Youtiao are available for purchase at many chinese grocery stores in the US. Fresh made ones are available on weekends at Ranch 99 in the hot food section. Frozen ones which you can reheat in the toaster oven are available as well.

In Taiwan, you can find fried crullers sold by many vendors serving breakfast. Though it is just fried dough, there are definitely ones better made than others. Some people make them too hard, too dry, too oily, etc. I’ve never attempted to make my own. The ones in this picture came from Ranch 99. However, if you are interested in making your own, this recipe looks promising.

Also as a reminder, May 22, 2011 is the last day to enter my Starbucks giveaway!