So finding a place to eat for Sunday dinner ended up being harder than expected. I originally had planned to go to Ba Ren, after seeing mmm-yoso latest post on Ba Ren, which can be found here.  The post reminded me how long it has been since I’ve been.  But if you were in San Diego this past Sunday, you know that we were having record breaking heat.  The heat was a little too much for Boyfriend and he shook his head at the idea of going to eat spicy food at Ba Ren.

So then I had to find somewhere else.  I had heard about a new pasta bar called Pastalini, so I thought we’d go there.  But alas, they are closed on Sundays.  After some more debating and throwing out of ideas, we finally decided on Chon Ju Jip, which had been on my list of places to try after reading about how its bibimbap had made the list of 50 things to eat in San Diego before you die by the Union Tribune.

Well, we drove there, only to find out they were taking a break that day!  Now I really didn’t know where to go, except that on the way there I had passed by a grand opening sign of what appeared to be a new tea cafe.  I knew I wanted to check it out after, so I wanted to eat nearby.  Finally, we decided to go with Chopstix.  Despite living in San Diego for so long, I have actually never been to Chopstix until now.

Chopstix is a fastfood type Japanese place, that serves mainly ramen and curry. I have been wanting to try this place for a while now after hearing about the cheap prices and pretty decent amount of food.

I ordered the Chasyu ramen. 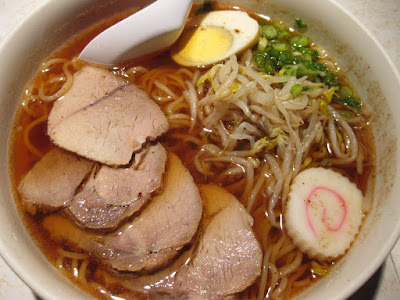 The dish was pretty simple.  I wish there had been more pieces of meat or other toppings.  The noodles were cooked right- not too soggy.  The soup base wasn’t too salty.  I often find Japanese ramen places to make their soup base too salty, so I was pleasantly surprised.  The pork was pretty flavorful, and was lean.  Sometimes slices of pork have too much fat on them, but these weren’t too fatty. 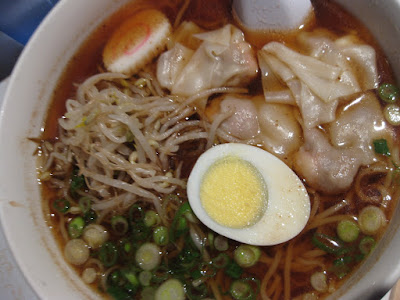 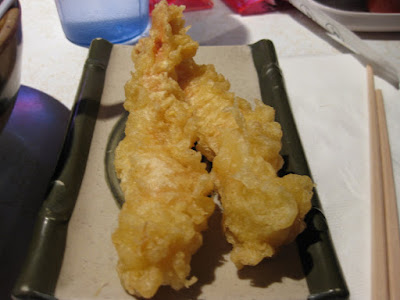 Baby brother says the udon noodles were a bit too soft.  The shrimp tempura came on the side, which is nice, so that it doesn’t get all soggy in the soup and instead you can put it in when you want.

Boyfriend ordered the beef curry and chicken katsu combo. This was a lot of food! I believe it was about $7.00. 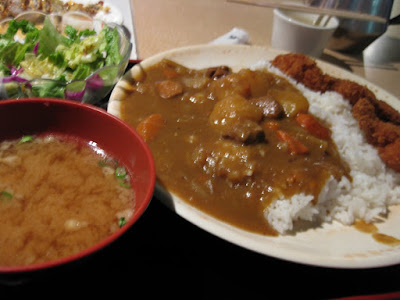 The main dish had a generous helping of beef curry and a few pieces of chicken katsu.  It also came with miso soup and a salad.  The curry was pretty good.  The katsu was a little bit dry.  I wish they had the Tonkatsu sauce to dip it with, but I didn’t see any on the table.

We also ordered the crunchy roll, which people raved about on yelp. 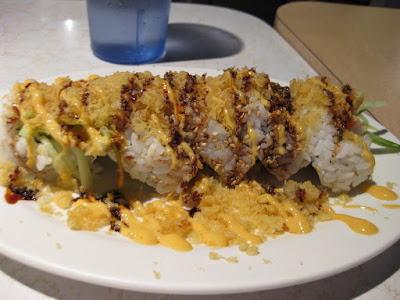 The roll is always on special for about $5 which is a good price for a crunchy roll. Unfortunately, it didn’t taste very food.  All I tasted was cucumber!  It was full of shredded cucumber and had only a little bit of tempura and a tiny bit of imitation crab: 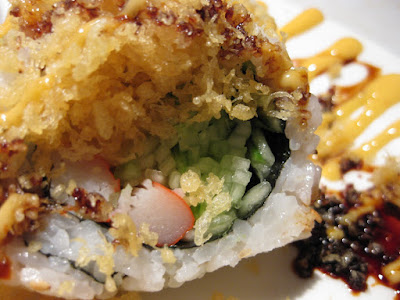 Little Sister and Baby Brother agreed that it wasn’t very good, but they both said that it is usually made much better. Oh well.

Service was fast and friendly.  It was a quick, cheap meal.