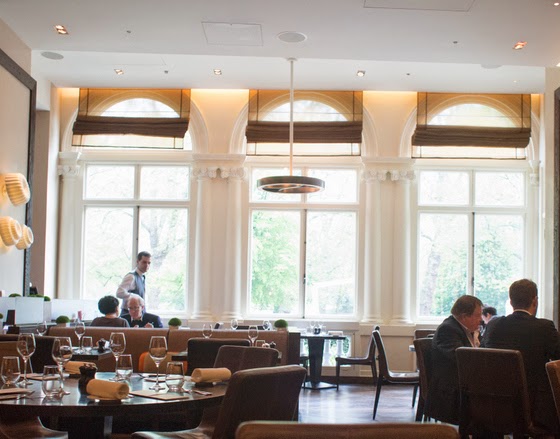 One of the best meals we’ve had this year was our visit to Dinner.

While not as well known as Heston Blumenthal’s other restaurant, Fat Duck (a 3 Michelin star restaurant), I was more interested in trying out Dinner (which has 2 Michelin stars). Everything from the simple name, to the concept, to the famed meat fruit had me enchanted with this place. Dinner was also recently ranked No. 5 on the World’s 50 Best. 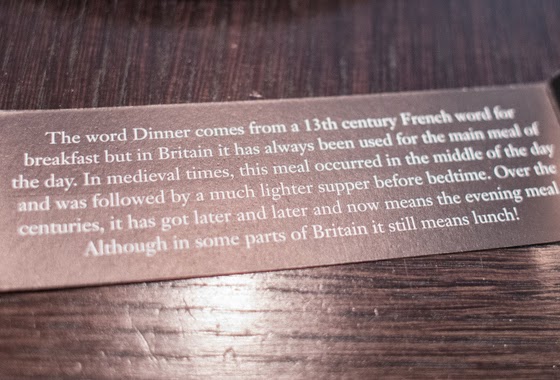 All the dishes on the menu are inspired by historical British dishes, which are referenced in greater detail on the backs of the menu pages. 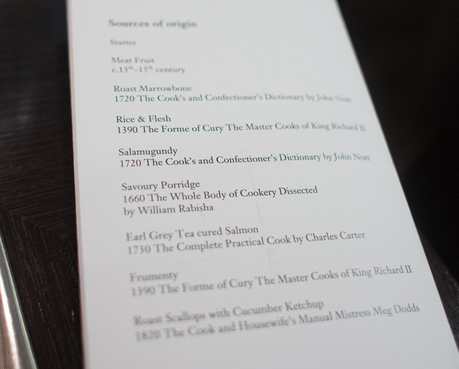 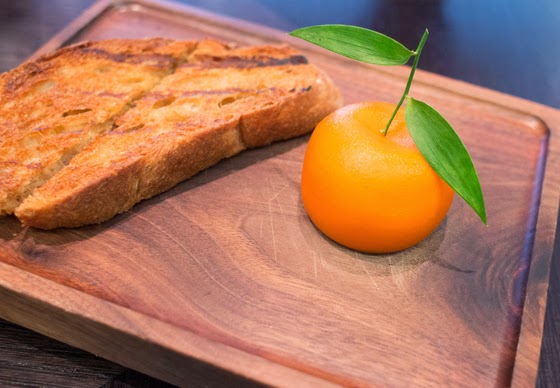 This signature dish was the one I was anticipating most and it did not disappoint. Chicken liver & foie gras mousse is delicately encased in a orange gelee. The resemblance to an actual mandarin orange is remarkable, down to the last dimple. Even with a close-up examination, I would never have guessed it wasn’t a real orange. I was a little surprised that the green leaf was inedible though. 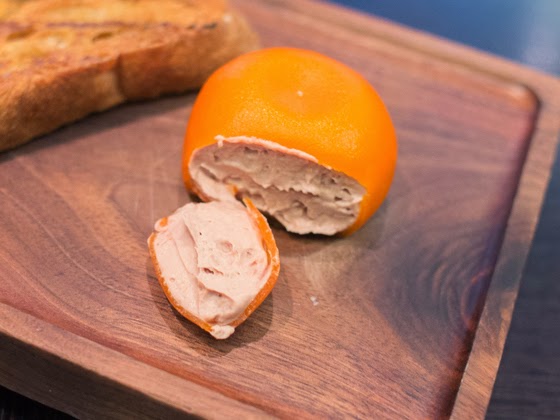 It was almost too pretty to eat but after much admiring, we finally sliced it open. Inside was the silkiest, creamiest foie gras mousse I’ve ever tasted. It has just a hint of citrus sweetness from the outer orange gelee. We thoroughly savored this, spread out on grilled toast.

My one gripe was that the dish only comes with two pieces of bread. Two more freshly grilled pieces are brought out once you start, but given how rich the mousse was, I would have liked to spread it on several more. 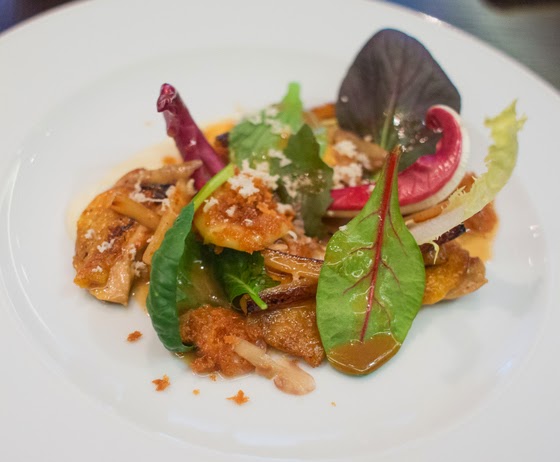 Lightly battered chicken oysters, bone marrow, horseradish cream and raw greens, this was another delightful appetizer. It’s meant to be a hodgepodge of ingredients, and while it was a little disjointed, each element was perfectly prepared. I especially enjoyed the savory chicken oysters with their crispy skin. 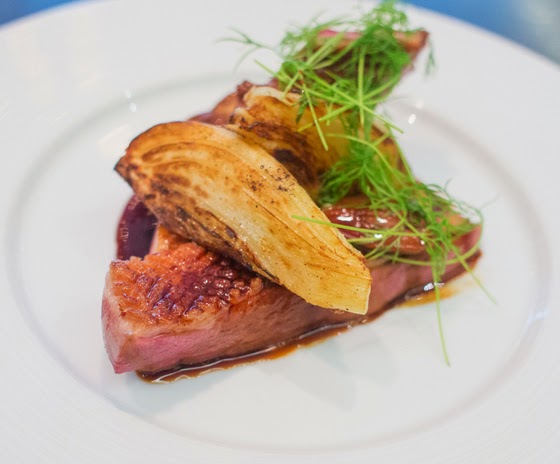 I had my reservations about this entree because I normally like my duck skin roasted and crisped, otherwise I won’t eat it. But despite the soft and chewy skin, I found myself eating every last bite. The duck is brined and then cooked via sous vide method. The succulent and tender duck was wonderfully flavorful and one of the best preparations of duck I’ve had to date. 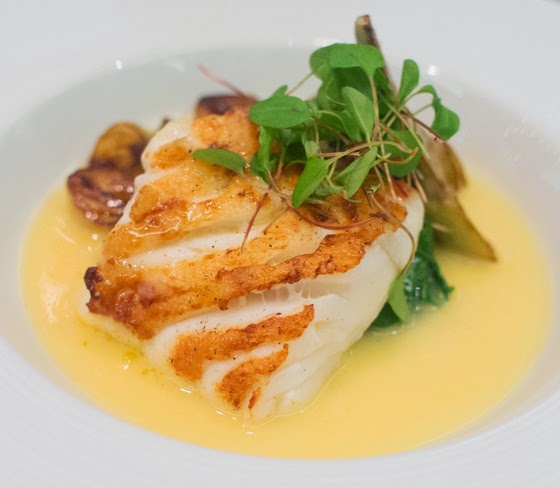 This was Mr. K’s choice. The cod was flaky and light. The flavors were more delicate and a little underwhelming for me after the powerful flavors of my dish, but it was the perfect choice for Mr. K. 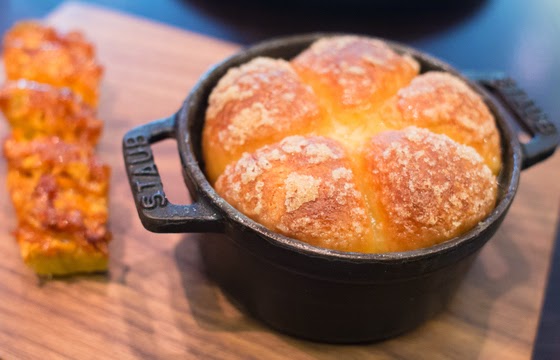 We couldn’t leave without trying their famous tipsy cake, which must be ordered at the beginning of your meal because it takes at least 30 minutes to make. 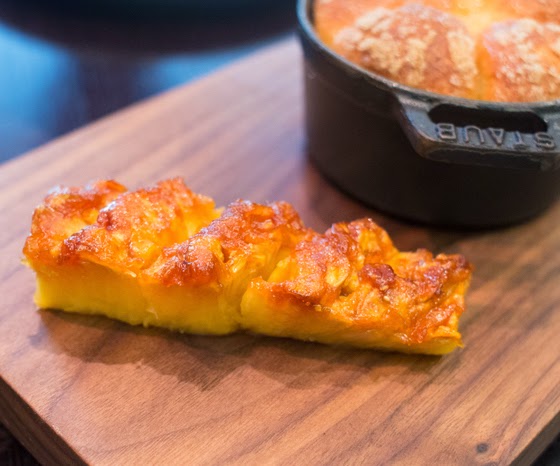 I’m probably in the minority here, but after so much hype over this dessert, I didn’t quite love it. It was good, but not memorable, and I’d rather have spent the money on another appetizer. The warm cake consists of pull apart pieces of brioche, soaked in syrup and alcohol and baked in a cast iron skillet. My favorite part was actually the roasted pineapple, cooked on an open fire until the sugar caramelizes. We finished our meal with this complimentary dessert. The earl grey infused ganache was a tad too bitter for me.

Overall, we thoroughly enjoyed our meal here. The meal exceeded my expectations so I wasn’t at all surprised to find it had moved up to No. 5 on the World’s 50 Best Restaurants shortly after our visit. It was a highlight of our London trip and one of the best meals we’ve had this year. We definitely want to return again.

10 comments on “Dinner by Heston Blumenthal”