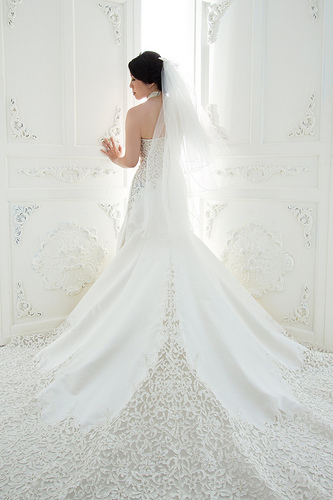 So I’m going a bit backwards in time now, trying to recap my wedding experience.

Last Fall when DH and I went to Taiwan, we also took engagement photos there. Taiwan has become quite well known for their engagement photo shoots and engaged couples come from all over to take the pictures there.

The style is what they label as “magazine style” or what I like to refer to as “glamour shots.” Studio setting, heavily touched, and everyone ends up looking the most beautiful they’ve ever looked. I thought it would be fun to have one set of these pictures for something to look back on when we grow old and wrinkled.

It was a time consuming process but we had a lot of fun and we were really thrilled with how the photos came out. The packages seemed expensive at first, but once we realized all that was included, it was a reasonable price.

For the photo package we chose, we got four different settings: two outdoor shoots and two indoor ones. The day before, we came in to choose four different outfits, all provided by the studio. Jewelry, hair, makeup are all included as well. After the outfits are chosen, measurements are made and some speedy seamstresses work furiously to alter the clothes overnight. We also met with the photographer to discuss what kind of style we wanted, etc.

A lot of the outfits chosen for the shoots were not my typical style and not dresses I would have chosen for myself, but the girl helping me showed me why they would look best for the photo shoots (certain fabrics flowing better in an outdoor environment, fabrics reflecting well in dark lighting, etc). Interestingly, they also provide two wedding dress shoots, which confused my friends later thinking I already had gotten married.

The next morning, we started out bright and early, arriving at 8am to get our hair and makeup done. My makeup artist was a miracle worker. I had never felt so beautiful. And she made it look very natural too. Even my ever so critical brother who never has a kind word told me I looked so different when he saw me later that afternoon. I liked her so much I wanted to somehow bring her to the US to do my wedding makeup. Or have my wedding in Taiwan.

For each of the four shoots, I was given new set of jewelry, new hairstyle, and makeup touch-ups.

Since they are used to having foreigners come for these shoots, they sent along two assistants who spoke English to help out DH. I had never had assistants to pamper me before. Every time I took a step, one would be there to lift the train on my dress, constantly fix my hair. 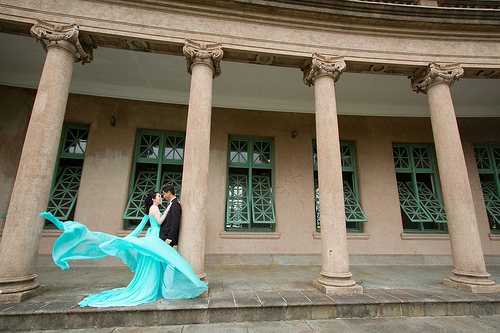 We started with the outdoor shoots. I had seen this building with the columns and thought it had an old-world romantic feel. The venue was actually a waterpark, though the building we were in was pretty far from the rest of the waterpark. I’ve never been very photogenic and avoid cameras like the plague. So the first shoot was really hard for me to loosen up and adjust to. I was too stiff, too nervous and the photographer got visibly frustrated with me. About an hour into the shoot, I was close to tears, and wanting it all to be over. But after the first session, things got better. 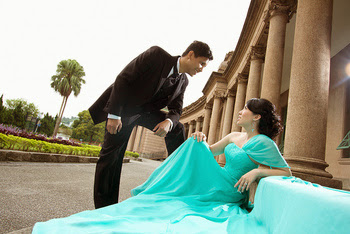 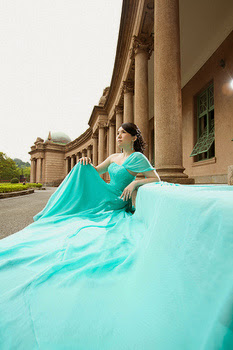 I got used to the photographer, he got used to me. We got along much better for the rest of the day and I ended up really enjoying myself. 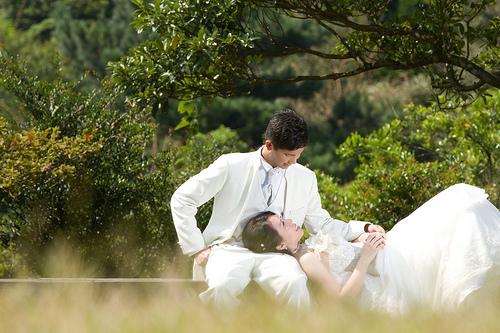 For the second shoot, I really wanted something with a lot of nature. We went to the mountainside which was beautiful and perfect for the photo shoot I had imagined. This was the most interesting shoot for DH and I because of all the behind the scenes stuff that couldn’t be seen in the photos. For instance, there was quite a lot of mud near the water, but I was told to drop my pretty dress right onto the mud. Poor white dress. The dress also had several layers of a mesh material. The mesh material ended up being really really good at catching bugs as we walked through the grass.

I’m not even exaggerating. I had maybe 20 different bugs stuck inside the layers of my dress. Every time we’d sit down, I’d find ants, grasshoppers, spiders, etc.

The reason why we ended up choosing to keep this specific photo above was because I worked so hard for it and nearly fell into a dirty pond of water. At one point, we photoed near a small bridge. The photographer than told me to hop on and walk on the narrow hand railing that was narrower than a balance beam. That was not fun. Then he told me to lay down and balance on it, which nearly caused me to fall into the water. Of course, you can’t tell any of that from this photo. 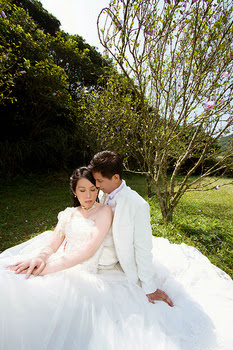 We chose to do one dramatic shoot, which reminded me a lot of those ads you’ll see in magazines. I loved the shadows captured on the red dress. The photographer joked that this was such an easy shoot for me because we didn’t have to smile. 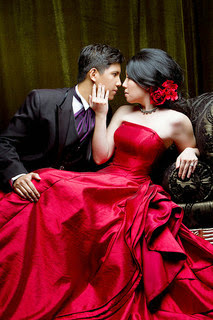 Out of the four dresses, this bridal one was my favorite. I actually really fell in love with it and wanted it as my wedding dress. They explained to me that if I was getting married in Taiwan, that actually would have been an option because in Taiwan brides usually rent dresses from their photography studio for the ceremony. I was pretty sad I wasn’t able to find anything similar to this for my actual wedding day though I guess at least I have this photo to remember it by.

So that was my engagement photo shoot experience. DH and I had a good time and were really happy with all the photos. We wanted to keep all of them, but since it’s a magazine shoot, you don’t get to keep all the originals and have to select only a few images based on the package you choose (usually around 20-30 photos). It was really hard to narrow it down because the photographer took a lot of really great photos. I still get giddy seeing them. We’ve discussed wanting to do it again as a wedding anniversary shoot in the future. 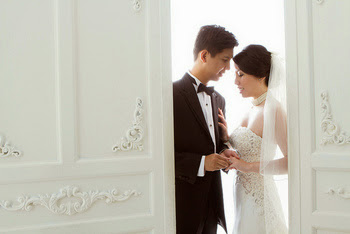 For those interested, the studio I used was Cangai. Their prices were some of the better deals we came across and I was very satisfied with the services and would use them again. You can view the English website here or Chinese website here. They also have some locations in other parts of Asia like Hong Kong and Singapore.