This weekend I attended the Second Annual Foodbuzz Festival in San Francisco.  The festival was a three day event opened to food bloggers for a weekend of eating, drinking, networking, and educational sessions. The festival is free for Foodbuzz members.

I had opted not to attend last year, and after reading posts from others, I immediately regretted my decision to not attend.  So this year, I cleared my calendar and booked my tickets early.

The festival started Friday night, with a welcome reception and a Street Fare Food event held at Fort Mason.  When we checked in, we were given a huge tote bag full of free swag, including lots of kitchen gadgets and some food samples and coupons. 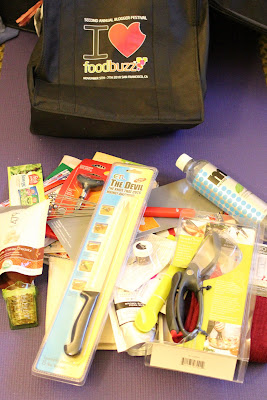 We arrived at Fort Mason early, and so I got a chance to explore it a little bit before the Foodbuzz event was ready. Apparently, every Friday, there are a group of food trucks that park inside Fort Mason. They looked so delicious, but I saved my appetite for the free food that was to come. I wish we had a similar set up in San Diego.  Even a gathering of LA food trucks usually requires an admission fee.  Here, the event is free and it happens every Friday. 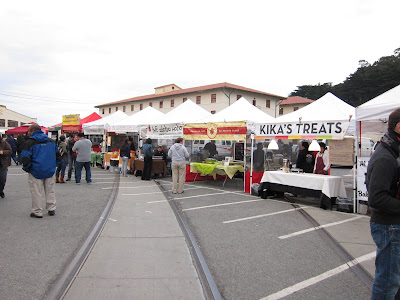 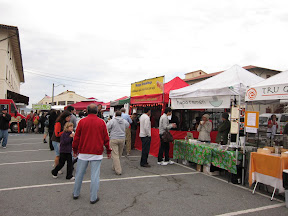 The evening’s event took place inside a large building which used to be a former theater. As soon as we entered, we were greeted with cups of wine. Wine was very prevalent for the next three days.  It was actually quite hard to find water. 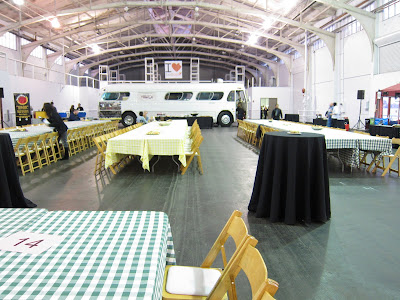 On each table, there was a large platter of various cheese and breads. Everyone seemed to be pretty busy taking pictures of the platter, but most of the platters were left untouched, which is a shame because I enjoyed the food on the platter. 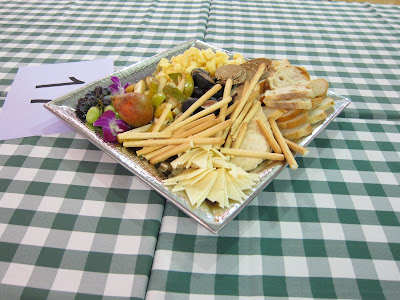 I had opted to not bring my large dslr camera to the first event, thinking it would get in the way and would be annoying to take pictures, especially since we would be eating street food. But once I arrived, almost everyone there had their dslr cameras and were snapping away. Dslr cameras were strung around blogger’s necks as commonly as necklaces. I made sure to use my dslr for the rest of the events so I could have better photos.

One of the features of the street food fare were cupcakes made by Mission cupcakes. Camera crews were filming from the Food Network, as they will soon be featured on an episode of Cupcake Wars. Hundreds of mini cupcakes were set up to spell “Foodbuzz.” 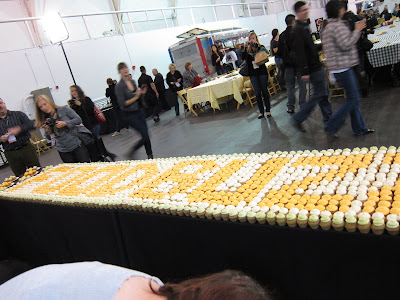 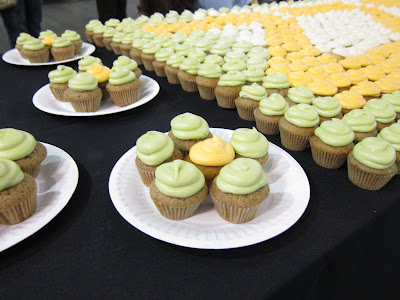 I had some cupcakes at the end of the event. I really enjoyed them, though I enjoyed certain flavors better than others. Usually I hate frosting, but the frosting on these minis were quite light and I didn’t mind eating the frosting.

Various vendors were set up inside the building serving up street food. I was lazy about taking pictures. It’s definitely a challenge to be standing around and eating and snapping pictures of your food. So I only took a few pictures, even though I sampled everything.

This is a taco from Namu, and it ended up being one of my favorite items of the night. Korean style marinated beef was served on pieces of seaweed. 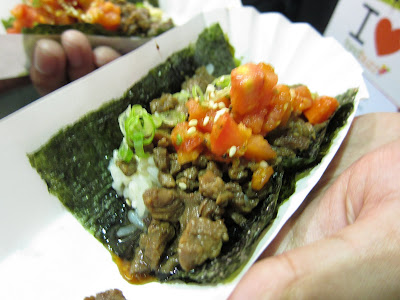 Fried pork sandwiches from the 4505. The line for this was really long. I really enjoyed the pork, but this sandwich was definitely heavy. The pork is deep fried and it is served with a side chicharrones. 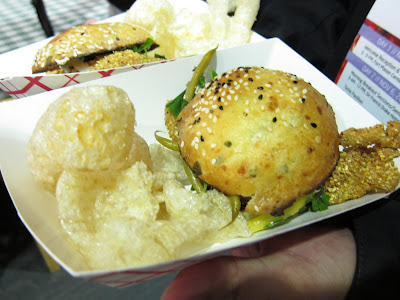 The Roli Roti sandwiches were also a popular station that night. People seemed fascinated by the pork being sliced to make sandwiches. The pork had layers of fat wrapped in. I actually was not very fond of this. I don’t like eating slices of meat with chunks of fat on it. 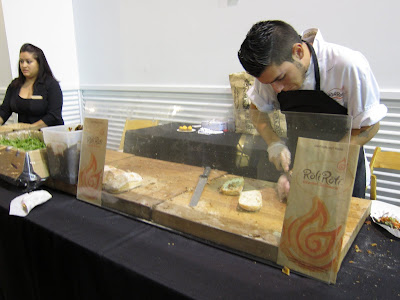 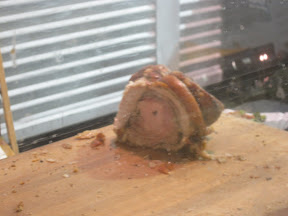 Spencer on the Go was on of the trucks that participated in the Food Truck Race. They had some unique menu items including a lobster cappucino, escargot lollipops and lamb cheek sandwiches. I chose to try all three. 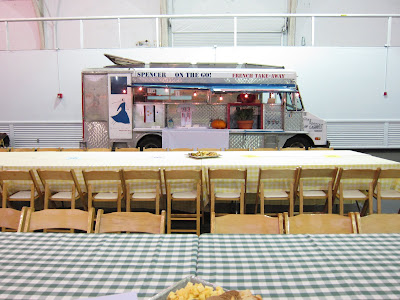 The lobster cappuccino had a good flavor to it but it was so watery.  Catty Critic thought that lobster chunks would have made the soup so much better, and I agree. 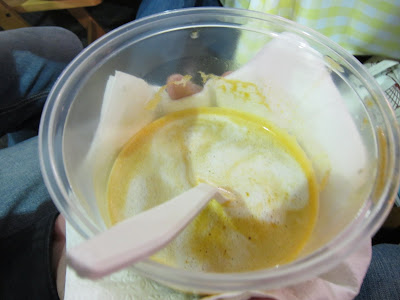 The escargot lollipop was very oily and I could barely taste the escargot. The lamb sandwich was alright, but I was pretty full by this point so I couldn’t finish it. 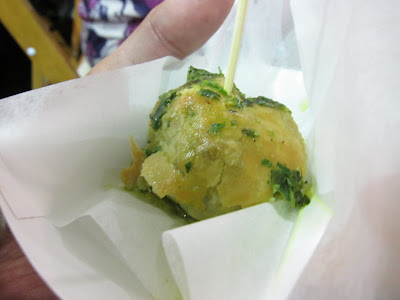 There were quite a few other stations I sampled, but didn’t snap pictures of including pizza, chick curry wraps, paella, ice cream. 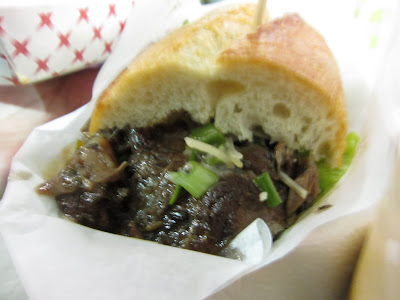 Despite being pretty full, I did manage to grab a few more mini cupcakes before exiting for the night.

I didn’t completely love the various food offerings, and it was especially hard to get excited when the outside food truck offerings seemed much more tempting. It was fun to mix and mingle with people though.  In general, I met a lot of people during the weekend, and it was nice to finally put a face to blogs I’ve been reading.  I got to meet/hang out with The Catty Critic, Fooding 411, The Cilantropist, Foodie/Nutritionist, and Nibbles of Tidbits, just to name a few.