This past weekend the BF and I had the pleasure of dining with one of my favorite LA food bloggers, Rosa from Dining with the Catty Critic, along with her husband and two of their foodie friends.

We had brunch at Fraiche LA in Culver City (not to be confused with the Santa Monica location). A few months ago, Fraiche hired Chef Ben Bailey to helm their kitchen and rework the menu. Chef Bailey is well loved by the food bloggers in LA and I’ve been wanting to try his culinary skills since he worked at Petrossian though I never got a chance to. After reading numerous drool worthy posts which can be found here, here, here, and here, I decided I couldn’t stand to read another post and had to make a visit.

The BF and I arrived in record setting time, as there was no traffic at all during our drive up. I believe this is the first time this has occurred. Apparently no one is on the road the morning of Superbowl Sunday (but surprisingly a lot of them are on the road when the Superbowl starts…). Also, no one is out eating either, as the restaurant was uncharacteristically empty.

Unfortunately for me, Chef Bailey was not working that day, so I didn’t get to meet him. I guess I will have to revisit at another time.

Catty Critic, having already dined at Fraiche on several occasions, was an expert on the menu and gave us a run-down of what to order. 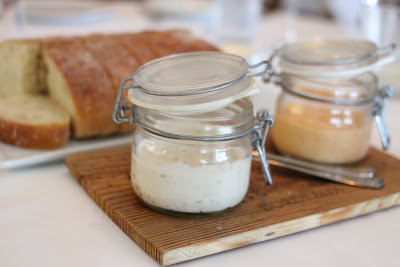 However, my favorite spread was definitely the smoked trout. It was creamy and smokey with just the right amount of herbs and lemon mixed into the flavors. I couldn’t stop eating this stuff.

One thing I noticed though was that our bread was not toasted. In the posts I had read, the bread had been toasted.

Catty Critic also ordered a fruit salad which was supposed to be accompanied with a ginger syrup. I forgot to take a picture of the fruit salad, but it arrived plain without any accompaniments. When she inquired as to the syrup, they had to actually get out the menu and check before confirming that it was supposed to have a syrup. They quickly remedied the situation and provided the syrup, but it appears the syrup was not very gingery.

For my main entree I ordered the truffle burger, something I’d been eyeing for quite a while. There is an option to add a fried egg on the burger, and at Catty Critic’s suggestion, I chose to do so. 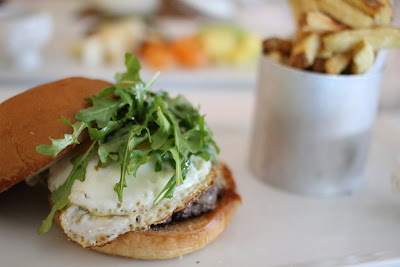 I ordered the burger a medium and it was more of a well done. However the burger was very moist, juicy and the truffle oil really raised the taste to a new level. The bread bun was toasted and was hefty enough to hold up the burger. The runny egg yolk added a deliciously messy factor to the burger. The burger was served with a side of fries, which was the only thing I didn’t like on my plate. 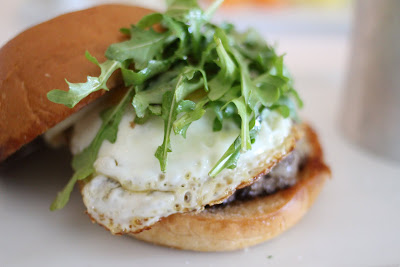 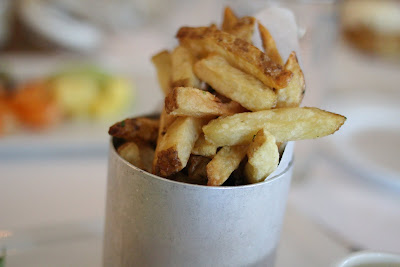 BF chose the daily handmade pasta which on that day was bucatini carbonara. The pasta was tossed in a creamy sauce with little bits of crispy pancetta. BF and Catty Critic’s husband both chose this dish and loved it. Again, the previous versions I had seen of this pasta, it was topped with a slow poached egg, which I can only imagine would have made this dish even more delicious. On this occasion there was no egg. 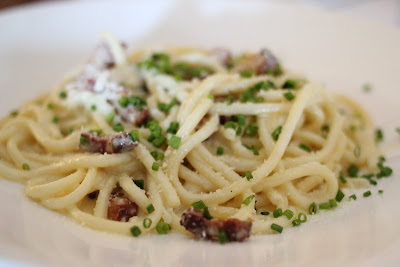 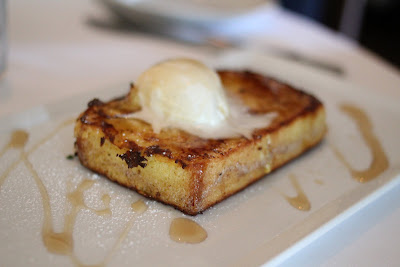 I was pretty full when we were done but after Catty Critic’s description of the mango and passionfruit panna cotta dessert, I couldn’t help but want to try it. We decided to share one. The panna cotta is topped with a layer of passionfruit gelee and chopped mangos, and then garnished with some pop rocks.

The panna cotta was just the right amount of sweetness for me and I liked the tiny bits of mango pieces that lay on the top layer. The little pop rocks added a fun and playful factor to the dessert. 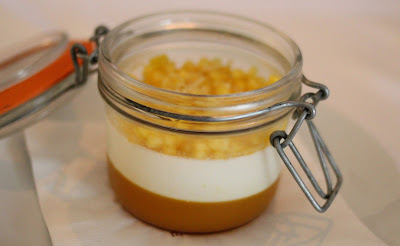 Overall, we had a nice relaxing brunch. I loved hanging out with Catty Critic and meeting her husband and friends. I liked what I ate, but I couldn’t help but notice some inconsistencies in the kitchen without the executive chef around. Gastronomer recently noted a similar inconsistency in experience from when she dined with Chef Bailey and then without.

Hopefully I’ll have another chance to return when Chef Bailey is around.