Fu Hang Dou Jiang (阜杭豆漿) is an extremely popular breakfast spot in Taipei, with locals and tourists lining up every day to get in.

Taiwanese breakfast classics are served at nearly every small vendor in Taipei, so I was curious what made this particular place so special. 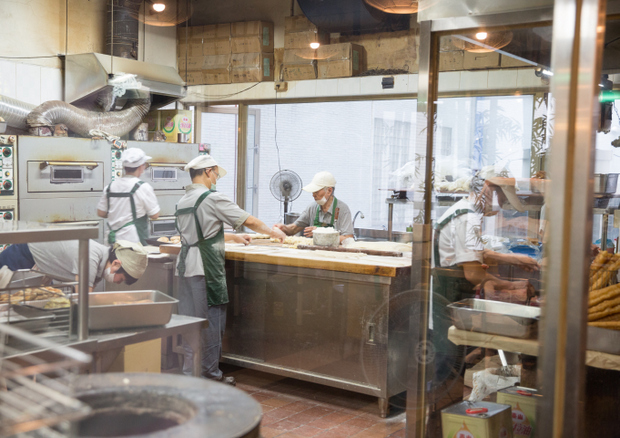 Traditional Taiwanese breakfast dishes tend to be on the heavy side, which normally I don’t really desire first thing in the morning, but I was introduced to these dishes as a kid, so it definitely brings back happy memories. 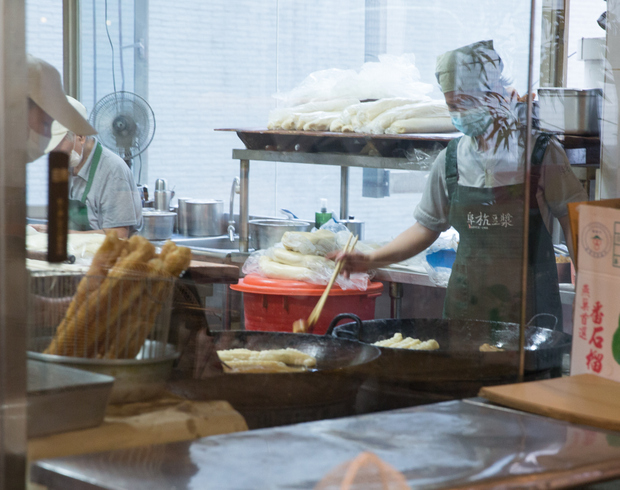 The shop is actually located in the upstairs food court of a marketplace, making it a little difficult to find. I provided detailed instructions with photos at the end of the post.

We were told to go early to avoid super long lines. We were there before 7AM thanks to this wonderful concept known as jet lag. And yet, we still had to wait nearly thirty minutes to get to the front to order. 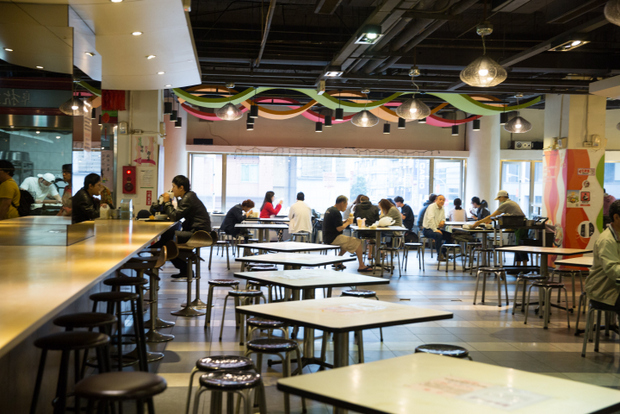 Because it was so early in the morning, the rest of the stores in the food marketplace weren’t yet open, which meant a lot of open seating.

Once inside, you can watch everything being made, which is pretty fun. With the smaller vendors you rarely get to see the prepping process.

Despite this being a very touristy spot, the menus are only in Chinese, which is actually unusual. I think most of the non-Chinese speakers simply pointed to what they wanted. 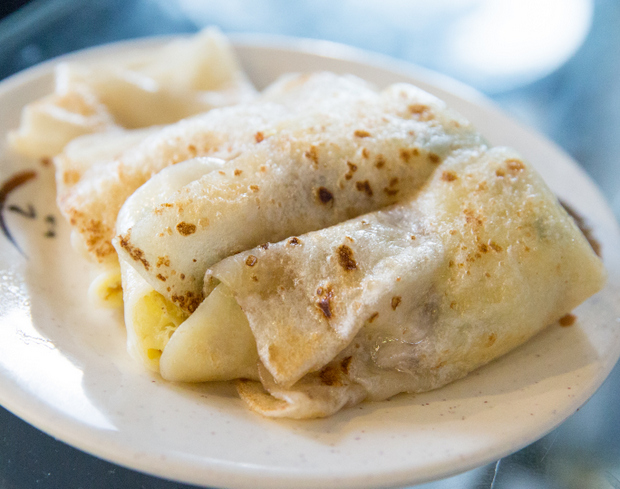 I’ve seen this translated as egg crepe and egg wrap. It starts with a soft tortilla/crepe/pancake, where an egg is cracked on top of it and the two are cooked together. Once done, it’s wrapped up like a burrito and then sliced into smaller pieces. Sometimes you’ll find other ingredients or sauces stuffed inside as well, but this version we ordered was pretty basic.

I wasn’t too impressed. The tortilla/wrap/pancake/crepe–whatever you want to call it– was too doughy for my liking. 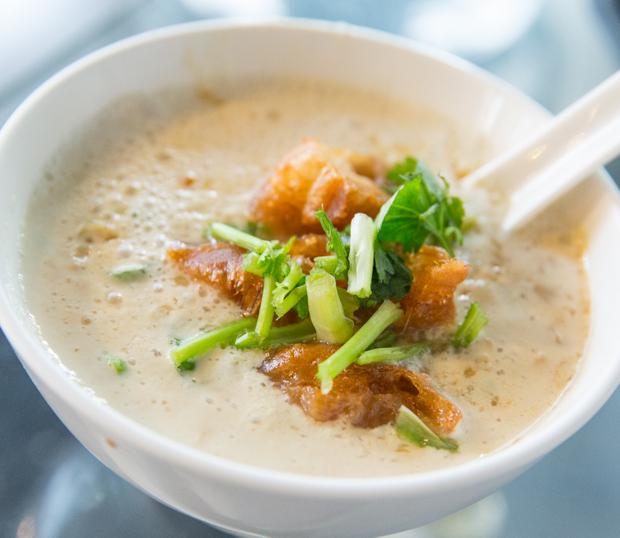 This was the dish I was most impressed with. Soy milk is a popular Taiwanese breakfast beverage. Soy milk is served two ways: sweetened (hot or cold) which tastes very similar to the flavored soy milks now readily available in the US, and “salty” soy milk which is actually more of a savory soup with curdled soy milk and a mix of other ingredients like dried shrimp, pickled vegetables, chili sauce and chopped up fried crullers. 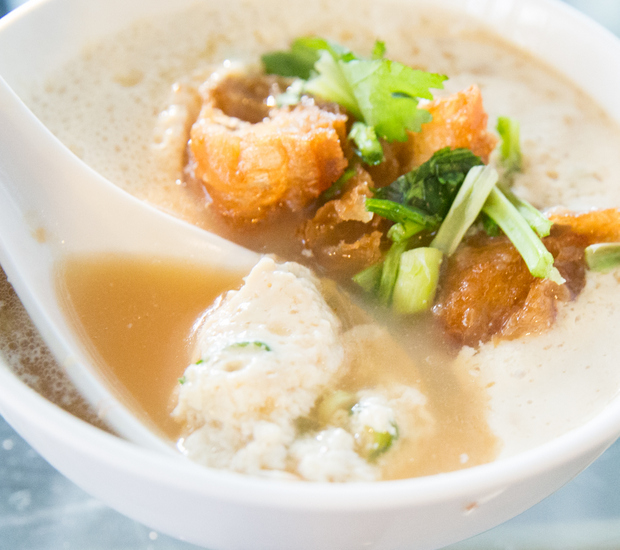 Normally, the appearance of curdled soy milk isn’t very appetizing, though it tastes like silken tofu. What I really liked about the version here was that it was served as one solid piece, with the soup and other ingredients underneath. It reminded me of the Asian steamed egg custard found in Chinese, Japanese and Korean cuisine. It was very smooth and soft and full of flavor. 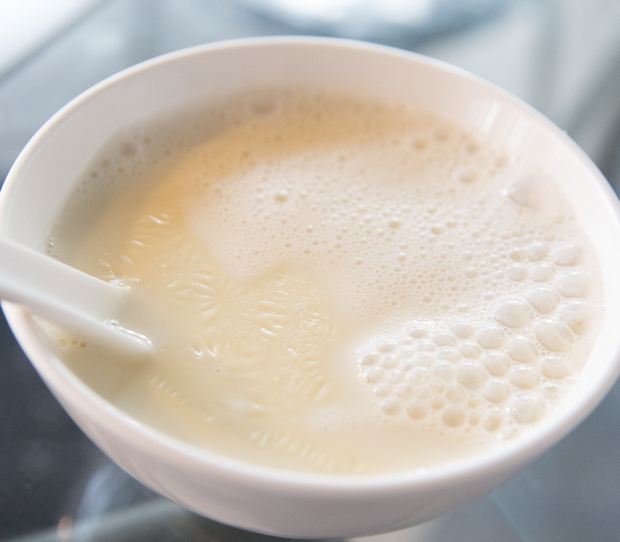 We also ordered a bowl of hot sweetened soy milk. Soy milk is made fresh at most places in Taiwan and it’s a real treat if you like soy milk. It goes very well with fried crullers and other Taiwanese breakfast dishes. 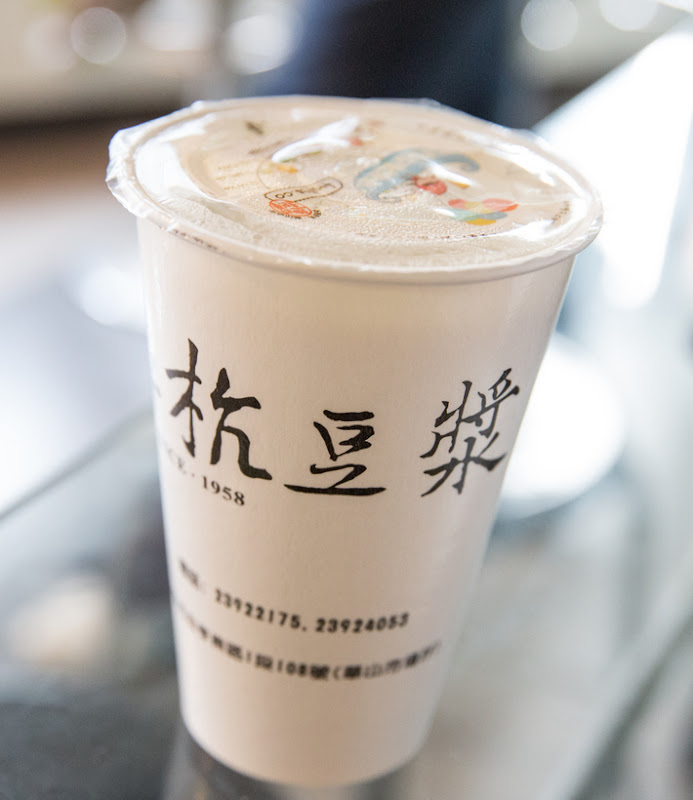 We also took a cold one home for my brother who was too lazy to get up. 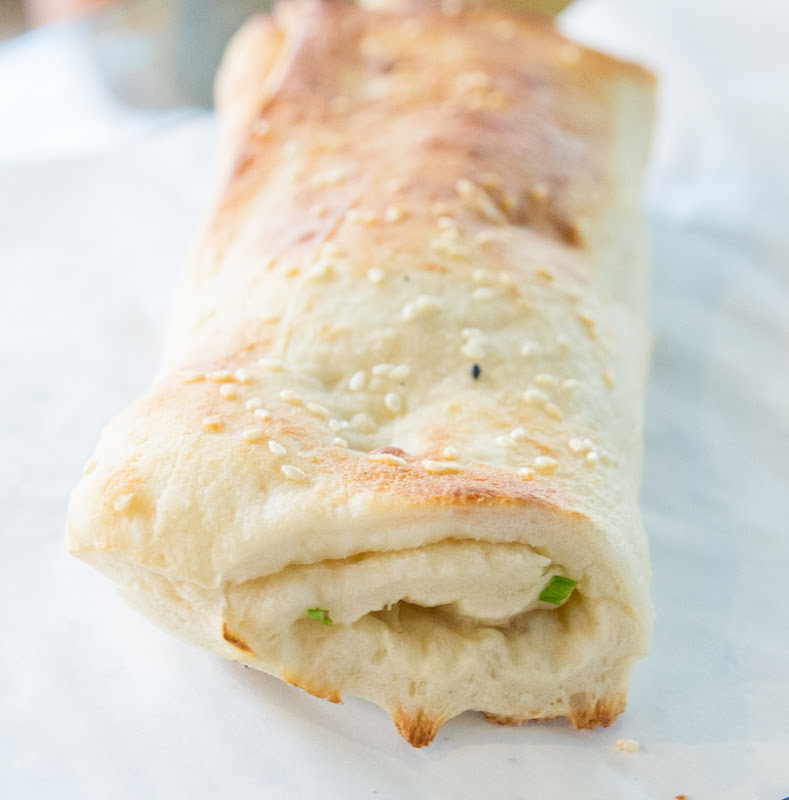 Shao bing is similar to a flatbread. It’s usually used as a wrapper for fried crullers, though it can be ordered on its own. According to my research, the thick shao bing is their signature item. Usually shao bing is thin, flaky and most places, for whatever reason, make it really dry. As a result I rarely ever order it.

But customers raved about the thicker version offered here which is fluffier and not dry. They also offer the standard thinner one too. While I agree that this version was moist, fluffy and chewy, what I couldn’t get over was the sweetness. It’s meant to be savory but there version had a little bit extra sugar in the dough that I didn’t like. 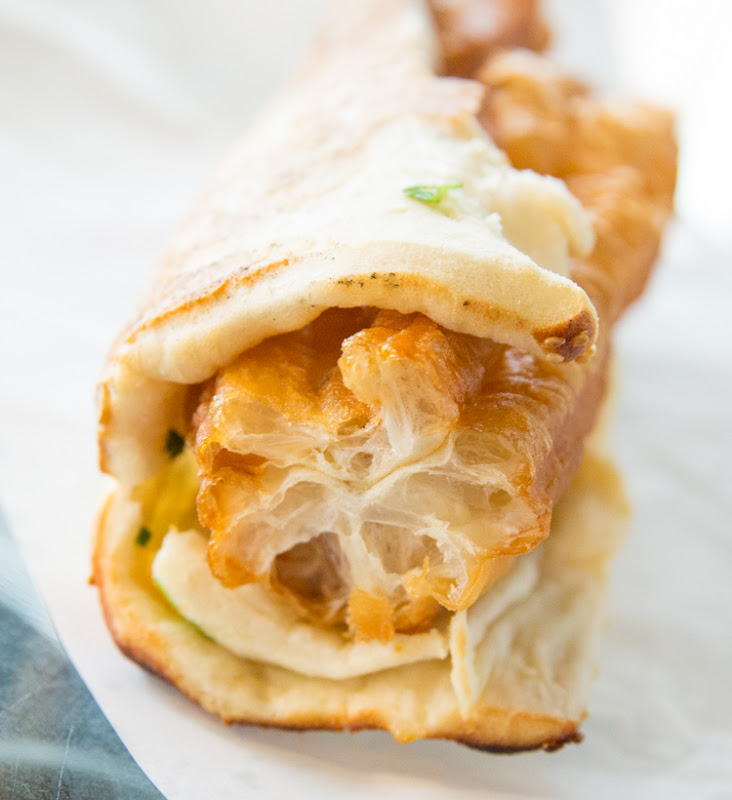 Fried cruller is another popular Taiwanese dish. The literal translation is “oil stick” as it resembles a stick and it is deep fried. It’s usually crunchy, light and airy. It’s often ordered with a shao bing wrap to absorb some of the grease or dipped in sweet or savory hot soy milk. 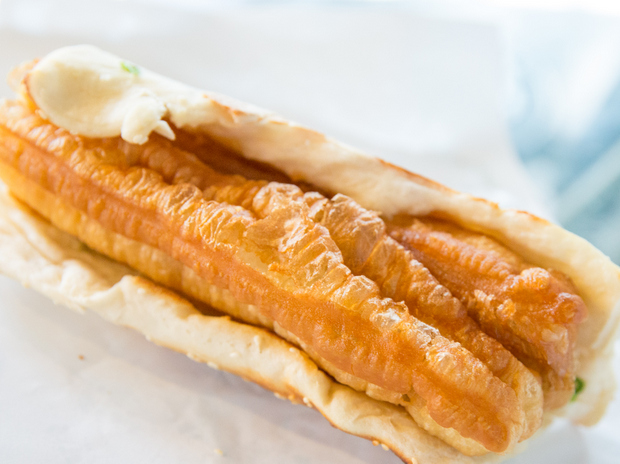 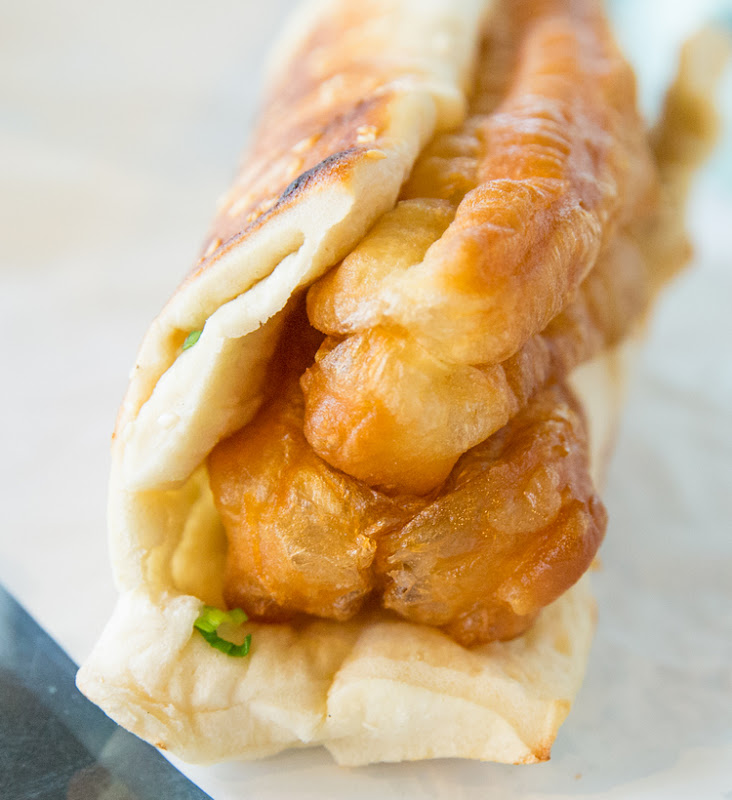 So we ordered the thick shao bing with the fried cruller. Perhaps we got a bad batch, but this fried cruller was a grease bomb. Yes, fried crullers are on the greasy side, but when made right, you don’t notice the grease. This was far too oily, making it heavy and chewy and not crisp enough. 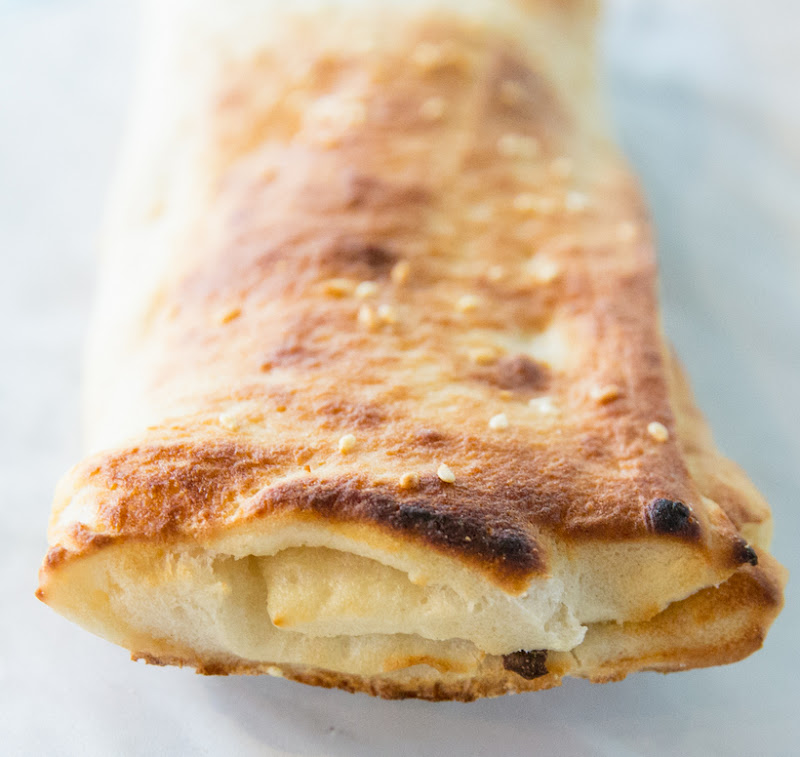 To compare, we also ordered the thin shao bing which is much more like the traditional version. It wasn’t nearly as pretty as the thick one and again, I couldn’t get over the odd sweetness.

Here are a few quick videos of them preparing the shao bing and fried crullers:

Overall, we left with pretty mixed feelings about this place. On the one hand, I can see why this would be a good tourist spot. If you’re visiting for the first time, it’s much easier to navigate to than the smaller vendors. I also like that you can watch everything being made while you wait to get the front of the line. However, I didn’t think the taste was worth the hype or the wait–especially if you’re a local or are staying with friends/family. I felt the quality for most of the items was just okay and better options could be found from the smaller vendors. 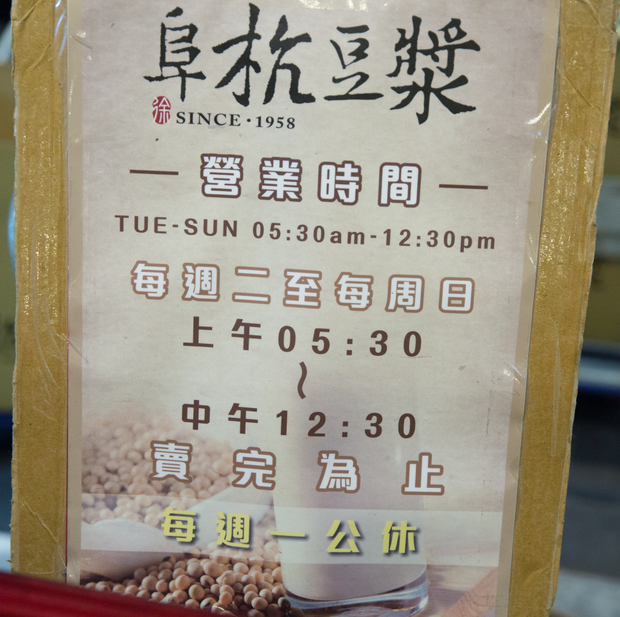 Here is the MRT stop you exit from. 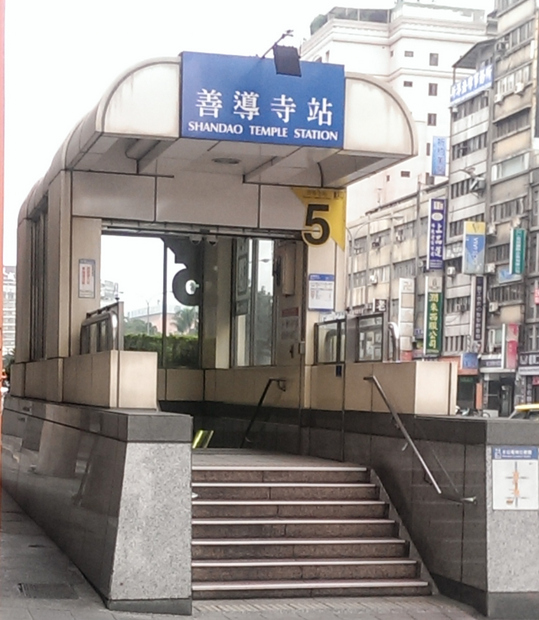 This is the front of the building: 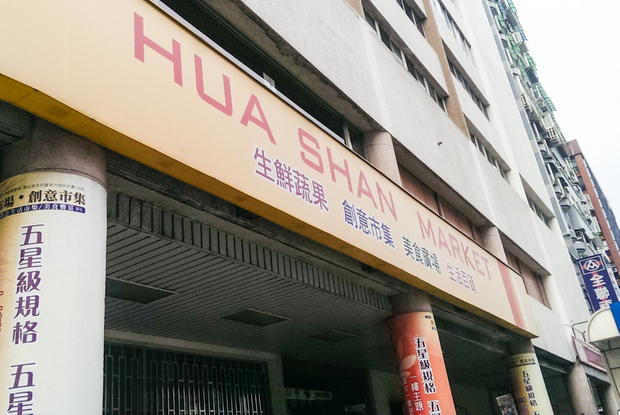 You go up the staircase on the left: 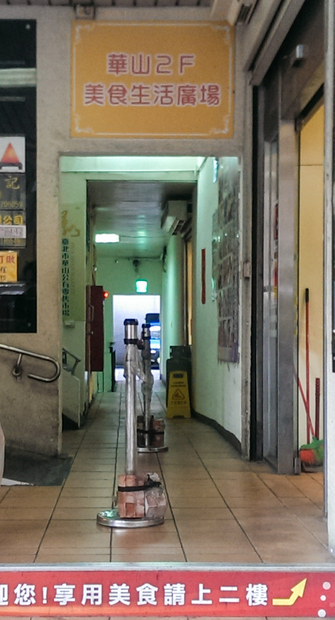 And you’ll likely be met by a line at the stairwell: 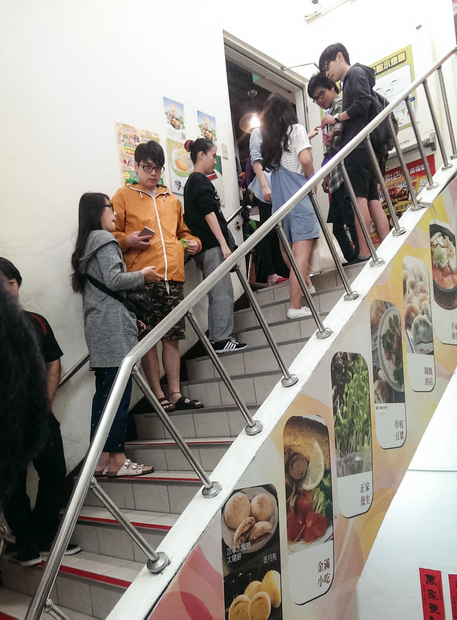