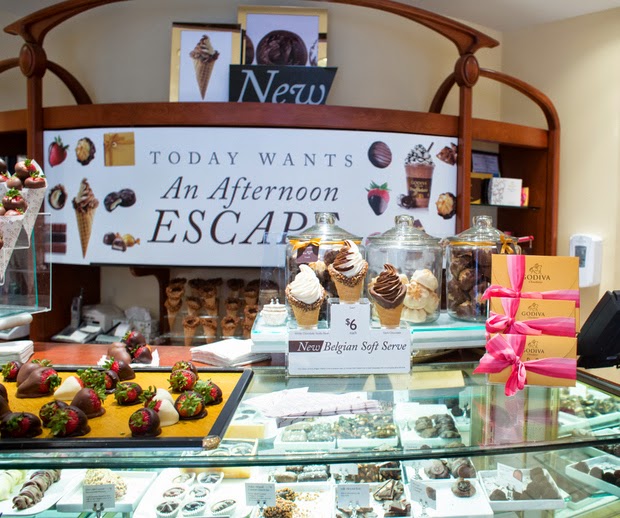 GODIVA introduced a new product this summer: soft serve ice cream. I don’t normally like to write completely negative posts, but sometimes I feel the need to warn as many people as possible. So here it is.

First, let me be clear. It seems the quality of the product really varies depending on location. The reason I even went to check it out was because a good friend of mine had posted a mouth-watering photo of his cone from the Glendale store and highly recommended that I check it out. So I went to the one closest to me, inside the UTC mall. 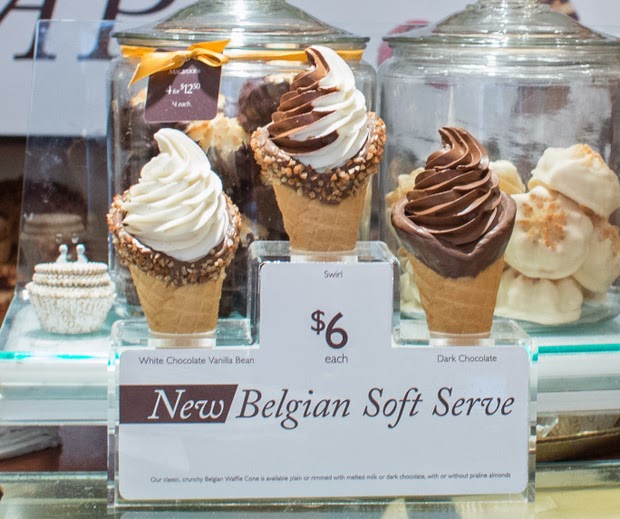 The soft serve is not cheap. It’s $6 a cone. But I’ve always enjoyed GODIVA chocolate and the ice cream is made with their chocolate, so I thought it might be worth it. Besides, take a look at my friends picture from the Glendale location he went to. Doesn’t the ice cream, especially the dark chocolate part of the swirl, just look ridiculously rich and delicious? I don’t normally even like chocolate ice cream, but this photo had me craving it. 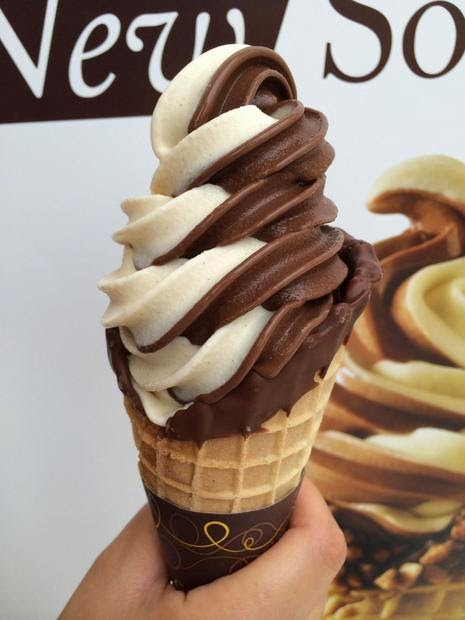 Mr. K and I each chose a cone. When the cones were handed over to Mr. K, I heard him murmur quietly “oh these look sad.”  I was distracted at the time, fumbling with my purse, so I only quickly glanced over and I thought he just meant that the ice cream wasn’t piled nearly as high or as pretty as the promo photo ones.

However, once he handed me my cone, I fully understood what he meant.

I took these photos seconds after we left the store. This is actually the prettiest angle: 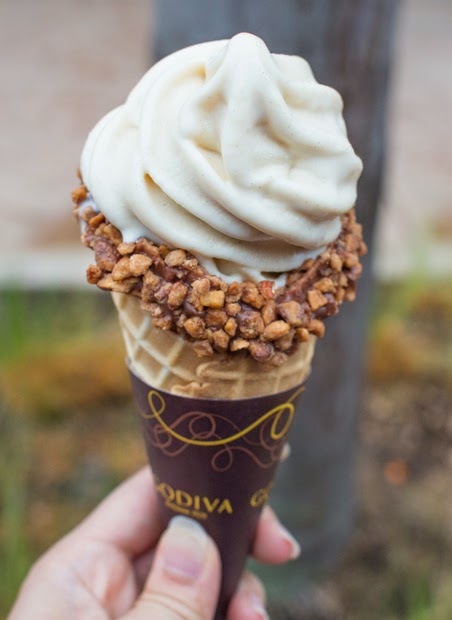 Already you can see it’s dripping. Gosh, I hate it when ice cream drips everywhere.  Ironically, the staff helping me highly recommended I get this flavor as opposed to the other ones. Here’s what it looked like from other angles, showing just how much it had already melted from the few moments of when we were handed the cones and when I walked outside to take these photos. It wasn’t particularly hot outside on this day either. 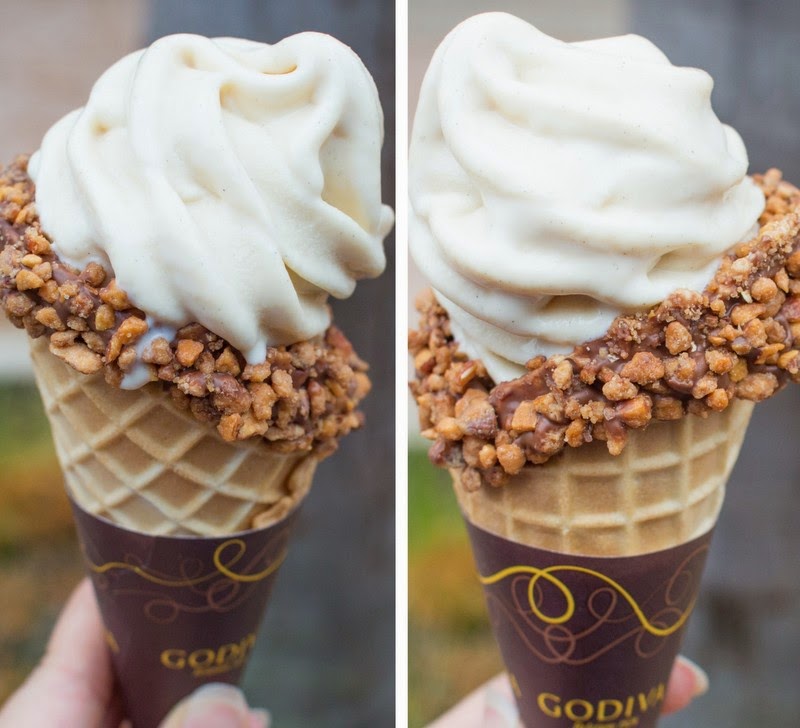 After a few bites, it was even worse. The melting was pretty much out of control and there was just a puddle of ice cream near me. Not only was it dripping from the top, but it was also dripping down through the bottom of the cone as well. I would have taken a photo, but my hands were very sticky.

I was really appalled by how poorly the soft serve was made. The watery texture was similar to the soft serves you get at cheap Chinese buffets. I had much higher standards for GODIVA, especially at $6 a cone.

The one saving grace was the waffle cone itself. The cone was quite pretty and the chocolate rimmed parts were crunchy, though the cone parts without any chocolate weren’t nearly as crisp and seemed like they could have used a little longer time in the oven (you can even see from the photo above how parts of the cone are quite pale). At the bottom, there is more chocolate, similar to an ice cream drumstick.

Mr. K got the swirl version, which fared slightly better. 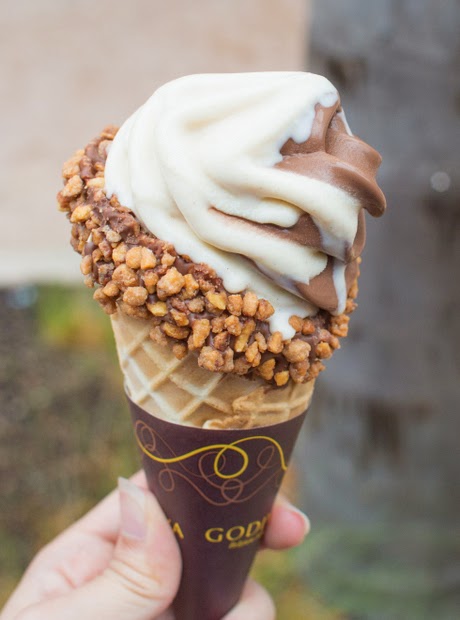 It seems the white chocolate was the biggest issue as the dark chocolate part of the swirl did hold up better. Still it was a sad sight with the vanilla dripping all over. 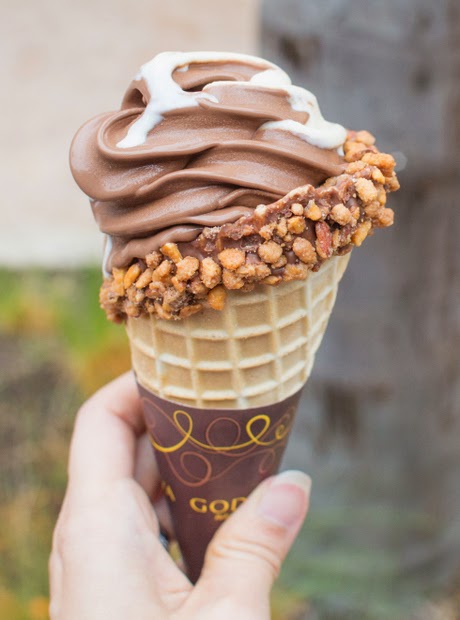 We also redeemed our free piece of chocolate as being part of their rewards program. I chose the passion fruit truffle. 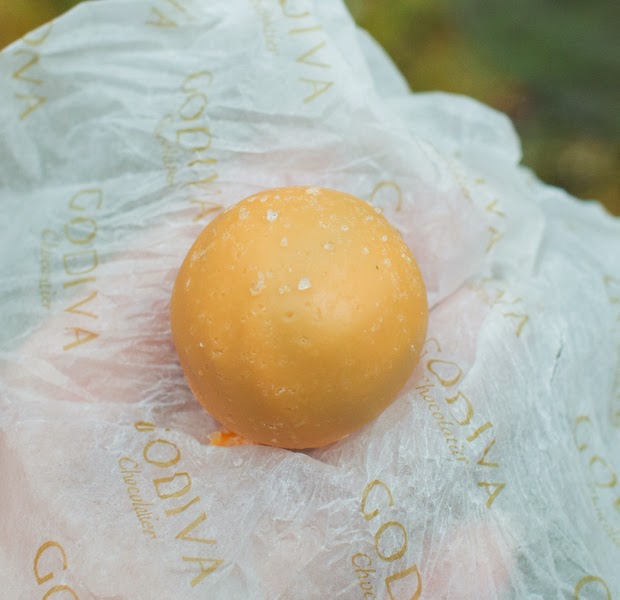 Overall, this was extremely disappointing. If you want to try GODIVA’s new soft serve for yourself, I do not recommend visiting the UTC location. The one my friend had that turned out well was from Glendale.

GODIVA is also doing a few promotions to make the price a little cheaper. They have a frequent stamp card, where after you buy 6, you get 1 free. Also during weekdays they offer “happy hour” between 3pm to 7pm and if you buy one soft serve you get the second half off. Only select GODIVA stores are participating and offering the soft serve, so check their website for stores near you which offer it.