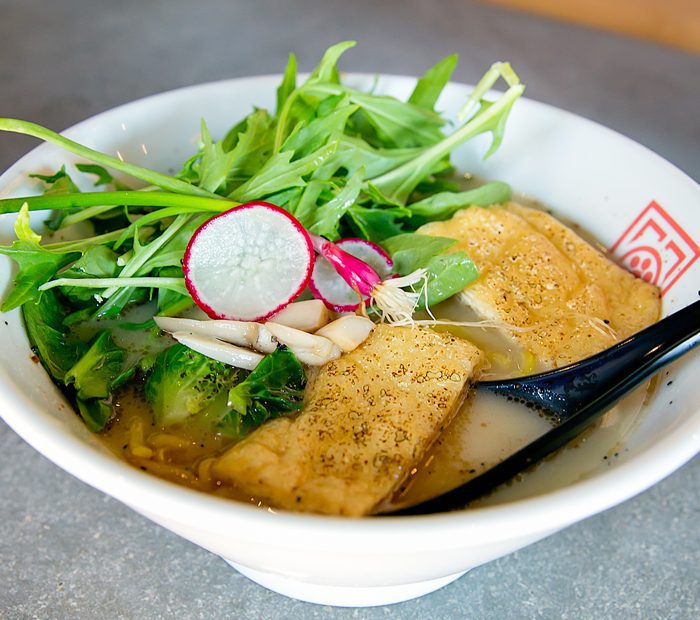 Hachi Ramen opened recently, replacing Artisan Bento. The restaurant is still under the same ownership but with a new concept and a remodeled dining area.

I had enjoyed my previous visits to Artisan Bento, so I was definitely curious to try the new ramen-centric menu. 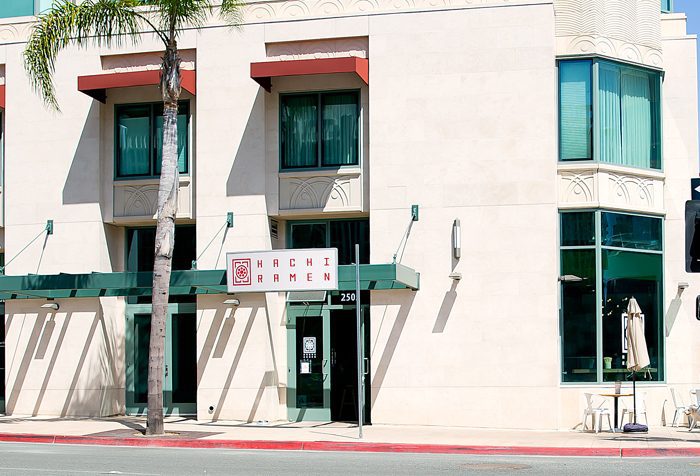 In addition to several ramen offerings, the restaurant also offers appetizers ranging from steamed buns to a charcuterie board. They also have sushi rolls, salads, rice bowls, and crudos. And if you’re in the mood for a drink, they offer craft cocktails, beer, wine and cold pressed juice.

To be honest, some of the aforementioned menu items would normally have me worried, but Artisan Bento did a remarkable job of balancing the classic with the contemporary, so I had the same expectations for Hachi Ramen. 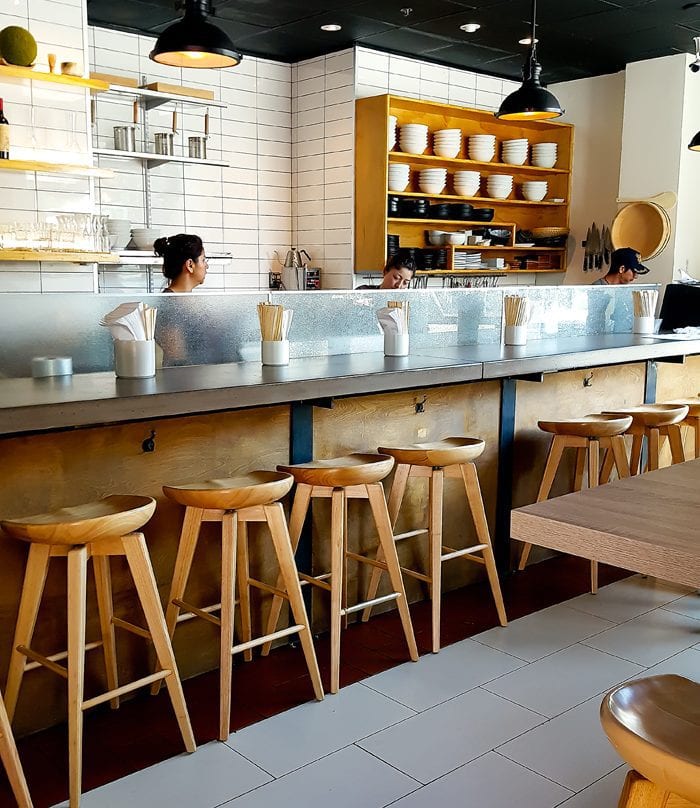 When we entered, we first had to wait in line to order before grabbing a table. This was the set-up when the restaurant was Artisan Bento and it made sense since most people were getting food to-go, but I don’t think it works as well for a sit-down restaurant. 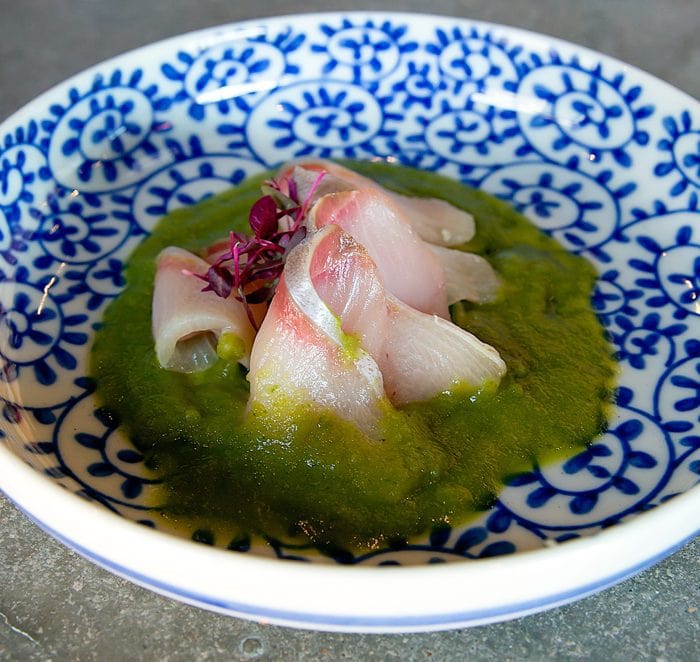 We chose this to start our meal. I was a little disappointed that it looked nothing like the presentation in a photo the restaurant had posted, but it was enjoyable.

The thick slices of hamachi sat on a bed of thinly sliced cucumbers, marinating in a cold pressed lemon juice, shiso and chile puree. It was light and refreshing and a great start to our meal. 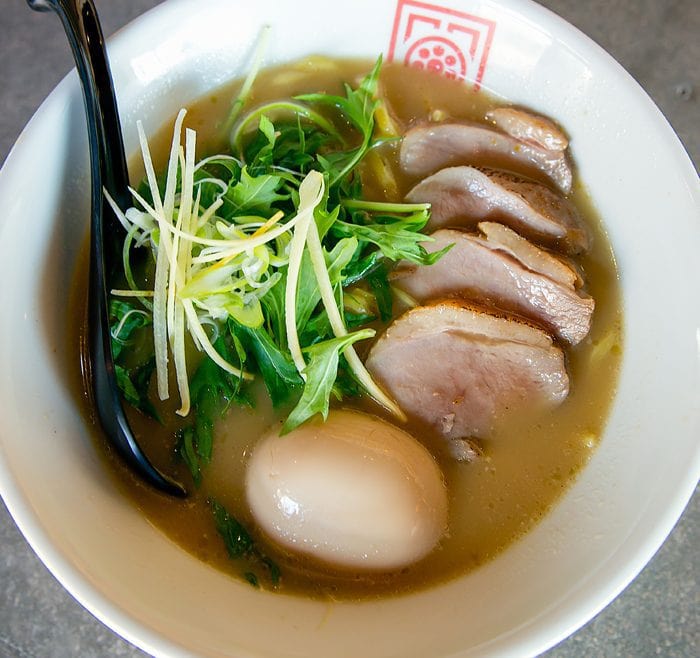 The duck was the star of this bowl. It was wonderfully tender and soft, like no other roasted duck I’ve tasted. I found the texture to be similar to a sous vide cooked duck but I was told that they do roast and marinate it for several hours to achieve the melty texture.

The noodles used were thick and wavy. They had a lovely chewy texture and bounce to them. 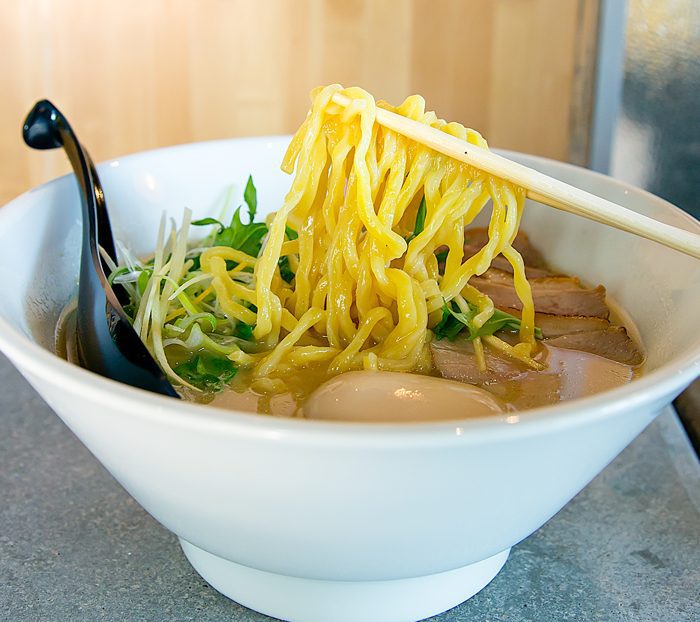 Unfortunately, I did find the broth to be far too salty for my liking. The foie gras oil was barely detectable, and I found myself drinking several cups of water before and after my meal. 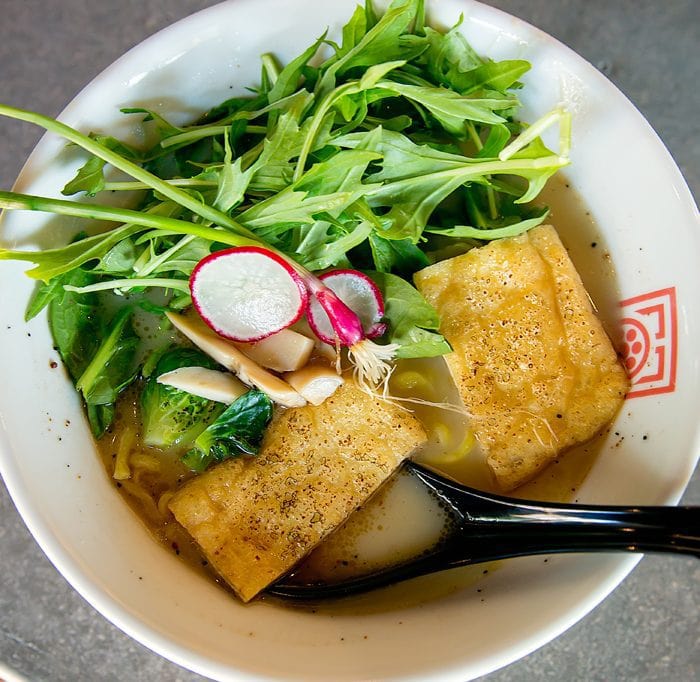 It’s not often that we’ll select the vegetarian offering on a menu, but again, I was drawn in by the photos I had seen of this bowl. Much like the hamachi, our bowl did not look quite as pretty as the photos we had seen. I was also a little irked because the squash blossom listed on the menu and so prominently featured in their photos, was nowhere to be found.

However, I was glad we ordered this. The shitake mushroom based broth, mixed with soy milk and black garlic oil was flavorful, creamy, fragrant and well-rounded. I’m not usually satisfied by vegetarian broths, but this one was quite savory and I preferred it over the chicken soy broth.

The toppings were a mix of raw bitter greens and silky blistered fried tofu. We could have done with a little less bitter greens, but the general feel was light and enjoyable.

Overall, we had a pretty good first meal at Hachi Ramen. I’ve always enjoyed the use of seasonal ingredients at Artisan Bento and that continues to be the practice for Hachi Ramen. While some of the menu offerings seem out of place for a Japanese ramen bar, I think Hachi manages to successfully infuse culinary trends into the classics. Nothing is quite like the traditional but the dishes still feel Japanese.

However, along with seasonal ingredients and modern techniques comes a price and Hachi Ramen is definitely priced higher than the average ramen restaurant in San Diego. I don’t think it’ll replace my love for Menya Ultra anytime soon, but it is nice to have a different option. 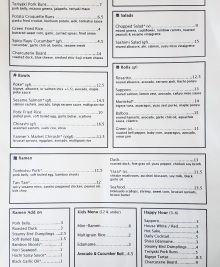 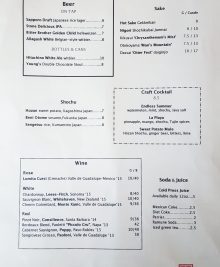