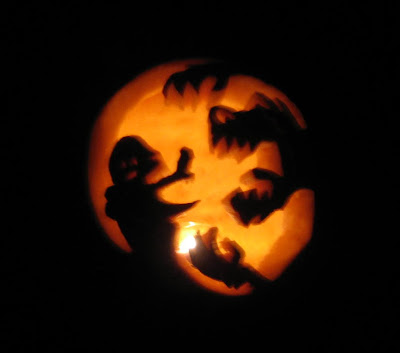 While I spent the last weekend baking up a lot of pumpkin recipes, Boyfriend was doing some pumpkin making of his own.  His work was having a pumpkin carving contest, and he wanted to enter.  He showed me all these elaborate sketches.  I had my doubts since he had never carved a pumpkin before.

So while I baked, he quietly worked on his pumpkin.  I was so surprised with his finished product!  And very proud.  He went on to win the category of scariest pumpkin at his work! Horray!

The only bad thing is that he didn't do much research into how to preserve the pumpkin before he started his carving, so the pumpkin has pretty much died.  I wish we had done the research beforehand so that it could last at least through Halloween.  Oh well.  Now we know for next year.  Of course, since he was so successful with this one, he has been wanting to go out and buy tons of pumpkins to carve. Happy Halloween everyone! 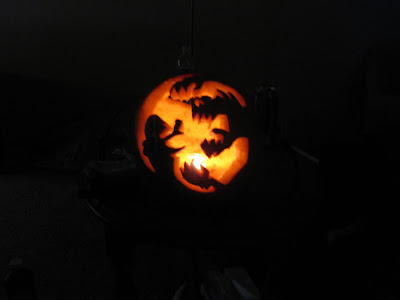