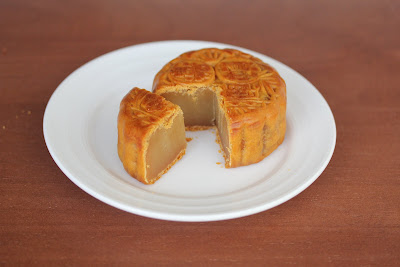 During this holiday, it is tradition to eat mooncakes. If you've been to a chinese supermarket lately, you've probably seen the large display of these little desserts, which are usually tucked inside elaborately decorated boxes (I always keep the boxes to store stuff.) 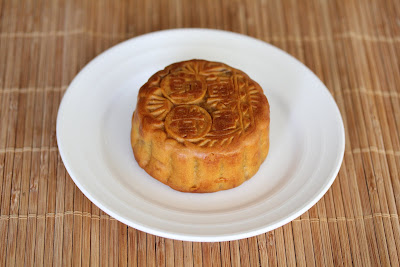 Last year, I went a little overboard on buying mooncakes, so this year, I decided to keep it simple. Since mooncakes are not very healthy and a bit on the pricey side, I limited myself to a single mooncake. Normally, I buy a box, invite people over and we cut the cakes and serve it with tea. The problem is, I seem to be the only person who really enjoys mooncakes and then I end up eating way too many. 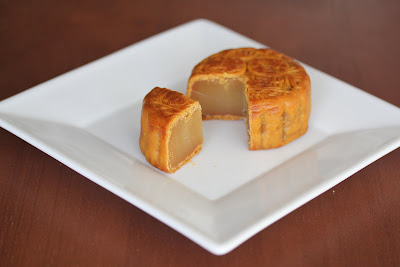 In many parts of Asia, this holiday is celebrated with lantern decorations, a lot of food, dragon dancing, etc. The mooncakes offerings have also gotten more elaborate and expensive through the years. I've seen several asian blogs that showcase the intricate mooncake designs that come out each year. Unfortunately, I have not seen them in the US. In the US, I've only seen the traditional golden brown mooncakes. 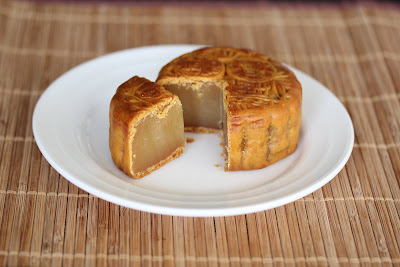 There are many myths and legends surrounding the Moon Festival. Almost all of the tales end with a person being up on the moon. It is said that on the day of Moon Festival, the moon is especially big and bright, and so people often search to see if they can see this person who lives in the moon. I remember searching in vain when I was a little girl.

Mooncakes traditionally have a round shape. They are golden brown in color. The outside is a thin layer of skin, and it is mainly made up of filling. The most traditional fillings are red bean or lotus paste.  The most expensive mooncakes are usually white lotus paste with a double egg yolk in the middle. 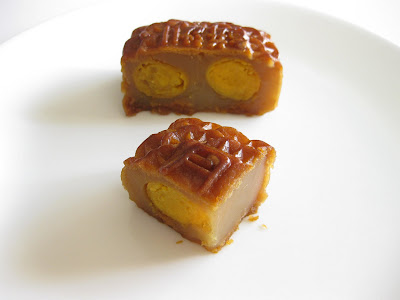 Mooncakes are very sweet and are traditionally served with hot tea. I've always thought it is ironic that the mooncake is a chinese dessert. Coming from a chinese family, my parents are always complaining of desserts being too sweet or too rich. Most chinese desserts are very light and not that sweet. Chinese cakes are usually like chiffon cakes, and the breads are also lighter and airier. Chinese people also are very health conscious.  They eat a variety of herbs and ingredients because of the health and medicinal benefits.

And yet the mooncake seems to represent all the things that chinese people don't like in food. It's extremely sweet (most people can only eat it in small quantities) and extremely unhealthy. My mom is constantly warning me not too eat too many. 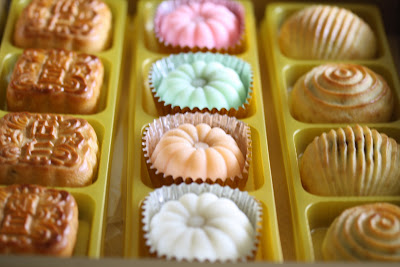 You can read more about the different Moon Festival myths here.  You can see my post from last year here.