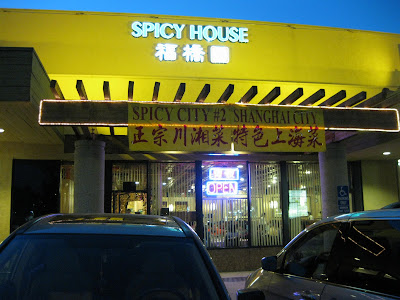 I’ve been wanting to try Spicy House since it opened over a month ago, but something always came up, and so I didn’t get around to it until this past weekend. Occupying the former Shanghai City, the signs hanging from this new restaurant can make things very confusing. The name of the restaurant is “Spicy House,” yet two signs hang below saying “Shanghai City” and “Spicy City #2.”

So which is it? Is it related to the other Spicy City? Is it still Shanghai City? The answer is yes, sort of, and more. Heh. So here’s the rundown as I know it (and confirmed from talking with the one of the owners). Spicy House is owned by the owners of Spicy City and the former owner of Dede’s (he sold Dede’s, and it’s now under new management. He also owns A Cafe with someone else.) They decided to keep the chef from Shanghai City, so the menu consists of some of the Shanghai city dishes, the majority of Spicy City’s menu, some of DeDe’s menu and some dishes I don’t recall seeing before on any of the menus.

The result is a large location, with lots of menu offerings, and customers visiting who are fans of DeDe’s, Spicy City and Shanghai City. When I arrived on Saturday night, the restaurant was packed with quite a wait out the door. Obviously the formula is working.

One thing I noticed when I entered was that the restaurant needs a better ventilation system. Or they need to turn on their air system. People in the waiting area were coughing up a storm because the breathing air was clouded with spiciness.

The other thing that needs work is the staff. The staff seems unable to handle the busy crowds. Perhaps they need to be trained by the Spicy City employees, who always seem put together and amazingly efficient with that busy spot.

After being seated, we had no menus or silverware. The waiter noticed, left to get it, then promptly forgot about us until he came back around again. We finally got our silverware, and then had to order water about four times, each time from a different employee, before finally getting some from the former DeDe’s owner. As one of my dinner companions observed, the staff here are like goldfish with a seven second memory retention. None of them could seem to remember any of our requests.

When we finally got our menus, I was overwhelmed by the large selection. It was hard to choose, but in the end we opted to try some new dishes that we don’t normally order at the other spicy chinese restaurant locations in San Diego.

Like its counterparts, Spicy House offers a select choice of cold appetizers up at the front next to the register. You can order a plate of three for $5.50. I thought the selection was really small compared to Ba Ren and Spicy City. We ended up ordering a thinly sliced spicy beef tender dish, seaweed salad and marinated gizzards. I wasn’t very impressed with the cold appetizers, but they were alright. 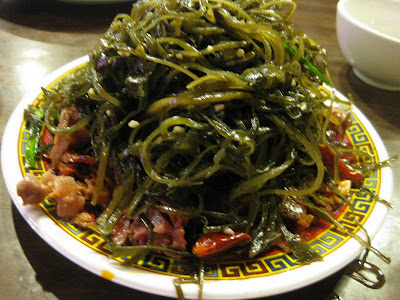 I had been searching the menu for a dish that Kirk of mmm-yoso ordered, a fried eel dish, but I couldn’t find it. Perhaps I missed it. Anyhow, with my mind stuck on eel, I decided to order a braised eel dish. 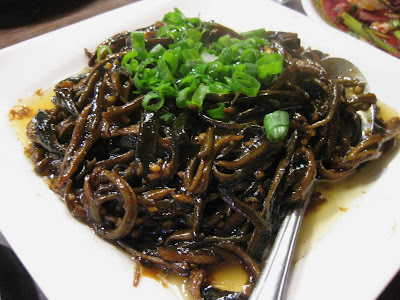 The dish was pretty large and made up entirely of eel, to my delight.  It was cooked in a brown garlic sauce. The sauce was slightly too sweet for my taste, but other than that, I enjoyed this dish.

We also ordered the cumin lamb. This dish seemed much smaller. The cumin taste was really strong. The spiciness level was a bit too mild for me. 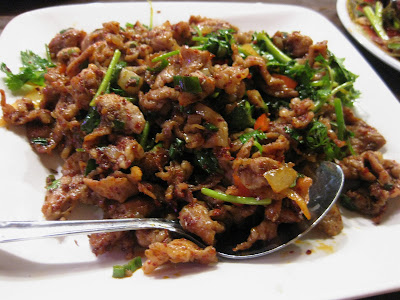 We also ordered a fried chicken cubes with hot peppers. This is one of my favorite dishes to order at Ba Ren. It is usually cooked with so many peppers that the chicken pieces actually numb your mouth with spiciness. It burns, but once you get used to it, the chicken starts to taste sweet. It’s an addicting experience. The chicken here was not cooked with enough peppers. It wasn’t that spicy and the peppers didn’t really seem to seep through the batter. 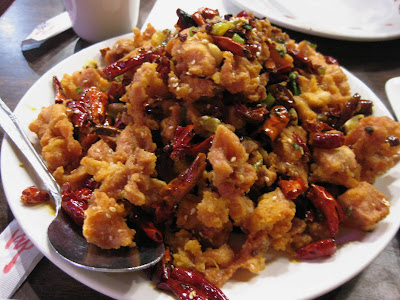 Our final dish was a seafood soup stew. There were pieces of fish, squid, shrimp and it was served in a broth with glass noodles. 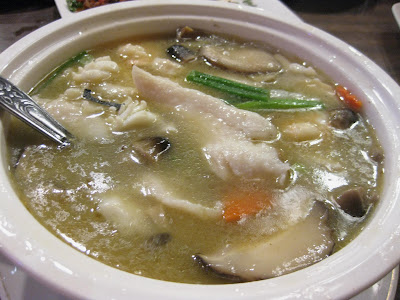 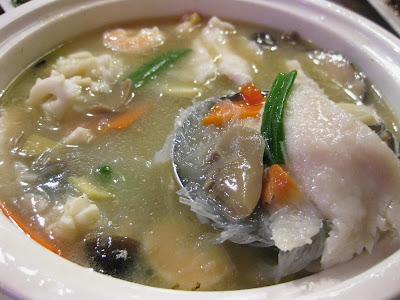 I’m not quite sure where I rate Spicy House yet compared to the other offerings in San Diego. I need to come back a few more times and try some more items out, especially the usual items I order. Ba Ren is definitely still my favorite. I think I may rank this spot above Spicy City only because the menu offers more and there is a lot more space.

You can read mmm-yoso’s posts on Spicy House here and here.

You can read A Radiused Corner’s post on Spicy House here.