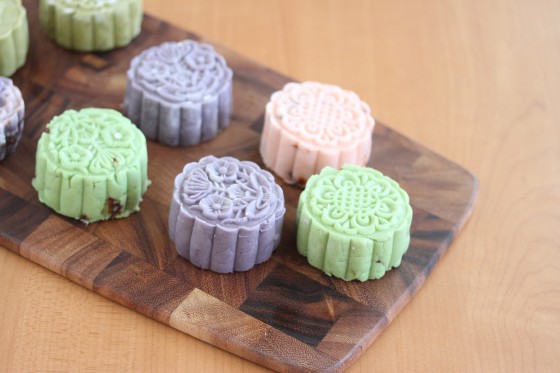 Today is the Mid-Autumn Moon Festival, which to me, just means I get to eat mooncakes! I’m going to keep this really short. I just wanted to wish those who are celebrating, a Happy Mid-Autumn Festival! Hope you get to enjoy some mooncakes and tea with your family and friends.

This year I was determined to make my own mooncakes. After much stress and headache, I finally produced these colorful snowskin mooncakes. Snowskin mooncakes, I believe, get their name from the skin, which is white in its original flavor form. They are soft, a little chewy and really pretty. I like them mainly because you can do many different flavors and colors.

They aren’t actually that hard to make, but it was just hard to figure everything out especially when I couldn’t find all the ingredients and instructions from other blogs were quite vague. I’ll be doing a detailed recipe post later for those who want to attempt it and hopefully people won’t make the same mistakes as me.

I’m also currently trying to make traditional mooncakes. So far, I’m finding it easier than the snowskin ones. Unfortunately, they won’t be ready to be consumed tonight because you’re supposed to let them sit 2-3 days. Which I didn’t realize until I finished making my first batch. Oops.

Now that I know how to make them, hopefully I can make them ahead of time next year and give them as gifts. You can read my explanation of the holiday and mooncakes a little more in my old annual posts: here, here and here. Hope everyone is having a great weekend!