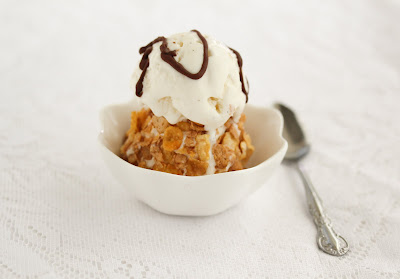 I love Mexican fried ice cream. I get it every year at the County Fair and whenever it’s on the dessert menu at a restaurant. Creamy vanilla ice cream encrusted with a cinnamon crunchy exterior and drizzled with chocolate and whipped cream, what’s not to love? 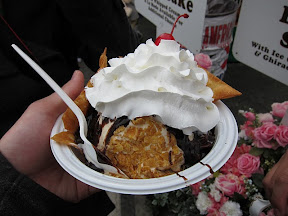 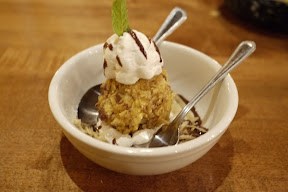 It’s funny how the idea to make this came about. It all started with my Starbucks giveaway post. A reader I’ve mentioned in the past, Meryl aka Chocolate Goddess, left me a comment on the post suggesting I try Starbucks’ line of ice cream available at most grocery stores. Since I’ve loved all her other suggestions, I immediately put it on my grocery list (And she was right. I loved the vanilla frappuccino and the java chip ones I got) and we emailed back and forth about it for a while. 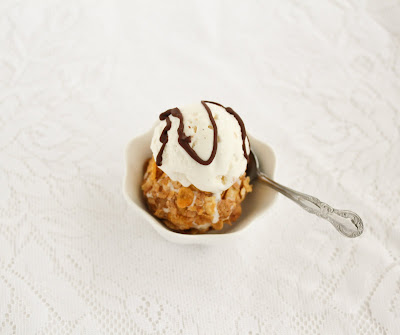 She then included a recipe I could use with the ice cream, for a Mexican Sundae, which contained bits of shredded coconut and a cinnamon chocolate sauce. This then reminded me of my love for Mexican fried ice cream and I came to the realization that I could recreate my own Mexican fried ice cream based on ones I’ve eaten in the past, plus I wanted to add incorporate the cinnamon chocolate sauce.

I played around with it this weekend, and then came up with this. You can of course douse the ice cream in whipped cream and top with a cherry like I’ve seen before, but I wanted to show the fried ice cream. I also opted to not put whipped cream and instead added another scoop of ice cream because I really love my ice cream. I tried this with cornflakes and then I tried it again with the flakes from Honey Bunches of Oats. I preferred the latter because of the different flakes, but either one works. 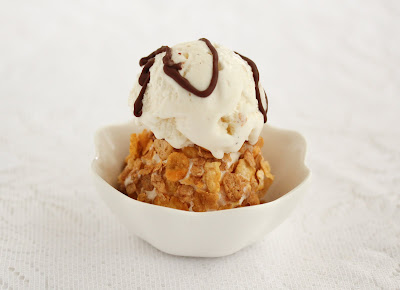 This was delicious and so easy to make. Now that I know I can make this at home, I can save myself some money, especially with the fair just a few weeks away.

Did you make this recipe?I'd love to see it! Mention @KirbieCravings and tag #kirbiecravings!
Posted in: Ice Cream, Recipes
7 Comments // Leave a Comment »