With the weather warming up, there’s been quite a few new ice cream products that have debuted.

Since I love ice cream, I always feel compelled to try every new one I hear about. So here is a round-up of ones I’ve tried so far. 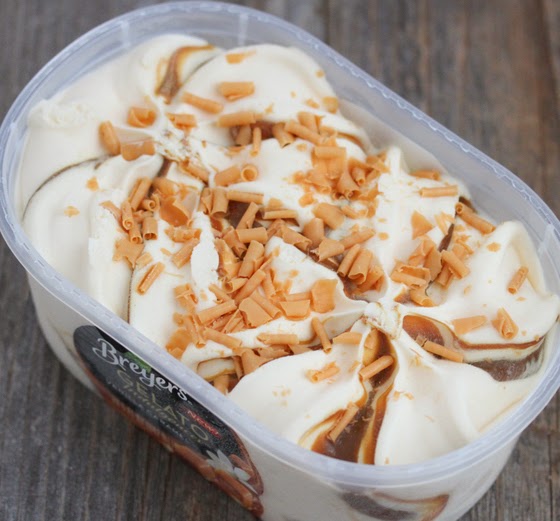 A few months ago, Breyer’s came out with their line of gelato. I was initially drawn in because of the beautiful swirls of the packaged boxes, which resemble the way the fresh ice cream is shaped when you get it at gelato shops. 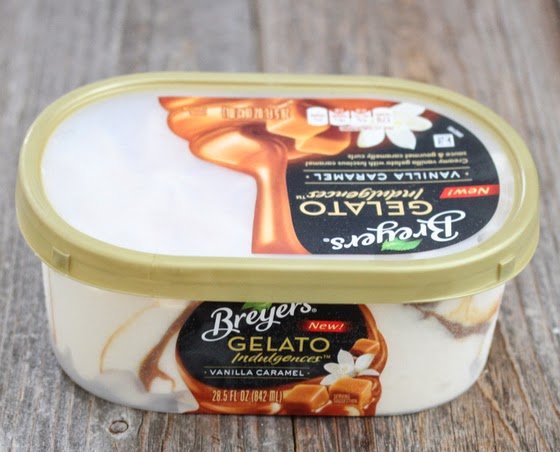 I chose the caramel flavor. The texture was soft and creamy. However, it was also very airy. It actually tasted more like a packaged version of soft serve ice cream rather than gelato, which traditionally has a dense and creamy texture. While it was enjoyable, I really didn’t feel like it tasted like gelato. There are currently four flavors available (Vanilla Caramel, Raspberry Cheescake, Tiramisu, and Triple Chocolate) but I’ve only sampled the vanilla caramel. 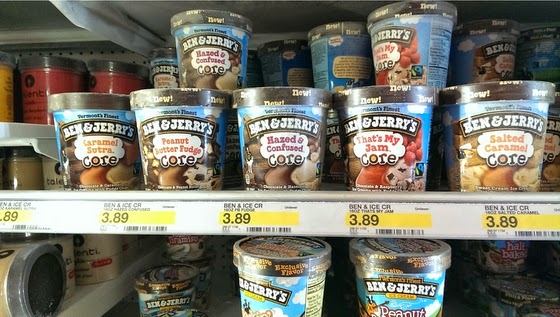 Ben and Jerry’s recently came out with a Core collection, combining two different flavors along with a core center. This new product seems to have gotten the most attention I’ve seen for a food product in a long time. Heck, even the entertainment news sources I read were covering it. There are five flavors (four new and one older one that has been around but now packaged into the Core collection). I was stalking my supermarkets incessantly trying to find them until a tip from EJ led me to Target, which carries all the flavors.

I started out with the Salted Caramel and Hazed and Confused. 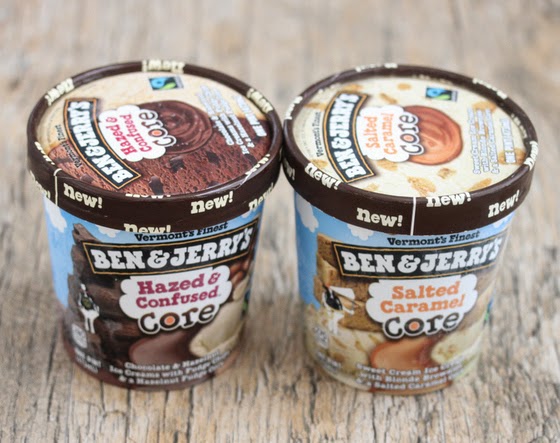 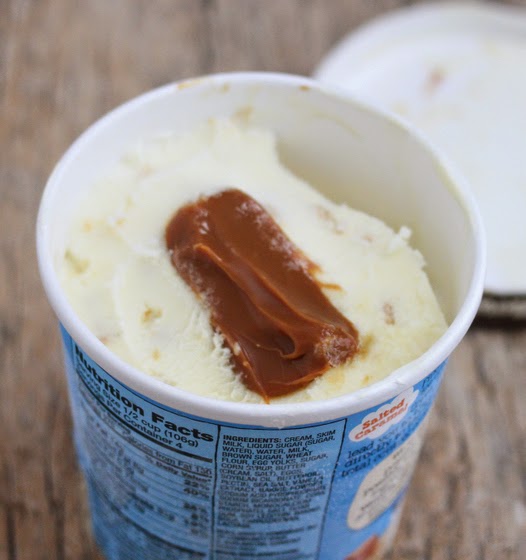 Yes, I had a few big bites before taking this picture. This one consists of sweet cream ice cream with blonde brownies and a salty caramel core. Out of all the Core ones, it’s the only one that only has one flavor of ice cream rather than two and I think that’s why I wasn’t as excited for this one. I almost felt cheated without that second flavor. As an ice cream, it’s good, but I felt like I was missing out without an additional flavor. 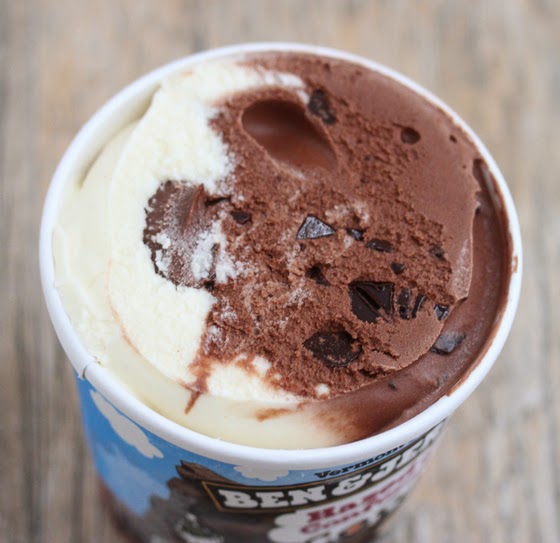 This one consists of chocolate and hazelnut ice creams with fudge chips and a hazelnut fudge core. Eaten together, you do get something like Nutella.

Quite a few people told me that Peanut Butter Fudge was the best one, so last weekend I went back to get that one. I thought I had gotten it, but then I got home and realized I had somehow picked up another hazed and confused.

So far, I’m enjoying the concept of being able to get two flavors within one. The core center is a little too sweet for me but I do get the appeal, as it’s like eating an ice cream sundae.

And right now Ben & Jerry trucks are traveling across the country, making various stops and giving away free samples of the Core collection. You can find out more of their schedule here. The first city stop for the West Coast truck is actually San Diego. They’ve been here a little under a week and will be around for about another two weeks. I actually only found out because I was reading my twitter feed and read this: 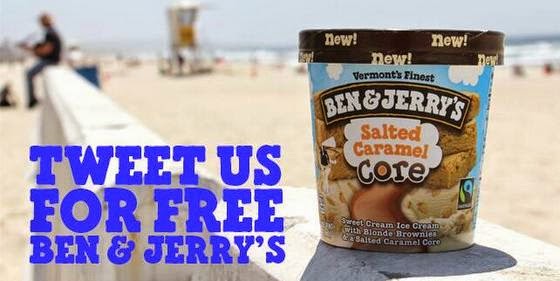 I immediately sent them a tweet with a location just to see what would happen. And a few days later, I got an awesome mid-day work surprise when they showed up at the address I tweeted and scooped enough ice cream for everyone in the building. 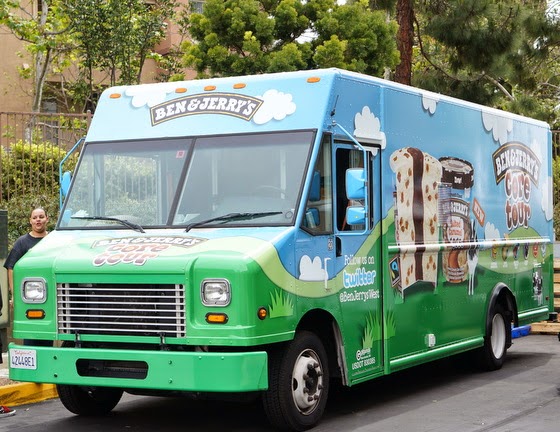 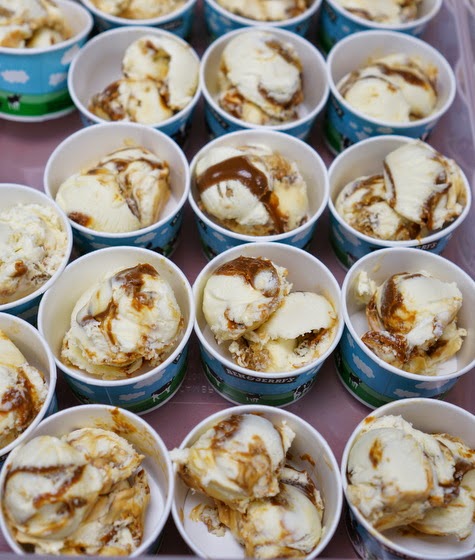 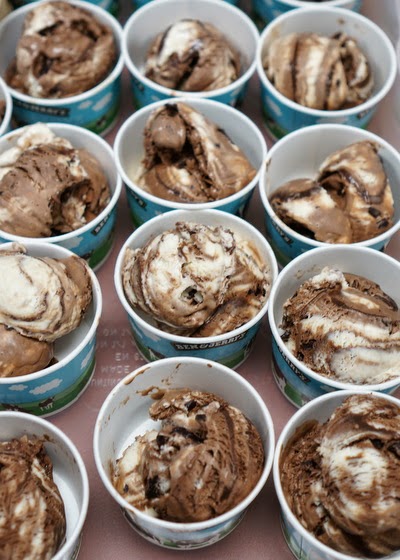 The only bummer was that the flavors they had available that day were the two I had already tried. I had been hoping to try some of the other Core flavors. But I’m not complaining too much. After all, I got a scoop of free ice cream! 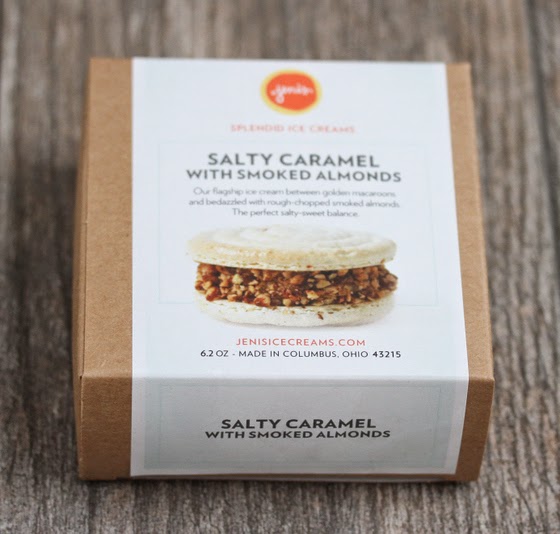 My love for Jeni’s ice cream has been well documented on this blog. Last year, I remembered reading that Jeni had come out with a giant macaroon ice cream sandwich. (As a quick little side note, it was driving me nuts to see the French macaron spelled macaron and macaroon, so I did a little research and this is my understanding. While macaroon often refers to the coconut dessert cookie that is popular in the US, those are coconut macaroons. But the word macaroon, by itself, is the American spelling of macaron. Most shops that make the nut based meringue cookie use the French spelling macaron, but some places do use the macaroon spelling.) 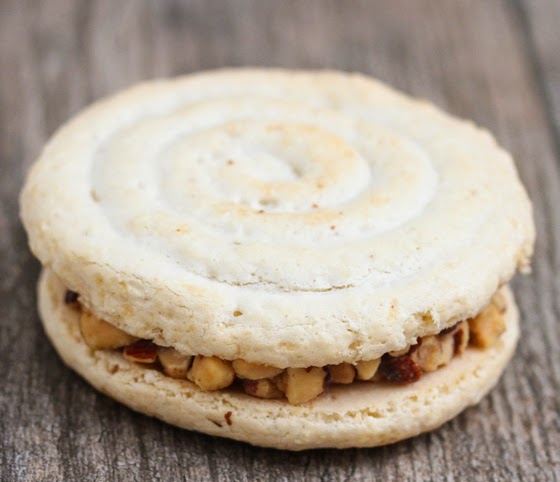 Reader Soo emailed me that Jeni’s Macaroon Ice Cream Sandwiches was now available at Bristol Farms and Whole Foods, so I popped over one day to get one. While Jeni’s has quite a few flavors, the only one carried at Whole Foods was the salty caramel one.

I loved how big this dessert was. It was a bit too indulgent for me to finish in one sitting. The macaroon cookie was light and airy. A little too airy and crumbly for my personal taste. The salted caramel ice cream was still quite sweet, and like many of Jeni’s ice creams, extremely rich and creamy. It’s sprinkled with chopped almonds for an added crunch.

Well that’s it for now. Did I miss out on something delicious? Hope everyone has a great rest of the weekend!