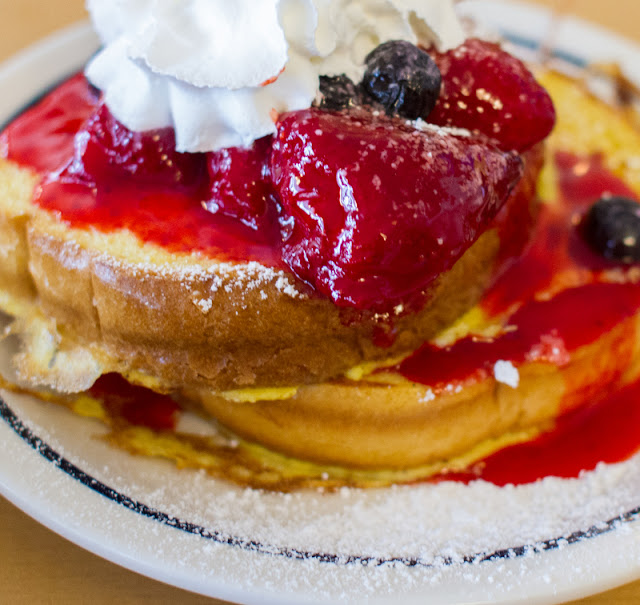 The other morning, I had the tv on while getting ready for work when IHOP’s commercial came on. Having not had breakfast, I really wanted to try the brioche french toast. I made a mental note that Mr. K and I needed to go soon. Then during a break at work, I checked my email, and there was an invitation for me to try out IHOP’s brioche french toast and to do a giveaway on my blog so a lucky reader could try it too.

As soon as I received my gift card in the mail, Mr. K and I went to our local IHOP try it. Since IHOP is 24 hours, I didn’t have to wait for breakfast hour. And who doesn’t love eating breakfast for dinner? After eating at so many nice brunch places lately, I’ve forgotten how cheap the prices are at IHOP.

The solo brioche French toast is $4.99 a plate. You can get it with eggs, hashbrown and sausage or bacon for only $5.99. There are various other combinations too, all for less than $9.

They offer three flavors of the brioche toast: berry berry, peaches and cream, and banana foster. 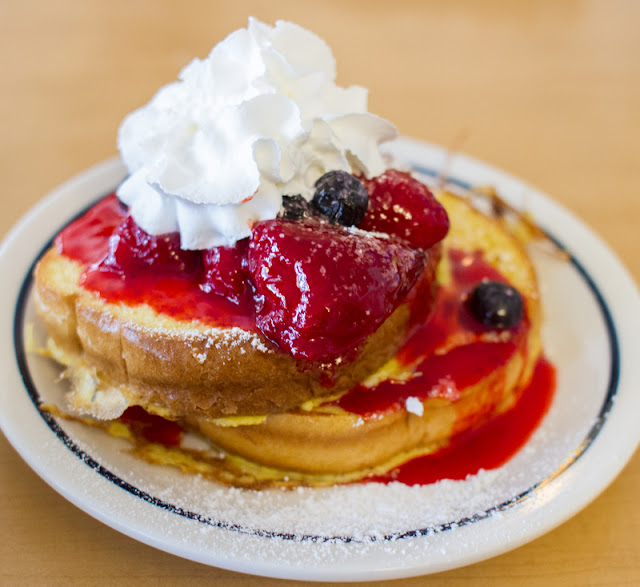 This looked so visually appealing on the menu and I was happy to see a similar looking plate before me. Lots of blueberries and strawberries over a strawberry syrup. The brioche French toast was just how I imagined: fluffy, soft bread, lightly coated in egg. It was a little heavy on the syrup and next time I might ask for it to be on the side instead, but the French toast itself was delicious. I have to say it was even better than I expected. I thought it was as good as some of the brunch places I’ve been going to that charge $9-10 a plate. 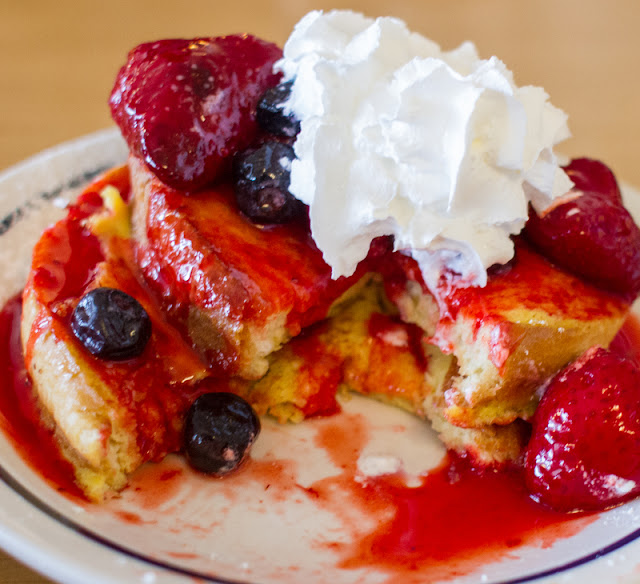 I added the combo, which came with hash browns, two sausage links and eggs. Not bad for $5.99. 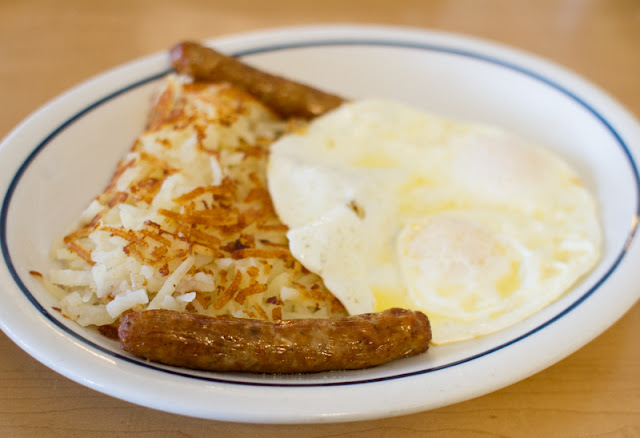 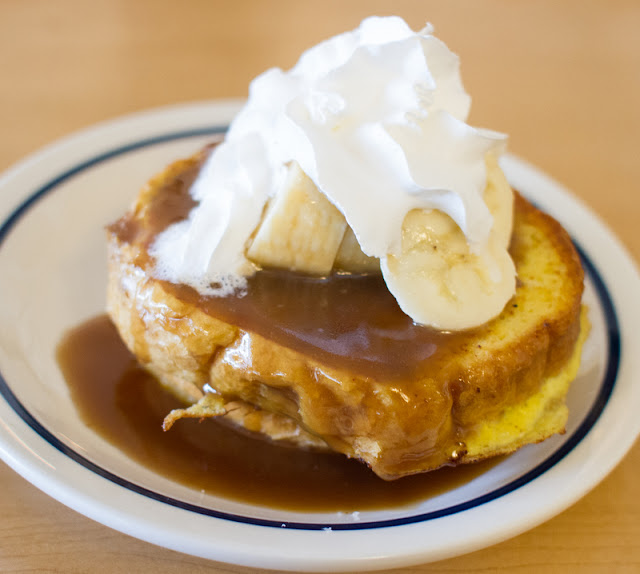 This one didn’t look as good, but we loved the banana foster sauce and the slices of banana.  I preferred this sauce over the berry sauce.

We didn’t think we would have room for the peaches and cream, but we’ll definitely come back next time to try it because we were quite happy with the French toast we did eat. 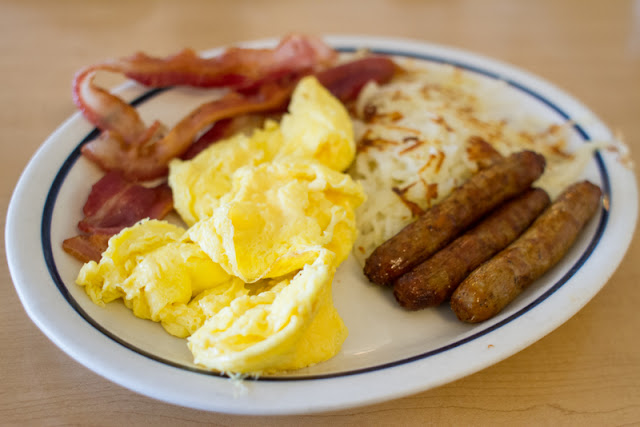 Of course Mr. K had to get the ultimate sausage bacon egg combo (for a total of a mere $8.69) which included two strips of bacon, three sausage links, eggs, and hashbrown.

We had a pretty good French toast experience here. The brioche french toast more than surpassed our expectations. The menu item is only available for a limited time, until June 2. We have plans to come back again to get the peaches and cream. 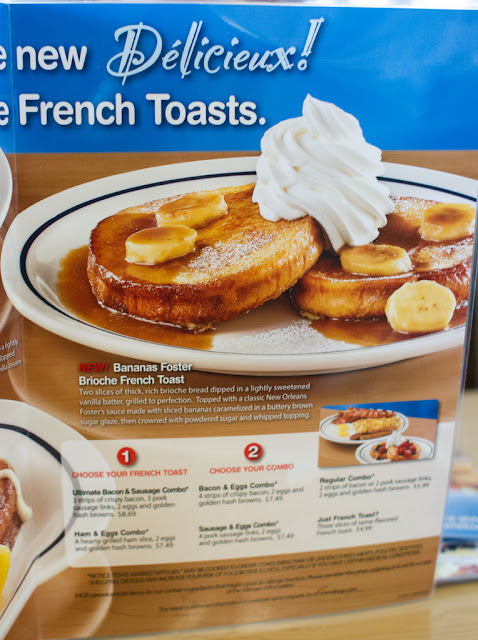 Now onto the giveaway. One lucky reader will receive a $25 gift card to IHOP to try the Brioche French Toast (or anything else on the menu). With $25, it should be more than enough to try all three or take a few friends and family along. This giveaway ends Thursday May 16, 2013 at 11:59 PM PST. I will choose one winner using random.org. Please note, this giveaway is open to US readers only. To enter, leave a comment at the end of this post telling me which of the three flavors of the brioche french toast you are most interested in trying out. For additional entry(ies):

106 comments on “IHOP’s Brioche French Toast and a Giveaway”