This past Memorial weekend, I attended the wedding of one of my closest friends, whom I've known since high school. This was no ordinary wedding.  It was a full on Indian wedding. If you've never been to an Indian wedding or heard of one, it's pretty extravagant.  It consists of multiple events, multiple days.  It's full of dancing, performances, a horse, and most importantly: food!

While the wedding events were long, I never felt bored. There was so much to watch and learn. And to really keep me preoccupied, we were fed about every two hours! I amazed to see the amount of people with their fancy cameras. Since a lot of my friends were focused on taking pictures of the wedding and people, I was able to concentrate on the food.  A lot of my friends wondered how I would blog about the food I had since I didn't know half of what I ate. I told them I'd blog about it through pictures and very limited commentary. After all, I've learned that food blogs are really all about the pictures and most of the time people are only half reading my babble anyway.

The first event I attended was called a sangeet. This took place the day before the wedding ceremony. It's hosted by the bride's family, and it's an event where the bride's family welcomes the groom's family. The event was about 4 hours long and we were fed twice! First some appetizers, and later on we had lunch. 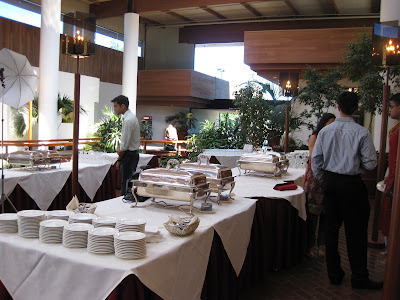 The event took place at the Santa Clara decathlon club. It was quite
pretty. There was a waterfall inside.  And we had a view of flowers and
a tennis court.  A stage was set up for the performances. 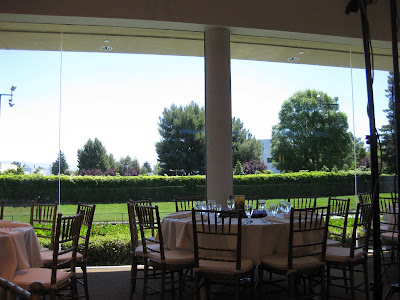 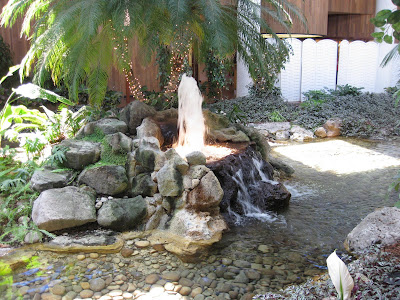 Each table was decorated with these candles. But these candles were no ordinary candles. Each one was handmade! The groom's father made LED candles. As you can see, inside are LED lights and batteries.  The wax was then poured on. And the bride decorated each candle. 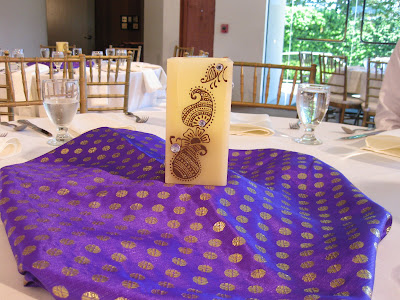 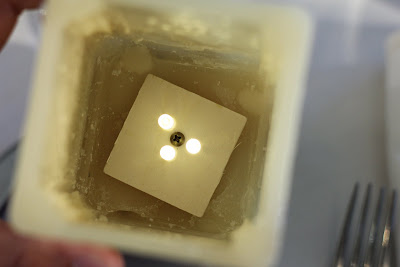 One of the first performances we were treated to was the musical talents of the groom and his mother. We also were entertained with the dancing skills of the bride. 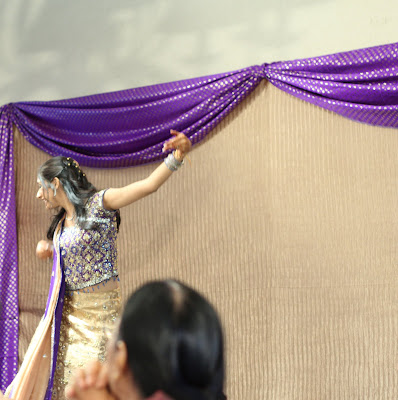 All the cousins from both sides of the family also entertained us with some fancy Indian dancing. 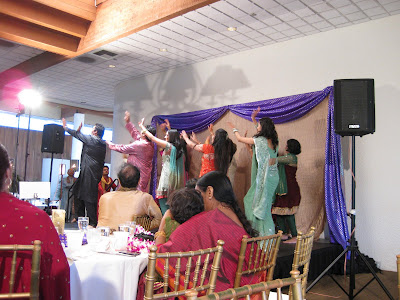 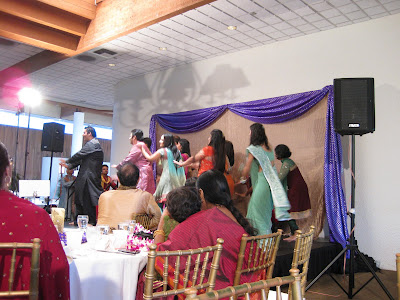 Now onto the food: 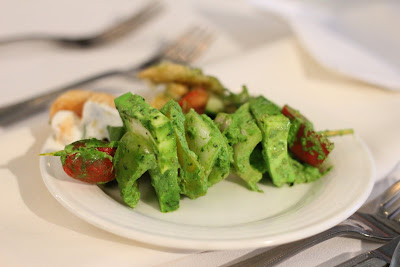 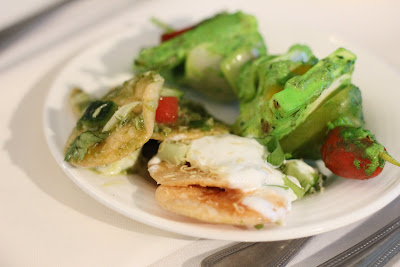 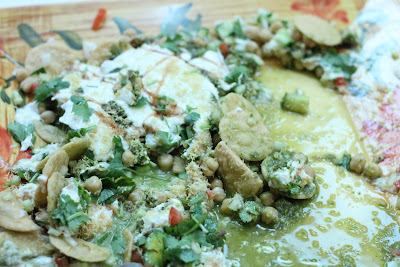 My favorite was thegreen thing. It was mainly cheese cubes, onions and peppers on a stick, in some sort of sauce. There were also these cracker like items soaked in beans and sauce. No labels on the food, so I don't know what I was really eating.

I got a little of everything. I also tried to take pictures of the
food displayed. Everything was buffet style.

These cucumber and cheese sandwiches were simple, but came in handy
for the rest of the food which was spicy! Everything kind of blended
together for me because almost everything was spicy. 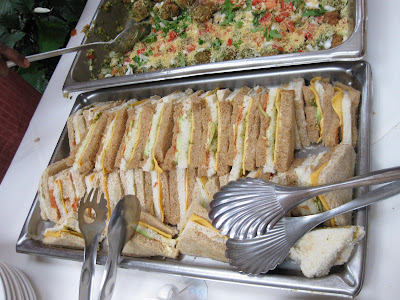 There were fried balls made up of different kinds of bean/peas. 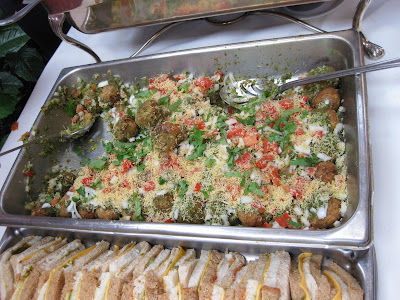 A dish that resembled chicken, but everything here was vegetarian. I
don't know what they were filled with. Perhaps cheese or cauliflower. I
remember tasting mainly batter. 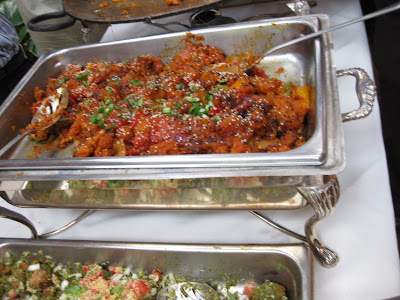 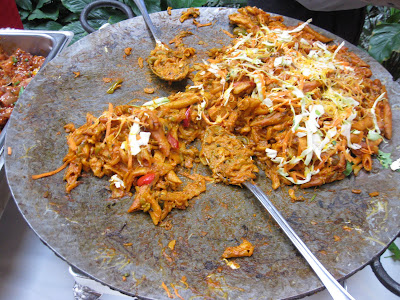 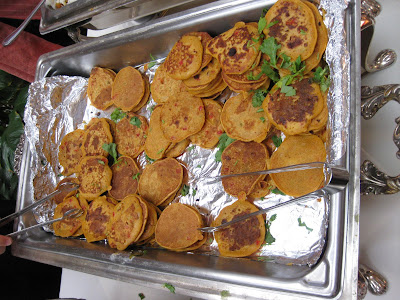 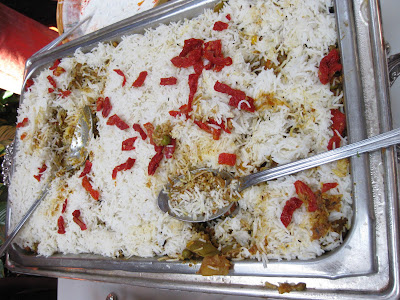 This was one of two desserts. It seemed to be made of some sort of bean
paste. It was liquidy and super sweet. I learned throughout the weekend
that almost all the Indian desserts were extremely sweet. But I ended
up really liking them. I think part of it was that the sweet desserts
were a great counter to the spicy food. 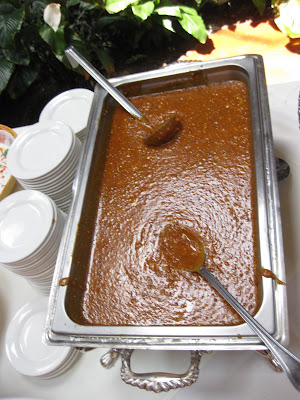 This was a drink of rose flavored something with ice cream. I believe
there were also basil seeds inside. 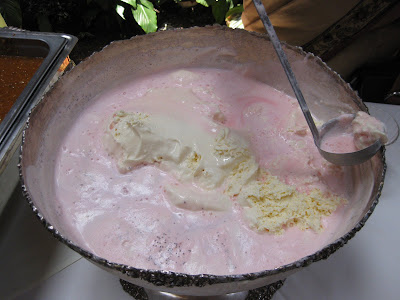 At the end they had "coffee" and tea, and this after meal cleansing palate item wrapped in edible foil. I say "coffee" in quotations because the coffee was very white and tasted like sugared milk with a drop of coffee flavoring. It tasted good but it didn't taste like coffee.  Boyfriend was saying "Finally, a coffee I don't hate!" 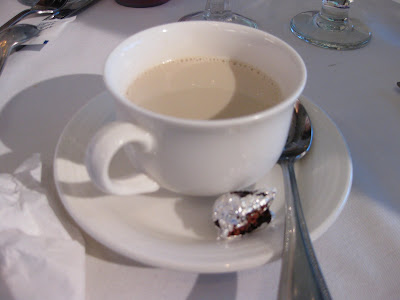 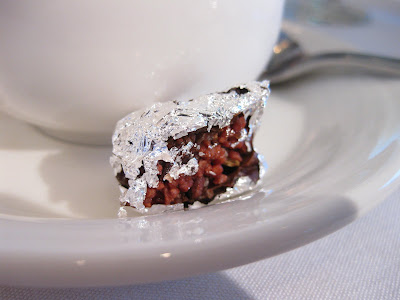 I wasn't a huge fan of the foil thing. First, I had some reservations of eating foil. Also the taste was really strong. One of my friends said it was filled with star anise. She said it was similar to what is usually put in a bowl when you leave an Indian restaurant that people usually eat to cleanse their palate.

During the sangeet, girls could also get henna done on their hands and we were treated with bangles and bindis.

I've been lucky enough to maintain close friendships with my core group of high school friends. The nice thing about these weddings is that it lets us have a sort of high school reunion. With everyone doing there own thing, living in different places, the only time we all are in one place anymore is at one of these weddings.

During this weekend, other than attending the wedding events, checking out desserts in SF, I also got to spend some time with my best friend and his baby.  She's gotten so big since the last time I saw her. She's so active and curious about everything. I loved snapping photos of her. She's becoming quite the expert flyer and wedding guest, as she's been flying around and attended several weddings in her young life. 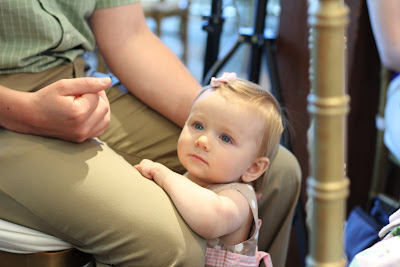 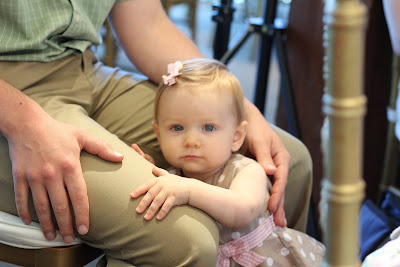 Still to come: the groom entering on a giant horse, Indian breakfast, lunch, ceremony, and the grand reception food!