Indian Wedding Part 1 can be found here.  The festivities continued the next day at the Sofitel Hotel in Redwood City. Prior to choosing a wedding date, the bride and groom consulted with a priest to find out the most auspicious time for them. It was 10:50 a.m. on May 30, 2010. In order for them to get married by 10:50 am, we had to arrive for the ceremony at 8:30 am!. So early…

The first event started at promptly 8:30 outside of the hotel. The ritual involved the groom riding to the hotel entrance on a horse. I was surprised at how fancy the horse looked. So big and white and decked out in royal robes. The groom was dressed equally fancy. 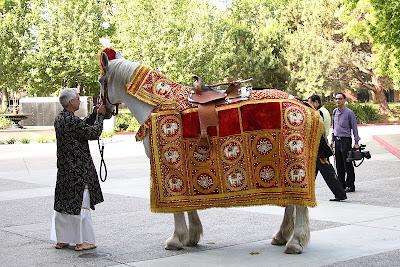 The groom rode on the horse to the entrance of the hotel. The guests of the groom were to follow behind him, dancing the whole way, as a way to express blessings and wishing him a happy future. 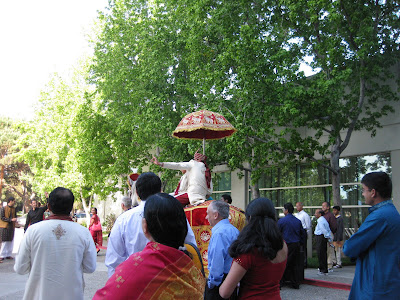 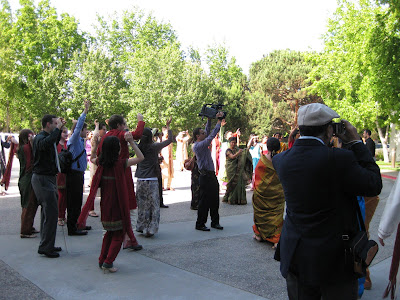 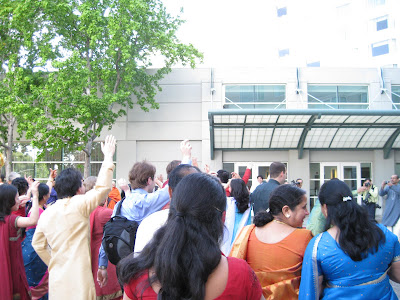 After we arrived at the hotel entrance, there was more dancing performed by both sides of the family. It was quite lively. Halfway through all the dancing, I noticed that a bunch of hotel guests had gathered outside, probably wondering what was going on. To my surprise, they were not shy at all. They pushed their way into the crowd to snap pictures as if they were watching some big performance.

There were then a couple of rituals performed in front of the hotel, many of which I didn't get to see because there were so many people crowded around. After it was over, we went inside, and were given flowers and served breakfast outside in the pool area, where the rest of the ceremony would be taking place.

The breakfast was made up of a lot of oily and some spicy food. A little hard for my stomach to handle so early in the morning. There were these onion ring like items. Fried, crunchy, oily, with taste of curry. No actual onion, they just looked like them. 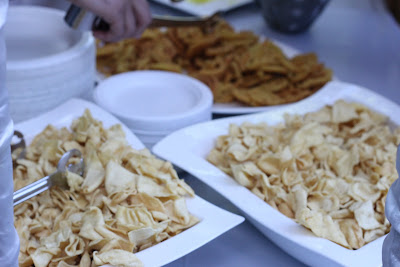 These things reminded me of chips, but they were softer. 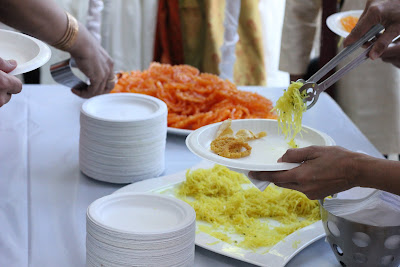 This was like a squash or papaya. It was spicy. 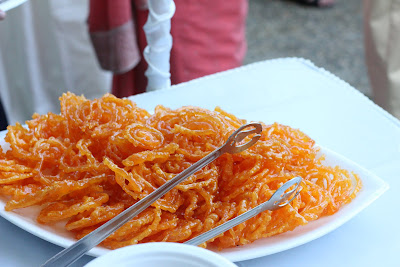 I loved how these things looked. They were covered in an orange glaze. They were sweet, but when you bit into it, there was a burst of oil. So I think it was something fried and then covered in candy coating.

After breakfast, we sat down for the main ceremony, which would last about 2 hours. The hotel overlooked the bay, which was beautiful. 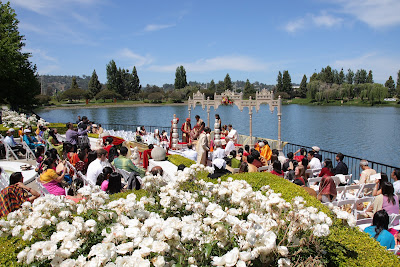 At the beginning of the ceremony, the sun had not completely come out yet. But about an hour in, the sun was everywhere. We had been given these cute wooden fans in the beginning, and everyone used it to shield themselves from the sun.

There were a series of rituals going on, and for the most part, we didn't know what was happening. The priest spoke in sanskrit. Luckily, we were provided a program that described each of the different rituals so we could follow along.

During the ceremony people walked around, got water breaks, chatted away from the sun. It was interesting to watch, but the hot sun did make it hard to sit still.

One of the most interesting things took place near the end of the ceremony. Interestingly, it took place at the same time the bride and groom were united for the first time, making it really hard to watch them. A few days prior to the ceremony, our friend told us casually "By the way, you guys have to protect my shoes from the bride's side." Say what? Apparently, at one point, the groom's shoes are left at the stage. The bride's side then tries to steal them. The groom's side must try to protect them. Well it just so happens that the bride's family is really tall. Really tall. And she has these cousins who could easily be bouncers. My poor guy friends were in charge of protecting the shoes against those guys. Being the loyal friends they are, they fought valiantly, holding onto the shoes for dear life. Chaos began to ensure. There was so much pushing and shoving that the stage started to fall down. Things were falling on the priest! Finally, the groom called them off, and let the bride's side steal the shoes.

We had asked him the day before what happens if the shoes get stolen. He said he had a backup plan to get them, but that it would be expensive. So at the end of the ceremony, the groom needed his shoes back. He had to negotiate with the bride's side to get them. Basically, it was a ritual that allowed the groom to express his love for his wife, how he would love and cherish her forever, etc. But those promises still weren't enough for the bride's side! They not only wanted to hear all that, but they wanted money. So much was going on that I didn't hear what happened in the end. Afterward, I asked one of my friends. He said that the groom had to pay $901 US dollars. Ouch!

After that, we sent the bride and groom on their way. The horse was now attached to a carriage. We watched as they rode off in the carriage. 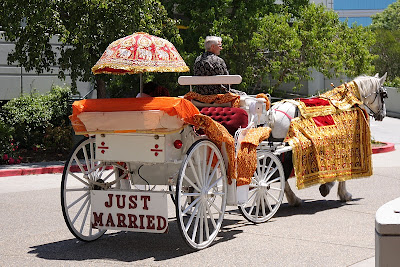 And then it was time for lunch! How nice of them to feed us again before we went on our way. 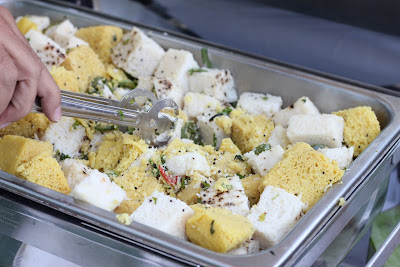 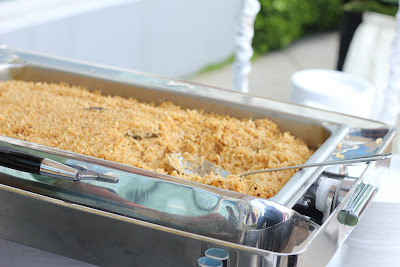 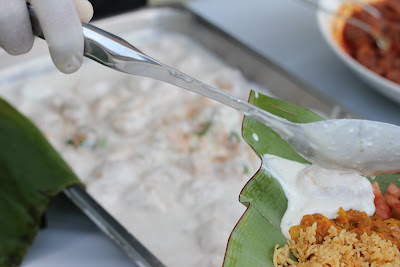 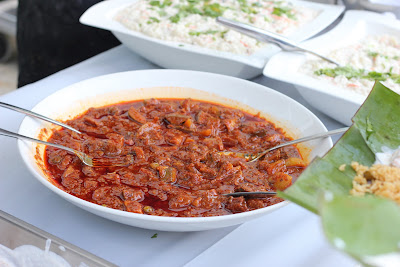 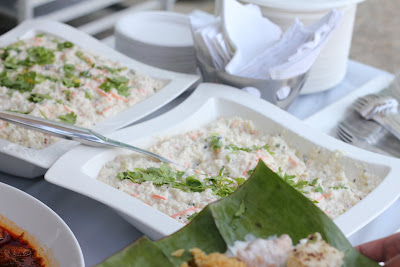 The food was scooped onto a banana leaf. There was a bean dish, a bread type dish, a rice dish, some yogurt, and a really spicy dish.

And dessert, with labels! 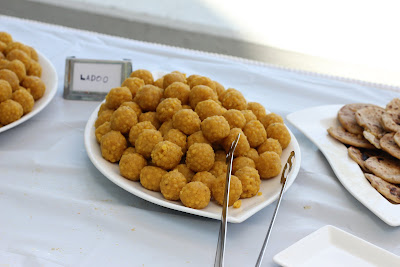 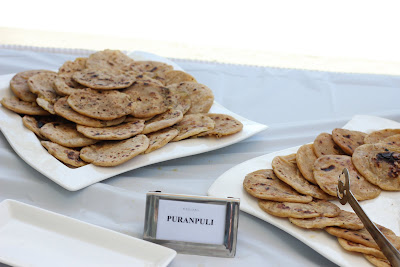 Again, the desserts were super sweet, but I really learned to appreciate them after the spicy food. Especially since I accidentally ate a pepper. I was just putting food in my mouth and didn't see it. It was a large pepper and it didn't hit me until I had completely chewed it up. After that I couldn't taste much, but these desserts helped some.

After this, we had about a five hour break before we would return for social hour and the grand reception. While most people were tired and went home to rest, I took this time to drive up to SF and do a dessert run. Still not quite sure how I managed to eat the lunch food, then hit three dessert spots and return for social hour and reception food. How I love desserts.

I'll end this post here and do one more to cover the reception food, which was by far my favorite. Also everything was labeled!