As I plan my next trip home to the Bay Area to see my parents and attend my friend's wedding, it has occurred to me that I have lots of food posts still from my last trip that I never got around to posting. Time to do some catchup!

I'm always amazed about how the service of a place can completely change the food experience as well. I previously visited King Crab with my parents back in April of last year, where we had a pretty good experience, which you can read about here. I was particularly impressed with our waitress who was a great server and fast talker and managed to convince my parents do order all this stuff they weren't planning on ordering. The way she was acting, we all thought she was a manager rather than the waitress.

When I went home around Christmas time my mom told me that they hadn't gone back in months because the last time they went, she got in an argument with the owner who wouldn't honor a certain promotion.  During the last few days I was home, my mom kept asking where we wanted to go eat, and she kept bringing up King Crab as an option. I said to my mom "I thought you were mad at them?" And she replied "I am. That's why we haven't been back since." But it was obvious her anger had thawed and she was ready to go back.

So we went back to King Crab, originally to check out the dim sum. All dim sum dishes, except the specialty ones, were priced at $2. When we arrived, we were immediately greeted by the server I remembered from my first visit. She immediately bounded over to us and gave my parents a very warm greeting, as if we were VIP customers. I was surprised she even remembered my parents as they've only been there a few times.  There's chinese restaurants where we have gone for every big family event for the last few years, and the wait staff barely acknowledges that we're frequent customers.

My parents expressed their surprise that she remembered them. She responded promptly with "Of course I remember you. You haven't been back since you got mad at my manager." Lol. Wow, her memory was as impressive as ever.

As we sat down to order, we informed her we were really only here for the $2 dim sum special. AWe also wanted to take advantage of the lobster special. Each table can order a lobster with "lo mian" noodles for $10. A whole lobster plus noodles, what a bargain!

However, soon the waitress convinced my parents to order this set menu because it was a good price and had a bunch of dishes we liked, as well as we could get a second lobster with noodles. I am not fond of the noodles that are used in the $10 lobster dish.  Their lo mian noodles are different from other restaurants. But to change to "yi mian" noodles, it costs an extra five bucks. She said if we ordered the set menu, she wouldn't charge us the change in noodle fee.

So we ended up ordering the set menu.

We started with some herbal soup 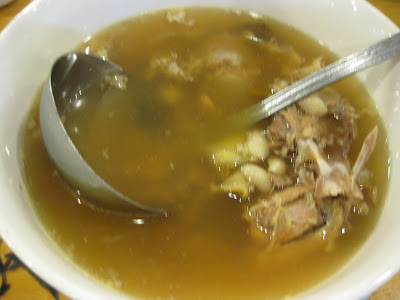 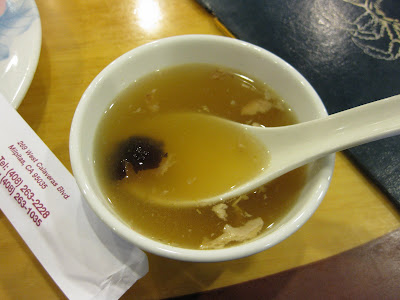 We got a yellow feather chicken dish my mom really likes. 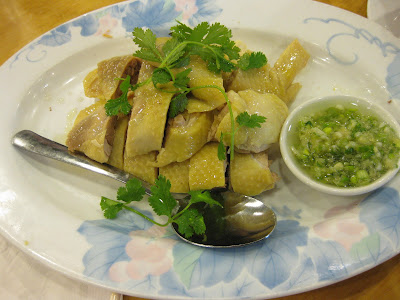 We also had fish fillet with vegetables. 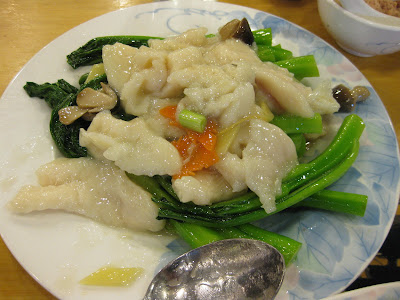 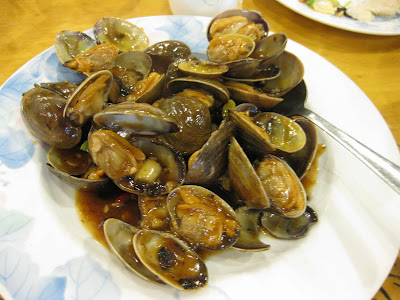 Lobster with "lo mian" noodles. As you can see, the noodles here are different from other "lo mian" noodles, which usually are thicker.  These are really flat and dry and so they don't absorb the lobster sauce. The dish was still good though and the lobster we got was pretty big. 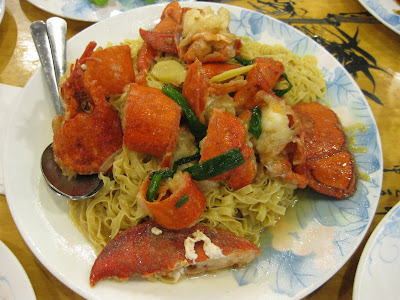 This is the lobster with the "yi mian" noodles. I liked this better, but not sure if it's worth $5 to change the noodles.  Luckily the waitress agreed to not charge us for the change. 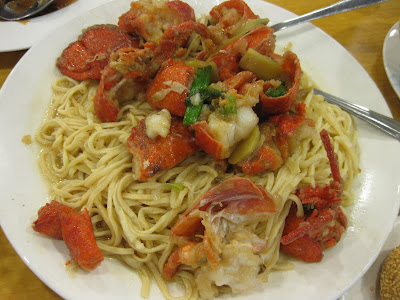 We also got a fried quail. 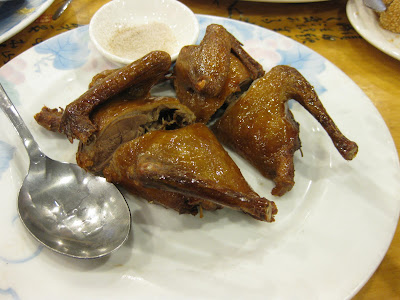 For the dim sum items, we didn't have much room, so we only got a few. We got fried sesame balls. The outside is fried. the inside skin is very chewy, like mochi. and there is red bean paste filling. 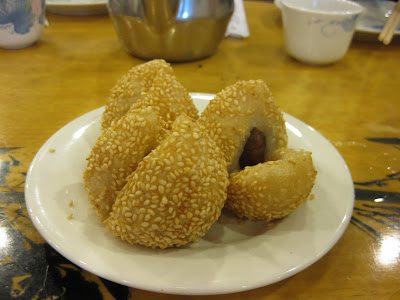 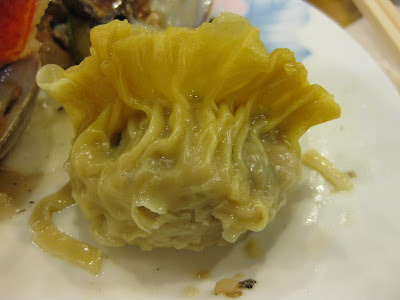 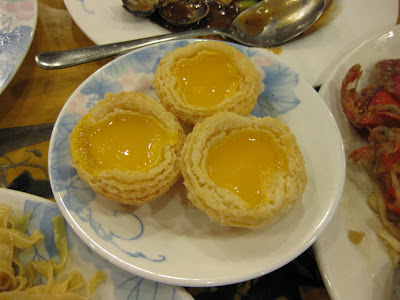 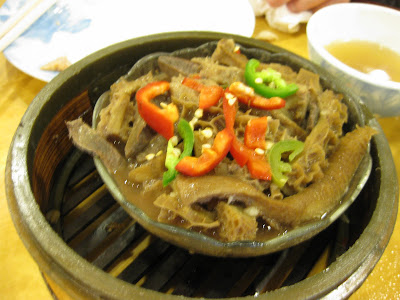 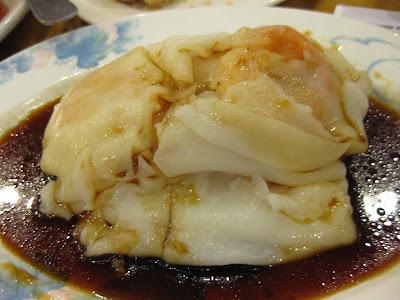 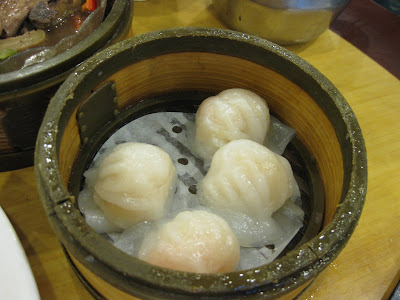 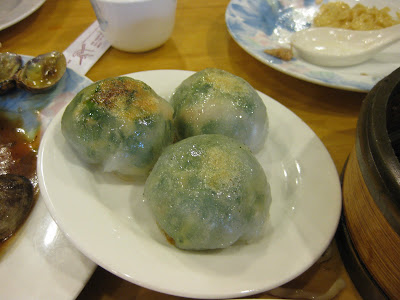 Everything tasted good and the service was good. We left that lunch very happy and satisfied with our meal.

So on my last trip home in March, we decided to go back. When we arrived, we were told that the waitress we liked was on vacation. Uh oh. The lady who served us seemed nice enough, but she obviously didn't have the business sense our previous waitress had.

We chose the same set menu, but they were out of one of the fried quail dishes. So my mom asked what we could exchange it for. The waitress rattled off a bunch of dishes which were all a lot cheaper than the quail. My mom asked to change for some other dishes, and each time the waitress said she would have to check, or said they couldn't do it. My mom even offered to pay the difference in price, but they still refused.

The meal started off with some herbal soup. 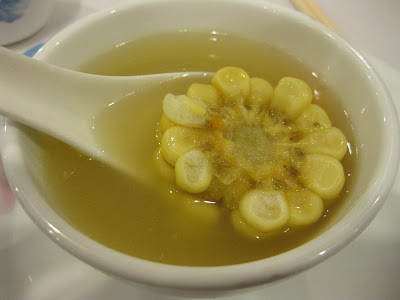 We also got clams. 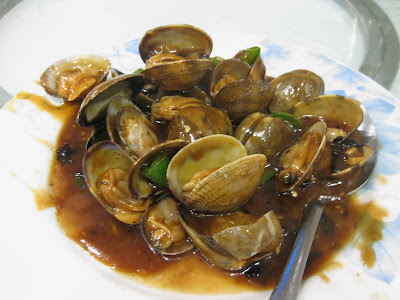 Fish with vegetables. This dish was overly salty. 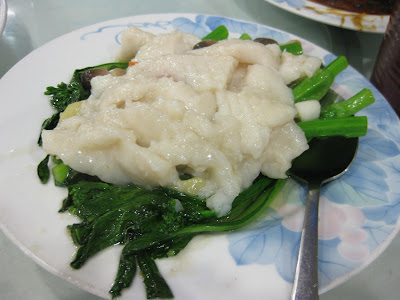 The waitress also suggested we order the half goose. My family loves goose meat and we haven't had it in a long time, now that the local chinese grocery stores around us no longer carry it. The goose in the picture of the special looked big and juicy.  The one that arrived was not. It was tiny. Like a quarter size. And it didn't taste like goose…it tasted like duck. For $18.99 this seemed like a big rip-off. 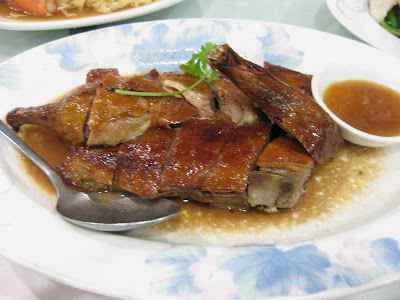 Lobster lo mian. This is the one that is on special for $10. 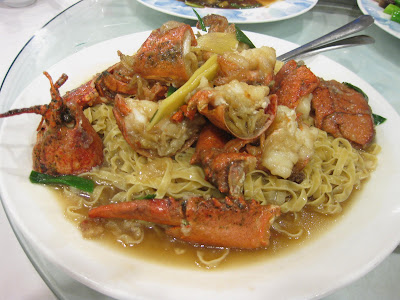 The lobster was fairly meaty for this dish.

Our set menu also came with the lobster noodles, and we switched it for the "yi mian" because I prefer these noodles. The waitress wouldn't waive the $5 fee. 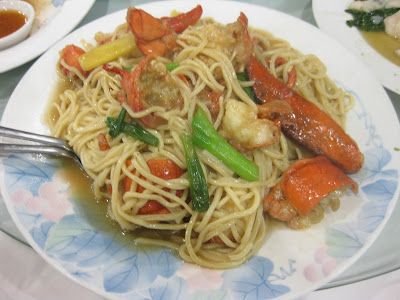 This dish didn't have nearly as big of a lobster. Also the noodles were still undercooked.

We also got a yellow feather chicken dish. 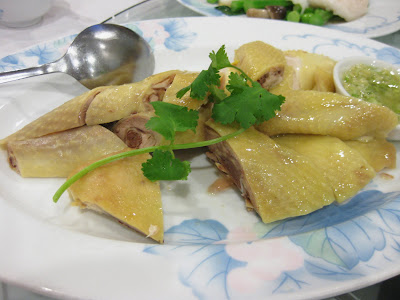 Salt and pepper scallops.  Some of the scallops were undercooked..And I just didn't like the taste of this dish. Too salty. Scallops mushy. 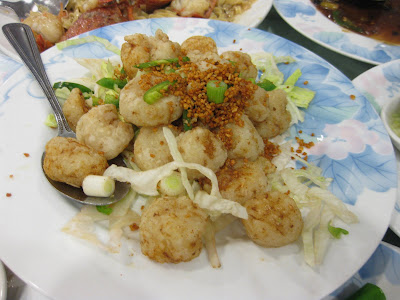 Nothing seemed to taste right that day. All in all, not a great dining experience. My parents have vowed to phone first and check to make sure the waitress they like is there next time. I'm still amazed that even the quality of food seemed to change with the waitress being missing.

For dessert, we got complimentary red bean and tapioca soup. 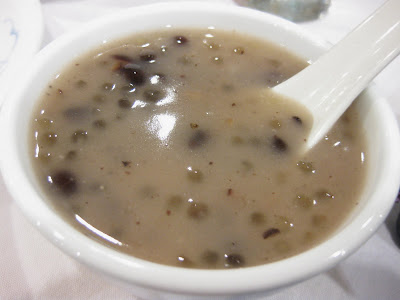