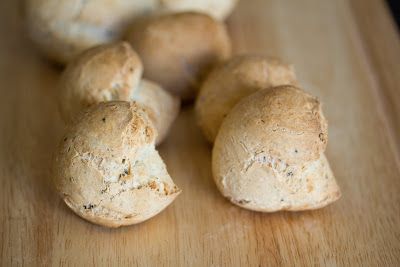 Earlier this year, I discovered a Korean sesame tapioca bread that I totally fell in love with. The first one I tried was at Paris Baguette. They seemed super popular, so I grabbed one to try.  The bread is light and airy and very, very chewy. It’s like a cross between the chewy crusty French breads and a mochi.  The bread is not really sweet.  The toasted sesame seeds add a great flavor and keep the bread from getting boring. Normally I’m not a fan of black sesame, but the addition of the black sesame seeds is perfect for the bread

Since I love almost all things chewy, I really liked this bread. The use of tapioca flour is what makes it so chewy, similar to the tapioca balls served in the milk tea drinks. Since then, I’ve been on the hunt for this tapioca bread. I’ve found at various bakeries.

In the Bay Area, I’ve also found the bread at the Sogo bakery (10889 S. Blaney Avenue
Cupertino, CA 95014).  Theirs is one of my favorites because it’s really big and only costs $1. I’ve also seen it at the Mitsuwa bakery in Costa Mesa, though they are called “mochi bread” even though there isn’t any mochi flour in the bread that I know of. I’ve seen it at the Tous Les Jours bakery located inside H Mart in Irvine. I saw it once at the Zion Market bakery in San Diego, but on subsequent visits, I wasn’t able to find it.

Since it’s been so hard for me to find these breads, I thought about trying to make my own. I searched the internet for recipes. But I couldn’t find any. All I found was one poor girl’s attempt to find the recipe also. She posted on quite a few forums trying to find a recipe.  The only answer was that some Korean markets sell a mix you can use to make them.

So then, I began searching for the mix. I checked every Korean market I passed, but couldn’t find it for the longest time. Finally, on my last trip home, my mom and I were out shopping and picking my favorite chewy noodles when I suddenly saw the mix on display. I was so ecstatic and I immediately bought a box.  Since then, I’ve now seen the mix sold at Zion Market in San Diego. 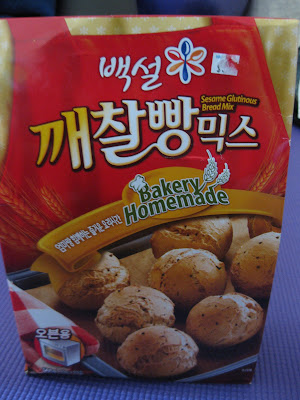 I was so excited about finding the mix, that I didn’t even realize that the direction was in Korean until much later. After I realized my dilemma, I immediately tried to think of what friends I had who could translate the instructions for me. I realized there was no one around me who could. And then I thought of the foodie community. And immediately through of one of my favorite bloggers, Rosa from Dining with the Catty Critic. 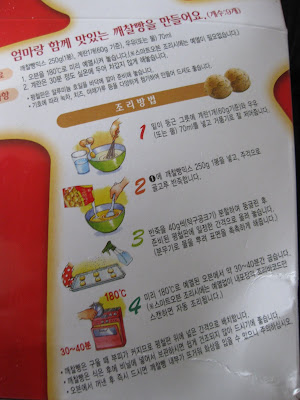 After some twitter exchanges, she told me that she couldn’t translate, but that her mom could. So I snapped a picture, sent it over, and a few days later, I got my translation thanks to Rosa and her mom.  Thank you, Rosa and Rosa’s Mom!

I made the balls this weekend. I was a little bit worried at how dry the dough was even after I added the egg and milk. But it was wet enough to form dough balls. It was quite easy to make. Each box contains two packages of mix. I took one package, poured it out, added an egg and the milk and then worked the dough with my hands until it came together. 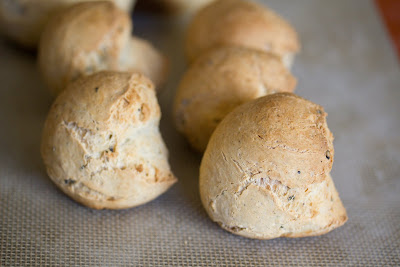 Then I put ping pong ball size dough balls onto a baking sheet and put some water to keep them moist. Thirty minutes later, they were done! I think I might have overbaked them a bit because they seemed slightly too hard on the outside. Or perhaps my dough balls should have been bigger. 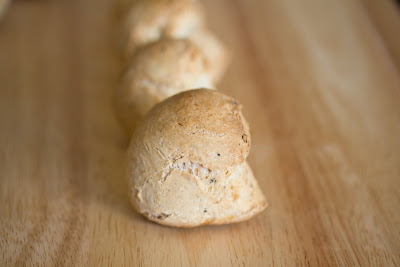 The ones I’ve bought in the bakery always have cracks and aren’t completely circular. Mine had cracks, but all look like little pacmen. I’m not sure why they turned out this way. They were circular balls when I put them in to bake. I’m playing around with my next mix to see if I can create a less pacman-like look. But I’m super excited I can now make these whenever I feel like eating one. 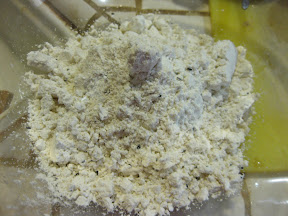 1. Put 1 egg (60g), Milk or Water 70ml, in mixing bowl and mix well with the Mixer.
2  Put 1 pack of Kechal bread mix (250g) in the bowl, and knead well.
3. Place a ping pong ball sized bit of dough on baking pan with some distance.
(Spray with water on the face with sprayer for moisture).
4. In preheated oven, 180’c, bake about for 30-40 minutes. (I think next time I will reduce the baking time since mine seemed a bit hard at 30 minutes)
.When the Kechal bread bakes, they grow big so need distance from each other.
.It is better to store them in a vinyl bag after cooling.
.Be careful when eating right away out of oven; it is very hot inside of it.

Prep Time: 10 minutes
Cook Time: 30 minutes
Total Time: 40 minutes
Course: Snacks
Cuisine: Korean
Korean sesame tapioca bread (a chewy bread that is not sweet) is one of my favorite Korean bakery treats, but I can't always find it at my favorite bakeries, so I decided to make my own. Unfortunately, I have yet to find a from-scratch recipe, so after searching for a long time, I finally found a store-bought mix. Depending on where you live you might be able to find this mix at your local Korean market (I buy mine at Zion Market in San Diego). The first time I bought the mix I was so excited until I realized all of the instructions were in Korean! Luckily a fellow blogger, whose mom speaks Korean, was able to help me out with the translation. You can read the original translation in the post above this recipe. For this printable card, I've updated it to read like a regular recipe.
Print Pin Rate

Did you make this recipe?I'd love to see it! Mention @KirbieCravings and tag #kirbiecravings!
Posted in: Bread
27 Comments // Leave a Comment »