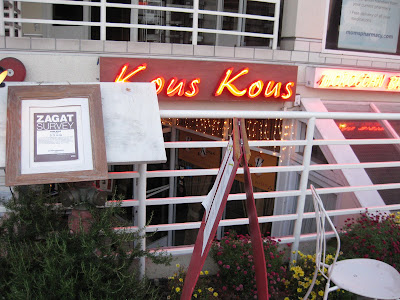 This weekend, my friend Steve invited BF and me to try out Kous Kous with him. He had gotten a groupon certificate for the restaurant and saw that it got really good reviews from yelp. I'm always excited to try out new places and Moroccan food sounded like a lot of fun.

Prior to this occasion, I've only had Moroccan food once. It was near Disney World during high school. I remember there being belly dancing and huge platters of cous cous.

The restaurant is located downstairs on 4th Ave, making it a little hard to spot. The interior is very dark, which I wish I had known about beforehand, because I did not come prepared with a camera that could handle the dark ambiance. As a result, the pictures I took are pretty grainy. Grainy enough that they kind of make me cringe and make me want to go back just so I can rephotograph the food.

The menu consists of two main types of dishes: tagine, which are slow cooked stews and served with cous cous; and brochettes, which are grilled skewers.  In addition to the regular menu, they offer a family style tasting for $30/person. You get to sample all the tapas on the menu, as well choose two entrees to share, and a dessert of strawberries and oranges with a orange honey blossom glaze.

Since the family tasting allowed us to sample the most food, we opted to try that out. For our entrees, we chose the lamb shank tagine, which was highly recommend on yelp and by our waiter. For our second entree, we had originally wanted the beef brochette (Char grilled filet mignon skewers with ginger, garlic and fresh herbs marinade), but they were out of it that night. Instead we chose the seafood tagine special of the night.

We were first presented with a complimentary plate of olives and carrots. Normally I hate olives, but I didn't mind these. The way they were cooked and seasoned, the olive taste was much more mild. I also liked the cooked carrots. 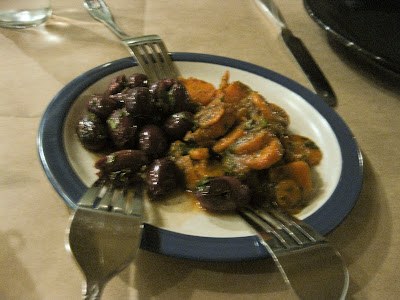 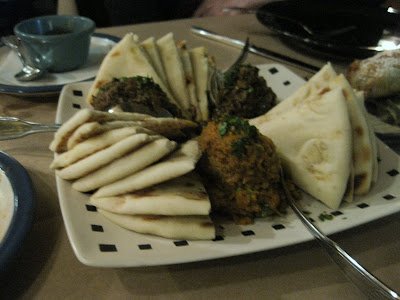 With all the pita bread, this was a pretty filling starter. I think we all liked the zaalouk the best, though all three were enjoyable.

Then we were given a B’stila roll (Baked Stuffed Phylo)- Herb saffron chicken, orange blossom water, honey, cinnamon, almonds.  This was interesting to me. The outside was dusted with powder sugar, but the inside was a savory taste. The crust was very delicate. I didn't really love this though. 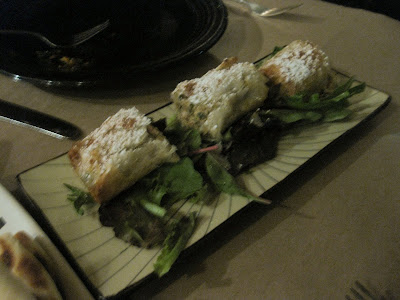 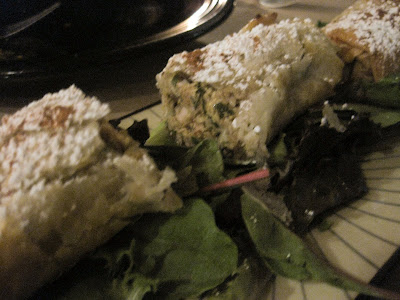 Our main entrees were served with a large platter of cous cous as well as fresh baked bread. I really loved the cous cous. I've had cous cous a few times and have been pretty indifferent to it. But this one I really enjoyed. There were lots of flavors inside that made this really tasty. It is garnished with raisins, which I thought I wouldn't enjoy (I don't usually like curries and other foods garnished with raisins), but I didn't mind them in this cous cous. 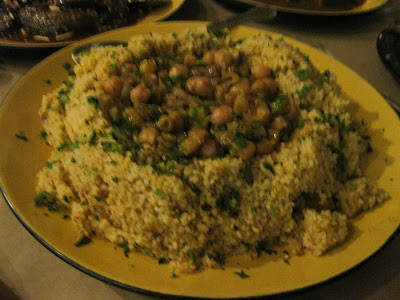 The lamb shank tagine was a must order according to our waiter. I had been interested since I love lamb, but I was hesitant because it seemed like a sweet dish as it is served with a honey sauce. When I tasted it though, I was pleasantly surprised. The dish is subtly sweet, but I didn't mind at all. The lamb shank was so wonderfully tender. The flavors of the honey and whatever else they used matched the lamb perfectly. I can see now why this dish is so popular. This is definitely going to be my dish to order next time I come here. 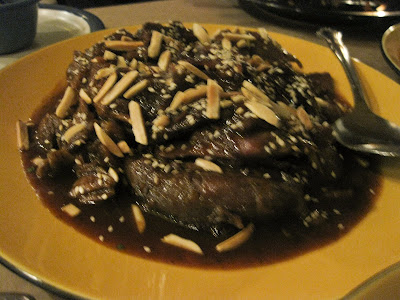 The seafood tagine was served in a tomato broth and consisted of large chunks of fish and shrimp. The dish was pretty good, but not nearly as good as the lamb. Most likely, I would not order this again, and would opt to try something else next time. 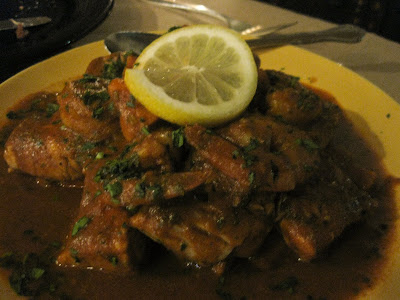 We were so full from our appetizers that we barely had room for our entrees. We ended up having quite a bit of leftovers

Dessert was a bowl of strawberries and oranges with a orange blossom glaze. I think there was also honey in the glaze and some cinnamon. The fruit was very sweet with the glaze and was quickly gobbled up. 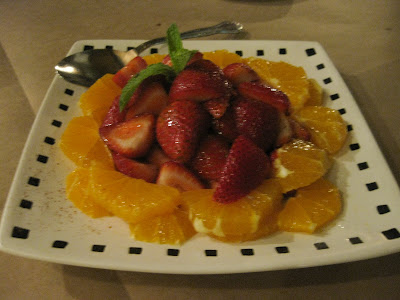 All in all, it was a good experience. I will definitely visit this place again. Next time, I probably won't do the full tasting because it was simply too much food. I'd rather just go straight to the main entree.