I previously went on LA food trips on two occasions around the San Gabriel Valley, Monterey Park, Alhambra, Rowland Heights areas which I started to blog about, but never finished.

So I’m going to wrap up the rest of those food adventures here. First, Kang Kang Food Court. 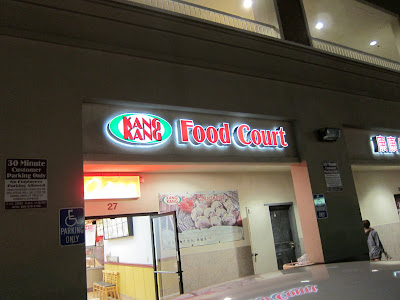 After reading about Kang Kang food court from Wandering Chopsticks, I was really excited to try it out. A huge amount of shaved ice and three toppings for about $3. Famous Sheng Jian Bao (Shanghai pan fried dumpling). I was definitely in!

Like the name implies, it’s a fast food court setting. You can order fresh made food, or there is also precooked food laid out and you can choose a combination of those. Everything is pretty cheap.  Kang Kang Food court was the last stop in our food trip on this date, so we were pretty full.  Only shaved ice and the famous sheng jian bao for us.

We got our shaved ice first. I was surprised by the huge amounts of ice and toppings. And I loved that they had glutinous rice balls (chewy balls that are sometimes referred to as mochi) as one of the topping options.  I thought I had taken a picture of the toppings, but I can’t seem to find the pictures. If there was shaved ice this cheap in SD, I’d be eating it everyday. 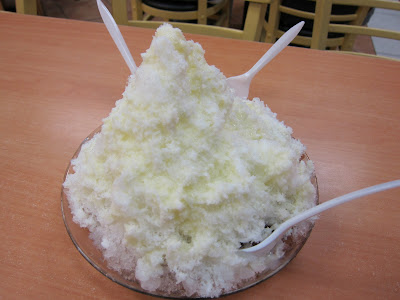 Our Sheng Jian Bao took a while to arrive. When they did, they were piping hot. They brought them to our table, along with plates and dipping sauce. The Shen Jian Bao looked so delicious. I could just tell the skin would be nice and crispy. 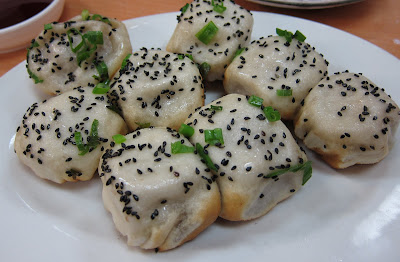 When you bit into these, the juice squirted out. These remind me of Xiao Long Bao, (pork soup dumplings) because they have a lot of soup in them. Except the skin is much thicker and it’s pan fried. My first experience with Shen Jian Bao was at Dean Sin World. I found that the dough was too bready. It was more like a bao (steamed bun), that was pan fried at the bottom.  The dough for these were thick, but they were chewy and doughy, which I liked better. So it was much more like a dumpling dough rather than a steamed bun dough. I loved how much soup was in these dumplings. The only bad thing is that the juice squirted up, and it was really hot.

I did think the juice was a bit too salty, as was the meat. If they cut down on the saltiness I would like these even more. But they were still pretty enjoyable.

I could have sworn I took pictures of this place and the sign bragging about their Sheng Jian Bao, but they seemed to have disappeared…Anyway, here is the menu:

A few weeks later, I was craving those shen jian bao again. But we were not planning on going to Alhambra on this road trip. Then I discovered that there is another Kang Kang location in Monterey Park. Perfect! 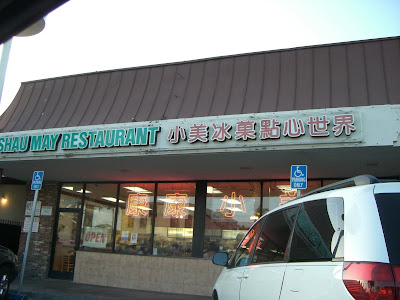 It was a bit hard to find . . .  because the sign says Shau May Restaurant! I guess Kang Kang bought it or they merged or something. Inside, the menu was Kang Kang. It’s interesting because I had been reading posts that Shau May had good SJB, some people thought them better than Kang Kang, but apparently they are now the same place. This location is smaller than the Alhambra one, but offers the same food. 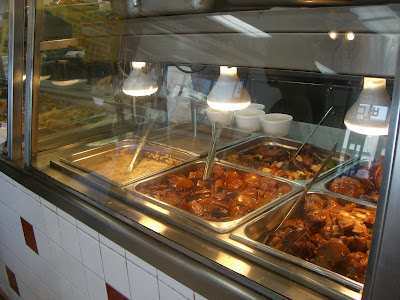 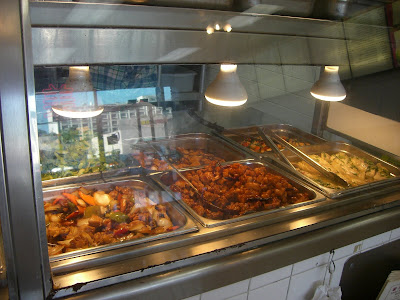 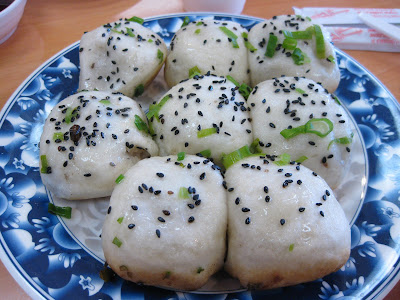 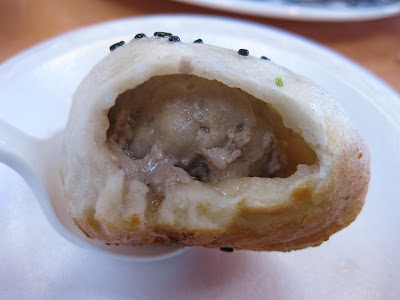 I also ordered the meat pancake pie which I had forgotten to order last time. Layers of savory chinese pancake dough and ground meat. Boyfriend loved this. 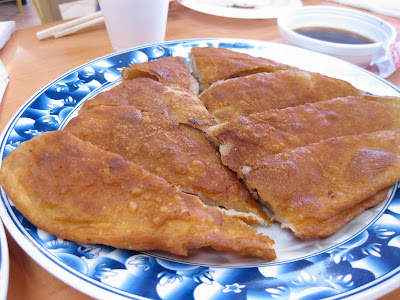 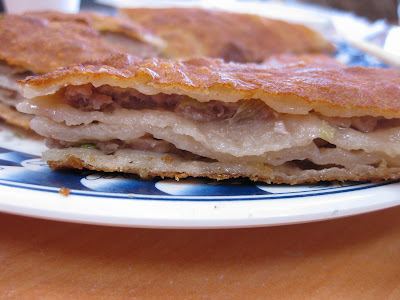 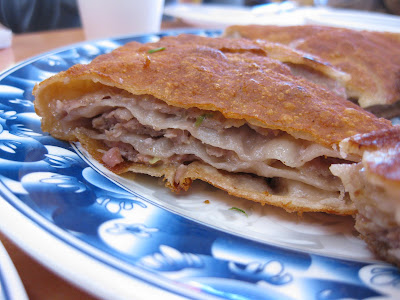 I was really tempted to get the shaved ice again. It’s so cheap! But we were heading over to Rowland Heights for some snowflake shaved ice..so I somehow managed to control myself.

One of my favorite Taiwanese street foods is the thin rice noodle soup. It’s traditionally made with oysters, but there is also one made with intenstines. I like both of them. I’ve had a hard time finding a decent bowl of this stuff in the US. Most of it is severely disappointing. Ay Chung is apparently a famous chain in Taiwan that specializes in the rice flour soup. I first heard about a location in SGV from Eileen Likes to Eat. So I decided to check it out.

I sometimes read about restaurants having a sticky feel. This restaurant really had a “sticky” feel. It was set up like a food court. But the benches and tables all felt so sticky that I really didn’t want to eat there. 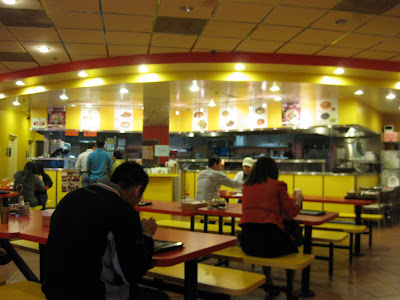 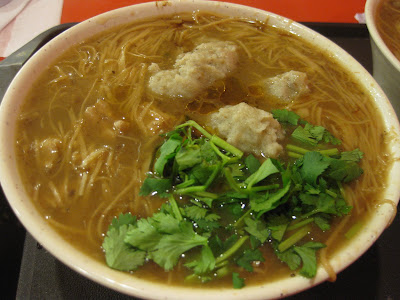 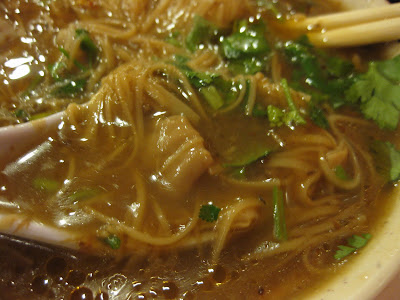 I thought the noodle soup was alright. It was better than most of the ones I’ve had, but still quite a bit below the ones I’ve had in Taiwan. The thin noodles are put in a thick, starchy broth. It’s usually a bit spicy.

I was pretty disappointed with the stinky tofu. It wasn’t fermented enough so there wasn’t enough flavor in the tofu. 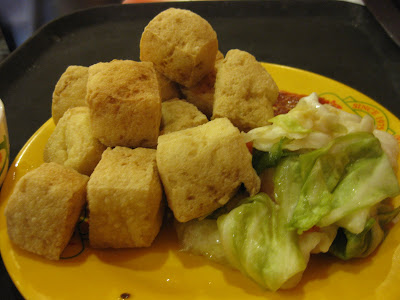 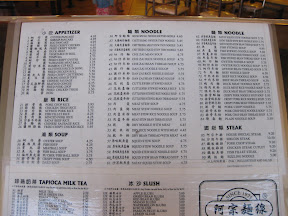 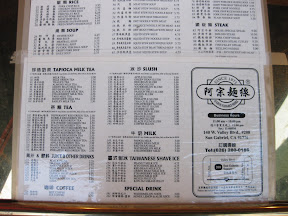 We also visited some bakeries on our last trip, but I’ll have to write about them some other time.