Ladurée, along with Pierre Hermé, are the two most famous bakeries for macarons in France. 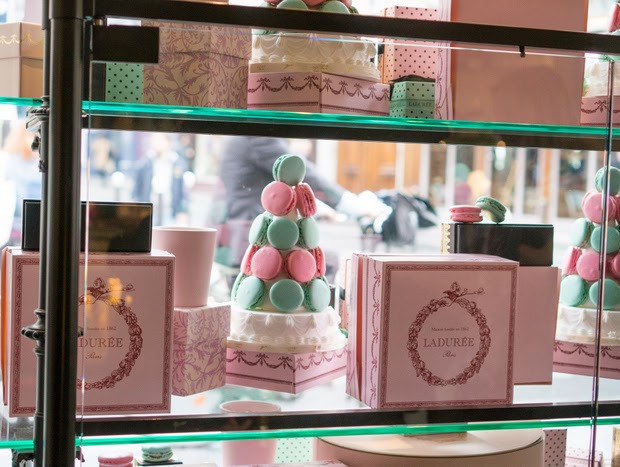 There is much debate as to who makes the superior macaron. I am firmly in the Pierre Herme camp, but I still wanted to give Ladurée another chance on my most recent trip. I also had a few friends who had never experienced Ladurée so I wanted to bring some back for them. 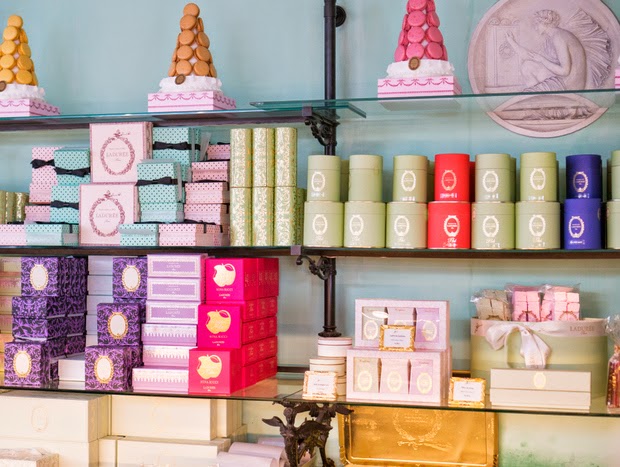 After our stay in London, Mr. K and I took the Eurostar to spend one day and night in Paris. The trip wasn’t nearly long enough, but it gave us a chance to revisit all of our favorite spots from our vacation two years ago. 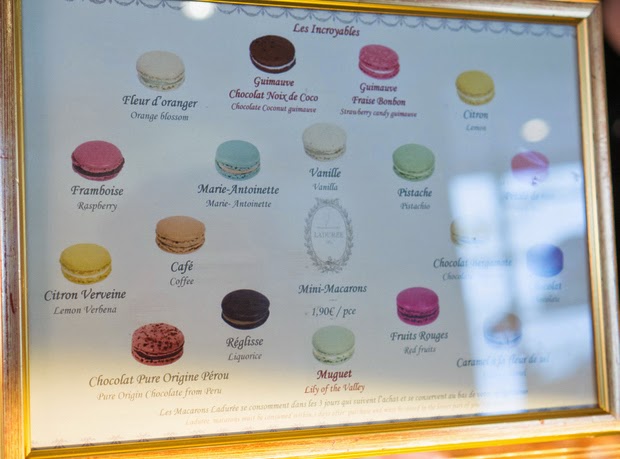 There are quite a few Laduree locations in Paris, many of them are full service restaurants where people come in for tea and meals. The bakery side offers rows and rows of macarons, towers of macarons, and many other delectable cakes and pastries. We debated whether to dine in, but nothing really struck our attention from the menu, so we ended up just picking up some macarons and pastries to-go. 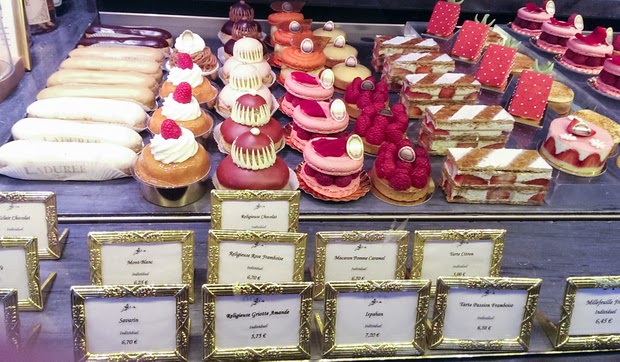 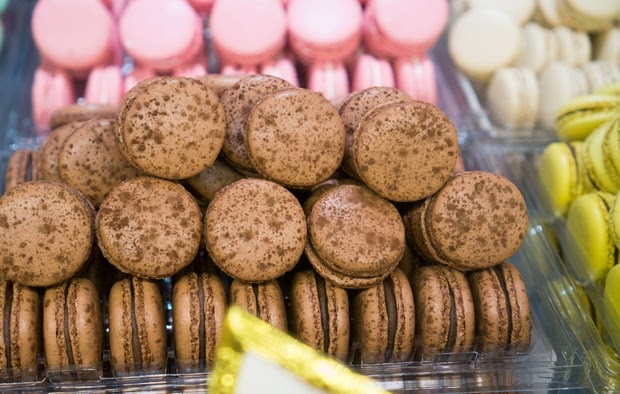 The macarons are priced at 1.90€ (about $2.59) plus the additional cost for the boxes. During my visit two years ago, I felt the macarons were good, but not as memorable as the Pierre Herme and not superior enough to warrant the high price. After this visit, I left with the same impression. In fact, I was actually a little more disappointed with this visit. 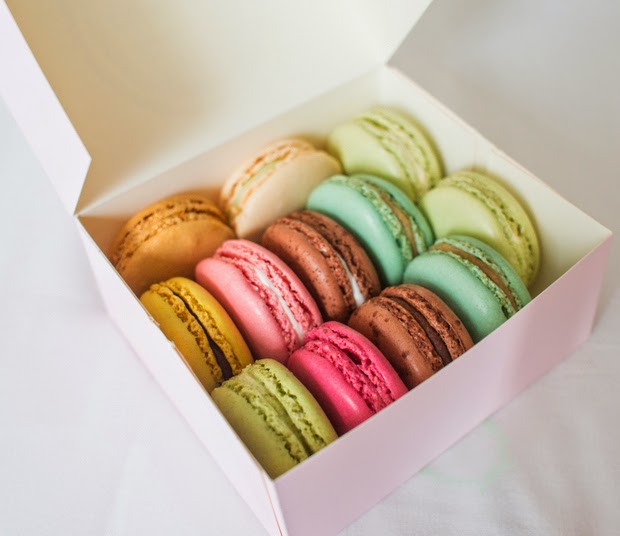 Some of the macarons had shells that were crumbly and brittle, evidence that the macarons were no longer fresh or hadn’t been properly stored. (None of the macarons are made in-store. Instead they are made at a central facility and then frozen and shipped to different storefronts.) As a result, they also broke easily and many of them looked worse for wear by the time I finished carrying them back to San Diego. 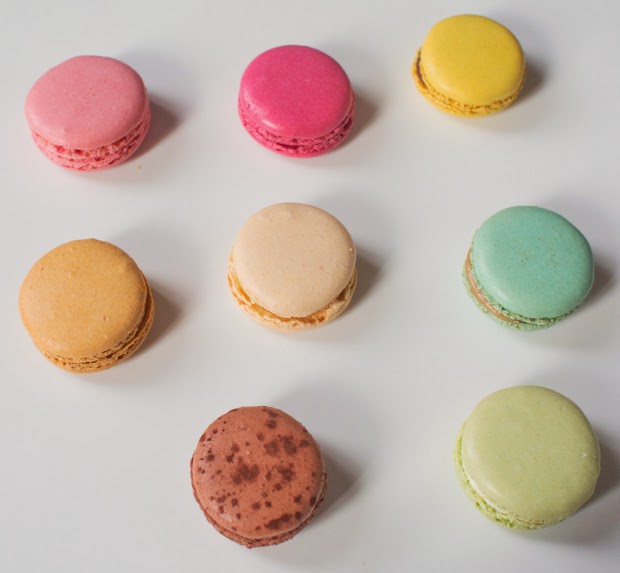 The ones that were not brittle did have a good chewy texture, but I still didn’t feel like they tasted very special.

While there, we also picked up some croissants and other pastries. 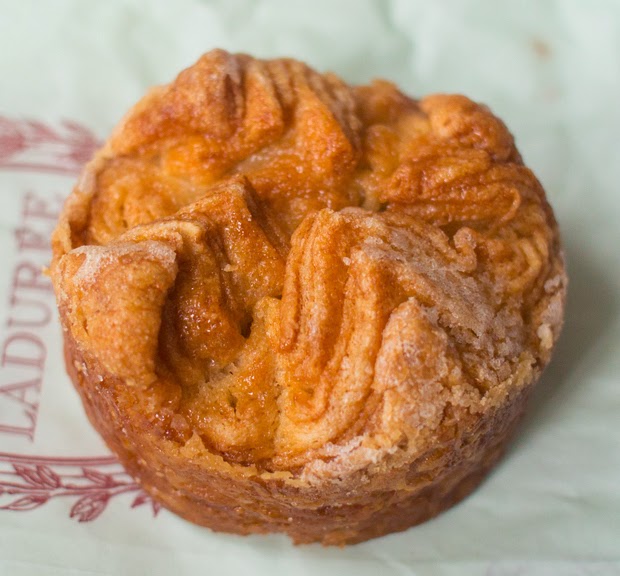 My love affair with Kouign Amann is well documented here and here. It’s a Breton cake made with bread dough layered with butter and sugar. It tastes similar to a croissantbecause it has many light and airy layers. The exterior has a crunchy layer of caramelized sugar. I had wanted to try the one at Pierre Herme but they were sold out. The fact that Laduree still had ones remaining late in the afternoon was not a good sign, but I went ahead and bought one anyway. 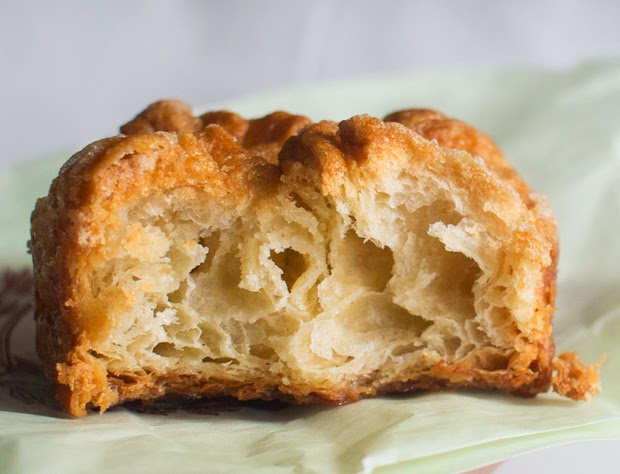 This was quite disappointing. Dry, dense, and lacking the airy flaky lightness that makes Kougin Amann so delightful to eat.

We also got a giant croissant and a chocolate croissant 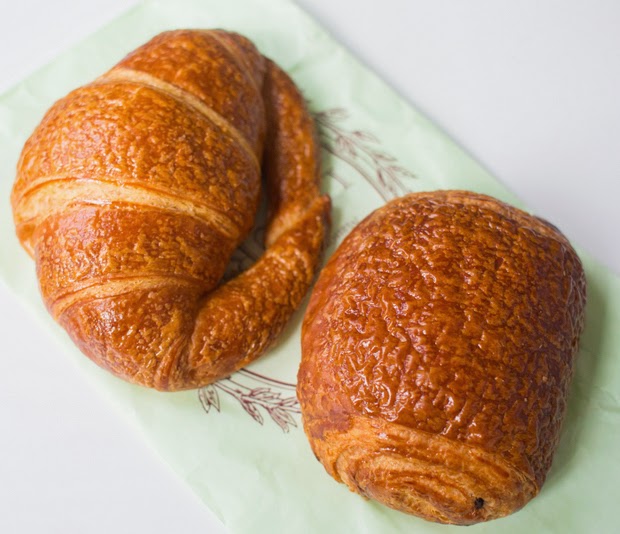 Both were pretty good though a tad expensive.

I know many people are big fans of Laduree so I don’t want to offend. The shops are a beautiful place to visit as they offer so many sweets, souvenirs and more. I just haven’t been very impressed with what I’ve tasted.

You can view all my Paris posts here.