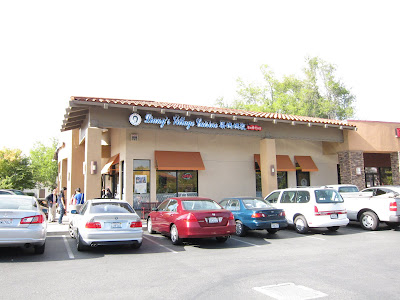 I had never heard of Mama Liang’s until recently.  While talking to my parents on the phone, they informed me that a Mama Liang’s had opened in their area. They said the chain originated in LA and had several locations there.  I had never even heard of Mama Liang’s, and I was surprised I hadn’t, with all road trips to LA for chinese food and constant research of chinese restaurants in the LA area.

I then proceeded to look up Mama Liang’s and saw rave reviews on yelp.  On my last trip home, with both my parents working, BF and I went out for lunch and we decided to try Mama Liang’s.

One of the things I have enjoyed most about writing this food blog is learning so much about the history, culture and stories behind the different foods I eat.  I’ve particularly enjoyed learning a lot more about my own culture and the food I have grown up eating, but really knew nothing about.

My posts and food experiences have triggered wonderful stories from my parents.  While getting ready for lunch, my dad mentioned that Mama Liang’s was advertising “Juan” cuisine.  Juan?  I had never heard of Juan. 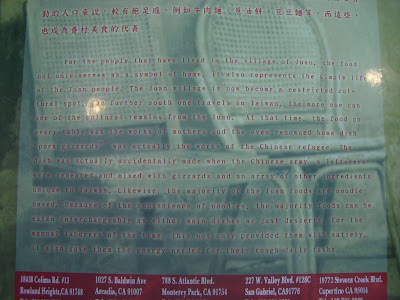 So then my dad proceeded to tell me all about it.  As you may recall, in 1949, Chiang Kai Shek’s army, the Kuomintang, fled to Taiwan after being defeated by the Communist Party.  The military people then took up temporary housing camps owned by the government.  At the time, they thought the situation was temporary, and so there was no reason to get permanent housing.

These small military villages, known as Juan Cun, were made up of the military and their families. These small villages began to develop their own unique culture.  The kids played together, went to school together.  My dad was one of these children that grew up in  Juan Cun.  The people in the military villages became very close, and as a result it was very common to call people “Mama Liang” or “Mama Lee,” etc.  Because these military families came from all different parts of China, they also brought to Taiwan the foods from their own areas in China.  One woman might begin making food from her area, and others would hear about how “Mama X” made a great bowl of noodle soup, and people would go over to try it.  From there, little restaurant shops would be set up.

Recently, a movie in Taiwan was released about the Juan Cun culture and how it is slowly disappearing. This has caused a waive of nostalgia for the people who grew up in these military camps and a lot of restaurants have started popping up, advertising that they serve Juan cuisine.

When we arrived at MaMa Liang’s, the place was packed.  Mama Liang’s specializes in a beef noodle soup, and a green onion beef rolled pancake.  The menu is pretty sparse. There are a few noodle dishes, some pork chop rice dishes, and many small dishes that are meant to be eaten with your meal. 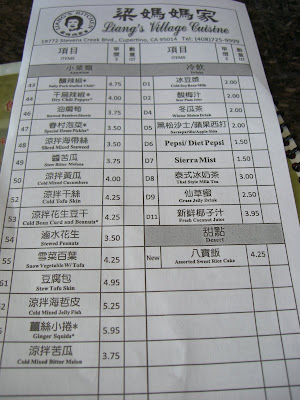 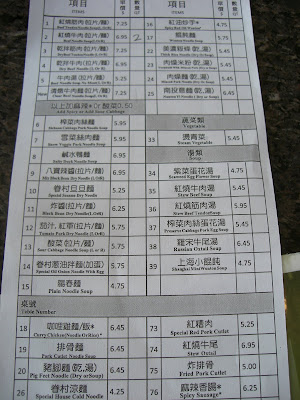 BF and I both ordered the beef noodle soup and an order of the green onion beef rolled pancake.  Mama Liang’s also specializes in its wide, hand pulled noodles, so of course we had to get that with our beef noodle soup. 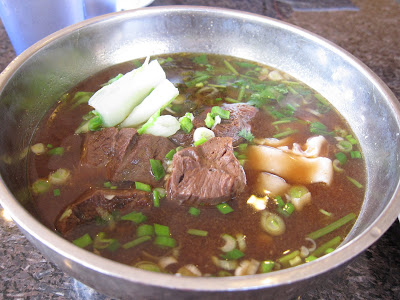 Our food arrived in metal bowls, which I thought was a peculiar way of plating the food, but I guess it is more akin to how food might have been served back in the Juan village. 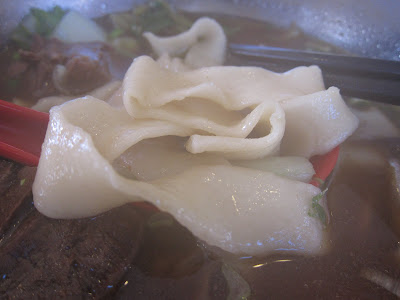 The broth of the beef noodles was pretty good.  The broth was rich enough that you could tell that the beef bones and beef had stewed and simmered in the kitchen.  Overall, though I enjoyed my beef noodle soup, I didn’t think it was as good as all the hype made it seem.  I was surprised that this place has managed to become so famous and popular with this dish and has been able to open so many restaurants.

Of course, a lot of it is in context.  If a location were to open up in San Diego, I would be there in a heartbeat.  But since all the locations are nestled in communities full of restaurants serving  beef noodle soup, I didn’t think Mama Liang’s version really stood out from amongst others I’ve sampled. 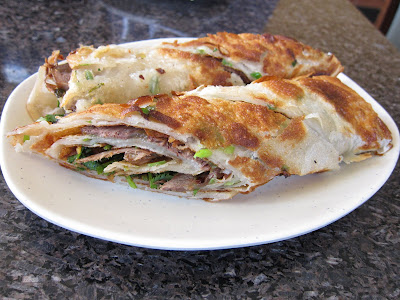 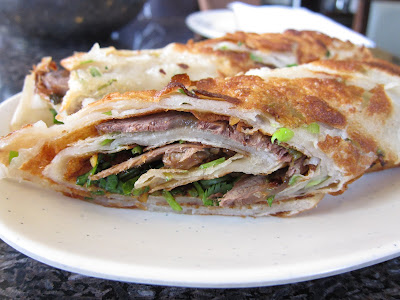 I thought this was slightly pricey ($6.75 for an order).  The beef slices are marinated and are often served as a chinese appetizer dish.  I can see the appeal of this dish since it has a lot more flavor than just a regular green onion pancake. I’ve never been a fan of these beef slices though because of the tendon portion, and I rarely eat it when my parents order it or when my mom makes it at home, so I didn’t particularly like this dish.  I think what makes this dish so popular is  the nostalgia factor.  I brought home some leftovers for my parents and my dad said the dish reminded him a lot like one he used to eat growing up.

Below is the menu:

Mama Liang’s was just alright for me. I would go back to dine again for the hand pulled noodles, but I didn’t completely fall in love with this place.