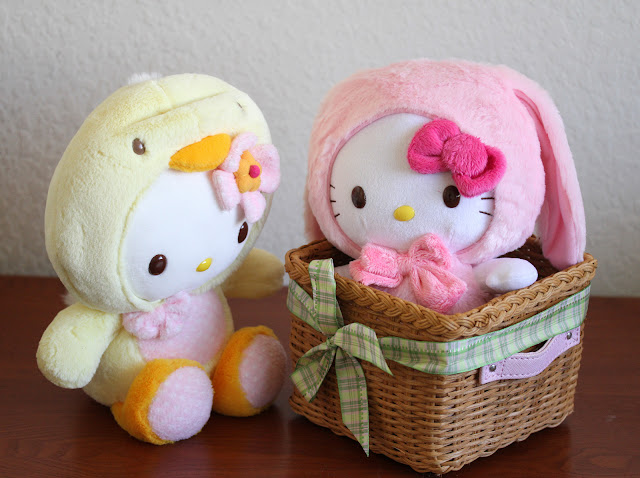 Happy Easter everyone! I hope everyone has a great Sunday.

My Hello Kitty collection grew recently, with the addition of the Hello Kitty dressed as a bunny. She didn’t come with the basket; I just stuffed her in there because she was the perfect size.

This Easter Sunday was one I was particularly really looking forward to because it also signified the end of Lent.

Until this year, for me, Lent was just this period of time before Easter where some of my Christian friends would stop eating meat on Fridays and would declare they weren’t using Facebook until the end of Lent. I’ve mentioned before that DH is Catholic. Since I’ve known him, he’s only practiced seafood Fridays during Lent.

However, last year, we made friends with someone who is Catholic and always gives up something significant for Lent. Last year, he gave up all social media (Twitter, Facebook, Instagram, etc), which was pretty huge because he’s on there all the time, documenting everything he eats, etc. This year, he took it a step further. Not only did he again give up social media, but he also gave up eating out, even though he normally eats out almost every day.

Inspired by our friend’s commitment, DH announced he would give up computer games. Computer games is one addiction DH has had since we’ve met and always been a particular sore issue for us when he gets very immersed into a game. So I was so shocked when he announced his decision. Somewhere along the line, DH suggested I give up something for Lent even though I’m not Catholic.

I dismissed the notion at first, but eventually agreed. And at DH’s suggestion, I gave up snacking. He made the suggestion because I’m constantly feeling guilty about how much I snack and my lack of self control. DH tends to only eat when he’s hungry, but I’ll snack all day and especially late at night. Chips, fruit snacks, chocolate bars, gummy candies, are all part of my nightly ritual. I love snacking while watching tv and movies and while writing posts.

Well, I definitely learned a few things during my Lent experience. First, I have a serious appreciation for those who  make a commitment to give up something for Lent and who stick to it. 40 something days doesn’t sound that long but it felt ridiculously long. I never realized how many things can fall within the 40 days, that really test your resolve. For DH, Lent spanned through the release of the new Starcraft game that he had been waiting forever to play. For me, Lent included my birthday and I was definitely one sad girl not being able to eat chocolate bars when I felt like it even though it was my birthday.

Also I realized Lent is not 40 days like the movie with Josh Hartnett has us believe. It’s actually 46 days. And yeah, I felt those extra days. In case you are wondering, the reason why it’s often said to be 40 days is that the Sundays are not counted even though you are still supposed to stick to your commitment on Sundays.

I was hoping giving up snacking for Lent would make me realize I didn’t need to snack. But truth be told, I’ve just been thinking about chips for 46 days. I also realized that it doesn’t get any easier. I thought I would get used to it, but I never did. Whether it was the first week, third week or last week, they were all equally hard.

I was hoping the Lent experience would kick DH’s gaming habit, but sadly it hasn’t. The last few weeks I’ve been amazed at all the great artwork he’s turned out now that he’s had so much free time. I was hoping he would see how productive he’s been and how much time he has wasted in the past with his games, but I know come Monday, I’ll find him at his computer playing that new game.

I hope everyone has a great rest of the weekend!

12 comments on “My Lent Experience”