The first U.S.-based Nutella Cafe opened in Chicago earlier this year. So of course I had to pay it a visit during my recent trip to Chicago. 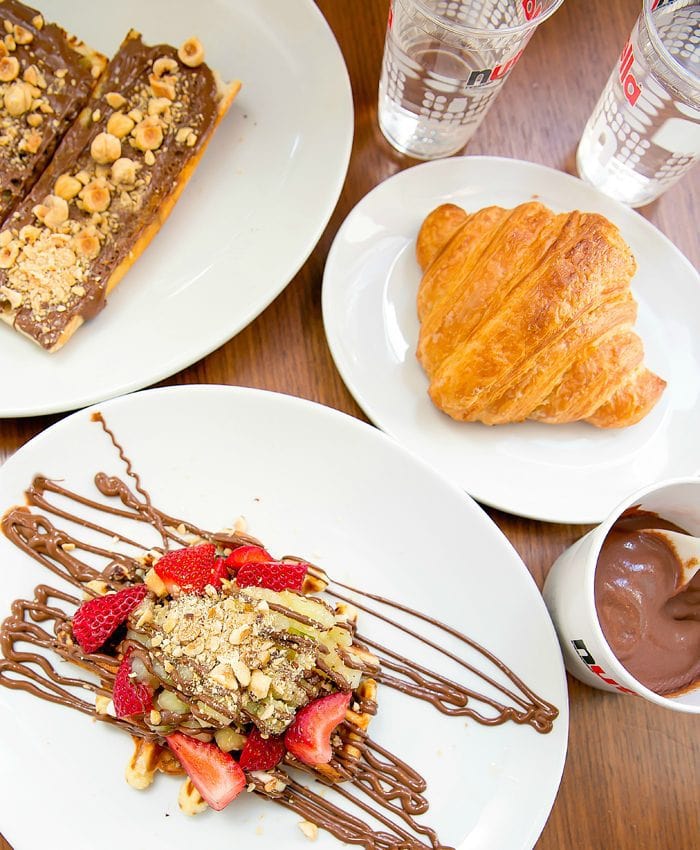 Even though it has already been open a few months, there was still a long wait to get in. We were fortunate to only wait 30 minutes as I heard many people waited over an hour. 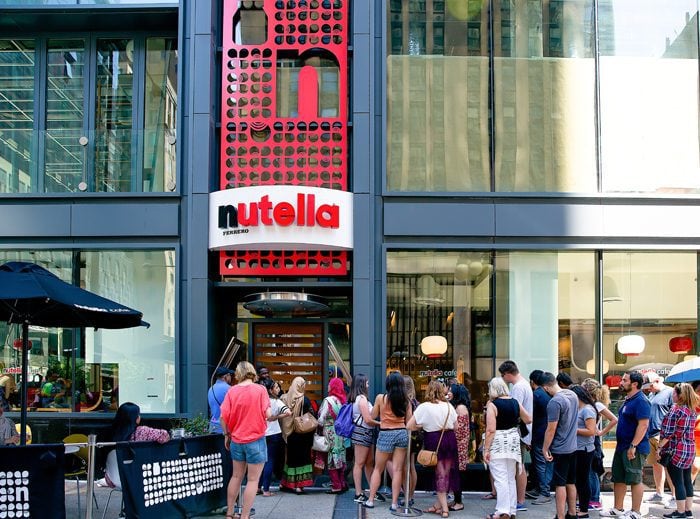 Once inside, you’re greeted to a Nutella-themed menu. Nutella gelato, Nutella drizzled over fruit, Nutella in crepes, Nutella spread on top of baguettes.

I was initially excited and overwhelmed but after having a minute to process the menu, I couldn’t help but be a little disappointed. Nearly every menu item just involved Nutella being poured over a dish, something you could easily do at home. I had hoped for more special Nutella creations.

Over the years I’ve shared hundreds of Nutella desserts that don’t just involve stuffing or drizzling Nutella on something, so I was a little surprised that the cafe didn’t have a few unique Nutella desserts to offer. 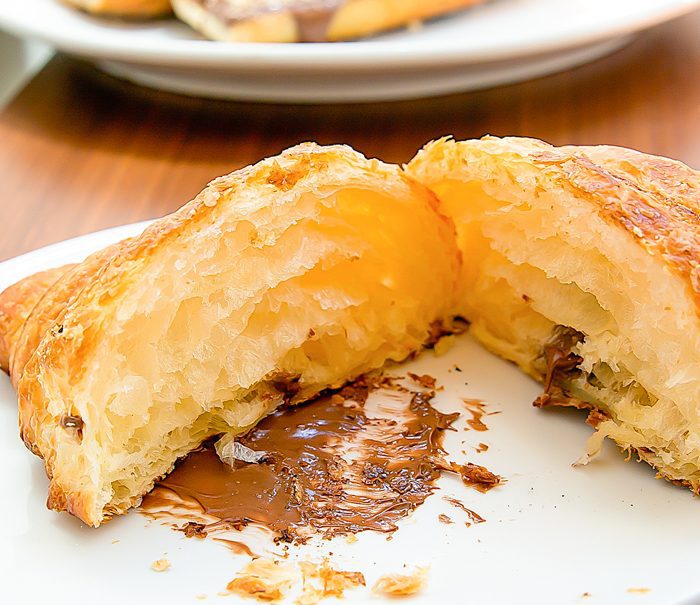 This is the Nutella stuffed croissant. However when we cut it open, it barely had any filling, except for a smear of Nutella that had sunk to the bottom of the croissant. The croissant itself was just alright. It wasn’t as flaky or crispy as I would have liked. 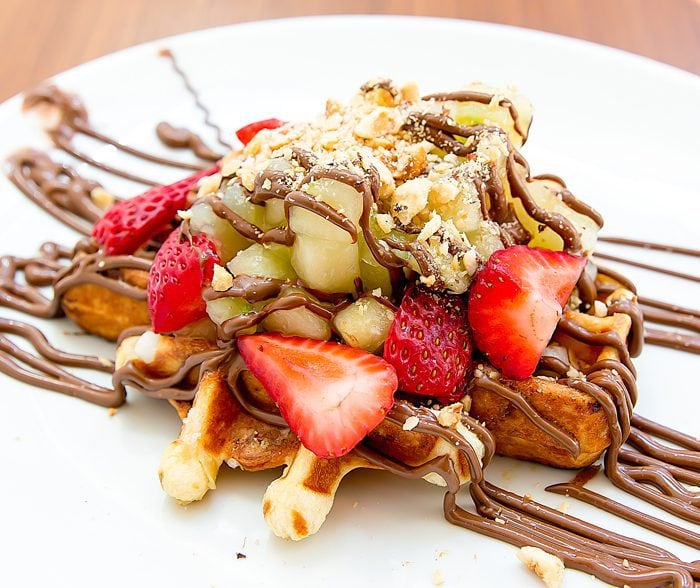 The liege waffle is topped with fruit compote. We also paid extra for the strawberries. This was the most enjoyable of the dishes we ordered. The liege was a proper liege waffle with thin, distinct layers and crunchy pearls of sugar. It tasted fine but was nothing too special. 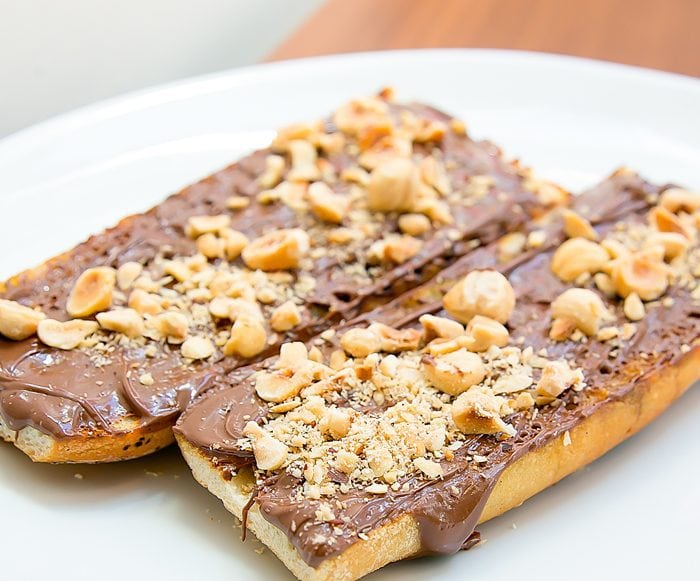 This item was featured in photos displayed on the walls. It’s not too hard to make at home as it is just slices of baguette bread spread with Nutella and topped with crushed hazelnuts.

We had a hard time eating this one though. The baguette breads were very crusty and a little hard. It made it really tough to bite and chew through the baguette. I think it would have worked better if they had sliced the baguette into smaller pieces. 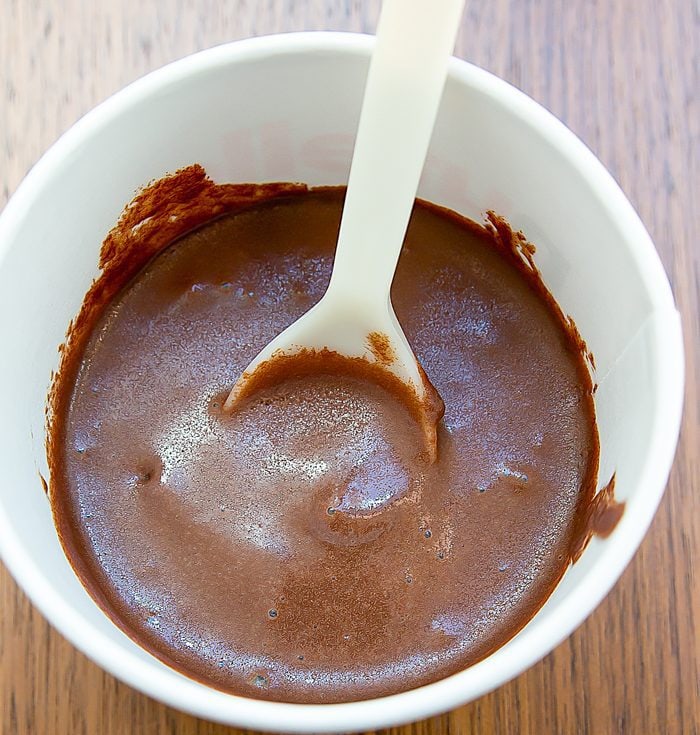 This was the saddest looking gelato. When we inquired to its extremely melted state, we were told that all the Nutella gelato was coming out this way. I feel that if that is the case, they shouldn’t have served it or at least warned people before they order and pay for a soupy mess.

Later on, when talking to one of the staff, he told us that the Nutella gelato recipe is still something they are tweaking and some days it comes out well and other days it doesn’t.

Not only was their version far too soupy, but it also had a gritty texture.

Overall, we were a little disappointed by this Nutella cafe. I hope that with time they are able to improve it. I’m such a fan of Nutella spread and I do think a Nutella cafe is a wonderful concept, but I feel that the execution wasn’t well thought out. I would like to see some unique Nutella creations offered rather than just Nutella drizzled over foods that I can make at home. I also felt the quality of most of the foods served were just okay and could be better.

I was also surprised by the fact that no merchandise was available for purchase. I was all ready to load up on Nutella souvenirs.

I will say the staff were super friendly and nice. Despite how hectic and busy things were, they were patient, cheerful and polite. 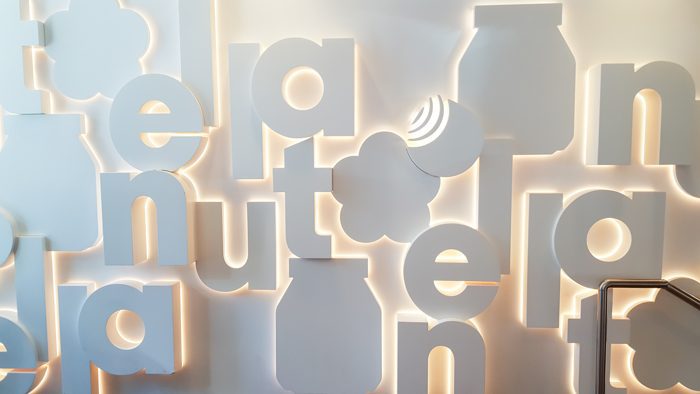