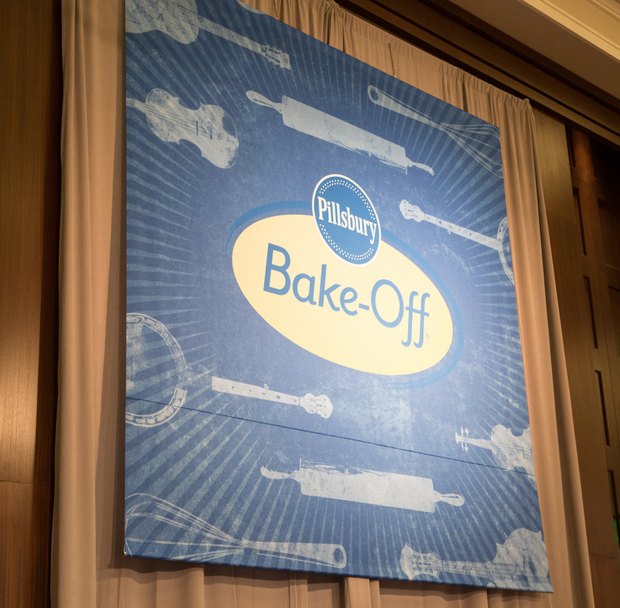 I was very fortunate to attend as media. The Pillsbury Bake-Off® is something I’ve always followed closely. I like trying out the winning recipes and of course, finding out who won the grand prize. I’ve even considered entering before. With a $1 million grand prize, it’s the biggest prize money for an amateur baking competition. 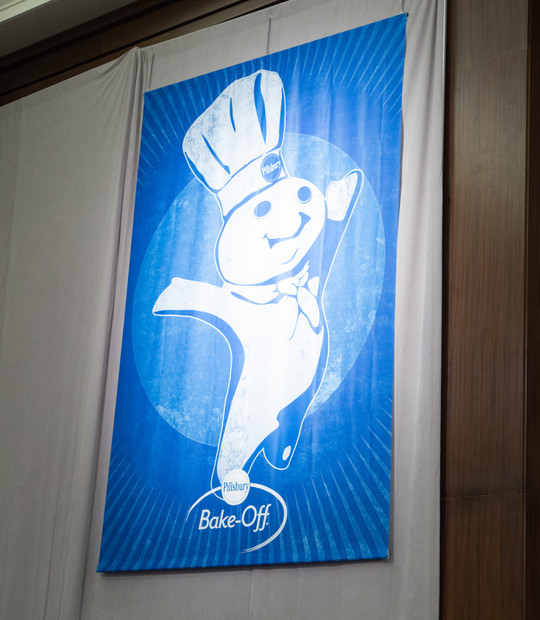 So you can imagine my excitement at getting to see everything first-hand. From the thousands of initial entries, the Pillsbury test kitchen narrowed it down to 100 recipes. These 100 finalists got to cook their recipes live. The judges then chose four winners, one from each category: Amazingly Doable Dinners, Weekend Breakfast Wows, Savory Snacks & Sides, Simply Sweet Treats. The voting is then given over to the public to determine which of the four will win the $1 million prize.

Here’s a quick shot of the contest floor before the event started. Can you imagine 100 ovens working simultaneously? Imagine all the electricity… 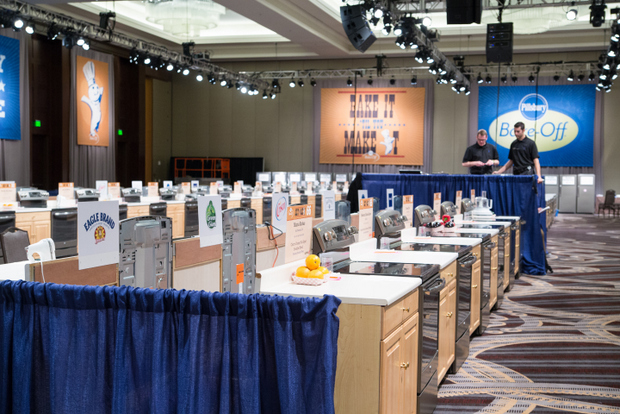 The contest started with the “grand march” where contestants paraded and danced around, with live country music, a life-sized Pillsbury dough boy, and host Chef Carla Hall (Top Chef, The Chew). After making their way around the room, the contest started. 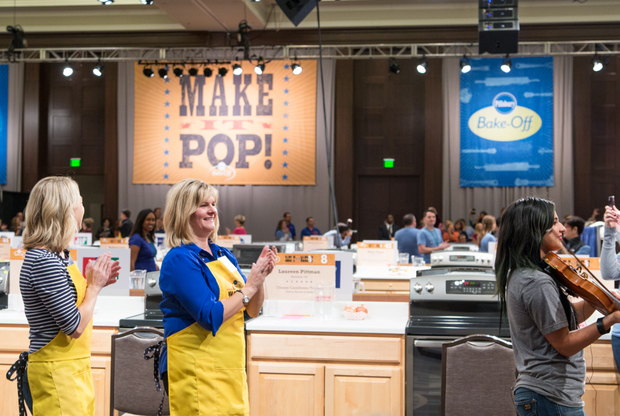 (Photo below courtesy of Pillsbury) 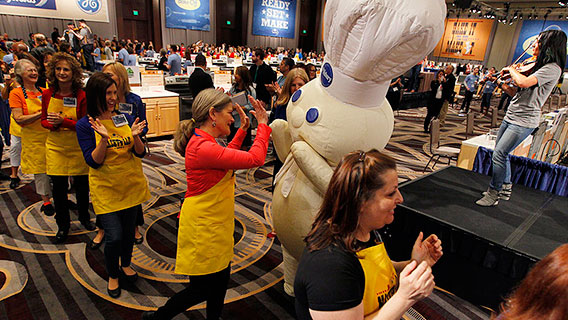 The contestants had a little more than 3 hours cook their food. They could cook up to three batches, with their favorite one going to the judges. The rest were samples for the media and others allowed on the contest floor. As media, we were allowed to walk around the entire competition, talking to contestants, sampling, taking pictures. 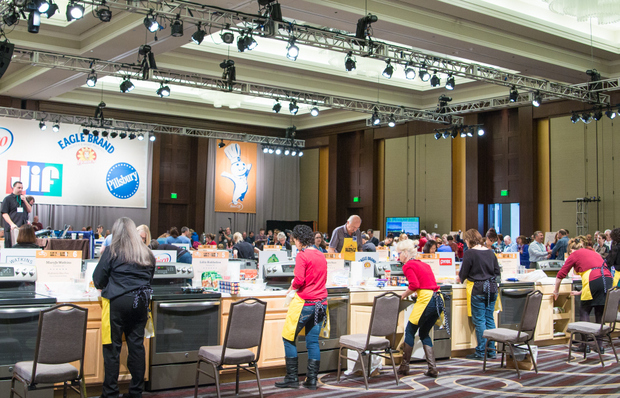 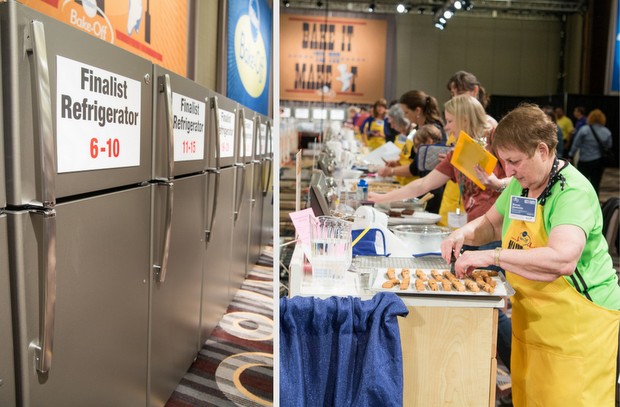 It’s hard to put to words what the atmosphere was like in there. There was so much energy, excitement, and support. Family and friends were in the room cheering. The room would break out in applause for each contestant who finished. Here’s my attempt to capture the first finisher as she carried her food to the table to be taken to the judges. 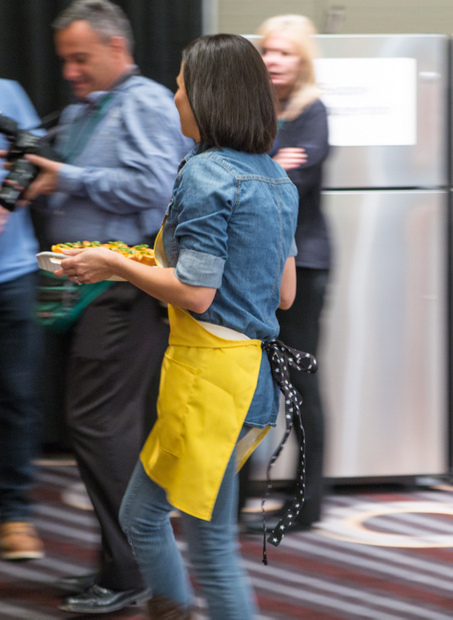 The contestants were much calmer than I would have imagined. I’m pretty sure I would be a nervous wreck if I was competing for $1 million. But they seemed pretty laid-back and calm and were very open to us coming over and taking photos and talking to them. I tried not to distract them too much. As much as I was curious to hear their stories— and there were many great stories– I didn’t want to do anything that could possibly mess them up. 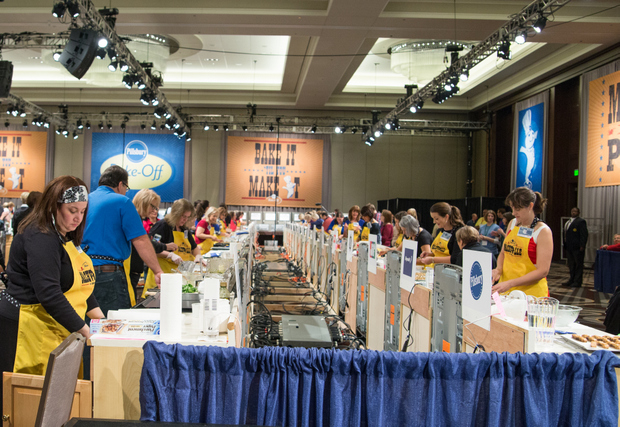 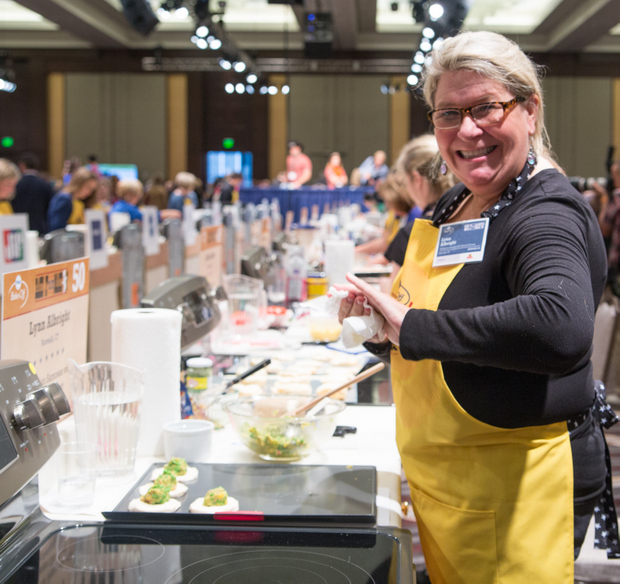 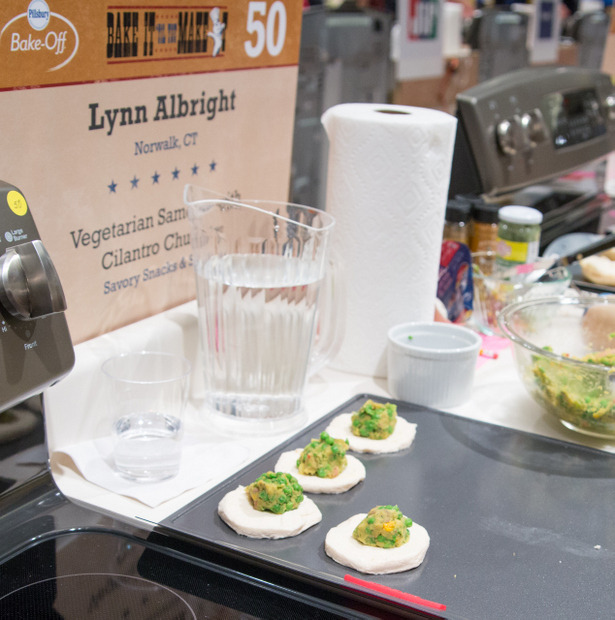 She was one of the first contestants I spoke to. She was so sweet and friendly.

Here is Betty Staufenbiel. She won the contest back in 1961 and here she is still competing. It was such an inspiration watching her! 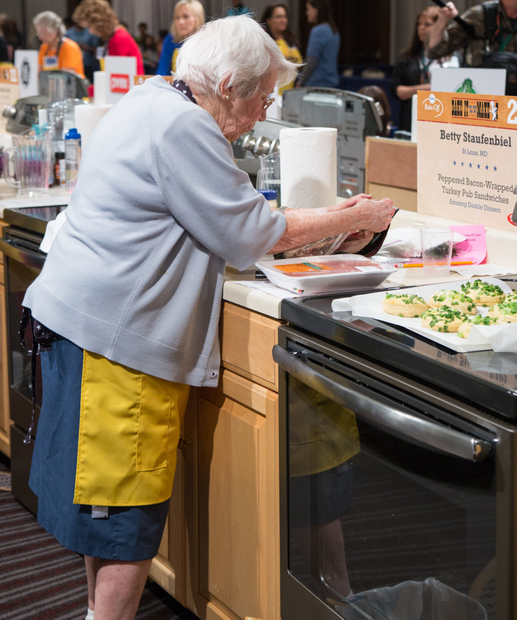 There were two San Diego finalists, so I had to make sure I stopped at their stations to wish them good luck. 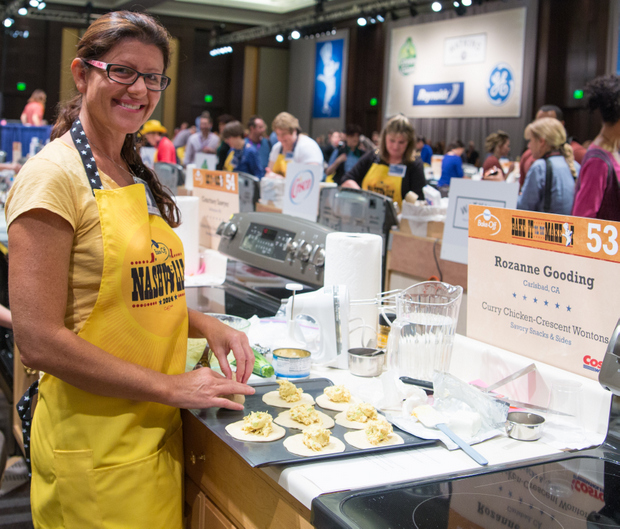 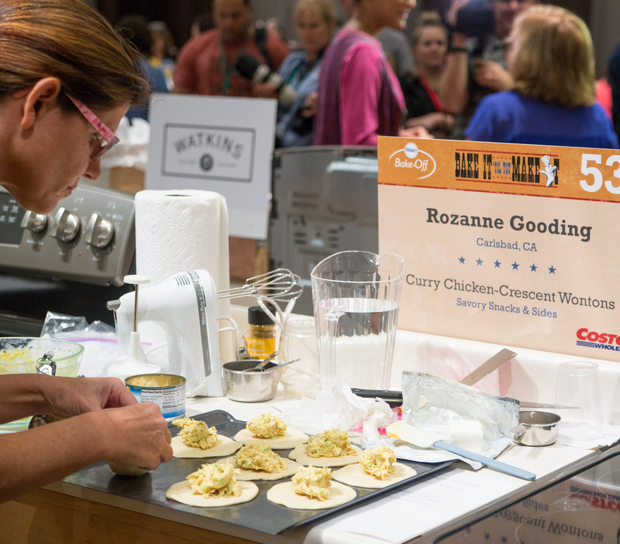 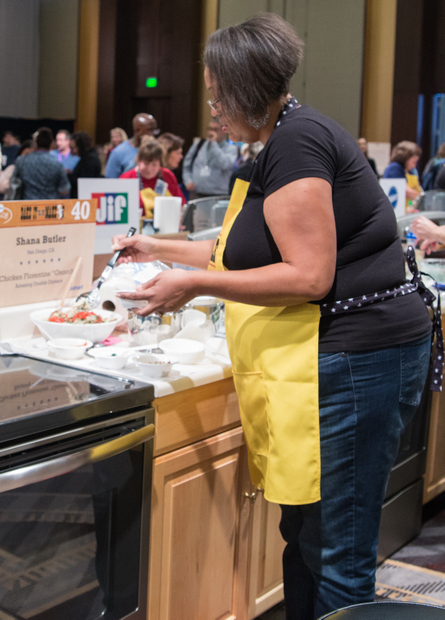 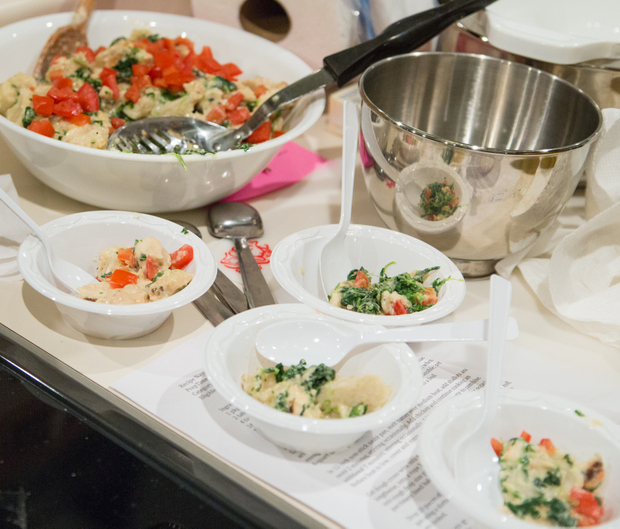 Even though all the contestants had samples, I don’t think it would have been physically possible to sample all 100 entries. I did get to sample Shana’s, and it was actually one of my favorites from the ones I did sample. Not only was it tasty, but I thought it was such a creative idea. She made “gnocchi” with Pillsbury’s French bread loaf dough. Of course it’s not real gnocchi but it tasted remarkably similar. 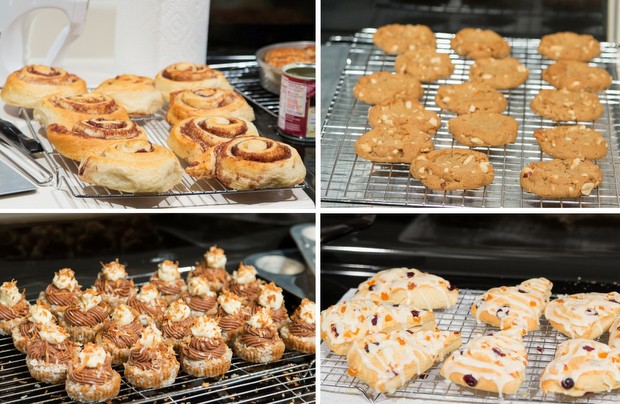 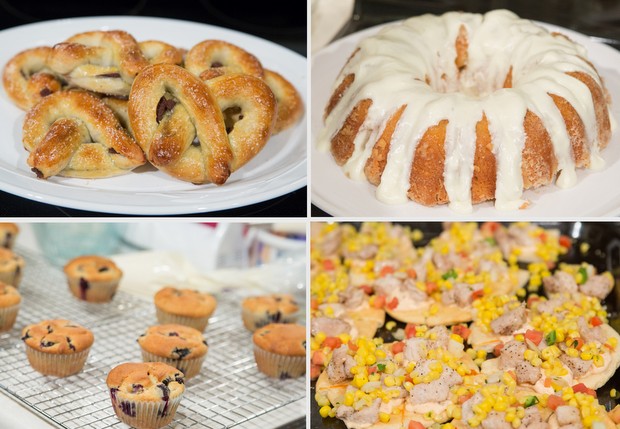 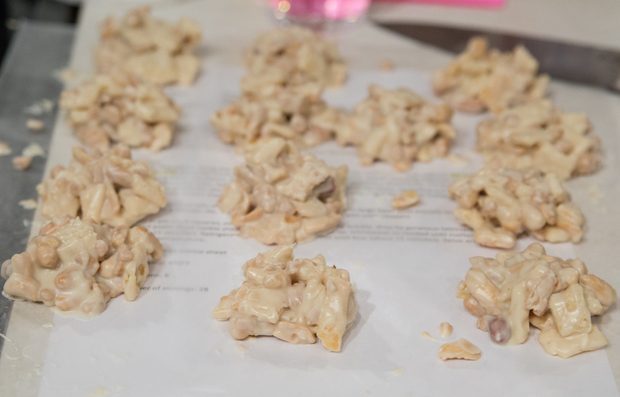 One of the final samples I tasted was this one. I initially wasn’t planning on trying it because I’m not a huge peanut butter dessert person but a lot of the bloggers were talking about how good it was so, so I went over and grabbed a sample. I really enjoyed it! It’s filled with pie crust pieces, peanuts and toffee, and held together with white chocolate and peanut butter. 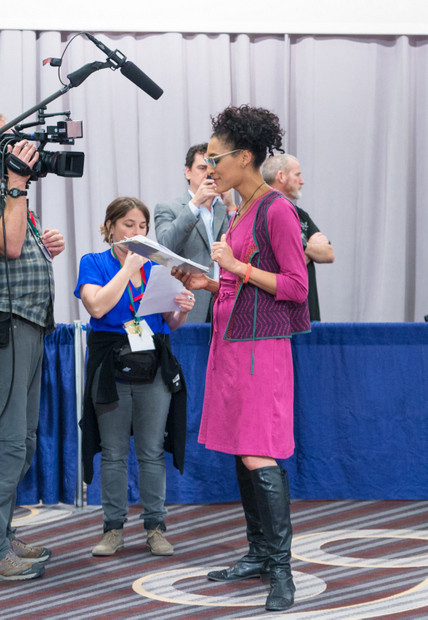 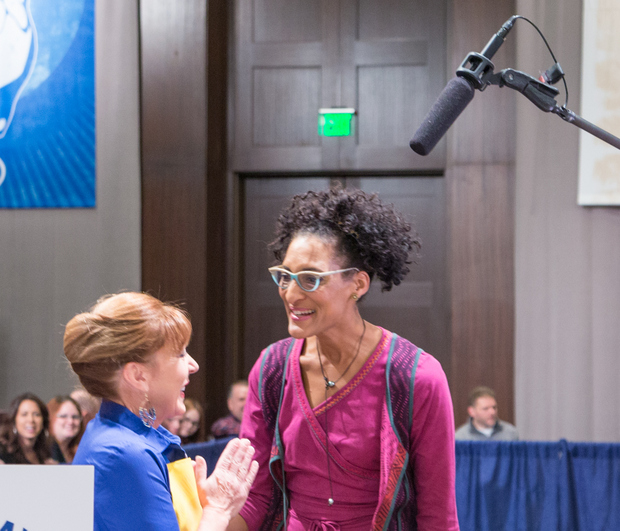 Chef Carla Hall has been one of my favorites from Top Chef, and I thought she was just the perfect host. She had so much energy and spent the competition running around and interviewing contestants. She was so friendly, hugging each of the contestants and being like a great mom to all. 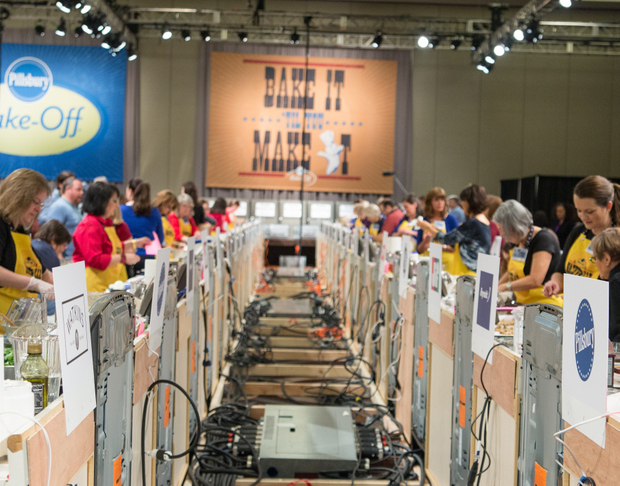 Overall, I was amazed at the creativity and tasty dishes I had while wandering the contest floor. I really did not want to be in the judge’s shoes and have to choose a winner.

Later that evening, we got to attend the awards where the four winners were announced along with some other prizes that were also awarded. Each winner got a golden Pillsbury dough statute. Gosh the statute looked adorable. I really wanted one, even more than the money prize. 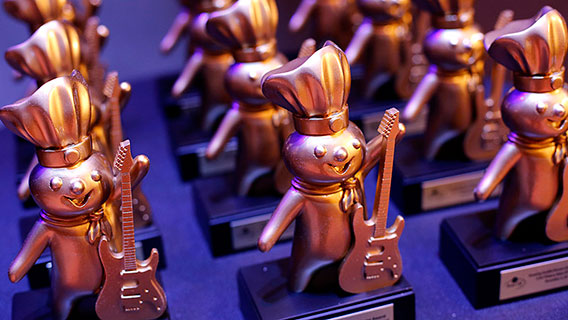 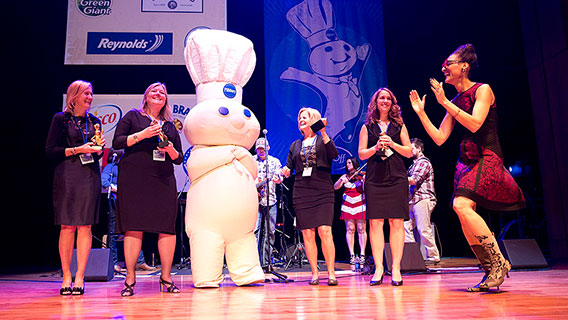 Even though I was not in the competition nor did I have any friend or family member, I found myself really invested in the results. I was silently rooting for my favorites and was definitely emotional when I would see the reactions of the winners.

So in case you don’t yet know, here are the final four: 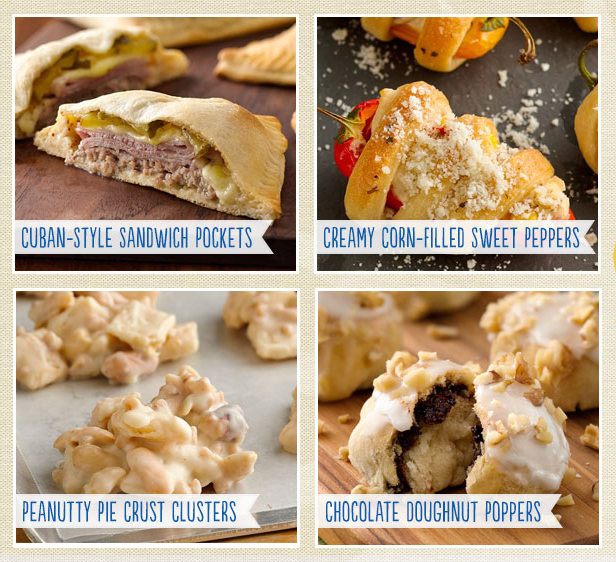 This year, the public helps decide the winner. From now until December 2, you can vote for your favorite recipe. All the recipes can be found on the Pillsbury website so you can even try them all out before deciding. On December 3, the winner will be announced on The Chew.

I got a chance to try the final four the next morning before we left Nashville. I haven’t yet decided who I’m going to vote for. I think I need to make them all before deciding. I might have to have a little Pillsbury party…

I hope everyone has a great rest of the weekend!