About a year ago, my friend wanted to have his birthday celebration at Pomegranate Russian Georgian Restaurant (referred to hereinafter simply as "Pomegranate" because the name is way too long).  I remember being a bit skeptical about the place.  The location wasn't the best area.  It also required cash only.  I'd never had Russian food though, so I was curious to check it out.  It ended up being a very interesting, fun experience.  I've been wanting to go back ever since, but never had a chance to until now.

The place is a bit hard to find.  The sign is pretty small. 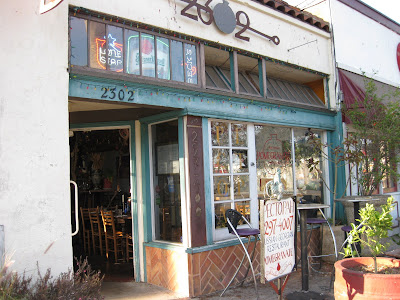 One of the most interesting things is the interior.  There is a tree in the middle of the restaurant, that grows through the ceiling of the restaurant.  Also, the walls and ceilings are filled with writing of past customers.  I'm not even sure how they got the writing on the ceiling. 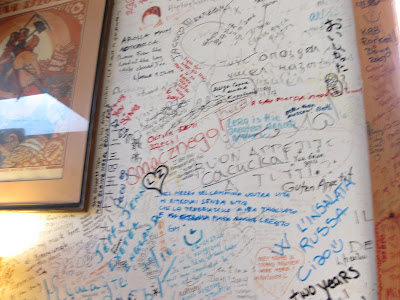 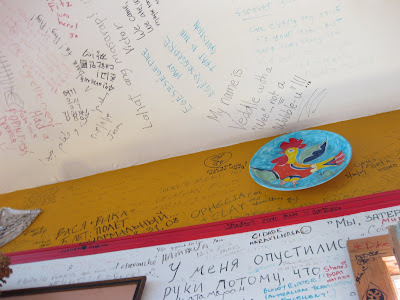 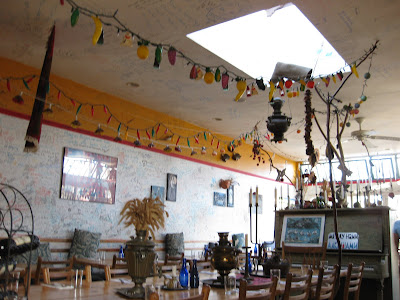 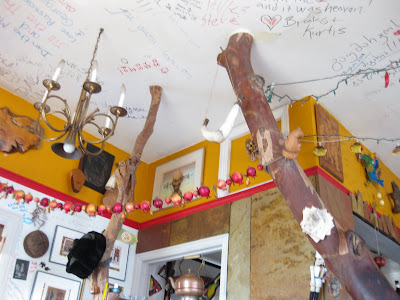 All the servers have thick Russian accents, making this place seem very authentic.  When I was here over a year ago, I ordered a lamb stew.  It was very hearty, full of different spices, and kind of just how I imagined Russian food would be.  When I picture Russian food, I think stews, meat, potatoes- things to get them through a cold winter.  The waiters are pretty friendly and are happy to explain all the different Russian dishes.

They suggested we get one of their salad appetizers, but I remember how much food I had last time and the leftovers so we decided to pass.  We started off with complimentary bread: 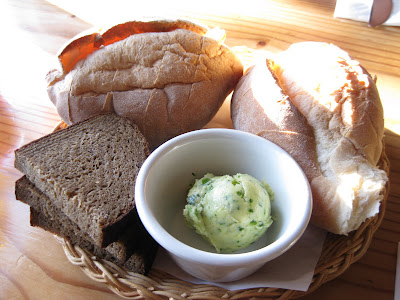 Boyfriend ordered the Beef Stroganoff.  Boyfriend had ordered the vegetarian version of this last time we were here, and it was amazing, so we were just dying to try the beef version.  The flavors were great.  A lovely blend of beef and mushrooms in the sauce.  I liked how they served the noodles on the side.  This was a very filling dish. 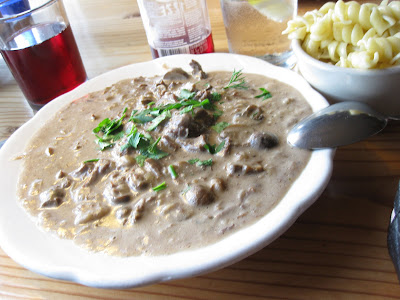 On Friday and Saturday nights only, they serve Shaslik, which is their special bbq.  They grill it outside on skewers.  One of my friends had ordered it last time, and it looked so good, that I really wanted to try it.  I ordered the lamb version. It takes about 20 minutes to cook, so we had to wait a little bit.

When it comes, they give you this whole presentation.  First, I was given a plate full of vegetables.  Then the person bbqing came over with the skewer and put the meat on my plate. He explained that he cooked it medium.  Then he poured a pomegranate glaze on the lamb.  He also explained that all the vegetables other than the squash are pickled at the restaurant. 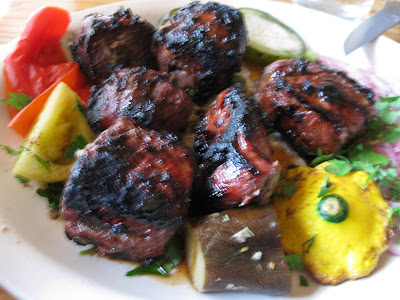 The pickled vegetables were interesting.  After a while though, I was craving something not sour.  Especially because the pomegranate glaze sauce is also sour.  Unfortunately, my meat wasn't even close to medium.  It was well done.  Lamb well done is not very good.  I also thought that the meat wasn't that special.  It's supposed to be marinated in a yogurt or pomegranate sauce and the grilled.  They make it sound so special, only serving it two nights a week.  But for $23.50, I found this dish to be overpriced and not that great.  It basically just tasted like overgrilled lamb skewers.  I couldn't taste if it had been marinated beforehand. 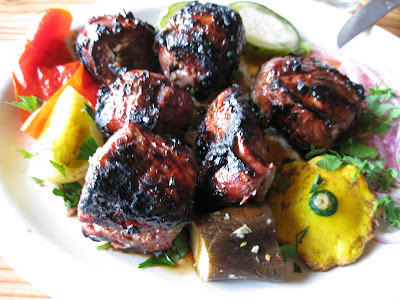 My sister got the same dish, except with beef.  They explained that the beef was best with just some lemon sauce.  Her meat was cooked medium so it was much more tender than mine.  Again, the taste was just okay.  I enjoyed her meat more than mine, but at $25.50, it really was overpriced for some beef grilled on a skewer.

As the night wore on, it got more and more crowded and loud.  It's definitely a neat atmosphere if you are going for a celebration.  The staff is friendly.  They serve a lot of alcohol including vodka by the inch. Speaking of drinks, another annoying thing that happened that night was the sodas.  I noticed on the menu this description:

I'd never had russian soda and the description piqued my interest.  We asked the waiter about them and he said they had a spicy soda, ginger soda, pomegranate soda, and some others.  So we ordered a pomegranate soda.  He gave us a bottle of Izzie!  For those of you who don't know, this is a pomegranate flavored fizzy drink that can be found at a lot of supermarkets.  And I'm pretty sure it isn't Russian. They charged $4.75 for this.  I found this to be extremely disappointing and misleading.

This visit was a bit disappointing.  However, I had fun on my previous experience, so I guess I have mixed feelings about this place.  Though I guess if you are craving Russian food, this is probably the most authentic place in San Diego.  But remember to bring cash and lots of it!