Eating a chef's tasting menu at a Michelin star restaurant has been something I've wanted to do for a long time. Since I live in San Diego, I don't get many opportunities to do so. Instead, I've lived vicariously through reading the posts of my favorite LA food bloggers.

I first took real notice of Providence when Rosa of The Catty Critic began planning her eight course dessert birthday party there. Of course, an eight course dessert definitely perked my interest.  Her post had me drooling, but I was actually more intrigued by the savory dishes they ordered in addition their eight course dessert. Upon more research, I discovered rave reviews for this restaurant, and a nine course chef's tasting menu that had me practically hyperventilating in delight. To my surprise, the prices were within my range, and a lot cheaper than some of the other tasting menus I've browsed.

Thus began my campaign to BF that we should dine at Providence this summer despite there being no special occasion coming up. I pitched it as a "summer vacation" idea.  BF didn't seem convinced. Then Rosa told me that through the month of June, Providence would be celebrating it's fifth anniversary and would be reducing its five course tasting menu to $65 (normally $85).  It was a sign.

I told BF about the deal, and he agreed it was a good deal, too good to pass up.

After horrible traffic, making me curse LA over and over again, we finally arrived, albeit slightly late for our reservation.

There are three tasting menus available: the 5 course special for $65, a 9 course for $110, and a chef's tasting menu (omasake style) for $165.  While I was very tempted by the 9 course, we chose to stick with the anniversary special.  While I was mulling over the menu, BF was busy snapping lots of pictures. I thought he had snapped a picture of the menu, so that I could refer to them later for this post, but unfortunately, he didn't take any pictures of the menu. 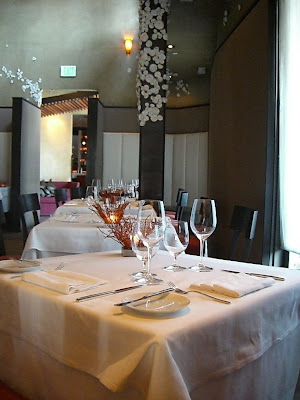 After we placed our order, we didn't have to wait long before the food started coming. One thing we really enjoyed about our meal was that while it was lasted more than two hours, it didn't feel long. There weren't any long lulls in between each course.  There was just enough space to enjoy each entree, have some time for chit chat, and then be presented with another course before one gets bored.

BF started with a cocktail called The Last Stand. It was surprisingly sweet, which is good for BF because he doesn't like ones that aren't. 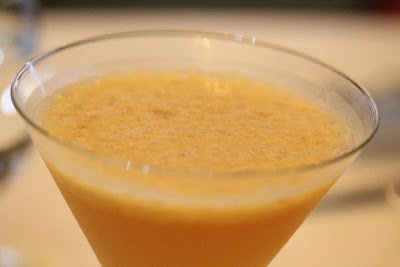 We were then served with a choice of bread: a bacon roll, olive focaccia, or a plain white roll. I chose to try all three. (I didn't want to wonder what I had missed out on!) 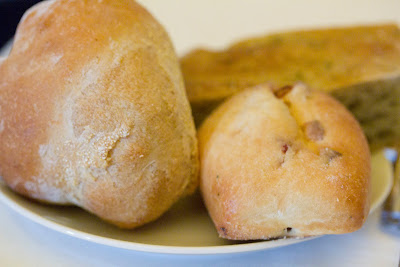 The bacon roll was rich, soft, buttery, with a sprinkling of small bits of bacon. I loved everything about this roll except the texture. For some reason, having a roll so completely soft bothered me. I don't quite know why as I've had other soft breads with no complaints. BF was understandably, completely in love with this roll. 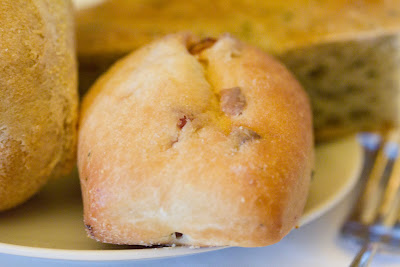 I also really enjoyed the olive bread, though I found it a bit too salty. 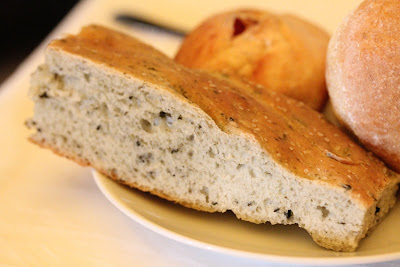 Finally, the white French roll, while ordinary, was still tasty.  A nice hard, crusty outside, with a soft inside. 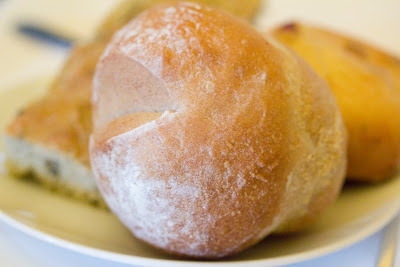 While we were still eating our bread, we were served with our trio of amuse bouche. The amuse bouche consisted of three items, all of which were described to us by one waiter, who would proceed to explain each and every dish to us that night after it was presented to us. It was a nice touch, even though I didn't absorb most of the descriptions. 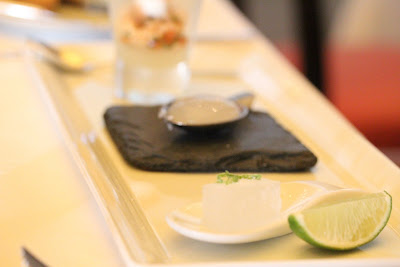 The first spoon offered a gin and tonic gelee. You squeeze the lime to activate it and then you put it into your mouth. It definitely tasted like gin and tonic but it wasn't too strong on the gin taste. Since I don't particularly like gin, this was a plus for me. 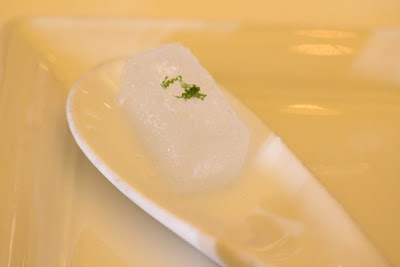 The second spoon contained a liquefied orb of margarita.  I'd seen these before, but this was my first time experiencing one. You put the whole thing in your mouth, and it bursts open, with the margarita gushing out. 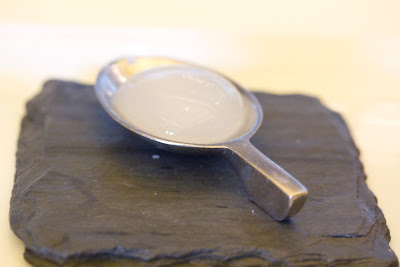 The taste was very pleasant and fun to eat.

Finally, we had a house cured trout, served with trout roe, japanese rice crackers, wasabi marshmallow and a 24 karat gold leaf. There were little bits of crackers, adding a crunch to this mixture of fish.  There were a lot of flavors in this dish and I enjoyed experiencing all of them. 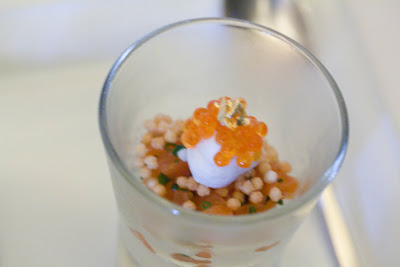 Our first real course was the Japanese Kampachi Sashimi, served with japanese rice crackers and a soy creme fraiche sauce. 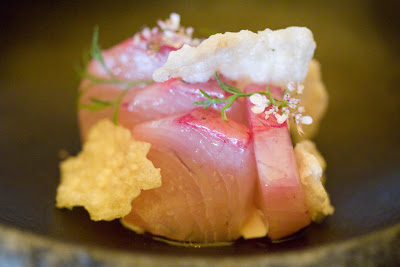 Each dish we were served that night was also garnished with some small lavender colored flowers.
As some of you loyal readers may know, I have a pretty sensitive tongue when it comes to sashimi and there's very few types of sashimi I can eat. Anything with a particularly fishy taste I cannot stomach.  As a result, there is not much sashimi that I usually enjoy. At the most, I tolerate various ones, but I rarely truly love it.  The Kampachi was one of the few exceptions. I absolutely loved this dish. The fish was incredibly fresh. I loved the combination of the crunchy, wafer thin rice crackers and the tangy sauce. I ate every bite of this dish and could easily see myself eating this all day long.  I haven't felt this way about sashimi since eating uni for the first time.

Our next course was a Hokkaido scallop, served with Japanese eggplant, ramps, reduction of vadouvan and sauternes, and cashews 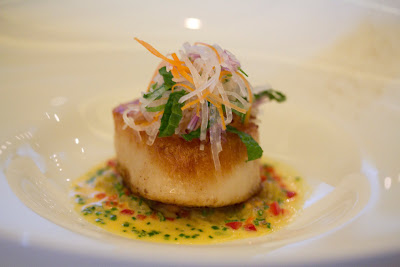 I think this was the most perfectly cooked scallop I've ever had. It was cooked, but barely, letting the scallop maintain its tenderness and all its flavor. The sauces worked beautifully and really enhanced the flavor of the scallop.  BF commented that it was the first scallop he's ever enjoyed eating.

After these two dishes, I worried we would never be able to do fine dining again in San Diego, and I regretted cursing LA traffic. 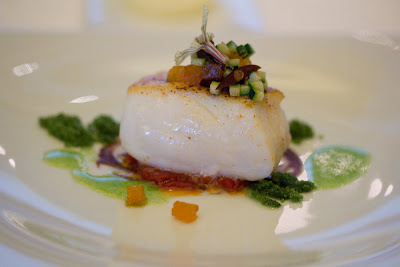 I wasn't nearly as impressed with this dish as I had been of the previous ones. I found the fish a bit bland in taste, and I found the different sauces and items accompanying the fish to be clashing. There was a tomato marinara type sauce that I didn't like with the fish. I also didn't like the olives, but then I don't like olives.

Next, came our supplemental dish. In my research prior to our dinner experience, I had read several posts, in particular, reviews by Kung Food Panda, Diana Takes A Bite, and Food Je t'aime. Each of them had ordered a supplemental dish of Spaghetti alla Chitarra (pasta served with Santa Barbara
sea urchin, spot prawns and basil.)  Since I'm a big fan of uni pasta, I just had to try this out. 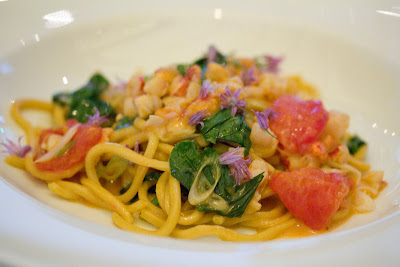 To my surprise, our dish was served  not divided. When we had ordered the dish, the waiter told us they would divide it for us.  When I read the posts of KFP, and DTAB, theirs had been divided as well. It wasn't a huge deal. But we definitely weren't as adept with dividing the dish amongst the two of us.

I loved the creaminess of the sauce and the al dente texture of the pasta.  The strong lime flavor was something I didn't particularly love and could have done without.

The next course was a veal course.  Both KFP and DTAB had substituted the veal for another fish course that looked amazing. Not being a huge fan of veal, I decided to do the same. However, I also read great things about the veal, so BF opted to stick with the veal.

KFP and DTAB had been given a striped black bass that was pan fried and had a layer of crispy skin. My dish was not the same, to my great disappointment. Instead, it was a john dory fish, with no skin. Both the veal and the fish were served with almond paste, almonds, sweet peas, maitake mushrooms and finish of balsamic glazel. The fish was thoroughly cooked (a bit too well done) and rather tasteless. I'm not a particular fan of balsamic reduction sauces, so I didn't like it here either. The only part of this dish I enjoyed was the sweet almond paste sauce. 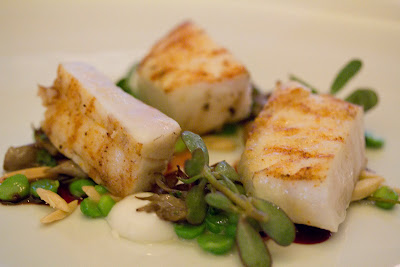 BF wasn't a fan of the veal, and neither was I. I don't know if it was the preparation or how we feel about veal. The meat was very tender but had a strong smokiness to it that made me feel like I was eating ham. 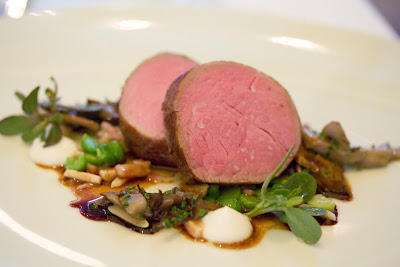 Our meal ended with a Yuzu curd, accompanied by blackberries, sorbet, and meringues. While I don't particularly like citrus based desserts, this one was still pretty tasty. 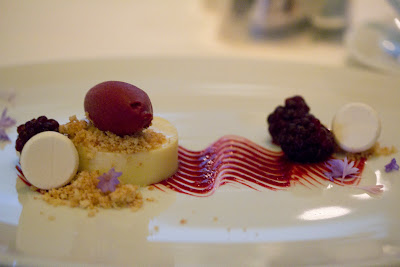 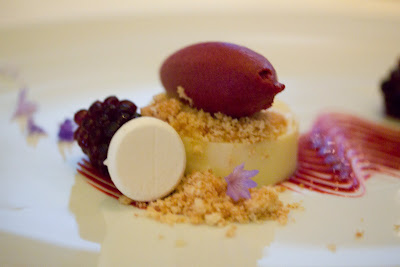 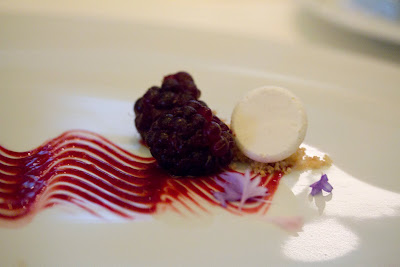 To end our meal, we were presented with a complimentary trio of sweets. I was very happy to see the macaron as one of the sweets.  The other two consisted of a pistachio nougat and a chocolate marshmallow. The pistachio nougat was nothing special.  The marshmallow was homemade and had a surprising spicy kick at the end. My favorite was of course the macaron. I loved how chewy it was. Sometimes the macarons I get have a very airy texture and not enough chew in the macaron shells.  These shells were definitely chewy. 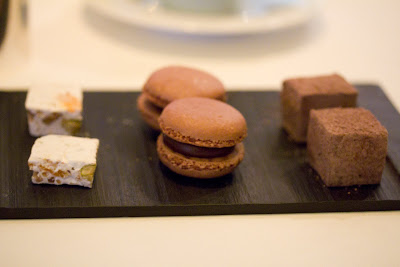 While there were some disappointments, all in all it was a wonderful meal. BF loved the variety of foods we got to try. We left very full. I'm not quite sure how we would be able to eat a 9 course meal, but I vow to come back to try it sometime.

For those interested in this deal, I just received an email from Providence announcing that they are extending their anniversary special through the month of July. So you can still try it if you haven't already.