by Kirbie
Jump to Recipe
8480 shares

This low calorie and popular food trend can be easily made at home with just a few ingredients! 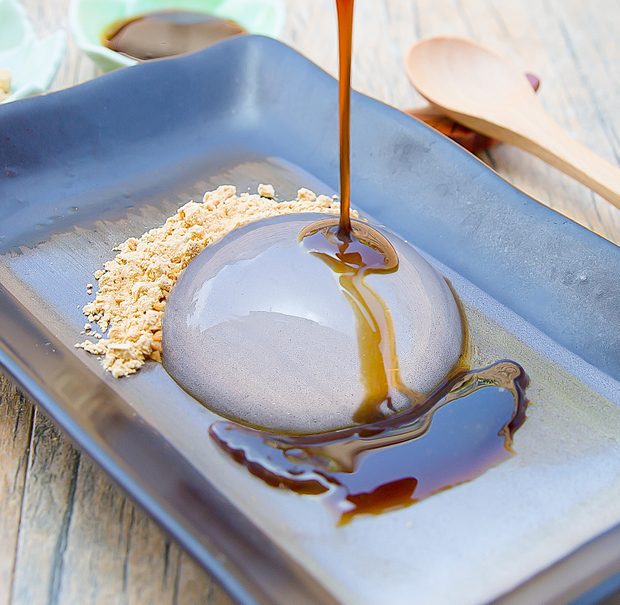 Over the last few months, I’ve been very intrigued by the Raindrop Cake. Inspired by a traditional Japanese dessert, Mizu Shingen Mochi, the dessert was introduced to the US by Chef Darren Wong at Smorgasburg in New York. Since then, the unique looking dessert has become very popular. 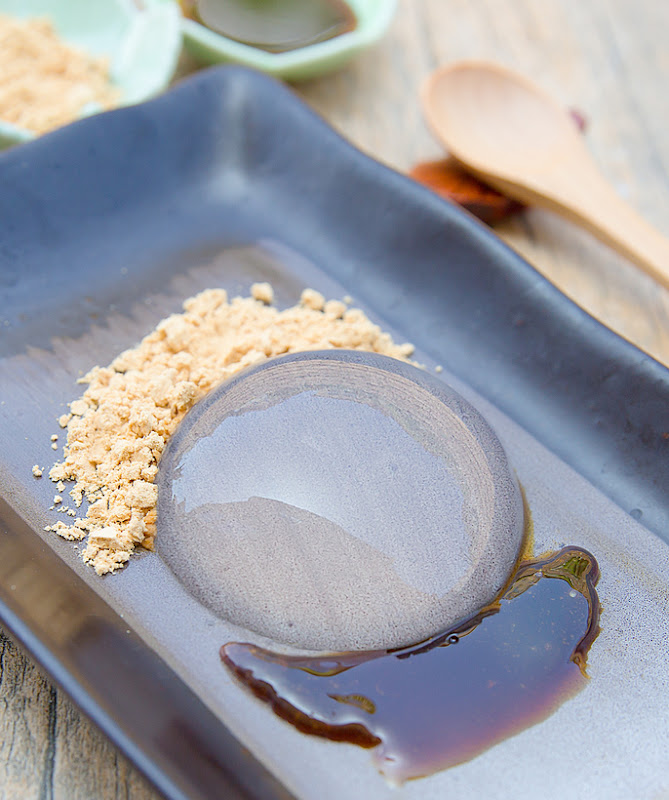 The name Raindrop Cake comes from its appearance– which looks like a giant raindrop– as well as the taste. When you bite in, the dessert dissolves in your mouth, like eating rain. The dessert is very delicate and is supposed to only hold its form for about 30 minutes. 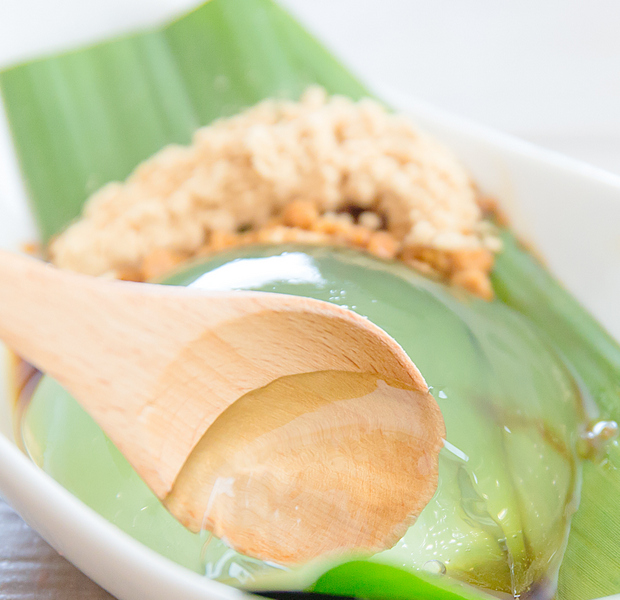 The raindrop itself is made out of only two ingredients: water and agar. By itself, the cake is fairly tasteless. But it’s paired with roasted soy bean flour (kinako) and black sugar syrup (kuromitsu), which add sweetness and texture. The end result is a surprisingly refreshing dish which I really enjoyed. The dessert is apparently also very popular in Japan because the raindrop itself is almost zero calories. (Even with the toppings, you’re looking at around 50 calories per serving.)

Even though the raindrop cake is only two ingredients, it actually took me several trials before getting the right proportions. Before attempting to make it, I did a lot of research. I’m documenting my findings here, so that hopefully you won’t have to go through the same trial and errors and can have success on the first try.

Agar. Agar is a a gelatin-like substance that is derived from algae. It is commonly used in Asian desserts, especially any that have a jelly consistency. Normally, agar-based desserts have a somewhat firmer, jelly texture. However, based on all the descriptions I read about the raindrop cake, it’s supposed to be very delicate and only hold its form for about 30 minutes before dissolving.

When I started reading through recipes, I found big discrepancies in the amount of agar used. Some recipes called for a few grams (which is the equivalent to a few teaspoons) and some called for barely 1/8 of a teaspoon. When I used a larger amount of agar, the mixture was cloudy and the end result was very firm. It would set within an hour and it did not dissolve in my mouth. I’m still puzzled by how the recipes work with the large amounts of agar, but I do have one theory. I think that the recipes that call for the larger amounts of agar are using a special agar, even though the recipes just say “agar powder.” I noticed a few videos talk about using a Japanese-style agar or a Cool Agar. I’ve never worked with either, but just the name Cool Agar makes me think it’s an agar that would keep the crystal clear appearance and not turn cloudy like regular agar powder does. I also think that the Japanese version may be firmer than the one introduced in the US. When I was looking at the videos, the cakes didn’t seem to be quite as delicate.

When I used a very small amount of agar, the water did just barely turn into a cake. At first, I tried 1/8 tsp. This was enough to allow the cakes to set, but they were a little too delicate. When I tried to take them out of the molds, they broke in half. So I played around with it, increasing a little more agar at a time, until I found the right balance. I was surprised by how much of a difference a tiny bit of agar could make. For instance, adding just one more 1/8 tsp was enough to make the cake look more opaque than translucent.

These are the basic ingredients you need: 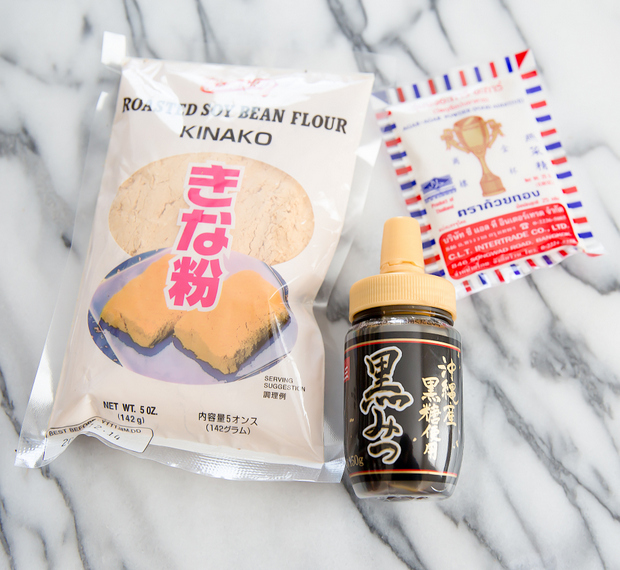 The agar powder can be found at most Asian supermarkets. Make sure you buy one that is pure agar powder. The two toppings (roasted soybean flour and black/brown sugar syrup) can easily be found at a Japanese market, though you can also make the syrup yourself. It’s basically a simple syrup made with brown sugar.

To get the shape, I bought this Freshware 6 Cavities Half Circles Silicone Mold. It seemed to be about the right size as the ones I’ve seen in photos and you can make six at a time. They also slide out very easily. You can try using other similar shaped molds, just make sure you use something that allows you to easily remove these because they are delicate and you don’t want to break them. I’ve seen people use the sphere ice ball molds. I actually own those as well, but I wasn’t sure how well they’d turn out in those, so I didn’t try. 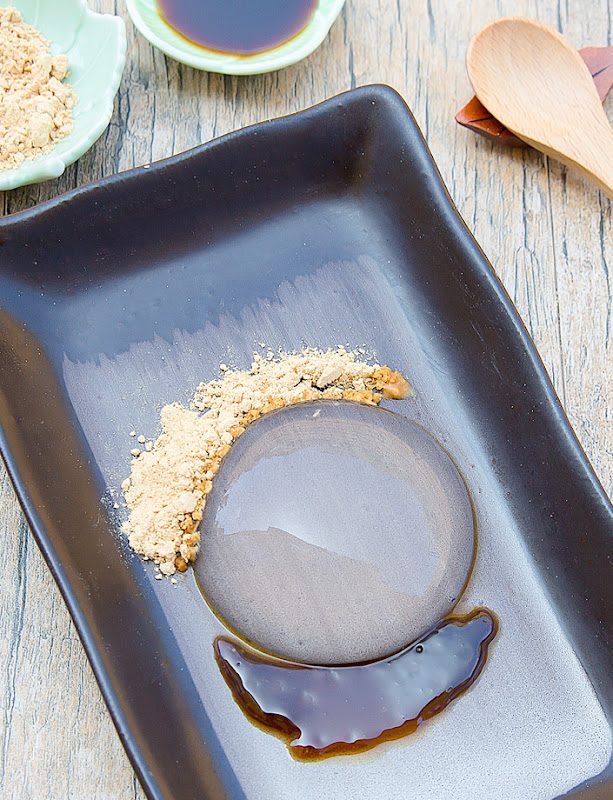 Overall, I actually really enjoyed this dessert. The soybean powder mixed with the black sugar syrup is a delicious combination. When eaten with this water cake, it becomes a very light and refreshing dessert.

Update: Since this post I have experimented with this cake even more and figured out how to make it looks crystal clear, similar to how it is served at cafes. You can check out my cherry blossom version to learn more. 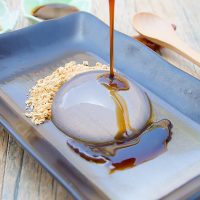 Did you make this recipe?I'd love to see it! Mention @KirbieCravings and tag #kirbiecravings!
8480 shares
Posted in: Asian dishes, Japanese, Other desserts, Recipes
33 Comments // Leave a Comment »