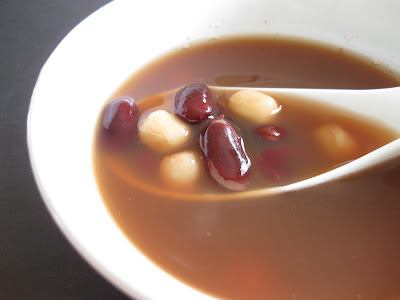 Red bean soup is one of my favorite chinese dessert soups.  It's a sweet soup that can be served hot or cold.  I only wish it was a soup that I could have instantly when I am craving it.  Instead, it takes a bit of cooking.

To make red bean soup, first you need dried red beans which can be purchased at Ranch 99 or other asian grocery stores.  You can choose from large red kidney beans or small red beans, depending on what you like.  First, you need to soak the red beans in water.  I usually use about a cup of red beans when I make a small pot of red bean soup, but it really depends on how much you enjoy red beans.  I soak the beans for approximately half an hour.  This lets the beans soften and makes the cook time faster.

After half an hour, dump out the water the beans are soaked in. Then put the dried beans in a fresh pot of water and boil.  Boil at low heat for approximately 30 minutes or until beans are soft.  Then add sugar until the soup is sweet enough for your taste.

It takes quite a bit of sugar to sweeten red bean soup, so usually I will use brown sugar rock bars.

I sometimes add small pieces of taro with my red bean soup.  I also will add taro balls, which can be found in the frozen aisle section of Ranch 99.  And I always add glutinous rice balls, a common ingredient you will find added to red bean soup and definitely my favorite.  I love glutinous sweet rice balls, so I usually add a lot of them.

To make glutinous rice balls, you will need a bag of glutinous rice flour.  Pour some flour into a bowl and add some water and mix until it forms a sticky dough. Then make small balls and drop into boiling red bean soup.  The balls are ready as soon as they float to the top.  They need only about a minute to cook, so don't add them until the end. 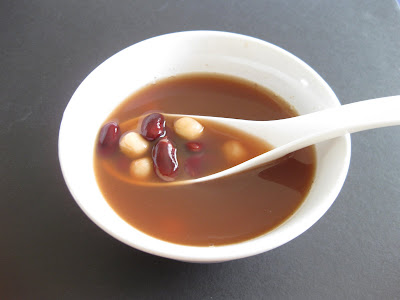 Posted in: Asian dishes, Other desserts
0 Comments // Leave a Comment »