I love dim sum. It’s one of the things I’m constantly craving and rarely get sick of. When I saw mmm-yoso’s posts on Sea Harbour restaurant and Elite Seafood restaurant, I was immediately drawn to the unique dim sum dishes offered at both places that are not the typical dim sum dishes found elsewhere. Both Seafood Harbour and Elite Seafood have taken the upscale dim sum route. Gone are the ladies with the carts. Instead, you order the dim sum dishes off the menu. The dim sum is a bit pricey, but there are a lot of items, many with expensive ingredients.

I finally got around to checking out one of the restaurants a few weekends ago. I had a hard time choosing which one I wanted to check out first, but I ultimately decided on Sea Harbour.

We arrived pretty late, and I was amazed that there was still such a long line of people waiting for dim sum. We waited about 20-30 minutes before grabbing a table.

Once seated, we were immediately presented with a couple of tea options.  Then we were given a menu and an ordering sheet. With over 100 items, it took us a while to decide what we wanted.

We ended up ordering a lot.  It was a bit of a special occasion and we had driven from San Diego, so why not? After we ordered, the waiter came back and asked “You know you ordered a lot right?” I hate when they ask that question. 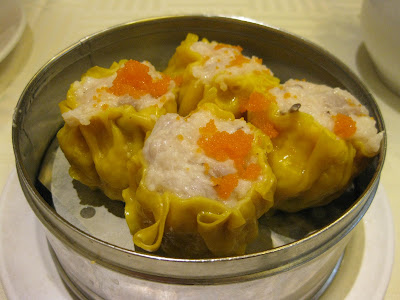 These were very plump, much bigger than the typical dim sum places, and topped with masago eggs.  Normally they are topped with some shavings of carrots for the color. 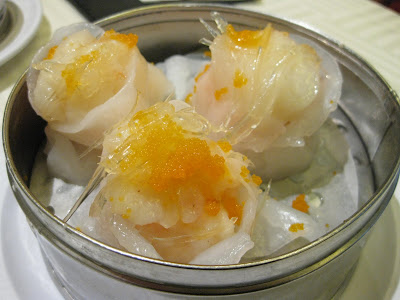 This dish was so pretty. I wish I had my dslr on me to do it justice. This was one of my favorites as well. The bottom was filled with shrimp. The top was a scallop and then there were strands of shark fin on top and some masago eggs. 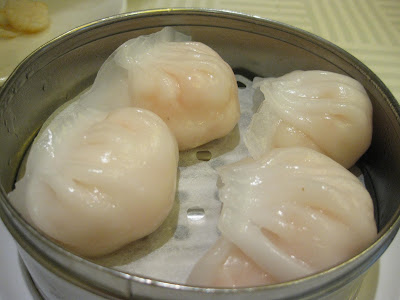 Again, this is an item that is usually found at dim sum. Except that these were much plumper than the ones I usually find and they were filled with shrimp. There were about three small-medium sized shrimp stuffed in each one.

Sticky rice ball with salted egg yolk. I was curious about this one. The shell was sticky and sweet, like mochi. I didn’t really taste the salted egg yolk though. Instead, the center was a creamy, yellow sweet filling. BF really liked this one. 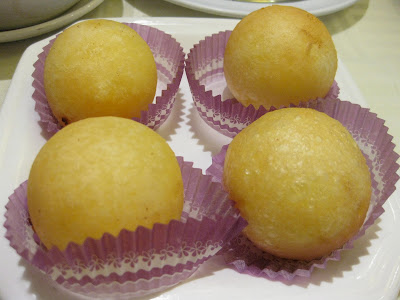 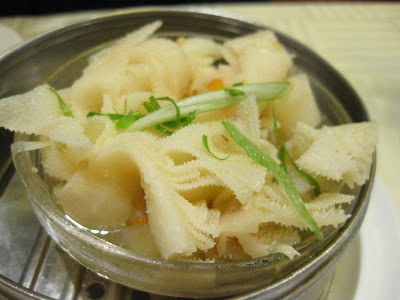 French style goose liver wontons. These were basically shrimp wontons with a small piece of liver in the middle. 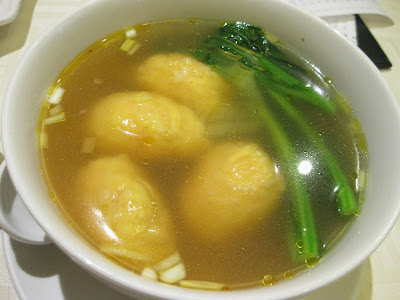 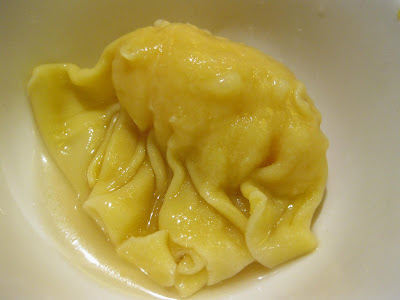 The wontons were plump and full of shrimp and a tiny piece of liver was in the middle of each one. It was so tiny though you couldn’t really taste it.

Chestnut dumplings. Normally I’m a fan of chestnuts, but I didn’t particularly like the taste of these dumplings. 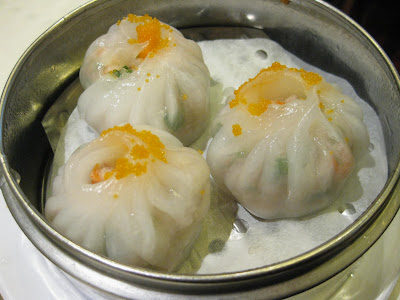 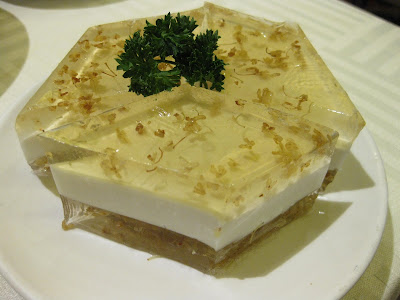 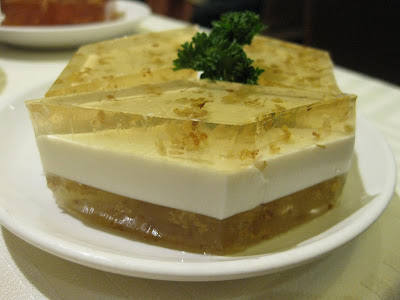 I loved how this dessert looked with the layering. And I really liked how the top layer has the flower petals inside. I believe the pudding is made with agar agar jelly. It wasn’t very sweet and was just right for me. 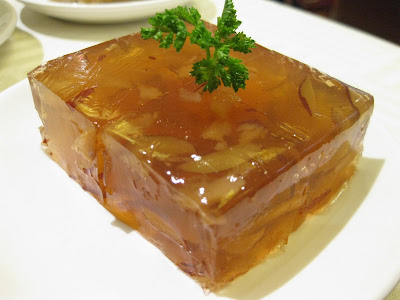 I also enjoyed this agar agar jelly creation. Inside were the herbs you often find in a chinese herbal soup, but only the sweet ones like goji berries and dried longan, which are the ones I usually like so it was nice to eat it in this dessert form.

Fried fish paste balls. I was pretty disappointed with this. This was a special menu item. I could taste the fish paste, but the choice to deep fry this interfered with the taste and made it tough with a texture more like a fish ball. 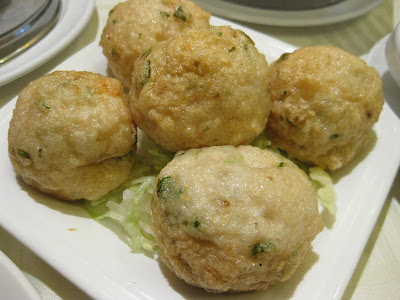 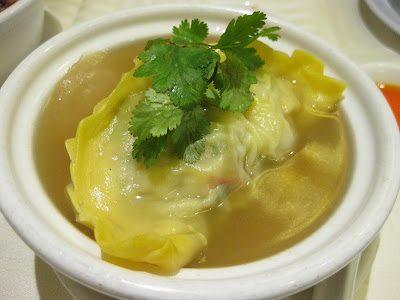 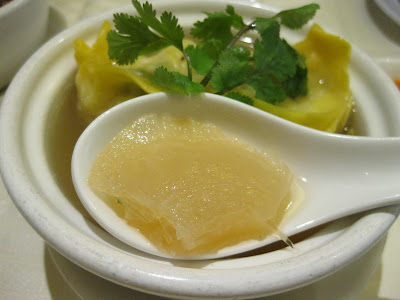 A small single bowl, filled with the biggest dumpling I’ve ever seen and a small piece of shark fin that is still intact, rather than broken up into strands. The dumpling was filled with seafood. The broth was very light. You could taste the shark fin, but the broth didn’t have much other flavor. I enjoyed the dumpling and the shark fin though. 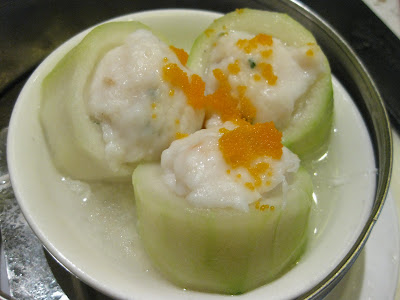 I really liked the sauce of this. It reminded me of the lobster/seafood sauce sometimes used at chinese restaurants. 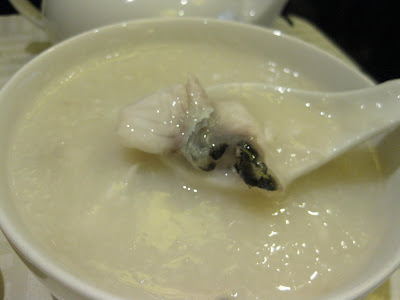 I enjoy porridge but I’ve never had it with live carp. I’ve had live fish prepared at chinese restaurants before. If you enjoy eating fish, it’s an experience you must have. A live fish is freshly killed and cooked in a number of ways. Usually you can choose two or three methods of having the fish served. The first is almost always a fish broth made with the freshly killed fish. The taste is rich and heavenly. There is a such a difference in using a live fish and you can taste it in the broth and when eating the fish itself.  Anyhow, the live fish here gave the congee a rich fish flavor. 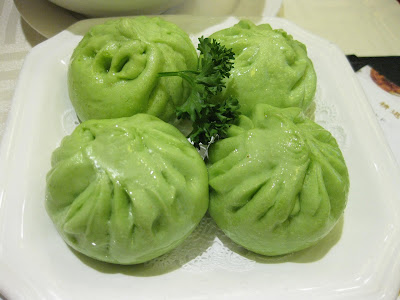 I got these mainly because of the pretty green color. The bottom was pan fried, but you couldn’t tell because the bun was soft all over. If it weren’t for the brown golden edges at the bottom I would have thought the whole thing was just steamed. These were a lot oiler than I expected, and not my favorite.

Overall, it was a pretty good experience. We’ll have to go back again to try some more dishes. The service was very good. We were never more than a minute without a server nearby. The decor of the restaurant is somewhat rundown, which I found surprising given that it has taken an upscale route. I liked all the different dim sum choices and the ability to try things with expensive ingredients like shark fin, foie gras, live fish, etc.