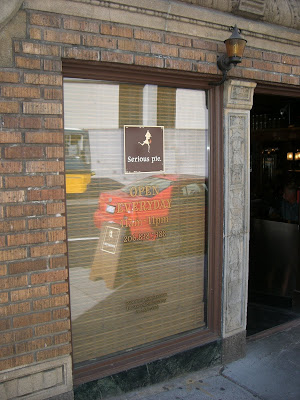 So when the opportunity came to spend a few days in Seattle with some friends, I gladly seized the chance to take a trip. I'd never been to Seattle prior to this visit. Before I started being interested in food blogs, the only thing I knew about Seattle was that it rained a lot and it was home of the doctors on Grey's Anatomy.

A few months ago, I started reading about Seattle being quite a culinary center, offering lots of great food, which definitely piqued my interest.

A visit to Seattle meant having to try some of the many restaurants that are part of the Tom Douglas empire. Tom Douglas is a winner of the James Beard Award, and he beat Chef Morimoto on an episode of the American Iron Chef.  He currently owns about 7 restaurants in the Seattle area.

On our first night, we arrived starving and decided to check out Serious Pie, Tom Douglas' venture into pizzas. The joint is casual and small. There are no reservations, but you can put your name on a list and they'll call you when your table is ready.

We arrived at about 5:30 and waited about half an hour for our table. There was quite a lot to explore nearby, so we didn't mind the wait.

Inside, we were seated at a tall, small table with bar stools. The menu was very simple, with only a few appetizers, pies and desserts to choose from. 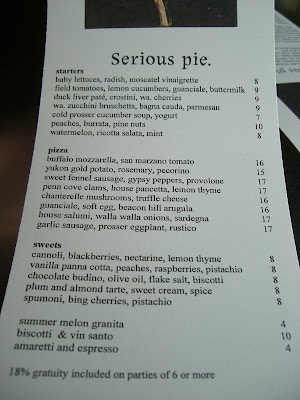 I chose the chanterelle mushroom with truffle cheese.

Surprisingly, there was no bread served with our meal. It made it a little awkward because the pizza did take a while to arrive. From my seat, I could see the pizza dough being spun until it was very, very thin.

When our pies arrived, I was starving. The pizza crust is very thin and crispy. Towards the center, it tastes more like a cracker rather than pizza dough. I loved the taste of the truffle cheese on my pizza and could eat this cheese all day long. The pizza was good too, though some parts of the crust was too thin for my liking. 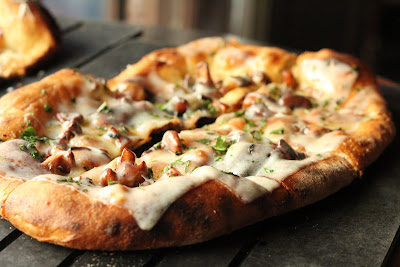 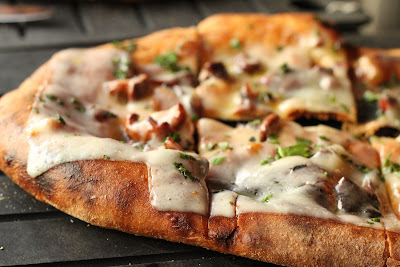 Boyfriend chose to order the house salumi pizza. This pizza had a bite to it that was a refreshing change of taste from the truffle cheese and mushrooms. BF and I both enjoyed the pizzas but we weren't blown away by them. 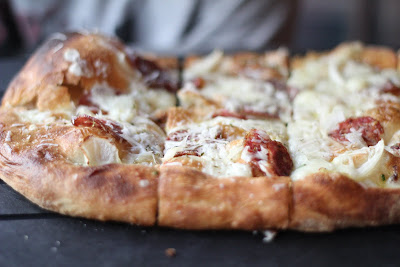 It was a good way to spend our first meal, but I left feeling slightly underwhelmed after hearing so much hype.