Shanghai No. 1, which created much buzz for the large amount of money spent on its decor, had been on my to-do list for quite a while, after I heard good things about the pan fried dumplings (sheng jian bao). During a recent LA food crawl, we met up with our LA friends for dim sum.

The inside of the restaurant is indeed impressive looking with the large chandeliers, rhinestone studded chairs, and velvet walls. Surprisingly, there was no wait even though we arrived during the height of dim sum hour. According to our friends, there is rarely a wait here. Despite it’s fancy decor, the dim sum prices are still pretty reasonable: Small ($1.98), Medium ($2.98), Large ($3.98), Special ($4.98). There are also various special dishes you can order which have a higher range of prices. 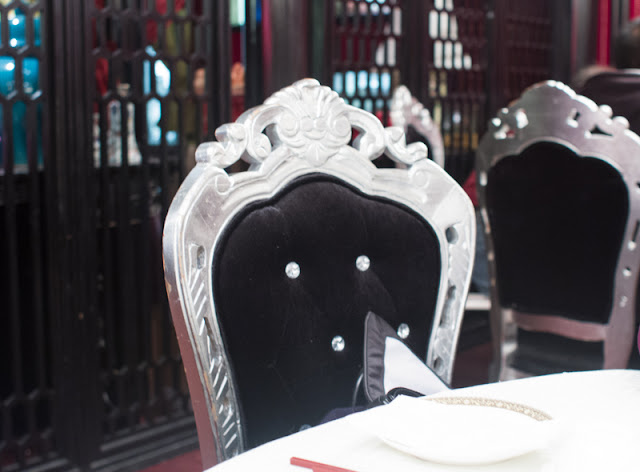 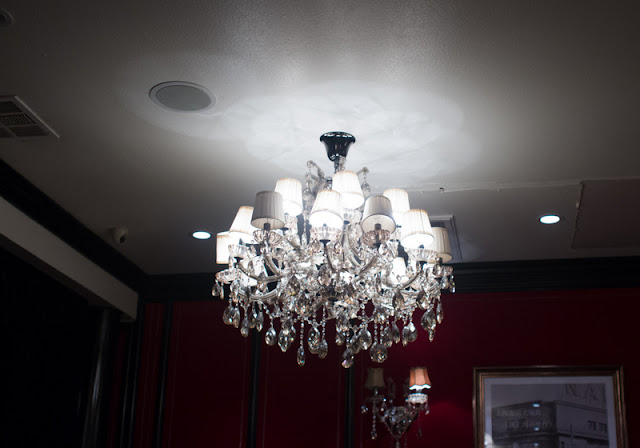 Because Mr. K and I were last to arrive (damn you, traffic!!), our friends had already ordered and we just went with their recommendations. Like most dim sum places in LA, there are no carts here. You order and the food is then brought out to you. 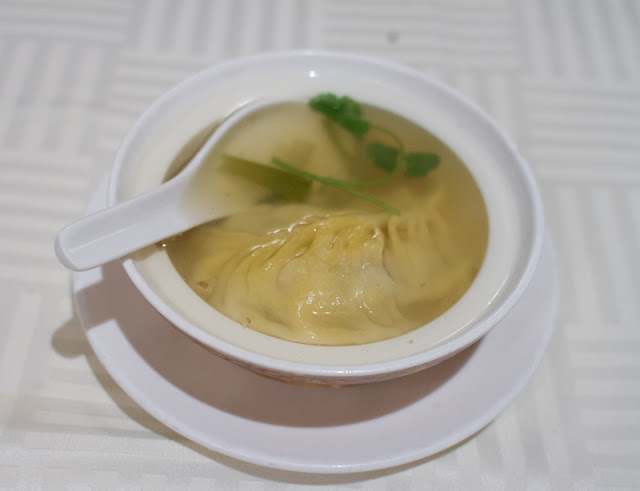 This was one of my favorites of what we ordered. The inside of the oversized dumpling is full of all sorts of savory seafood ingredients. 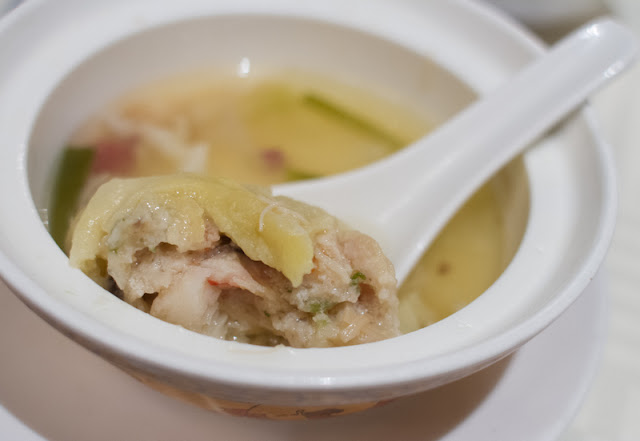 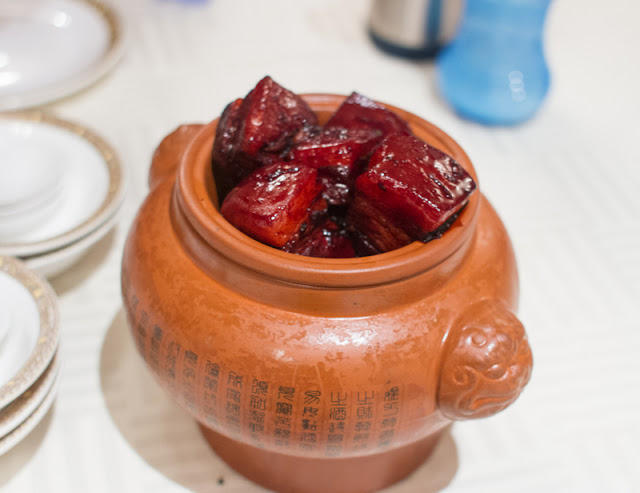 This was one of the specialty kitchen items not part of the regular dim sum. I love the clay pot it came in. 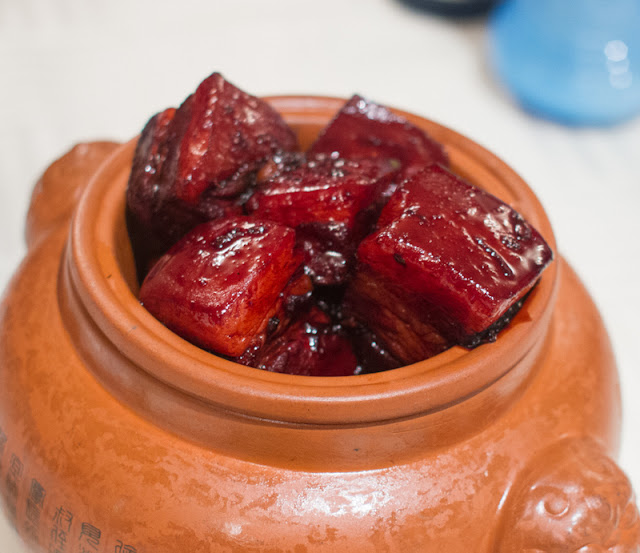 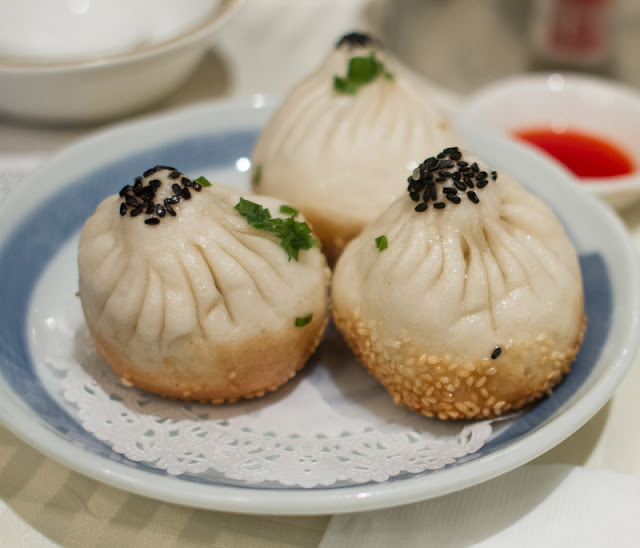 The famed pan fried dumplings. The bottom indeed had a crispy crust which was studded with sesame seeds. I’m personally not a fan of sesame seeds so I wish they had a version without it. Inside, there was a good amount of juicy soup with meat. I thought this was a pretty good rendition but not necessarily the best. 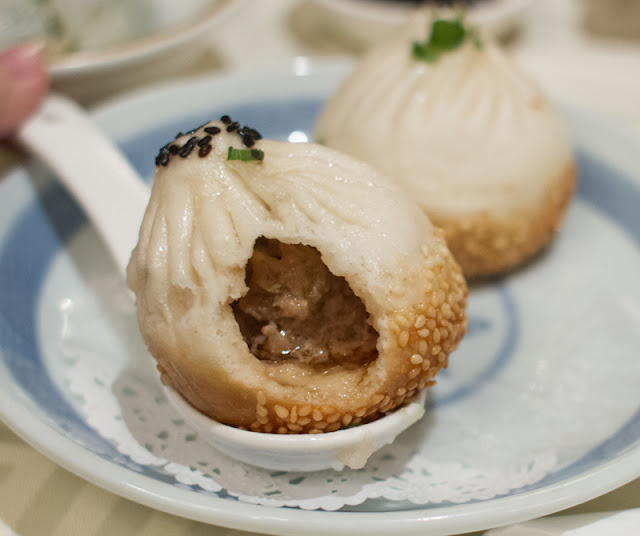 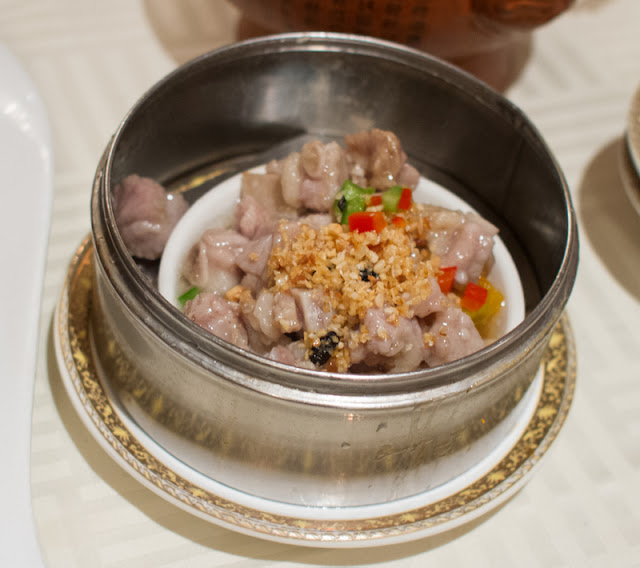 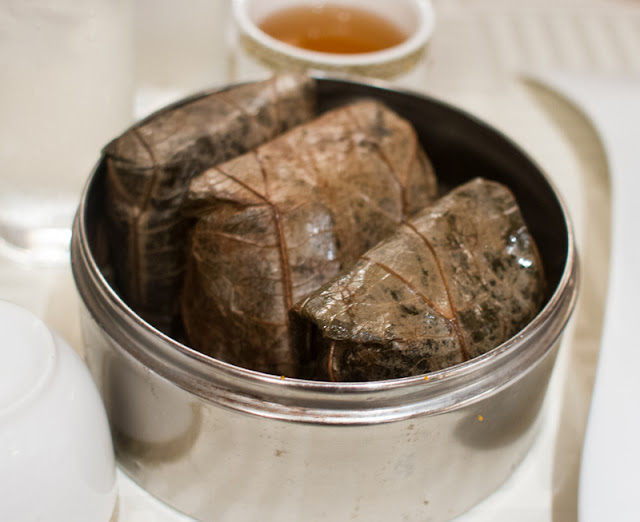 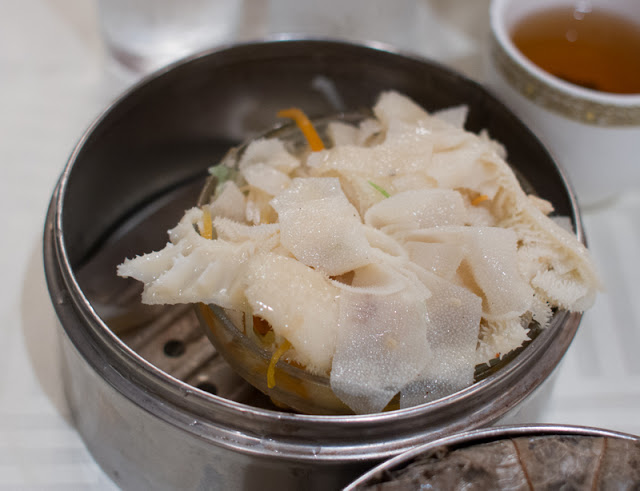 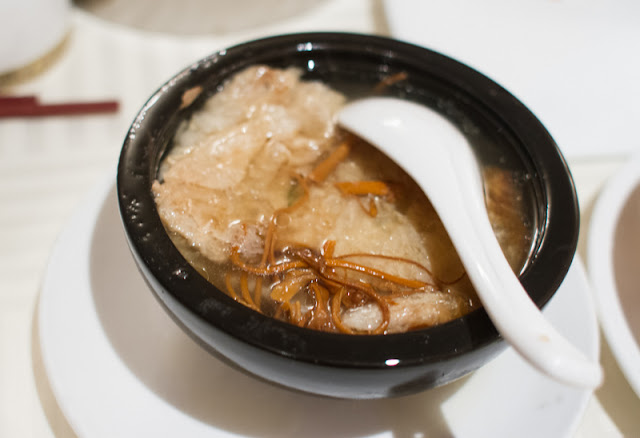 Another one of my favorites. I’ve always enjoyed the steamed bean curd roll dish at dim sum spots, but this was the first time I’ve had a soup version and I really enjoyed it. 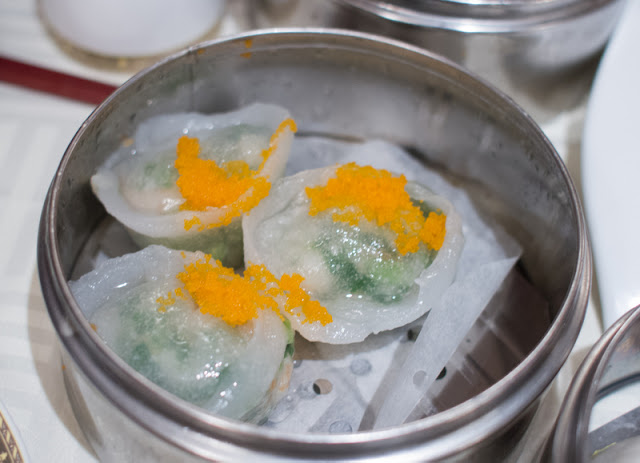 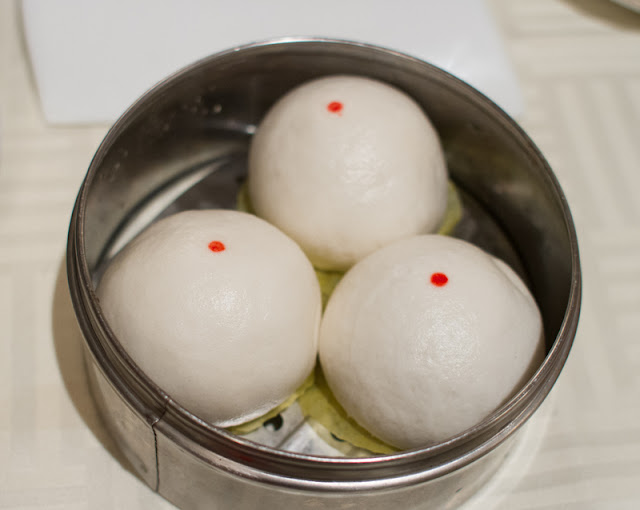 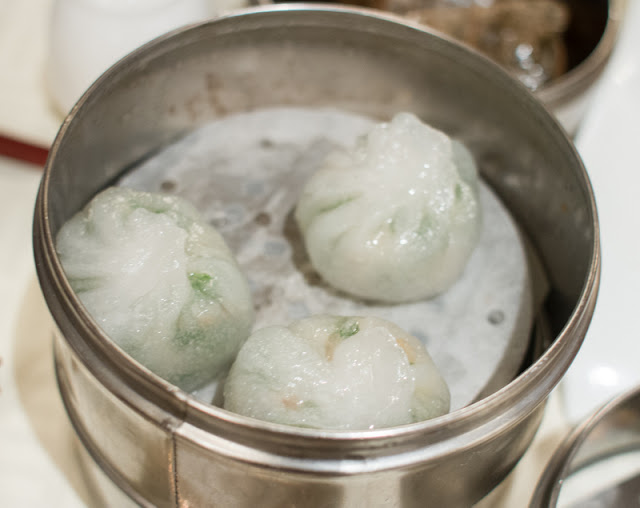 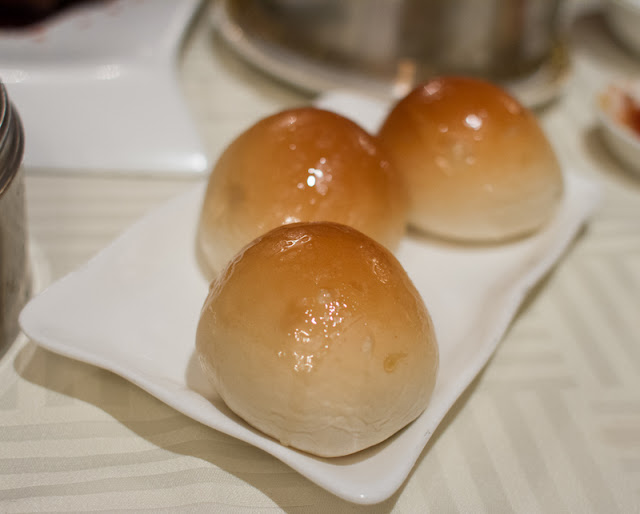 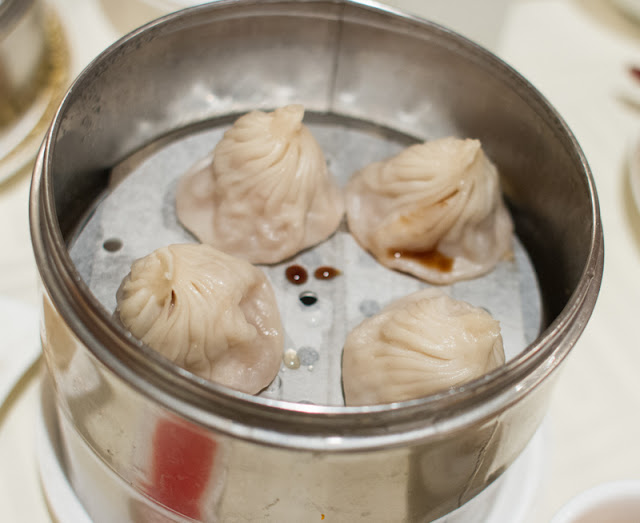 We ordered two of these so they must have been pretty good, though I can no longer recall specifics. 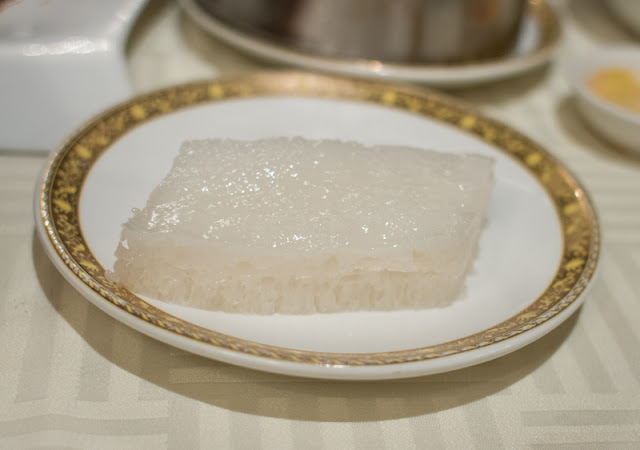 There was actually 3 pieces on the plate. We hadn’t ordered this originally and they had servers walking around with trays passing it out towards the end of our meal so we got one. I wasn’t going to document it which is why you don’t have the full 3 piece in the photo, but after I tasted it, I changed my mind. Steamed rice cake is one of my favorite desserts. It’s definitely an acquired taste, and I’ve learned it’s usually only something you like if you grew up eating it, which I did. I once looked up how to make it and it’s quite a long process so I decided it wasn’t worth it.

Anyhow, most dim sum places offer this as dessert but usually out of the three pieces, only one has a good rise, while the other pieces are the end parts of the batch that didn’t rise properly and don’t taste nearly as good. The steamed rice cake here was the best I’ve had. All the pieces had formed and risen properly.

Overall, I thought the food here was solid, but it didn’t match up to my favorite dim sum places in the San Gabriel Valley so I doubt I’ll be back.

One note, it’s located in the upstairs section of the plaza. I wasn’t able to take a picture since we went into underground parking.

For another take on the dim sum here, check out Kirk’s post.

P.S. I didn’t take the best pictures of food on this trip because I was distracted by my need to take photos of Catty Critic’s baby (I love snapping baby pictures). He sure is growing up fast. It seems like only yesterday we were at his first birthday. Now he’s walking, eating spicy tuna (I wish I had gotten that on my camera), throwing goldfish cracker tantrums in restaurants, and stealing dumplings off his mom’s plate. He also seems to really love the camera now whereas he used to stare at me suspiciously. This time, he was totally playing up for the camera, biting into a giraffe toy and then shaking his head side to side with the terrified giraffe in his mouth. 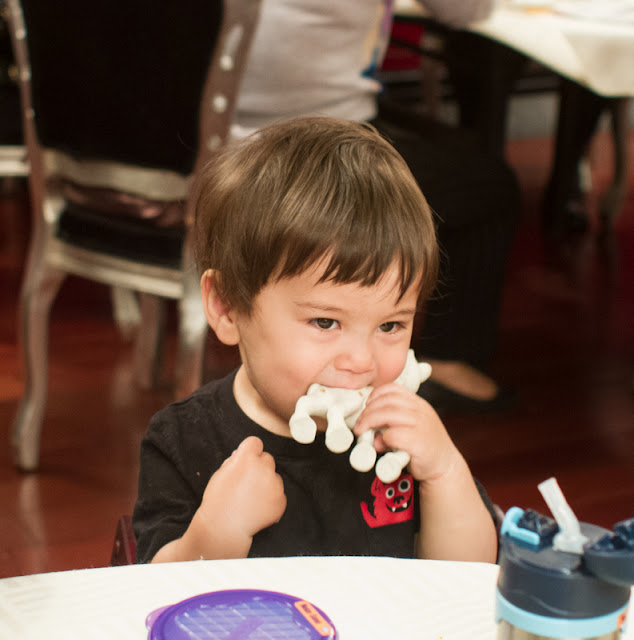 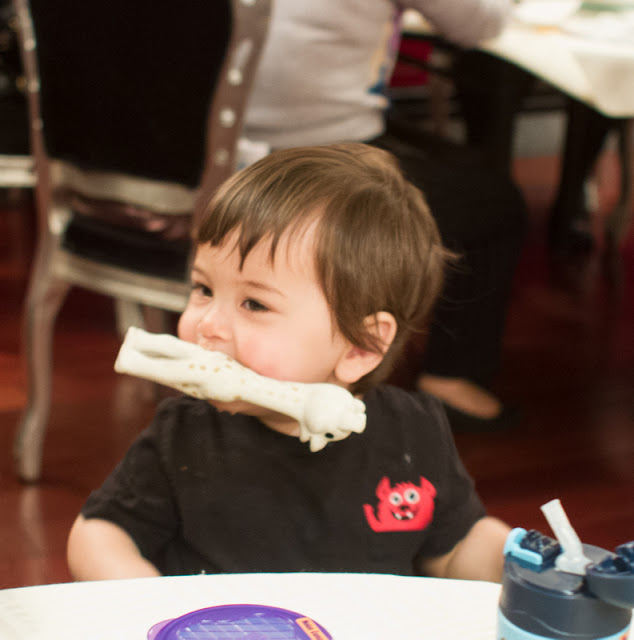 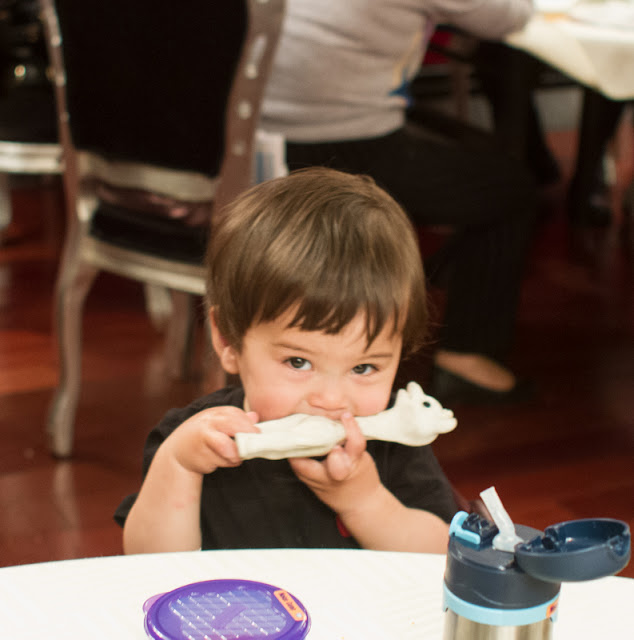 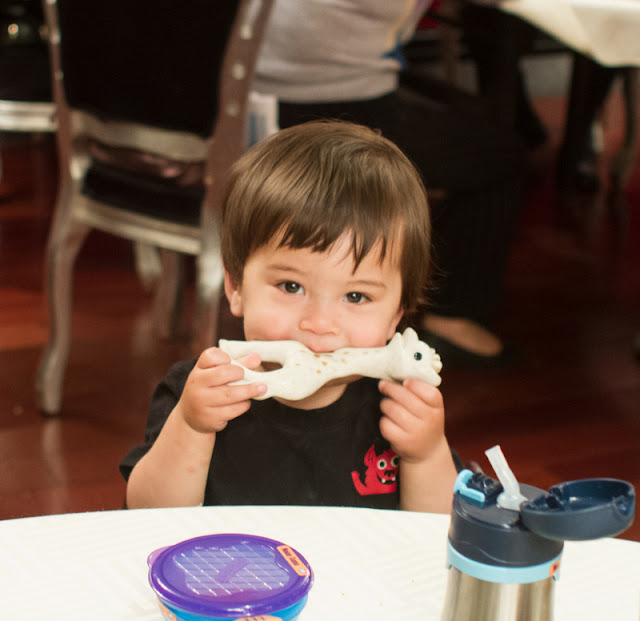