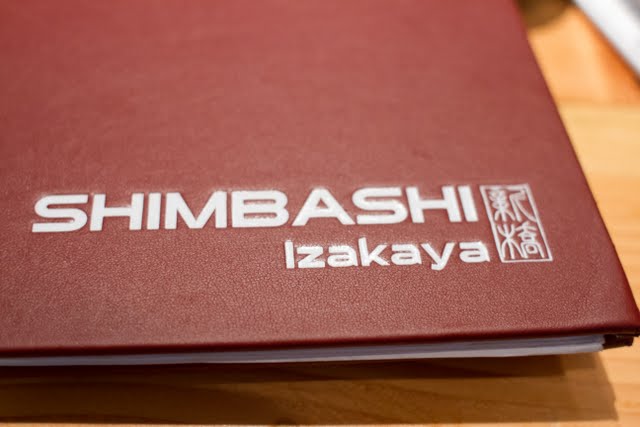 Shimbashi Izakaya is a Japanese restaurant located in the Del Mar Plaza. It’s now the fifth restaurant I’ve dined at in this plaza. After this last dining experience, I’ve decided to try to dine at them all at some point.

I originally snapped a picture  of the restaurant exterior with a peek of the ocean on the horizons, but I accidentally deleted it while clearing my memory card for space. So you’re stuck with a picture of the menu instead.

Speaking of the menu, as you can see by the picture, the menu here is extensive. The menu was more like a book. Shimbashi offers a wide variety of Japanese dishes ranging from sushi to small plates to hot pot. They also specialize in sake and there were about 4-5 pages of the menu just devoted to sake. I took the time to take pictures of the entire menu, but then realized that the full menu is online as well with pictures and prices. You can view it here. 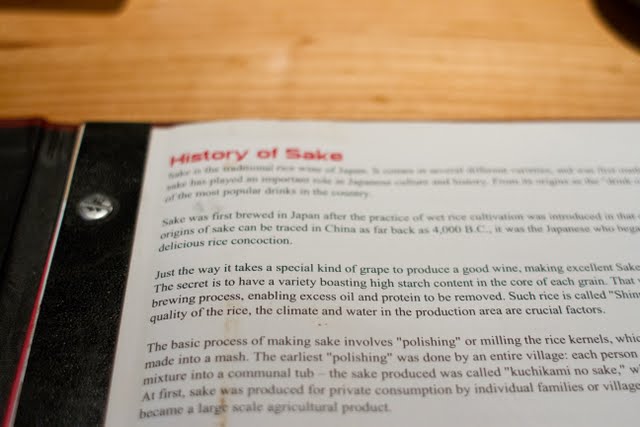 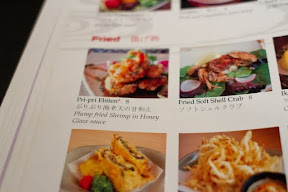 The restaurant is owned by an engineer who is originally from Tokyo, in the Shimbashi district. After moving to San Diego, he missed the cuisine of his home, so he decided to open a restaurant in San Diego. According to the menu “Shim” means “New,” and “bashi” means “Bridge.” 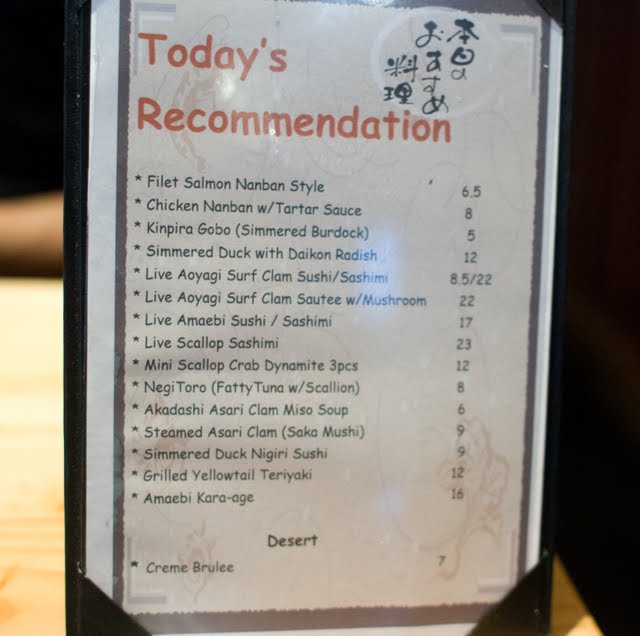 There are pictures of almost every item on their menu. We tried to stick to items that had asterisks, which meant that they were recommended by the restaurant. We also ordered a few dishes from the daily specials menu too. FH and I love eating seared kobe style beef and always order it when we see it on the menu. I was surprised to see that the meat slices here were very marbled. The abundance of tendons made this meat quite chewy. Not my favorite version of seared kobe-styled beef. 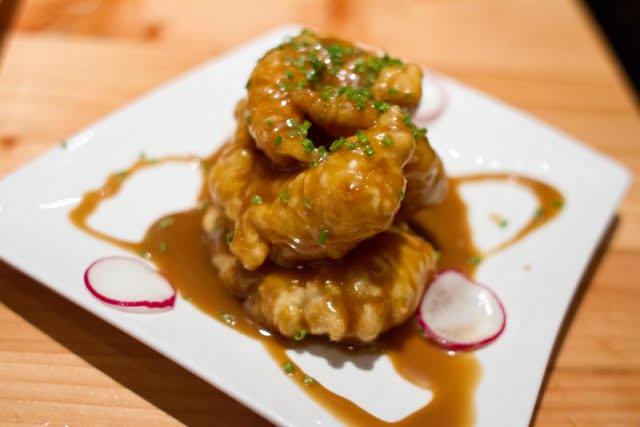 While this may not be the prettiest plate, it was quite delicious. I probably wouldn’t have thought to choose this dish if I hadn’t gotten a recommendation from Three Dog Kitchen. These were the largest shrimp I’ve ever seen. Usually fried shrimp at Japanese places consist of shrimp that are stretched out creating the effect of large shrimp, but these really were huge. I think technically they were prawns. Regardless, they were plump and juicy and I enjoyed them. For the price, I was impressed with the amount given. 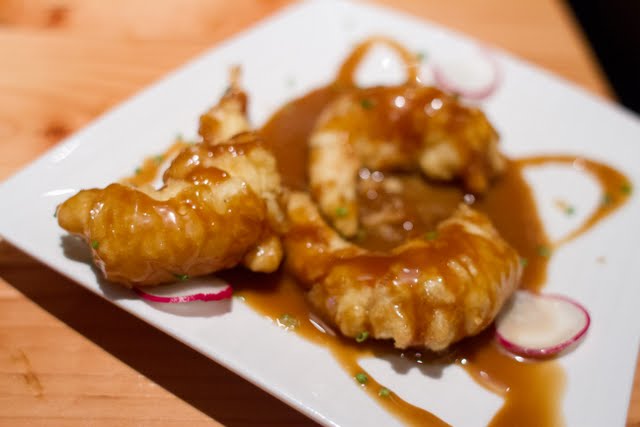 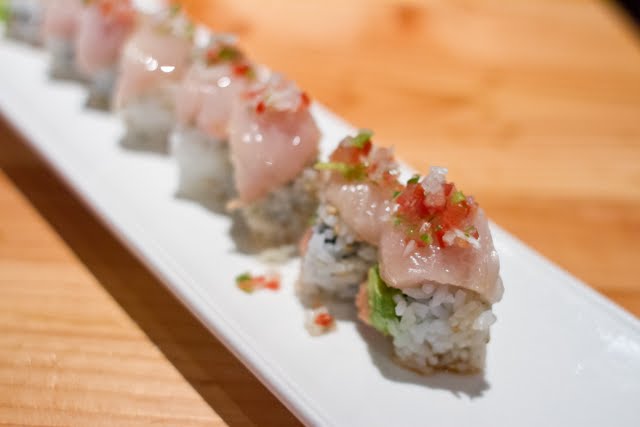 We tried to order toro, but there was none that night. Doh. So we ordered one of their most famous rolls instead. It was voted best roll at the Beer and Sake Festival . 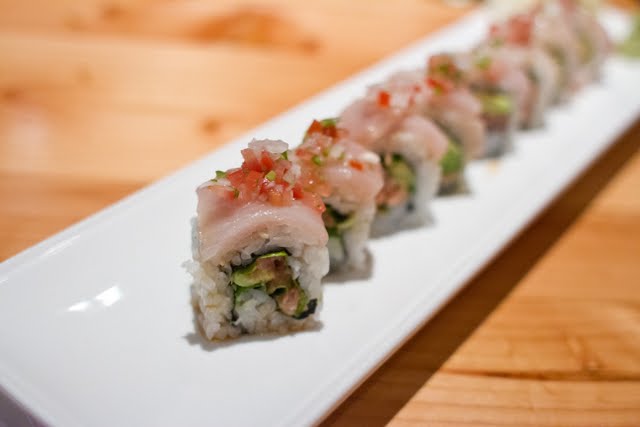 The yellowtail was very creamy. The cilantro, pico de gallo topping reminded me of a ceviche-style fish. 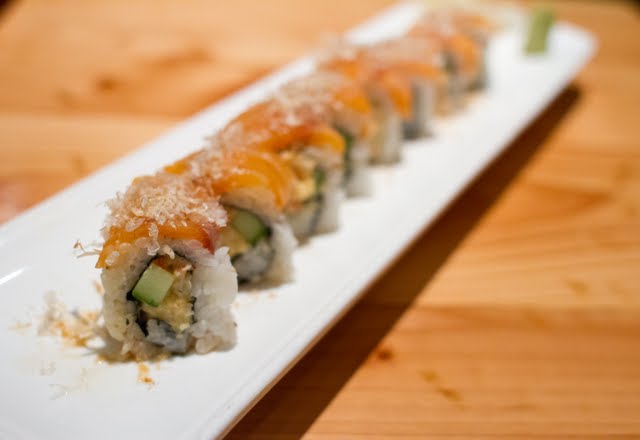 This menu item didn’t have an asterisk but the manager recommended it to us. I preferred this one over La Fresca, though FH preferred La Fresca. I liked the crunch of the masago, the spicy mayo, and bonito flakes just makes everything taste better. 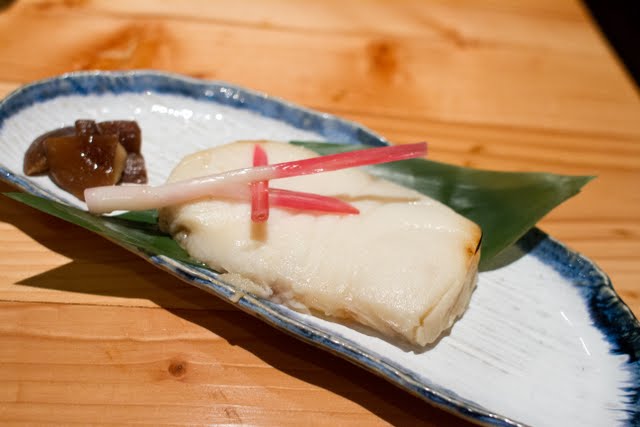 When the fish arrived, no steam was coming out. But as soon as I broke into it, the steam came pouring out. The fish was served piping hot and was accompanied with ice cold marinated mushrooms. I thought the pink pickled onions was an interesting touch. The fish had a slight sweetness to it from the miso glaze. Parts of it were a little salty, but the fish was very moist and tender. 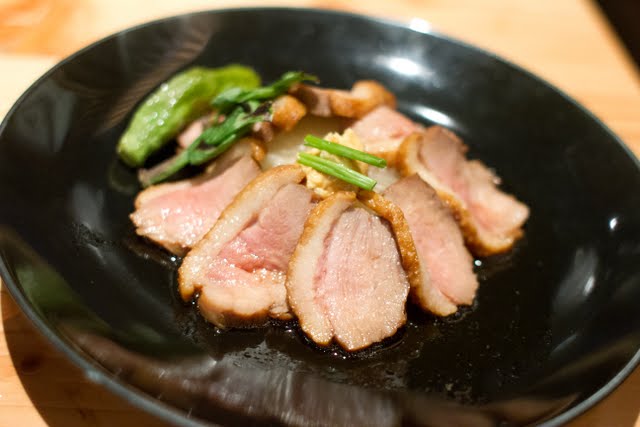 Thin slices of duck were simmered in a light daikon broth. The middle was a piece of daikon. It was topped with a dollop of wasabi which wasn’t green due to the simmering. Instead it turned an orange brown making it look like uni–but it’s definitely wasabi. (I learned the hard way…) 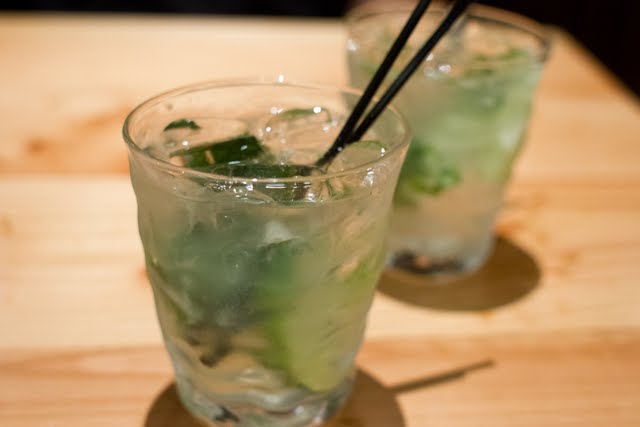 I’m usually not a mojito person but the manager suggested we try their mojito which contains shiso leaves. We opted to split one and they brought it out in two smaller glasses. The shiso taste was subtle but added a nice fragrance to the drink and helped detract from the mint taste I don’t particularly care for. 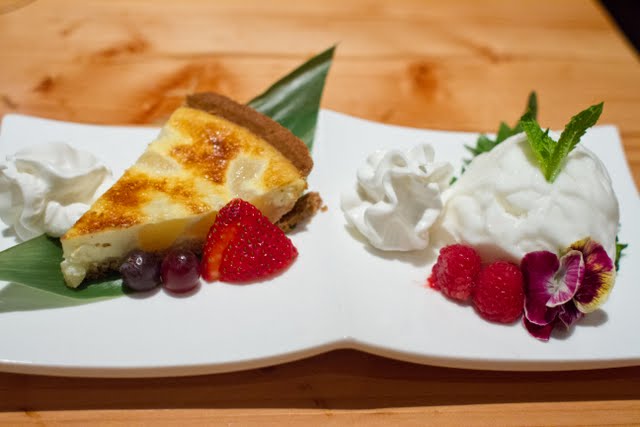 Before we left, the manager sent out this dessert to end our night.  I loved the pretty presentation and almost squealed with delight upon hearing the ice cream was a lychee sorbet as I adore lychee. The sorbet was delicious. The pie was very light and not too sweet. The base was actually an asian-style custard, studded with pieces of pear. 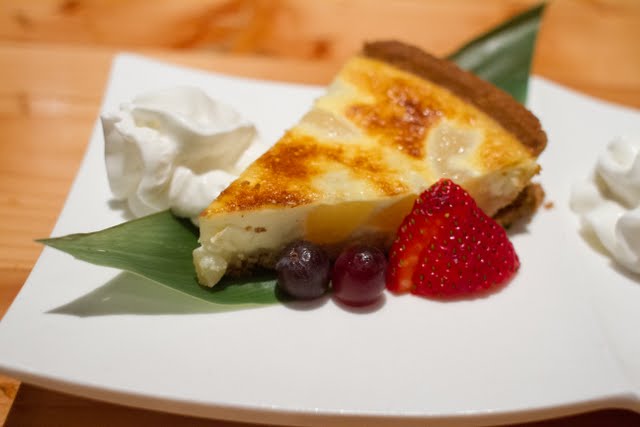 We had a fun time dining here. Despite all the dishes we only made a small dent into the extensive menu. The manager was super nice and generous.

Overall, I thought the food was a little on the pricey side, but it’s also on par with most of the restaurants located in this Del Mar plaza. On most nights out with the FH, we would probably go to Convoy to satisfy our Japanese food cravings, but I think Shimbashi is a good choice for dinner with a group of friends or when I have people visiting from out of town. With such a diverse menu, it’s great for a large group with different tastes and likes. In the summer, it is a nice place to dine outside, with the ocean just across the street.

Please note, our meal was complimentary. I was not compensated for this review and my opinions are my own.