Sinbala Cafe (frozen food to go and dining in)

Sinbala has become one of my favorite places to visit when Boyfriend and I go on an LA trip.  The fact that it is really close to Din Tai Fung (Boyfriend’s favorite), is a definite plus.  Sinbala offers Taiwanese style cafe food.  You can read my previous posts here and here.  This is one of the few places I’ve been to outside Taiwan offering Taiwanese street/snack food that I’ve left happy from.  (Normally, I leave so-called Taiwanese food places quite angry that they dare call what they served Taiwanese food)

The set up is similar to that of a Tapioca/boba shop, but the food is much better than your typical Tapioca tea shop as evidenced by the patrons that dine there.  At boba shops the crowd tends to be much younger, but at Sinbala you’ll see a lot more families, middle aged people dining there as well.  And while the staff is pretty young, they aren’t the uncaring minimum wage college students.  The staff is really mature, friendly, responsive, polite.

Sinbala is a bit small, so if you want to dine there, the wait can be quite long.  As a result, Boyfriend and I have been getting food to go on our last few trips.  However, on New Year’s Eve, the place was so empty, so after picking up my large order of stuff to go, we decided to grab some dessert after our meal at Din Tai Fung.

First, the food to go.  Recently I found out that Sinbala sells frozen uncooked dumplings too! 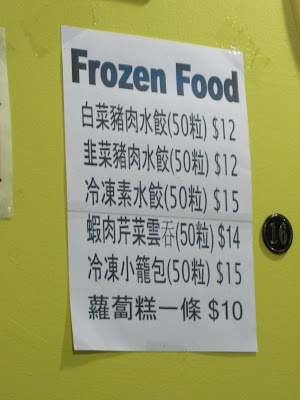 So I got some frozen pork cabbage dumplings.  The dumplings are really big and inside there is a good amount of filling.  Here are some not-so-great shots of the dumplings after I cooked some. 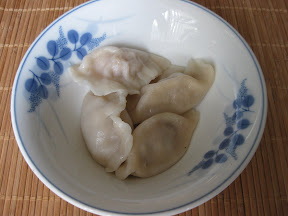 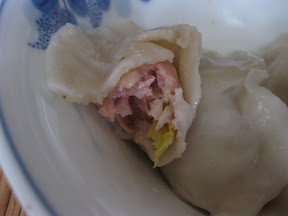 Sinbala also offers some other uncooked goodies that you can bring home, such as their famous chinese sausages, their taiwanese meatballs, and herb cakes!  I nearly swooned when I saw the herb cakes.  Herb cakes (pronounced ai cao gao), is like a savory mochi pancake.  It’s round and flat like a pancake, green in color, and inside there may be meat, bamboo, etc.  The green dough is super sticky like mochi. I thought I had taken a picture of one before eating it, but it appears I forgot..

On my last trip to Taiwan, on the last day before we left, my mom got up early and walked around and bought a bunch of stuff, including these ai cao gao.  I’d never had them before, and she gave me some to bring back to SD.  After I heated one up, I absolutely loved how it tasted (no surprise since I love all chewy mochi like foods).  Of course, I couldn’t find them anywhere.  And had I known about them sooner, I would have brought a bunch back!  So when I found them here at Sinbala (they aren’t on the menu, they are only on display in front of the cash register), I nearly wept with happiness.  They are easy to heat up.  You can microwave them, or put them on a frying pan.  It’s already cooked and just needs to be heated up so it’s nice and sticky and warm.

Now onto our dine in portion:

I love the cutesy decorations! 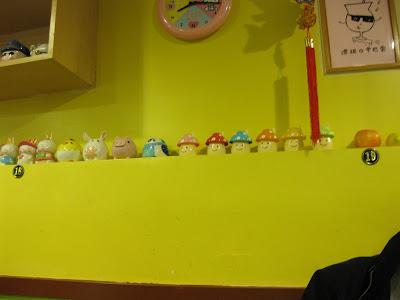 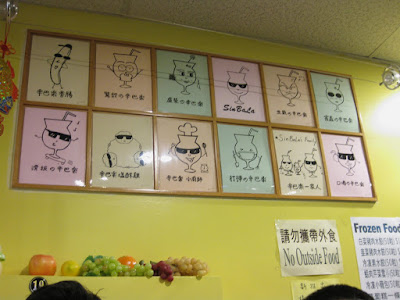 Each table is provided with small bottle of water and some paper cups. 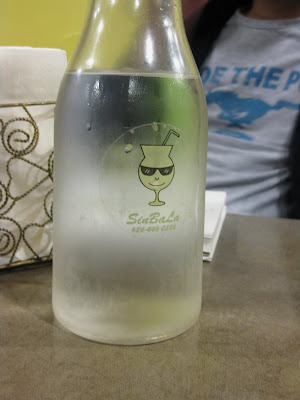 Of course we had to have an order of their famous chinese sausages.  The menu offers all sort of variations on their sausages…. sausage with kiwi sauce anyone?  I stuck to the basics.  We ordered a plate of sausages with garlic.  The large pieces of garlic add a nice kick to the sausages.  The sausages are really popular here and I found out that you can even buy uncooked ones to go.  So in my to go order, I had to buy a pack. 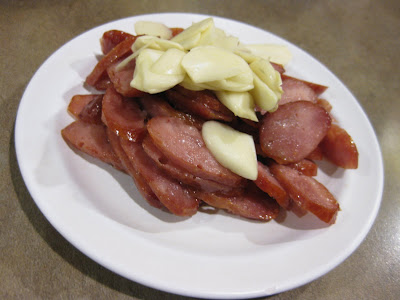 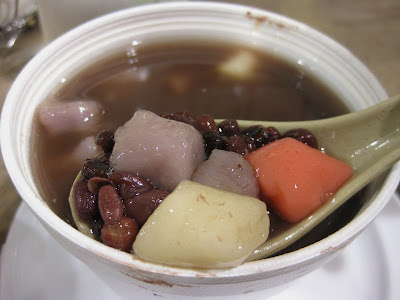 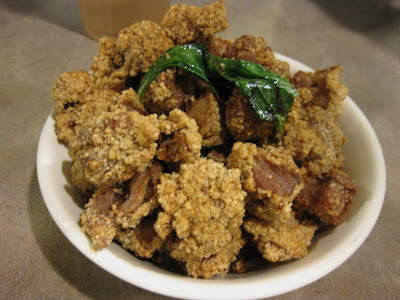 Of course I couldn’t resist order the shaved ice.  The most authentic shaved ice I’ve had outside of Taiwan.  For $5 you can either get 8 items (preset), or you can choose 5 of your own items.  Normally we get the 8 item one, but Little Bro complained that he didn’t like one of the toppings, so this time we chose to do the five item one.  I didn’t realize, but the 5 item one, you need to order the condensed milk as a topping.  Normally when I order the 8 item one, it’s part of it already. 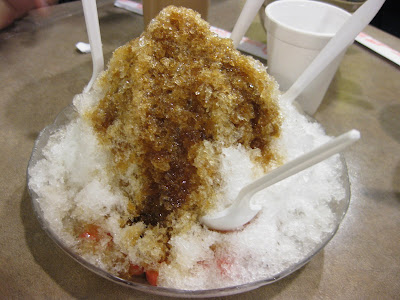 The toppings are buried at the bottom.  We got sweet rice balls, taro balls, red bean, coconut jelly, and I forgot what else. It’s a good amount dessert for 4-5 people to share. 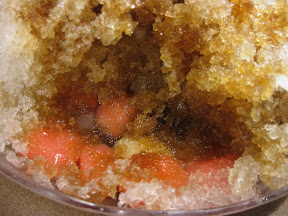 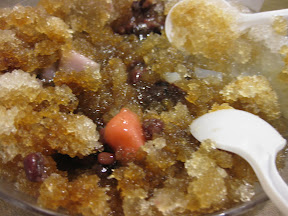 It had been so long since we’d been able to dine in. There were so many items I wanted to try out like their beef noodle soup, rice dishes, other noodle dishes…but this was the last stop on our LA eating excursion so we didn’t really have room for all those items.  Oh well, next time! 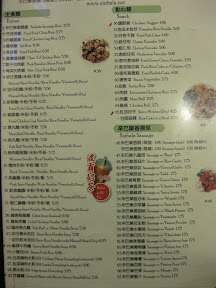