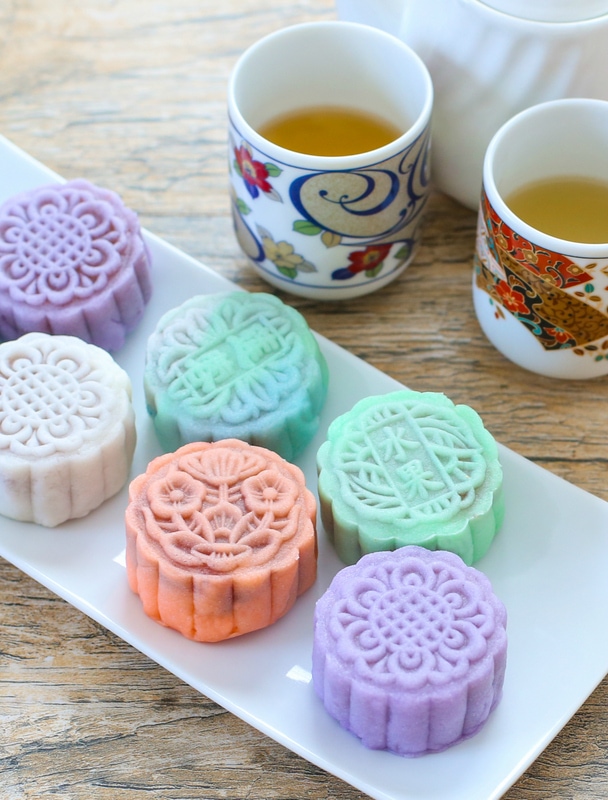 It’s almost that time of year again. Mid-Autumn Festival or Moon Festival will be on September 8, 2014. One of the main ways it is celebrated is by eating mooncakes. In anticipation of the upcoming holiday, I made snow skin mooncakes, a no-bake mooncake made with roasted glutinous rice flour.

Traditional mooncakes have a pastry shell, and a sweet filling. Some of the common fillings include red bean, lotus paste, and jujube paste. Occasionally, they also have a salted duck egg yolk in the center. They are usually gifted to friends and family this time of year, and are eaten during the Mid-Autumn Festival while gazing at the full moon. Because they are so rich and sweet, they are eaten in small wedges, accompanied by hot tea. 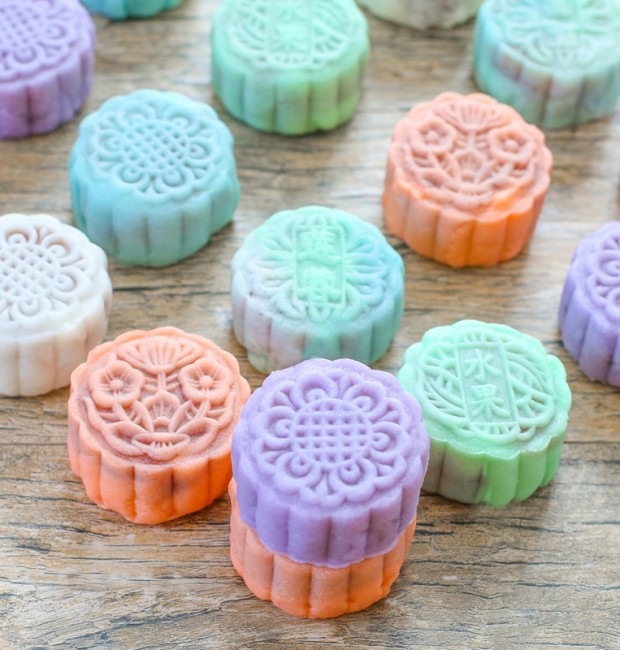 Snow Skin Mooncakes became popular a few years ago. In modern times, there has been a trend towards creating healthier mooncakes. You’ll often find fruit fillings, or crusts made out of agar jelly or other material. Snow Skin Mooncakes are made out of roasted glutinous rice flour. The texture is somewhat similar to mochi, but much softer. They are usually white, hence the name, but are also made into other colors for aesthetic purposes and to denote flavors. 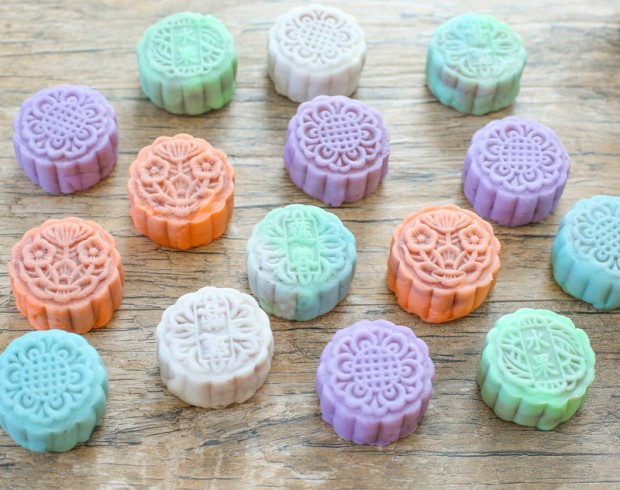 I love making snow skin mooncakes because I can make different colors and because they are a no-bake mooncake. There’s a few basic ingredients you’ll need: packages of roasted glutinous rice flour (which are sold in Vietnamese markets), shortening, powdered sugar, and filling (I use pre-made ones purchased at Ranch 99). You can, of course, make your own filling. And if you can’t find roasted glutinous rice flour, you can refer to my first attempt where I made my own roasted glutinous rice flour. Though, if you can buy it, I recommend that. It’s much easier and the skin consistency is also easier to work with for the pre-packaged flour compared to homemade.

You also need mooncake molds, which can be purchased on Ebay or Amazon. 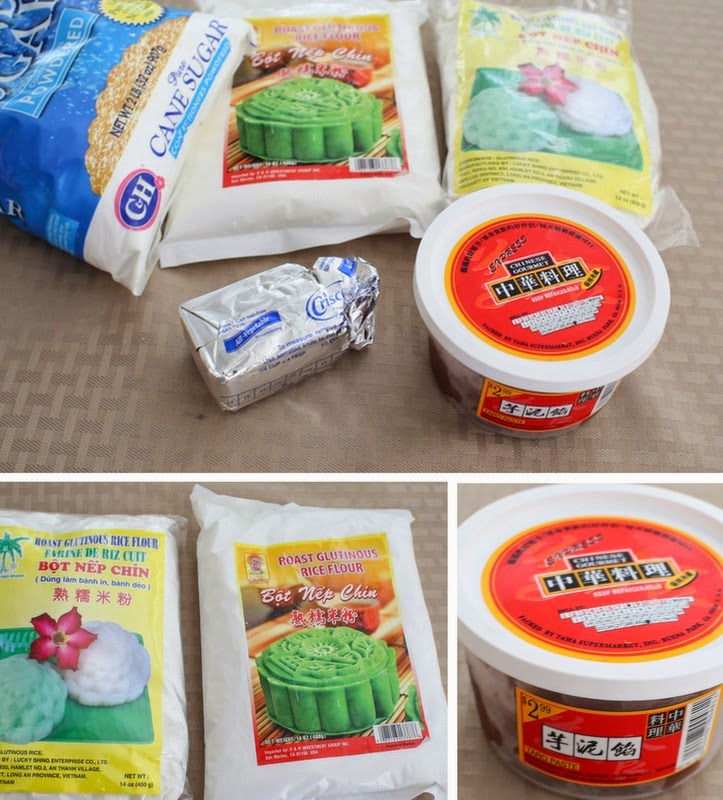 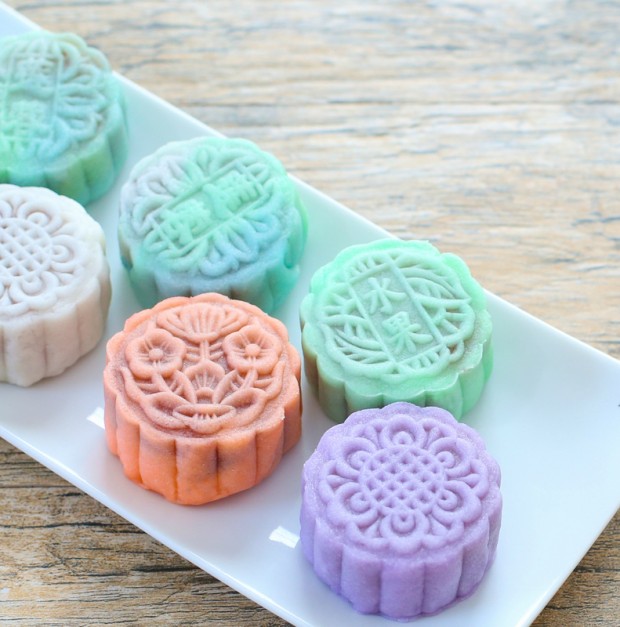 Last year, I documented my results including step-by-step photos. This year, I’ve been working on smoothing the bottom edges and making multi-colored ones. I just bought a few more different styles and sizes of mooncake molds recently but they haven’t come in the mail yet. Hopefully, I’ll get a chance to play around with them before Moon Festival. 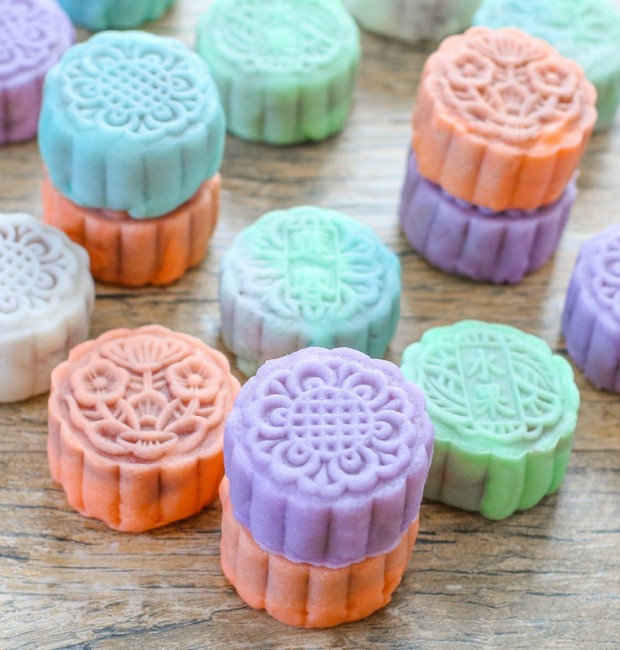 For my snow skin mooncake recipe that involves making your own roasted glutinous rice, see here.