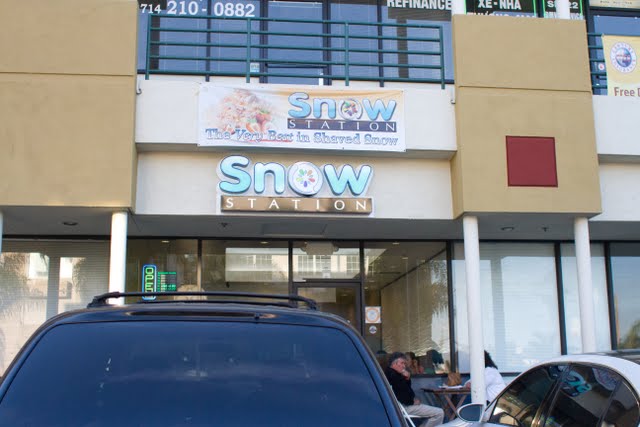 DH and I were in the Orange County area this weekend taking care of some errands and we stumbled upon Snow Station, which claims to make the very best snow shaved ice. Bold claims. So in we went to check it out for ourselves. 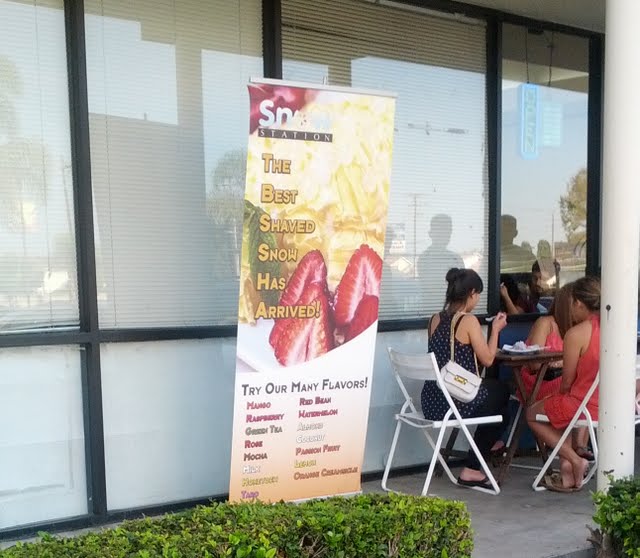 Snow Station follows in the trend of new snow ice places that have popped up, using the popular frozen yogurt concept with snow ice by offering more variety of flavors and using frozen yogurt toppings like prepackaged mini mochi and jellies. 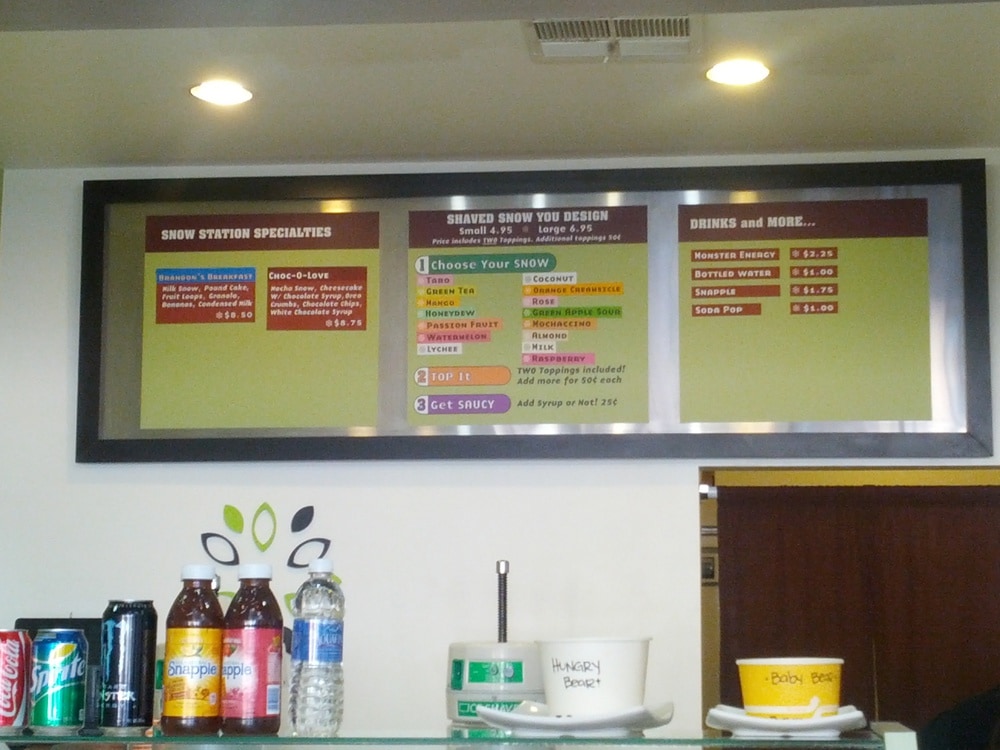 We decided to each get a small, which comes with two toppings. 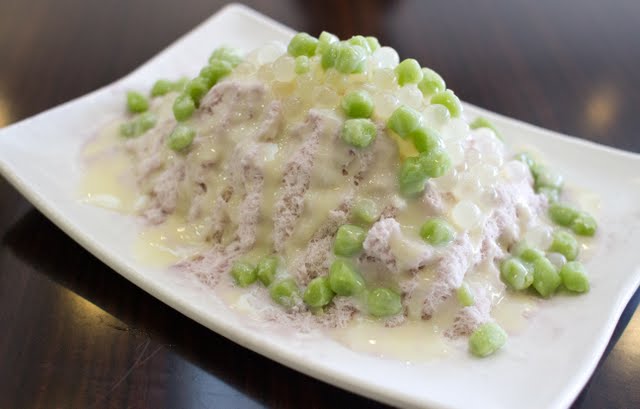 One thing I do like about these new snow ice shops is that you can get more nontraditional flavors like taro.

Let’s start with the good. The snow doesn’t ribbon like traditional Taiwanese snow ice does, which is interesting because in their photo they show ribbon layered snow ice. Instead, the ice is in tiny pieces. However, even though it’s in tiny pieces (which usually is a sign it’s too icy), the snow here was actually super, super soft. It resembles a fresh snowfall in its presentation and is some of the softest snow ice I’ve ever tasted. So even though it doesn’t ribbon, I’d say this is the best snow ice I’ve had in terms of texture. 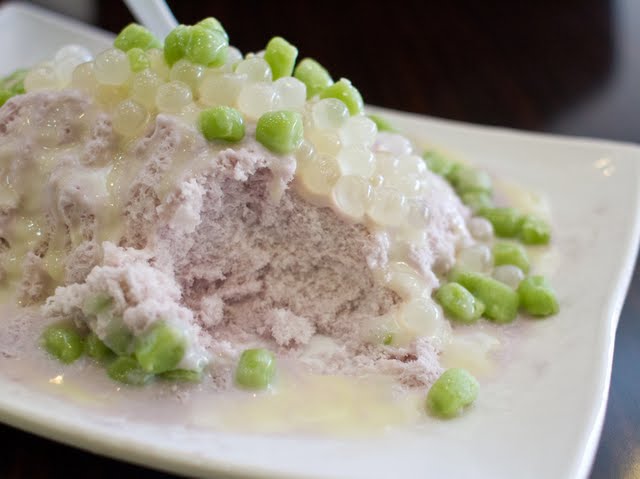 The bad: I had a hard time choosing toppings. Traditionally, snow ice is served with a choice of toppings like fresh fruit (mangoes are very popular), fresh made mochi, pudding, taro, red beans, green beans. I know some of the latter toppings aren’t as popular for those who did not grow up eating this stuff, but it would be nice if they offered some of the most popular traditional toppings (fresh fruit, fresh made mochi, pudding). I didn’t particularly care for the toppings offered. The only fresh fruit was strawberries and the pre-packaged mochi were extremely hard/stale.

The ice flavors were also a big problem. The taro one was pretty good. However, some of the other ones we tried were not. Some were so bad we couldn’t even finish the ice, which I don’t think has ever happened before until now. 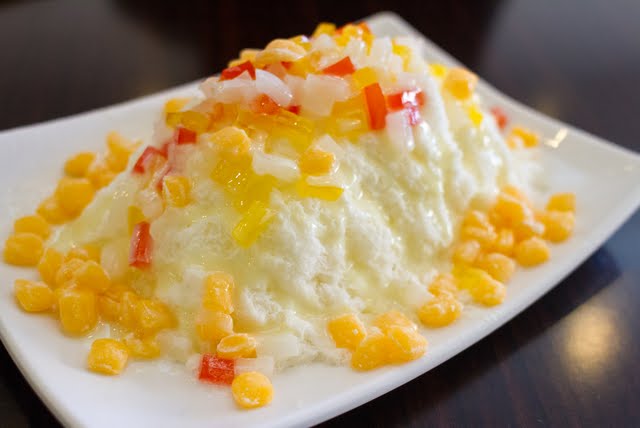 The almond snow ice is an example of bad flavors. I believe they used almond extract to create the almond flavor. But they used way too much and the ice ended tasting nothing like almonds. The strong alcohol taste was quite off-putting and we only ate about half before giving up.

DH also didn’t care for the toppings offered and was thinking of just getting the ice without any toppings.

Despite this miss, DH decided he wanted yet another shaved ice! (Proof I’m not the only crazy eater in this relationship.)

This time we got a large because you can get two flavors. 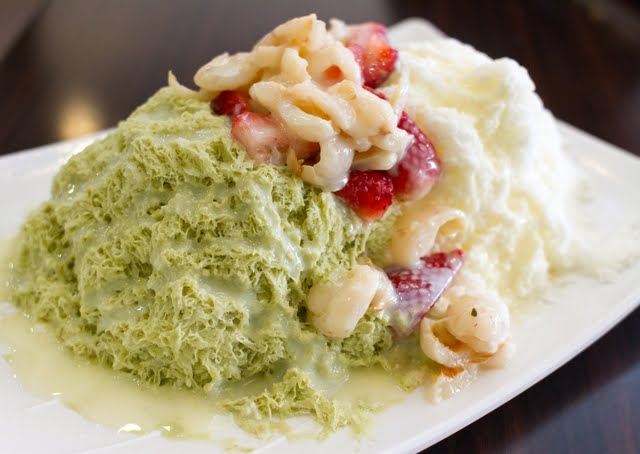 The green tea was much better, and was my favorite next to the taro.

As you might have guessed, we did not agree with the claims that Snow Station makes the best snow ice in town. I do believe they have the softest snow ice texture I’ve come across in the US, but the flavors are hit and miss and the misses are quite extreme misses. If it weren’t for the awful almond and milk snow ices, Snow Station might come in second or third on my list of favorite snow ice places, but it’s hard to forget the bad flavors. I’d also like to see toppings like fresh fruit rather than the prepackaged frozen yogurt toppings. That being said, it’s still better than anything we currently have in SD and if I am in the area again, I wouldn’t mind getting the taro or green tea.