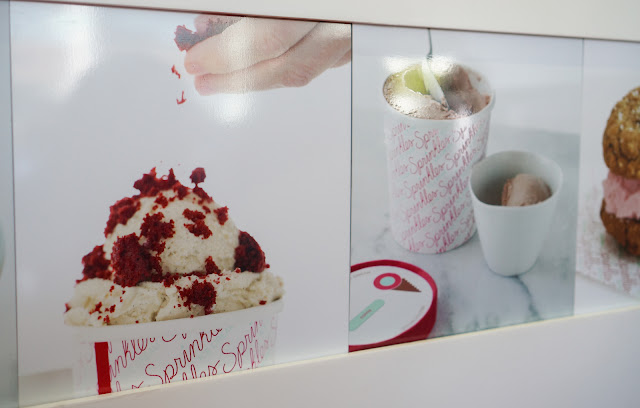 Because apparently cupcakes are not enough, Sprinkles has decided to venture into the ice cream making business. The first Sprinkles Ice Cream debuted in Beverly Hills, next door to its Sprinkles Cupcakes shop, and a second one just opened in Newport Beach.

At the San Diego cupcake store, there is no ice cream served, even though I constantly see little signs advertising the Sprinkles ice cream. I always find the sign annoying since they don’t actually carry any ice cream.

Anyhow, I was a little dubious about a Sprinkles Ice Cream. Los Angeles has so much good ice cream, would Sprinkles be as worthy of a competitor? Well after seeing how popular it’s been and the generally positive reviews, DH and I stopped in on our last Los Angeles road trip. 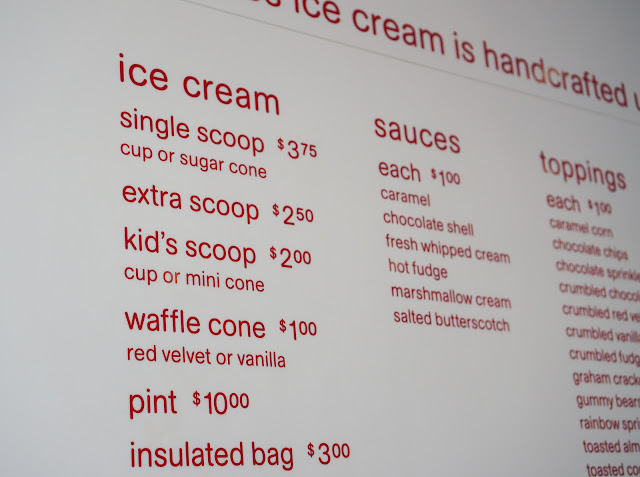 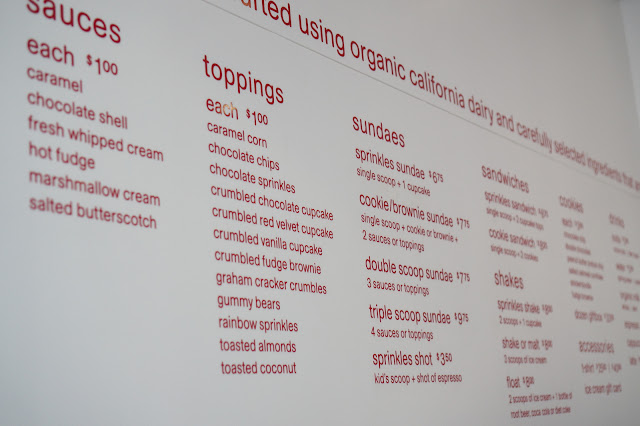 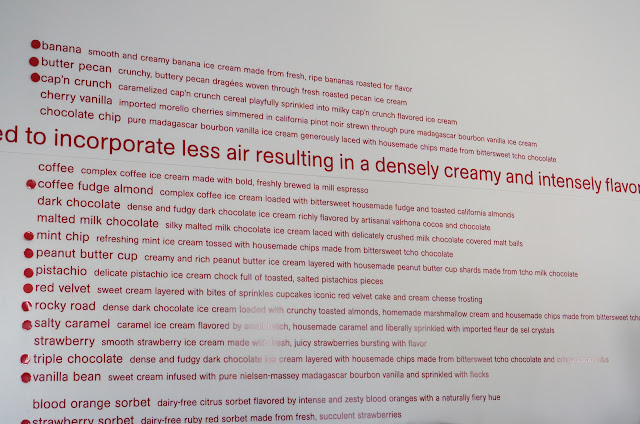 Luck was clearly on our side. The Beverly Hills area is notorious for traffic and sparse open parking spaces. Yet when we went, we found a spot right in front, with 50 minutes still in the meter! In addition, there was barely any line (only about 5 people in front of us) which I was surprised about because I’d read that there is constantly a long wait.

Well right after we got in line, people started to pile behind us. By the time we got our ice cream, the line was more than 20 people deep! We were definitely super lucky. 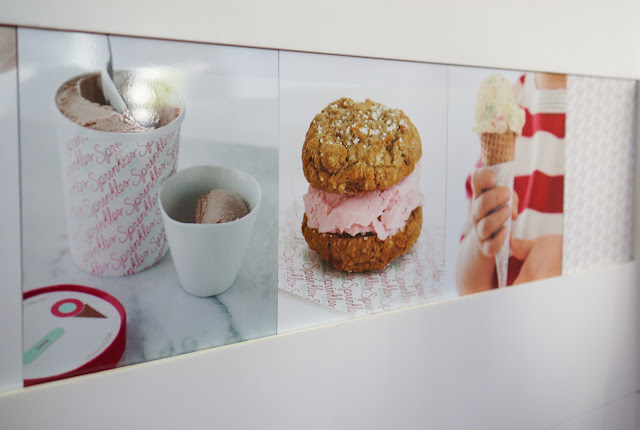 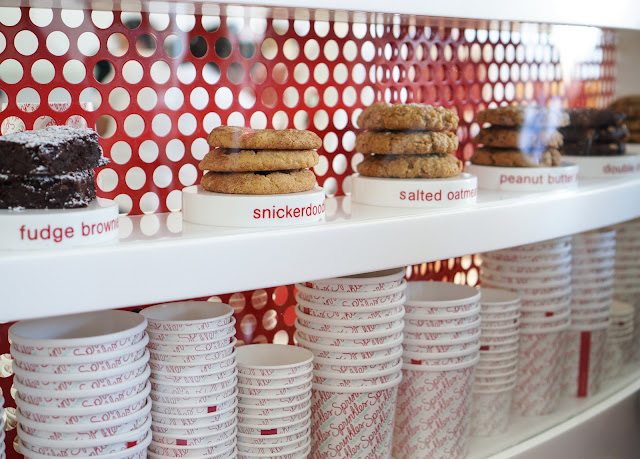 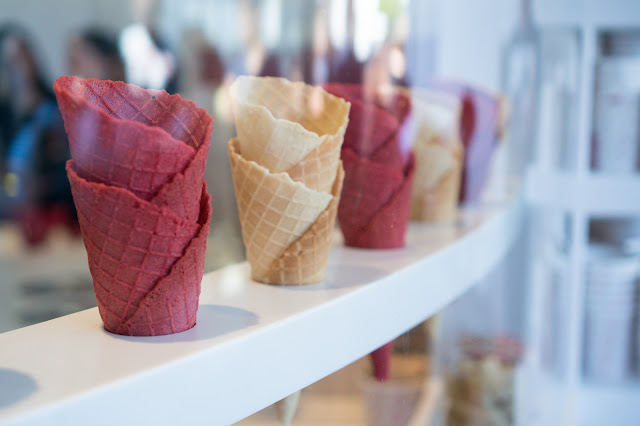 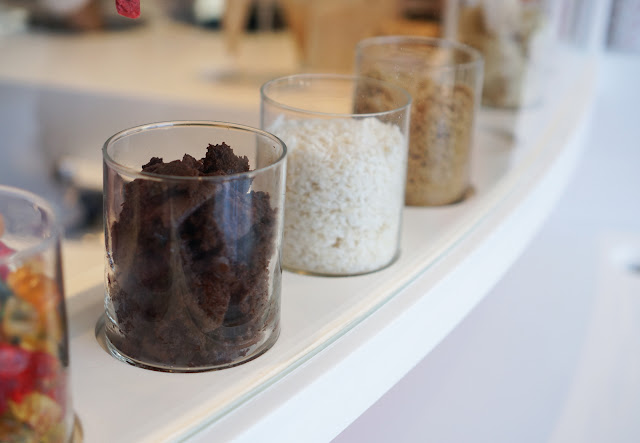 I really enjoyed the interior space. It’s shiny and sleek and full of mouth watering photographs. The white and red floors and walls also gives it a very clean feel. There are quite a few ice cream flavors to choose from, as well as toppings. You can also opt for a milkshake or other ice cream beverage. They also sell fresh baked cookies. 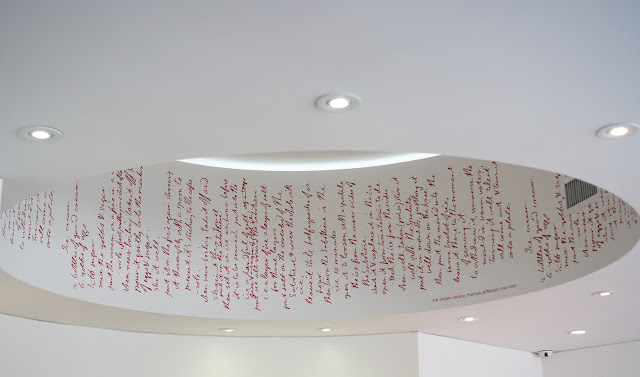 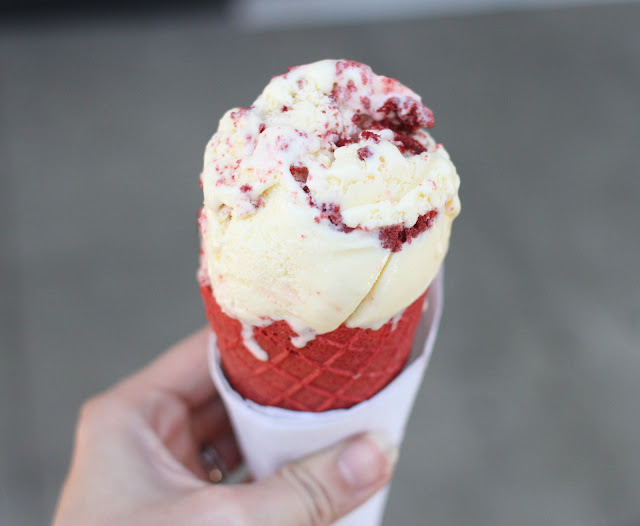 Since I am a fan of Sprinkle’s red velvet cake, I opted to try their red velvet ice cream. They have two cone choices: vanilla and red velvet. I definitely wanted to try red velvet since I’ve never tasted a red velvet cone before.

The cone was interesting. There was a hint of red velvet flavor, though it was also quite thin and delicate. It was sturdy enough to hold the ice cream but I didn’t like how easily it broke off when eating it. I wold have liked a thicker, crunchier cone. 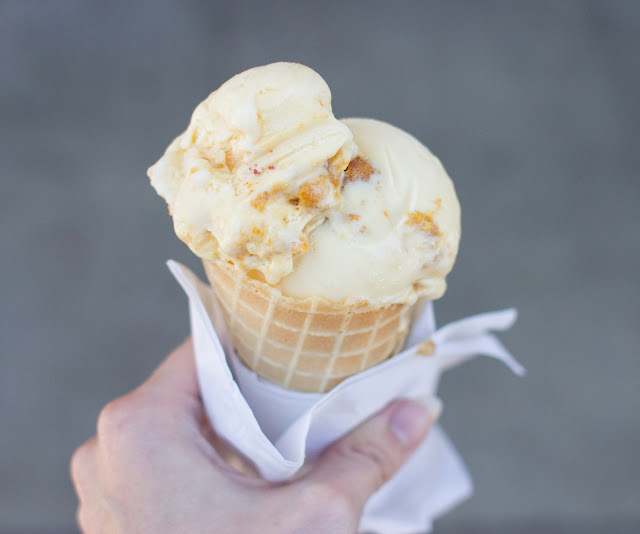 Cap’n Crunch is one of their most popular flavors. DH originally wanted it with the espresso drink, but their espresso machine was broken. So he got a cone instead. I forgot that I really dislike Cap’n Crunch until taking a bite. But it did indeed taste like the cereal except in ice cream form.

So how did I feel about the ice cream overall? I was a little disappointed. The ice cream was good but not worth waiting in line for. It didn’t particularly stand out for me and I happen to be a fan of Sprinkles Cupcakes. It was fun to try once, but next time I’ll go look for another ice cream place or revisit one of my favorites.

If you really have a burning desire to try Sprinkles Ice Cream and you are nowhere near Beverly Hills, they do ship their ice cream nationwide.