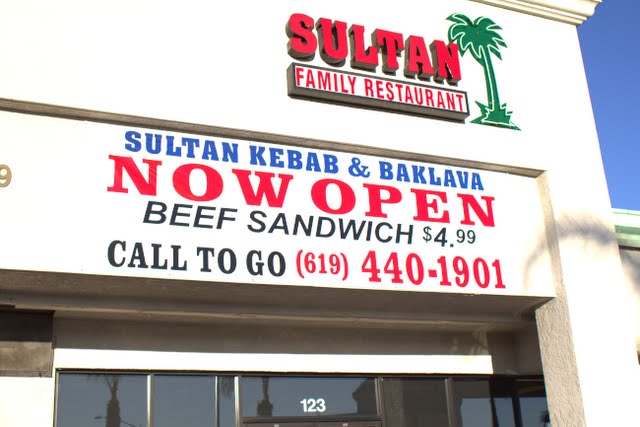 Sultan has been on my to-do list ever since I read several delicious posts on mmm-yoso. Unfortunately, some of my family members aren’t quite as adventurous when exploring other ethnic cuisines.

This past weekend, the siblings were off on a trip to Sin City, so FH and I took the opportunity to check out Sultan, a Turkish restaurant specializing in Kebabs and Baklava. We invited along our friend Steve, who is always up for trying anything.

When we first arrived, we thought the restaurant was closed because they have screens put over the front windows to block out the sun, which makes the place appear deserted and closed. We breathed a sigh of relief when we saw the “Open” sign since we had just driven a good distance to get there.

Once inside, the restaurant is divided into two main sections. One section is for dining in, the other section is for buying their famous baklavas and other desserts.

Once we were seated, we were presented with menus. You can also view the menu online.

The dining room is set in front of an open kitchen, allowing diners to watch the fresh breads being made and other foods being prepared.

Since it was our first time dining, we ordered quite a few items.

First, Steve started out with some strong Turkish coffee. 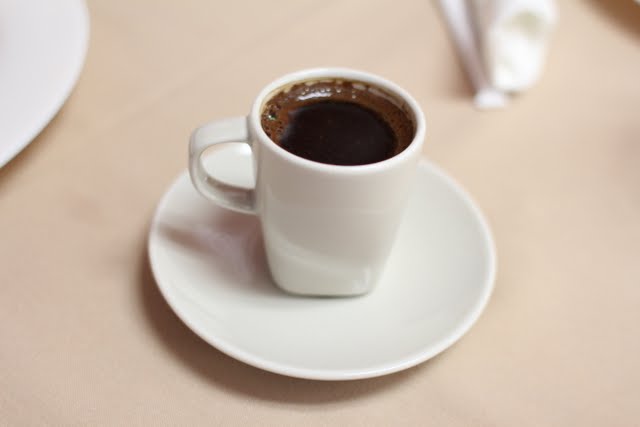 I ordered some Turkish tea, which happens to be free 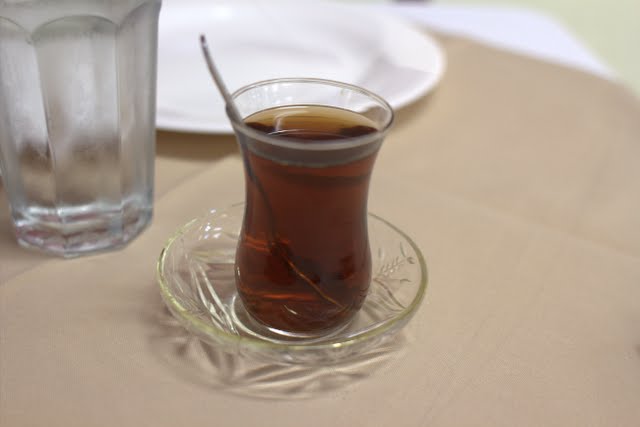 We ordered a few small appetizers to share. The appetizers were accompanied by their fresh baked lavas bread, a very thin, chewy bread that I absolutely adored. We used this bread to mop up the various pastes we ordered. 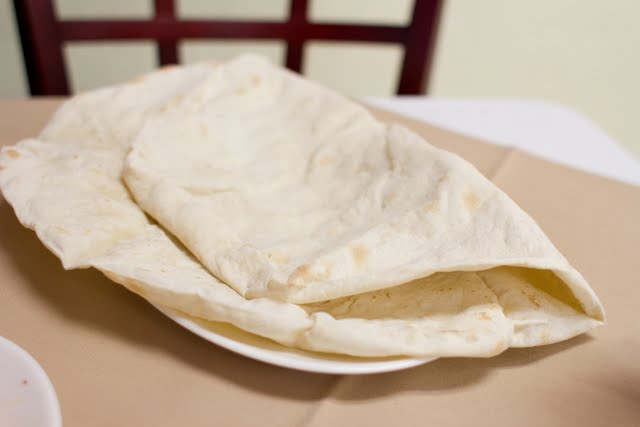 We ordered the antepezme (onion, hot pepper, tomato, chili powder), saksuka (potato, zucchini, eggplant, sweet pepper and tomatoes), and the hummus.  I liked them all but my favorite was the hummus. I could have eaten the whole plate of hummus and then some. 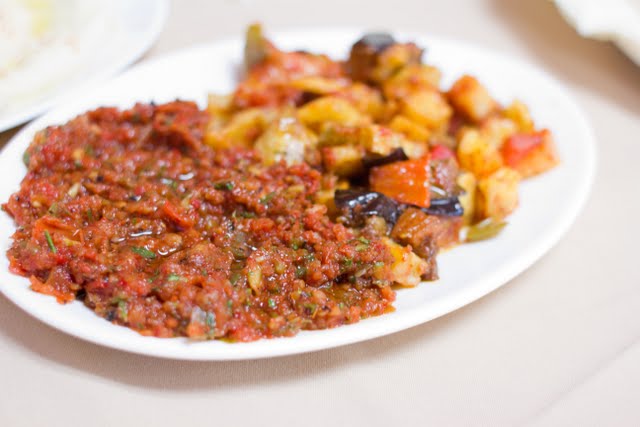 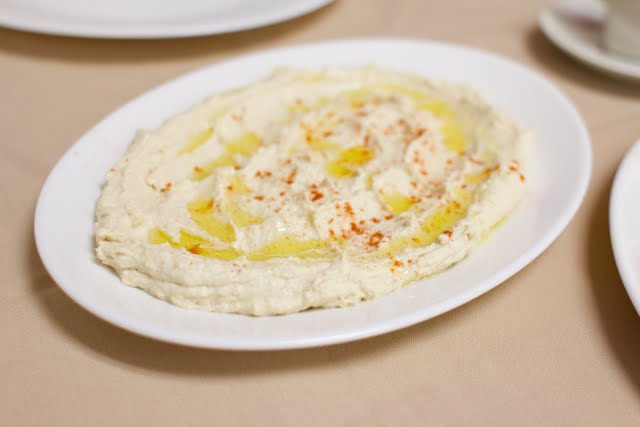 We were also curious about the pide, which is a Turkish style pizza baked on a thin crust bread. FH and I had previously experienced something similar at Alforon, but I was curious to see the difference here.

We chose to try the Karisik pide which had a few pieces of each of their different pide offerings. I enjoyed the pide immensely. Both FH and I thought this was better than the version we had at Alforon. The one with cheese and the one with the beef cubes tasted more like regular pizza, and the one with ground beef had more Turkish spices. I enjoyed all the different toppings.

By this time, we already knew we’d be back. We loved everything we had eaten and we hadn’t even gotten our main entrees yet! Our server was wonderful too. She was attentive, patient, and answered all of our questions.

For our main entree, we each ordered a different kebab. FH chose the adana kebab, which is ground beef with spices, served with yogurt, salad and rice. This was quite good. 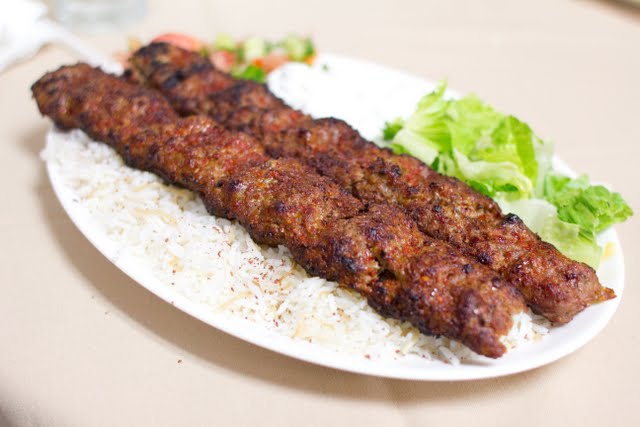 I chose to Alanazik kebab. I adored the presentation. The lamb pieces were quite tender. I wasn’t as fond of the eggplant puree surrounding it though. 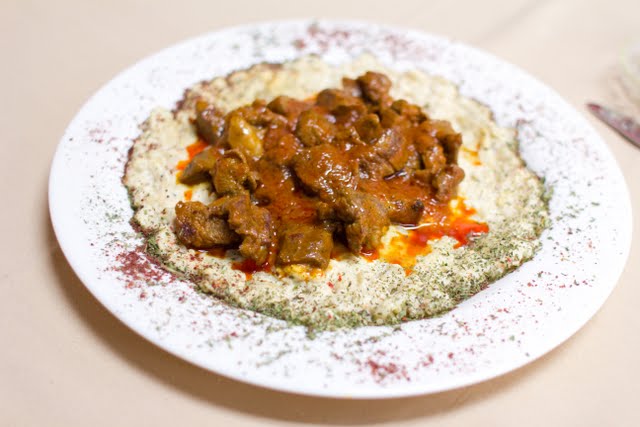 Steve ordered the kuzu sis, which is skewered lamb meat. A few pieces were a bit overcooked, but the center cut pieces were much more tender and moist. 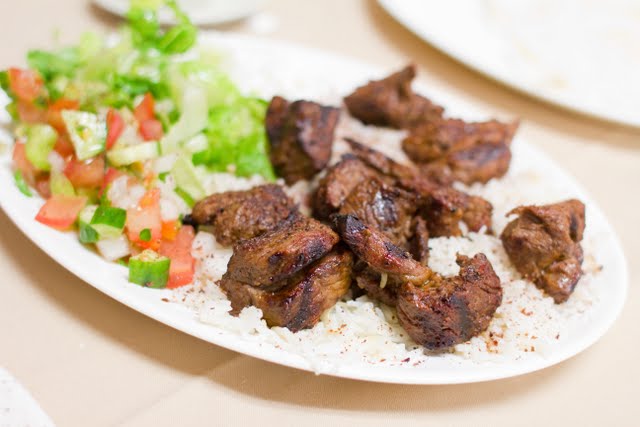 Our kebabs were accompanied with more lavas.

After our meal, we of course had to head over to the large baklava section.  They have various sized containers and they charge by the pound. I chose to try a few, including chocolate, kaymak (highly recommended by people on yelp, it is filled with a homemade cream, pistachio, and another one I can’t remember. I liked the kaymak one and the pistachio ones the best. 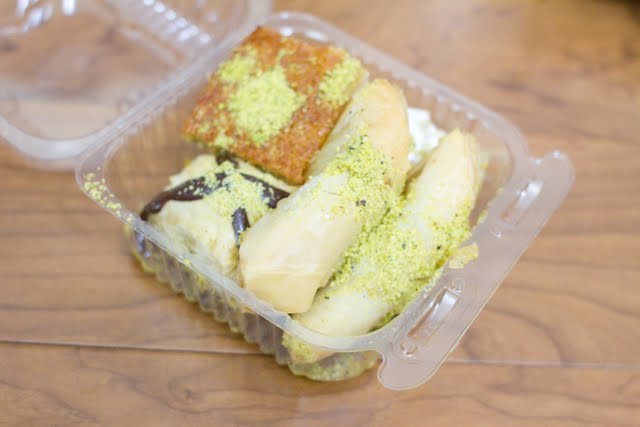 I also bought a few boxes of Turkish delight. I’ve been wanting the gummy-like candy ever since trying it on my trip to Seattle.

We left extremely happy with our meal. We will definitely be back to check out more of the menu.

12 comments on “Sultan Kebab and Baklava”