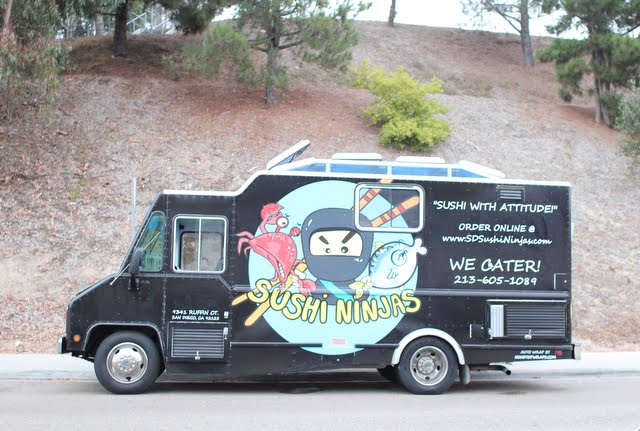 If you love sushi and you love a good bargain, check out Sushi Ninjas. Sushi Ninjas is a new food truck that recently debuted in San Diego. While I’ve been turned off by food trucks lately, Sushi Ninjas has renewed my excitement with their affordable prices and tasty rolls.

Update: A second piece on Sushi Ninjas with some different items is published here.

Sushi Ninjas is owned by best friends Danny Jeon, a UCSD graduate, and chef Jin Kim, who has worked in the sushi restaurant industry in Los Angeles and San Diego for over a decade.

Life is full of crazy coincidences. The other day I was driving home when this truck caught my attention. I noticed the illustration of a ninja with some sea creatures. Then I read the name “Sushi Ninjas,” which just so happen to combine FH’s two favorite things.

After I got home, I decided to look them up. I was checking out the menu on their website, when I noticed that their main page showed their latest tweets. And it just so happened that their tweet 1 minute ago was the following:

kirbiecravings KIRBIE!!!! we would love to have you stop by for a visit!

What the ?? I was a little stunned. I picked up my phone, and sure enough, they really had just tweeted me at the exact same moment I was browsing their site. What are the chances?

Well, with the shout-out, obviously I needed to pay them a visit.

I’ve mentioned a few times now that I’ve lost interest in food trucks. I’ve found that the majority of them overprice their food and a lot of it is just mediocre. Sushi Ninjas has decided to go the opposite route. Their mission is “to deliver the highest quality sushi for a very affordable price.” When I started browsing the menu I ended being shocked by the prices in a good way. Everything was priced lower than I expected. In fact, Sushi Ninjas offers some of the lowest prices I’ve seen for sushi in San Diego. We’re talking Sushi Deli-esque prices.

Probably the biggest price shocker was their sushi combo. Five pieces of nirigi and an eight piece spicy California roll for only $6.

For those feeling a little unsure about eating sushi off of a food truck, thanks to the know-how of marketing coordinator Jane Lee, who has a wide knowledge of the sushi industry from her working experience, Sushi Ninjas uses the same local provider that is used by most of the sushi restaurants in San Diego, including places like Blue Fin Fusion.

The next day, I went over and ordered my sushi. I watched as they made the sushi fresh after I ordered.  In addition to the sushi combo, the menu offers a variety of handrolls and cut rolls. All the rolls had mouthwatering descriptions and clever names (Afro Ninja, Jessica Albacore, and Kamikaze, to name a few). I had a hard time choosing only a few to order.

We ordered the sushi combo. I still can’t believe this was only $6. 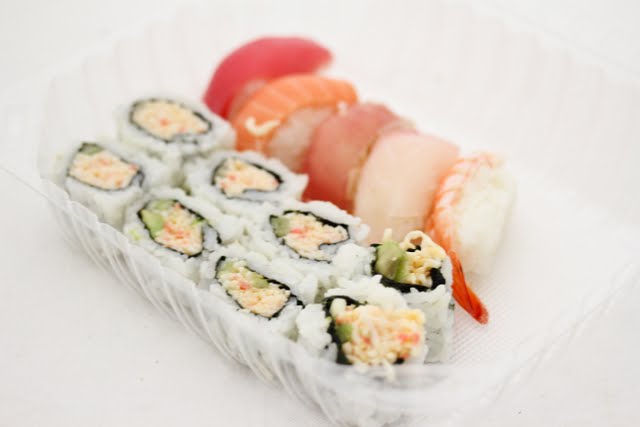 I thought the cuts of fish for this combo was decent. Not outstanding, but then it is only $6. It was fresh, decent, and filling. 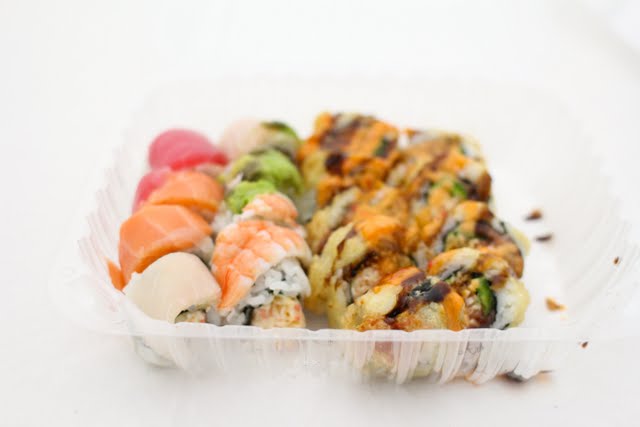 Because the containers were hard to see the sushi in the full details, I decided to take them out for better pictures. Plus some of them were so pretty. 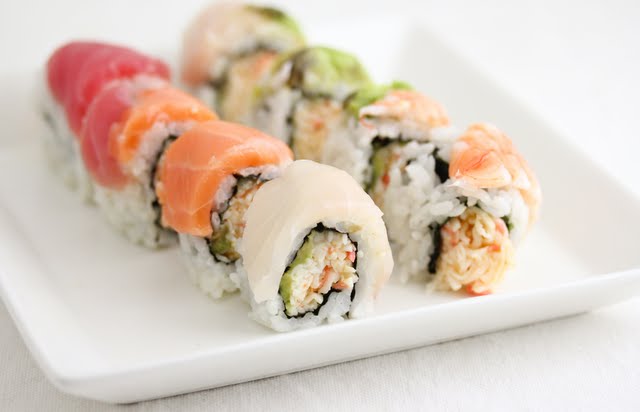 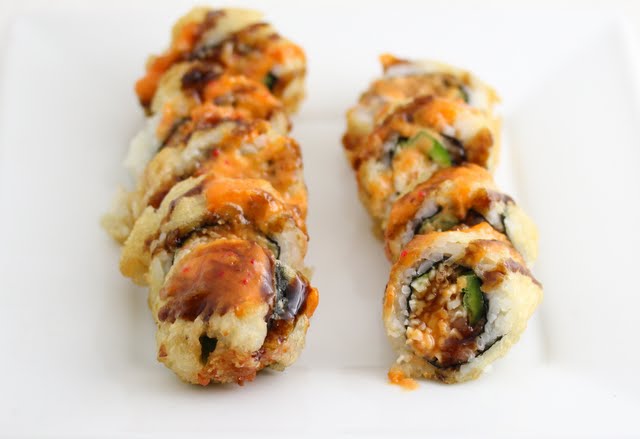 This was FH’s favorite. I liked it too. I had a hard time choosing a favorite because I liked all the rolls I tried. They were too different for me to choose my favorite.

Finally were ordered the Crispy Albacore and Serrano-Hamachi.(This was definitely too much food for the two of us, but there were so many things we wanted to try!) 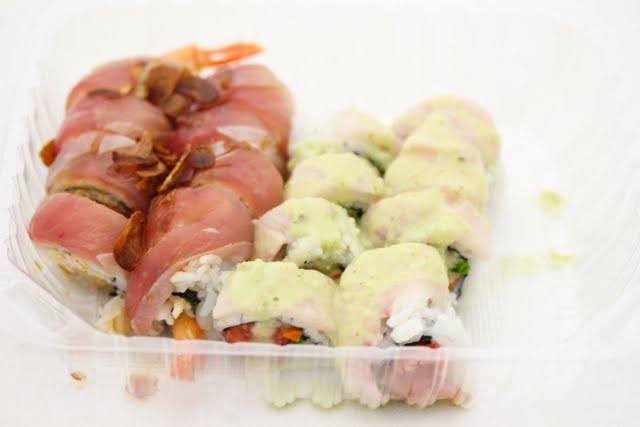 Cripsy Albacore. Stuffed with spicy crab, shrimp tempura, avocado, topped with albacore, crispy onions, garlic chips, and drizzled with ponzu. I really enjoyed the garlic chips. Normally I don’t eat garlic, but the fried garlic managed to be intense without being overwhelming. 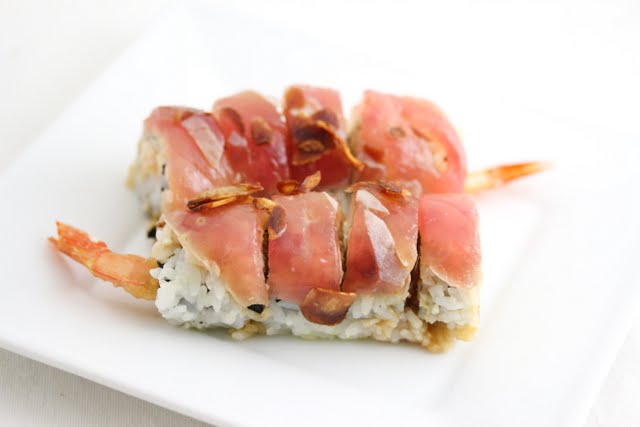 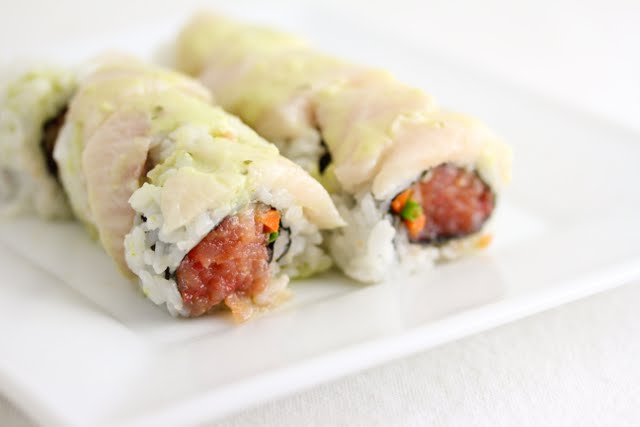 We both enjoyed the food here. We thought the rolls were creative and tasty and better than a lot of other restaurants in San Diego charging a lot more for similar quality rolls. We plan on stopping by here often.